A 37-year-old man with a five-year history of IV heroin abuse (sober for 10-years) presented with worsening epigastric pain, loss of appetite, nausea, and dark urine of one week duration. He did not have a primary care physician, and no other medical history was known. He denied any other symptoms and alcohol abuse. Vital signs were within normal limits. Physical exam was pertinent for exquisite tenderness to light palpation in the epigastric and right upper quadrant of the abdomen; there was no evidence of jaundice. Laboratory data revealed markedly elevated liver enzymes with alanine aminotransferase (ALT) of 3,153 U/L, aspartate aminotransferase (AST) of 2,489 U/L, and total bilirubin of 3.3 mg/dL, that was predominantly conjugated. Other laboratory studies, including complete blood count, serum lipase, and blood alcohol level, were within normal limits. Abdominal ultrasonography (Figure 1) was remarkable for a positive sonographic Murphy’s sign and showed marked gallbladder wall thickness of 6 mm (normal ≤ 3 mm) with pericholecystic fluid and no biliary calculi or sludge. 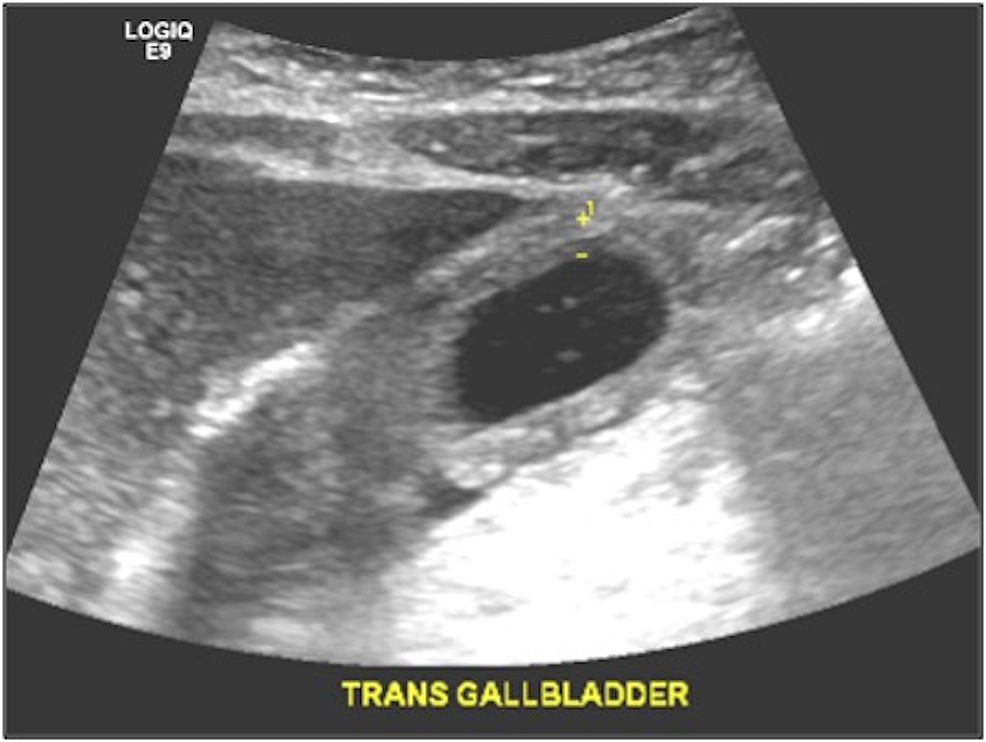 Although the predisposing cause was not clear, a working diagnosis of acalculous cholecystitis was formulated. Initial management with intravenous hydration, analgesics, and antibiotics was associated with a mild improvement in symptoms. However, the significantly elevated transaminase levels raised suspicion for a primary hepatic etiology. Viral serologies were obtained, which revealed positive IgM for HAV and CMV, consistent with an acute infection. The patient was treated with supportive therapy, antibiotics were discontinued, and the tentative plan of laparoscopic cholecystectomy was shelved in favor of conservative management of his coinciding acute viral syndromes. By day 4 of the hospitalization, the patient had shown remarkable improvement, with down-trending liver enzymes. He was subsequently discharged to the rehabilitation program on hospital day 5 in stable clinical condition.

Clinical symptoms include fever, nausea, jaundice, right upper quadrant pain, and a positive Murphy’s sign. The diagnosis is suspected on clinical presentation, and an ultrasound can be used for confirmation due to its high sensitivity, specificity, and accuracy. Laboratory data may show increased liver transaminases, total bilirubin, and alkaline phosphatase; however, normal levels do not rule out the disease. Ultrasonographic criteria for diagnosis include gallbladder distention, gallbladder wall thickening greater than 3.5 mm, no evidence of biliary sludge, no dilation of the intra- or extrahepatic bile ducts, and presence of pericholecystic fluid [5].

The case presented here is of an adult patient who presented with clinical symptoms consistent with acute cholecystitis, which was confirmed to be acute acalculous cholecystitis with the ultrasonographic examination. HAV infection was suspected and confirmed serologically due to the elevated liver enzymes. Incidentally, we found an acute CMV infection. Few cases have reported CMV-associated acalculous cholecystitis; however, these have been primarily in patients with acquired immunodeficiency syndrome or an immunocompromised state due to transplant [9]. While acute acalculous cholecystitis due to CMV is generally encountered in immunocompromised individuals, it is rare to encounter an immunocompetent patient with CMV-induced cholecystitis. Furthermore, concomitant infection with acute HAV and CMV as the etiology is rare. Since our patient did not have an immunocompromised state and demonstrated a quick recovery with conservative treatment, we focused on his HAV as the primary culprit. As HAV infection generally symbolizes a benign course, neither antibiotic treatment nor surgical intervention was needed to manage this patient.

© Copyright 2021
Hamid et al. This is an open access article distributed under the terms of the Creative Commons Attribution License CC-BY 4.0., which permits unrestricted use, distribution, and reproduction in any medium, provided the original author and source are credited.