On January 30, 2020, the World Health Organization (WHO) declared the severe acute respiratory syndrome coronavirus 2 (SARS-CoV-2) pandemic a worldwide emergency. Worldwide there have been 170 million cases of the resulting disease coronavirus 2019 (COVID-19), of those, 3.53 million have resulted in death. The Food and Drug Administration (FDA) with Mayo Clinic as the lead institution authorized COVID-19 convalescent plasma (CCP) for treatment of SARS-CoV-2 infection. Effective therapeutic window for CCP administration had yet to be defined. We addressed this gap by characterizing longitudinal biologic response and clinical outcomes of COVID-19 patients treated with CCP. Primary outcome was discharged to home/home health.

On January 30, 2020, the World Health Organization (WHO) declared the severe acute respiratory syndrome coronavirus 2 (SARS-CoV-2) pandemic a worldwide emergency. Worldwide there have been 114 million cases of the resulting disease coronavirus 2019 (COVID-19) of those, 2.54 million have resulted in death. At pandemic debut, available treatment was limited to supportive care as no approved therapy or vaccination was available. This treatment vacuum motivated the utilization of convalescent plasma infusion to complement the antibody response.

Passive immunization has been successfully used to treat infectious diseases since the 1890s [1,2]. Convalescent plasma (CP) was used to treat Spanish Influenza A (H1N1), severe acute respiratory syndrome in 2003 caused by SARS-associated coronavirus (SARS-CoV), and Influenza A pandemic in 2009 [3,4]. Underpinning CP treatment is that subjects recovering from viral infection marshalled an effective antibody response. And donated CP administered to an infected individual anticipating transfused antibodies would affect sufficient passive immunity to reduce symptoms and mortality risk.

The Food and Drug Association (FDA) with Mayo Clinic as the lead institution authorized COVID-19 convalescent plasma (CCP) for treatment of CoV-2 infection. Effective therapeutic window for CCP administration had yet to be defined. We addressed this gap by characterizing longitudinal biologic response and clinical outcomes of COVID-19 patients treated with CCP.

This retrospective longitudinal study analyzed electronic medical record data, including but not limited to characteristics and laboratory test findings from 197 patients consecutively admitted between March 28 and August 5, 2020. Among those, 92 and 105, respectively, received CCP infusion within 48h of versus 48h after hospitalization. Primary outcome was discharged to home/home health and secondary outcome was longitudinal CRP levels post CCP infusion.

Enrolled patients were at least 18 years old with laboratory confirmed SARS-CoV-2 infection admitted for treatment of severe or life-threatening COVID-19. Severe disease was defined as the presence of at least one of the following characteristics: dyspnea, respiratory rate of 30 breaths per minute or more, oxygen saturation (SpO2) equal to or less than 93%, partial pressure of arterial oxygen to fraction of inspired oxygen less than 300 or development of lung infiltrates with more than 50% involvement within 24-48 hours (h). Life-threatening disease was defined as the development of at least one of the following: respiratory failure, septic shock or multiple organ dysfunction or failure. 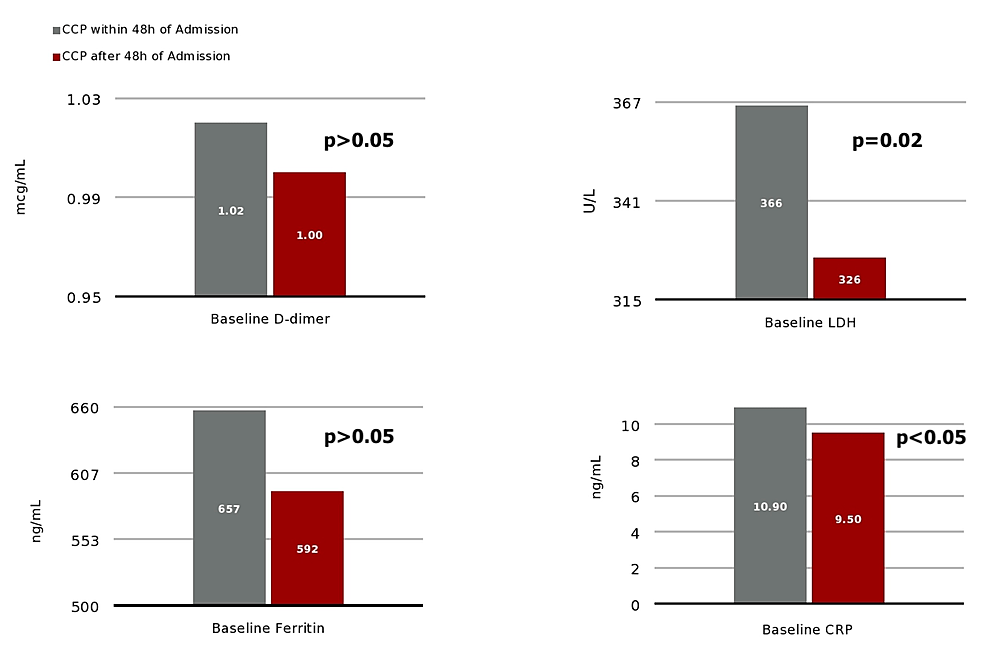 Figure 1: Baseline values for D-dimer, LDH, ferritin and CRP, respectively, for patients who received CCP within 48h of admission vs. 48h after admission. 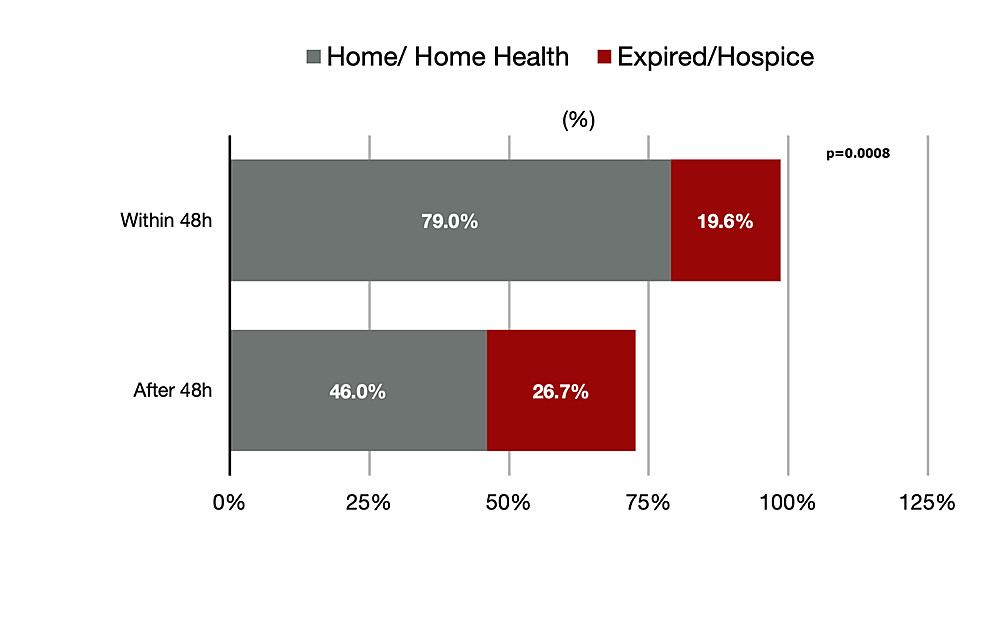 Between March 28 and August 5, 2020, Sarasota Memorial Hospital participated in the Mayo Clinic-led national FDA expanded access program providing access to convalescent plasma protocol. Throughout this period, data from 197 participants were analyzed and contrasted among those who received CCP infusion within or more than 48h after admission with a confirmed COVID-19 infection. We observed a post-CCP reduction in C-reactive protein, lower hospital length of stay and increase in discharge directly from hospital to home/home health in patients who received CCP within 48h of admission rather than later in hospitalization. Moreover, earlier CCP treatment resulted in 7% fewer patients who died or were discharged to hospice.

In December 2019, a new member of Coronaviridae family, SARS-CoV-2 was detected in Wuhan, China primarily manifesting as a respiratory illness [3]. Since then, multiple studies have been conducted exploring varied treatments for this lethal disease which has led to nearly 114 million of positive COVID-19 cases and 500,000 deaths in the United States. Presented with state of emergency accompanied by no available treatment and scarce medical resources; multiple centers around the world instituted CCP in a relatively timely manner previously shown effective during the SARS-CoV and Spanish Flu pandemic [3].

Initial evidence demonstrated CCP to be most beneficial when administered soon after SARS-CoV-2 infection. A randomized, double-blinded, placebo-controlled trial evaluated disease progression in 80 patients who received convalescent plasma within 72h after onset of mild COVID-19 symptoms vs. placebo [9]. Disease progression was advancement to severe respiratory disease defined as respiratory rate more than 30 breaths per min and/or arterialized blood oxygen saturation less than 93% breathing ambient air. Of the 80 patients, 31% of the patients who received placebo vs. 16% who received CCP progressed to severe respiratory disease [9]. Life-threatening respiratory disease was observed in only 5% of CCP patients vs. 12% in the placebo group. This study concluded that the administration of CCP to infected patients within 72h after the onset of symptoms reduce the risk of progression to severe respiratory disease by 48% [9]. CCP has demonstrated benefit in the clearance of SARS-CoV-2 in individuals who are symptomatic with COVID-19, including immunocompromised patients [8,10,11,12]. A cohort study of 966 patients with hematologic cancer and COVID-19 showed that after CP treatment, there was a significantly improved 30-day mortality [13].

CCP transfusion is associated with a reduction in inflammatory markers, such as CRP [8,10,14]. In a case series, 20 patients were treated with CCP compare to 20 controls matched with severe or life-threatening COVID-19 infection [15]. Results showed a marked reduction in CRP levels seven days after CCP infusion compared to control group. Discharges were similar amongst both groups, but mortality was higher in the control group. No patient died if they received CCP prior to seven days of hospitalization [15]. Another study reported lack of benefit when CCP was administered later (median of 21.5 days after diagnosis) for SARS-CoV-2, which supports that earlier treatment may be of critical importance [16]. Our longitudinal CRP observations corroborate and extend evidence favoring least “door to treatment” time.

Our data should be interpreted with some caveats. We conducted a monocenter pragmatic investigation. CCP was administered before FDA required titer labeling. Therefore, we couldn’t establish if antibody titers in CCP transfused across patient groups were equivalently distributed. In addition, SARS-CoV-2 serologic testing was unreliable restricting the assessment of whether a patient exhibited an impaired humoral response.

Our study was conducted while no anti-viral treatment was approved by the FDA for patients hospitalized with COVID-19. We evince CCP treatment within 48h of admission was associated a reduction in hyperinflammation and hospital length of stay in patients more obese with higher LDH levels with greater benefit for discharge to home/home health benefit and reduction in composite outcome of hospital mortality or discharge to hospice. Convalescent plasma has shown to be an effective treatment when given soon after SARS-CoV-2 infection. Unfortunately, in hospitalized patients with COVID-19, infusion of CCP late in the course of illness provides no observed benefit, as reported with other anti-viral agents.

Human subjects: Consent was obtained or waived by all participants in this study. Mark J. Magenheim, MD MPH, Medical Director IRB and Ashley Butler, CIP, Coordinator of the Institutional Review Board issued approval 21-COVID-30. Thank you for your submission of New Project materials for this research study. This research study qualifies for Expedited Review, as it involves no greater than minimal risk to subjects, and involves a retrospective review of medical records. The primary purpose of this study was to assess the relative impact of time from hospitalization to infusion of convalescent COVID-19 antibody-positive plasma (CCP) versus putative blood biomarkers of inflammation and organ injury evoked by patients hospitalized with a CoV-2 infection. Sarasota Memorial Hospital Institutional Review Board has APPROVED your submission. This approval is based on an appropriate risk/benefit ratio and a study design wherein the risks have been minimized. All research must be conducted in accordance with this approved submission. Animal subjects: All authors have confirmed that this study did not involve animal subjects or tissue. Conflicts of interest: In compliance with the ICMJE uniform disclosure form, all authors declare the following: Payment/services info: All authors have declared that no financial support was received from any organization for the submitted work. Financial relationships: All authors have declared that they have no financial relationships at present or within the previous three years with any organizations that might have an interest in the submitted work. Other relationships: All authors have declared that there are no other relationships or activities that could appear to have influenced the submitted work.

The authors would like to thank Sarasota Memorial Hospital and the Internal Medicine Residency for all their contributions in making this manuscript possible.

© Copyright 2021
Lattanzio et al. This is an open access article distributed under the terms of the Creative Commons Attribution License CC-BY 4.0., which permits unrestricted use, distribution, and reproduction in any medium, provided the original author and source are credited.

Figure 1: Baseline values for D-dimer, LDH, ferritin and CRP, respectively, for patients who received CCP within 48h of admission vs. 48h after admission.