A 66-year-old male with a past medical history of hypertension, stroke, and ventral septal defect requiring surgical repair presented to the emergency department with a complaint of substernal and left-sided chest pain. The chest pain, which was provoked by activity, had been present for several months with each episode typically lasting only for a few seconds. However, over the last week, episodes had gradually worsened and lasted for 15 to 20 minutes at a time. Electrocardiogram (ECG) in the emergency department demonstrated sinus rhythm with wide QRS complexes and deeply inverted T waves. Cardiology was consulted for this patient and a transthoracic echocardiogram was performed (Figure 1).

The echocardiogram was difficult to perform as the patient had underlying scoliosis, which limited the operator's ability to fully assess the heart. The ejection fraction was 50-55%, the ventricular septum was hypertrophied, and a patch along the membranous portion of the ventricular septum without residual shunt was seen consistent with a reported history of surgical repair. The right heart was difficult to assess, but the right ventricle appeared markedly enlarged with diffuse trabeculations and hypokinesis. The cardiologist team was concerned for noncompaction of the right ventricle or arrhythmogenic right ventricular dysplasia (ARVD). Cardiac MRI was requested for further evaluation (Figure 2). 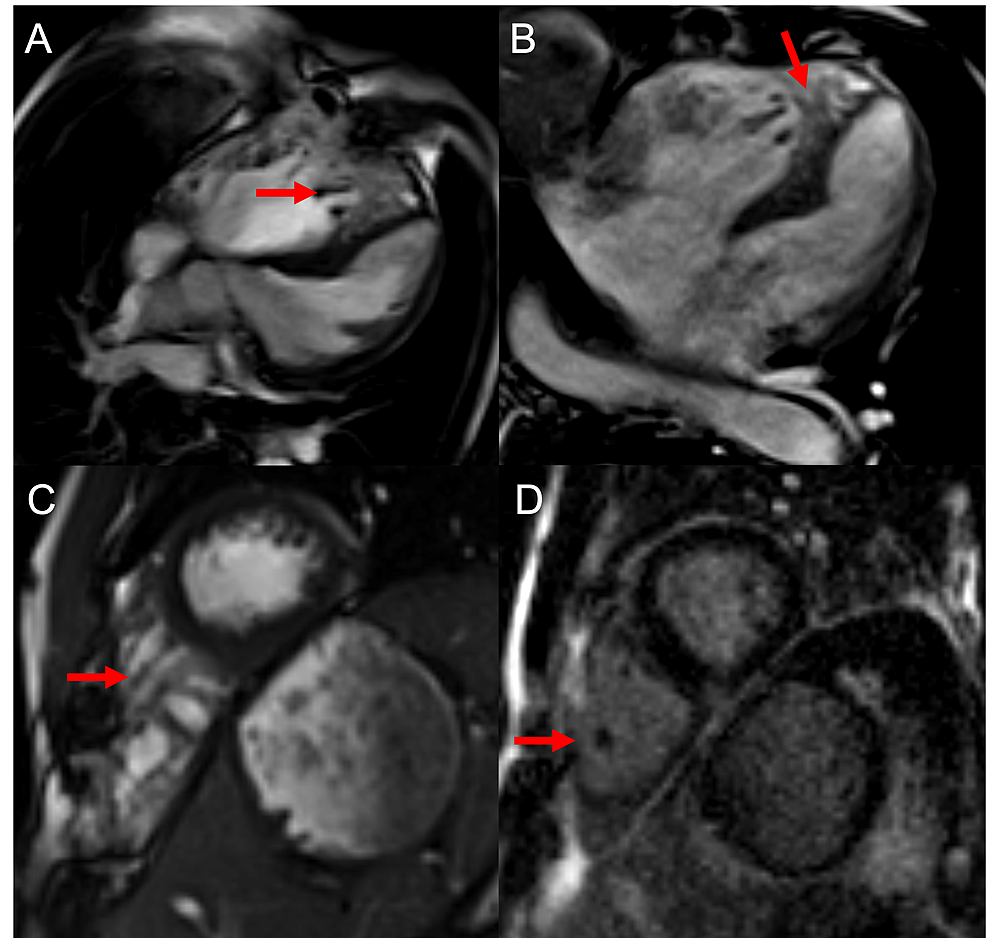 Cardiac MRI demonstrated a thickened septal wall with patch repair consistent with past surgery and an enlarged right ventricle with global hypokinesis, corroborating the findings on the echocardiogram. The right ventricular trabeculae extending towards the cardiac apex demonstrated a thickened appearance measuring up to 3.4 cm. There was no delayed enhancement to suggest fibrosis nor area of focal dilatation, which are key features that exclude ARVD. In addition, tricuspid valve annular motion was normal, and no regional wall motion abnormalities were identified, which also excluded ARVD as a potential diagnosis. A diagnosis of right ventricular noncompaction was made. The patient would be optimized medically and discharged in stable condition with appointments to follow-up in the outpatient cardiology clinics.

MRI has been used as an effective means of diagnosing left ventricular noncompaction and it provides an adequate correlation of findings from echocardiography [8,16]. It is also useful in cases that have poor or limited echocardiographic images, which was the case with our patient [8]. T2-weighted and contrast-enhanced images allow for better discrimination between compact and noncompact inner and outer layers of the myocardium [16]. The signal intensity of MRI can also be used to identify damaged areas of the myocardium that may be a nidus for fatal arrhythmias [8,16]. In our case, MRI was used to rule out the presence of ARVD. The right ventricular free wall was not abnormally thickened but rather there was an abundance of noncompacted trabeculations. MRI has also been shown to effectively diagnose cases of left ventricular noncompaction based on a ratio of compacted to noncompacted myocardium; a diastolic ratio of >2.3 had a sensitivity and specificity of 86% and 99%, respectively for diagnosing the condition [17]. However, this ratio is not well applied to the right ventricle as there are inherent differences between right and left heart anatomy and physiology. In addition, cardiac MRI may be used to allow the clinician to effectively stage the condition by interpreting the degree of trabecular delayed hyperenhancement on MRI with a 16-segment model [18].

© Copyright 2021
Montanarella et al. This is an open access article distributed under the terms of the Creative Commons Attribution License CC-BY 4.0., which permits unrestricted use, distribution, and reproduction in any medium, provided the original author and source are credited.