Salmonella is an uncommon cause of meningitis, especially after neurosurgery. Here, we present a case of Salmonella meningitis after craniotomy, likely due to physical contact with a snake after surgery, with contiguous spread from the patient’s hand to her wound. The purpose of this report is to serve as a reminder that patients undergoing neurosurgery should avoid contact with pets, including snakes and other reptiles, in the postoperative period and practice good hand hygiene.

A 24-year-old woman presented to our hospital with a non-enhancing, right frontal lobe mass. She underwent uncomplicated right frontal craniotomy for resection of a World Health Organization (WHO) grade II astrocytoma. Postoperative magnetic resonance imaging (MRI) showed a near-total resection. Her hospital course was uneventful and she was discharged on a three-week dexamethasone taper. However, on postoperative day 13 she developed sudden fever, headache, nausea, and vomiting.

At an outside emergency room she was febrile with neck stiffness. She was treated empirically with vancomycin and piperacillin and tazobactam before transfer to our hospital. On arrival, an MRI of her brain showed peripheral contrast enhancement and slight enlargement of the resection cavity, an extra-axial fluid collection, and a subgaleal fluid collection with peripheral enhancement (Figure 1). Antibiotics were changed to vancomycin and cefepime. Fluid was aspirated from the subgaleal fluid collection and the gram stain revealed gram-negative rods. 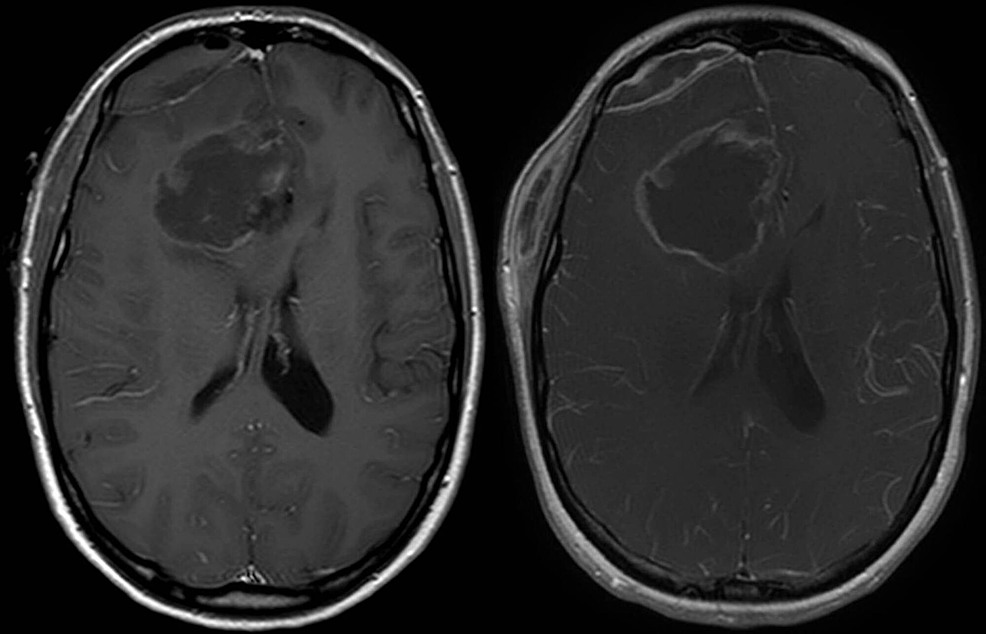 On the left, immediate postoperative axial T1 weighted MRI with contrast. On the right, at presentation axial T1 weighted MRI with contrast showing peripheral enhancement and enlargement of the resection cavity, as well as extra-axial and subgaleal fluid collections with peripheral enhancement. MRI - magnetic resonance imaging.

The patient was taken to the operating room immediately for washout. Purulent material was noted in the subgaleal and epidural space. The fluid aspirated from the resection cavity appeared to be consistent with cerebrospinal fluid (CSF) with old blood products without any evidence of purulence. Cultures were obtained from the subgaleal and epidural fluid collections as well as from the resection cavity fluid. Cultures from all spaces grew Salmonella group D non typhi. The blood cultures were also positive for Salmonella group D non typhi.

Postoperatively, the patient reported that she had handled a pet snake during a family visit five days following her original craniotomy. Upon questioning, she specifically remembered eating fruit without washing her hands following the encounter with the snake. She denied any preceding diarrheal illness, high-risk food intake, travel, or sick contacts. The Infectious Disease service was consulted and she was recommended six weeks of intravenous ceftriaxone followed by oral sulfamethoxazole and trimethoprim.

She was briefly re-hospitalized with fever, rash, and cervical lymphadenopathy after completing intravenous antibiotics and starting sulfamethoxazole and trimethoprim. Her symptoms improved after stopping sulfamethoxazole and trimethoprim, and she was discharged on oral levofloxacin to complete a three-month course of antibiotics. She also required a wound revision for a small dehiscence of her wound after completion of antibiotic therapy and nine months after surgery. The skin was noted to be very thin in the area of the dehiscence without any evidence of erythema. No purulence was noted and intraoperative cultures were negative. Her most recent MRI shows no new enhancement, reduced diffusion, or other evidence of infection.

Salmonella species are flagellated, facultative, anaerobic gram-negative bacilli. Although there are more than 2,000 Salmonella serotypes, clinical laboratories utilize the bacteria’s polysaccharide O-antigen to designate Salmonella into subgroups A through E. Salmonella type D nontyphi includes S. enteriditis, the most commonly identified Salmonella serotype. Foodborne transmission is responsible for the majority of cases, but it may also be transmitted after physical contact with reptiles, including snakes [3].

Reptiles, such as snakes, are commonly colonized with Salmonella both in their digestive tracts and on their skin. Transmission of Salmonella to humans following contact with reptiles is well recognized. Although this was the presumed transmission route in our patient, definitive proof would have required culturing the same serotype of Salmonella from the snake as was found in our patient, something we were not able to obtain.

Traditionally, vancomycin and cephalosporins have been used to treat meningitis empirically after neurosurgery. Cephalosporins, including ceftriaxone and cefepime, cover the majority of Salmonella isolates. Patients treated with third-generation cephalosporins generally have excellent outcomes due to their reliable central nervous system (CNS) penetration.

© Copyright 2017
Byer et al. This is an open access article distributed under the terms of the Creative Commons Attribution License CC-BY 3.0., which permits unrestricted use, distribution, and reproduction in any medium, provided the original author and source are credited.

On the left, immediate postoperative axial T1 weighted MRI with contrast. On the right, at presentation axial T1 weighted MRI with contrast showing peripheral enhancement and enlargement of the resection cavity, as well as extra-axial and subgaleal fluid collections with peripheral enhancement. MRI - magnetic resonance imaging.

Role of Morphological and Hemodynamic Factors in Predicting Intracranial Ane ...

Now You See, Now You Don’t: A Case Of Spontaneous Regression of Pituitary Tumour