Sickle cell disease (SCD) is an autosomal recessive disease resulting in hemolytic anemia and recurrent vaso-occlusive events. Consequently, it can result in a broad range of functional and structural renal and cardiac alterations. Chronic kidney disease (CKD), in SCD, is associated with proteinuria, microalbuminuria, and hemoglobinuria. Cardiac complications in SCD include pulmonary hypertension, left ventricular diastolic heart disease, dysrhythmia, and sudden death. In patients with advancing age, cardio-renal dysfunction can have substantial effects on morbidity and mortality. Our primary aim was to compare the incidence of major adverse cardiac events (MACE) and all-cause mortality in sickle cell nephropathy (SCN).

In this retrospective study, we used International Classification of Diseases (ICD)-10 codes to identify admissions in 2019 with a diagnosis of MACE with a prior diagnosis of SCD and/or SCN. Our search of the HCA Healthcare Enterprise Data Warehouse for adult patients >18 years yielded 6,693 patients with SCD, of which 658 patients (9.8%) had SCN. Primary endpoints were incidence of MACE and all-cause mortality. Patients with MACE encompassed those with nonfatal stroke, nonfatal myocardial infarction, and congestive heart failure (CHF) exacerbations. A secondary endpoint was length of stay (LOS). Logistic regression analysis was used for MACE and all-cause mortality. LOS was analyzed using multiple linear regression analysis. Results were considered statistically significant for analyses showing p <0.05. All outcomes were adjusted for demographic variables and comorbidities.

Sickle cell disease (SCD) is a hematologic disorder caused by a single base-pair mutation in the gene for the beta-globin chain of adult hemoglobin (HbS) [1]. The disease is characterized by sickle shaped erythrocytes induced by tissue hypoxia or dehydration, leading to vaso-occlusion and hemolytic anemia [2].

The rich vascularity in the kidney coupled with low oxygen tension may make it more susceptible to sickle cell damage, leading to devastating effects, which include sickle cell-induced renal failure and sickle cell nephropathy (SCN) [2]. Microalbuminuria, an early manifestation of SCN, is prevalent in nearly 60% of patients aged >45 years but only 4%-12% of patients will develop serious, life-threatening end-stage renal disease [6]. Serial monitoring of the estimated glomerular filtration rate (eGFR) allows for evaluation of the progression of SCN. Rapid decline in eGFR has been associated with higher systolic blood pressure and proteinuria [7].

Cardiovascular disease was the most common cause of death in SCD patients from 1999-2009 [8,9,10]. Major adverse cardiac events (MACE) associated with SCD include cardiomyopathy, hypertension, heart failure, myocardial infarction, arrhythmias, and sudden death [11,12]. The spectrum of functional and structural renal and cardiac alterations in sickle cell hemoglobinopathy is broad; however, morbidity and mortality from end-organ dysfunction, especially cardio-renal dysfunction, are substantial [13].

SCD patients have elevated levels of systemic inflammatory biomarkers that suggest a tendency towards endothelial dysfunction, cardiovascular and thromboembolic risk [14]. CKD is a well-defined risk factor for cardiovascular events, but the characterization of a potential additional cardiovascular risk in the population with SCD and CKD has not been defined [15]. This study aims to compare all-cause mortality and incidence of MACE in SCN.

In this retrospective study, we evaluated adult patients (age ≥18 years) hospitalized with a diagnosis of MACE with a prior diagnosis of SCD and SCN during 2019 (n = 6,693). To acquire the dataset, we used International Classification of Diseases (ICD)-10 codes to query the HCA Healthcare Enterprise Data Warehouse, which encompasses 186 hospitals in 21 states across the United States. Patients younger than 18 years or undergoing outpatient surgery were excluded. This study received an institutional IRB exempt determination (2019-517). 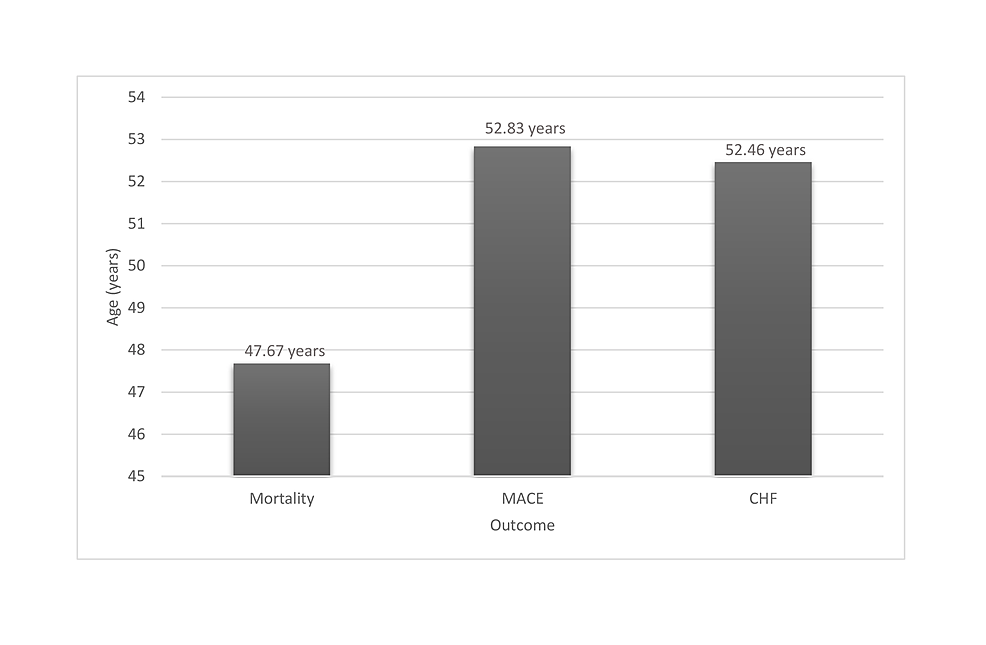 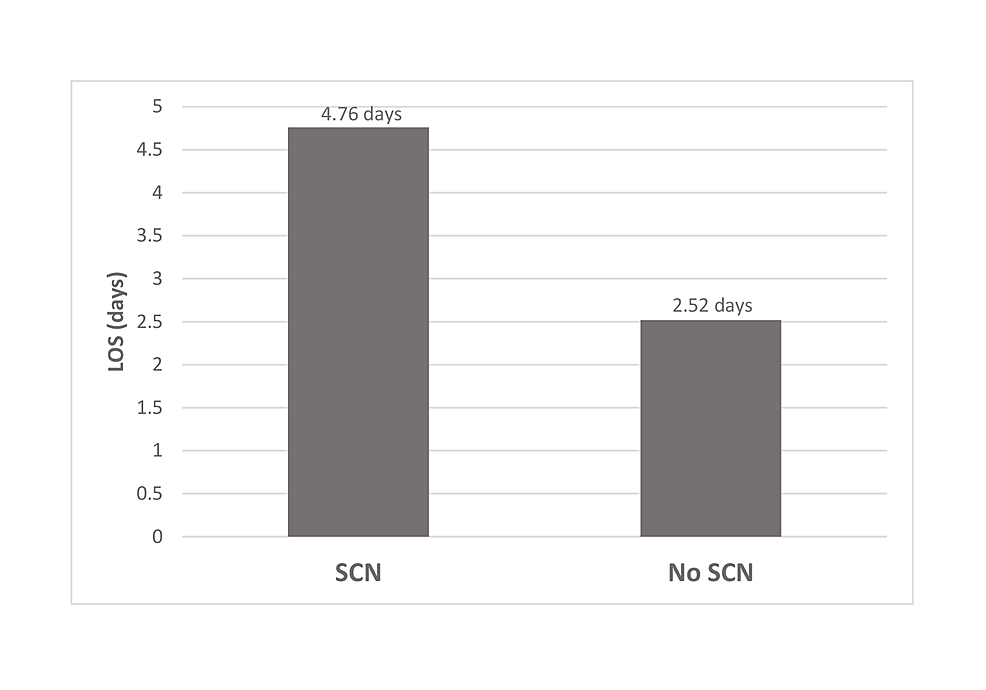 Figure 2: Length of stay of patients with and without sickle cell nephropathy

Table 2: Odds ratio for mortality, CHF and MACE comparing patients with and without sickle cell nephropathy

This retrospective cohort study compared the incidence of MACE and all-cause mortality in patients with SCN. The key findings show that patients with nephropathy did not have a significant increase in MACE; however, these same patients had a significant increase in mortality, such that they were 2.3 times more likely to die when compared to patients without nephropathy. It has been well established in the literature that repeated vaso-occlusive crises are responsible for SCN that may range from renal dysfunction to CKD [2]. In addition, an association has been suggested between glomerulosclerosis and atherosclerosis [16]. The pathogenic process of oxidative stress atherosclerosis augments the progression of activated macrophages with foam cell formation that contribute to both the progression of glomerulosclerosis and atherosclerosis [17]. Evidence from transgenic, sickle cell mice supports the association between progression of renal disease and cardiovascular disease due to nitric oxide-mediated oxidant stress injury [18]. These data suggest that preventive strategies for cardiovascular disease and atherosclerosis may prevent the progression of kidney disease.

While subclinical renal abnormalities begin at an earlier age, end-stage renal disease in SCN usually occurs between the third and fifth decades of life [19,20]. Platt et al. reported an 18% mortality for SCD patients with organ dysfunction, particularly renal dysfunction. Notable predictors of mortality include progression of renal disease, severe anemia, seizures, acute chest syndrome, and more symptomatic disease [21]. Similarly, Hamideh and Alvarez reported mortality in 16.4% of patients with renal disease [10]. In a prospective study following 105 patients over five years, Galloway-Blake et al. reported a 38% mortality rate (40 out of 105 patients) for patients with SCD [22]. In our study of 6,693 SCD patients, we found an increased OR for mortality, which agrees with the aforementioned studies. We found that the average age for mortality was 47.67 years (Figure 1). This roughly agrees with the previously published data, which noted an average age of death at 35-44 years for males and 45-54 years for females [10,21].

When examining the impact of SCN on the duration of hospitalization, we did not observe a significant association between SCN and LOS. On the contrary, Yeruva et al. observed a 1.6-day increase in LOS for SCD patients diagnosed with CKD and 3.2 days for acute renal failure (ARF) [26]. In present-day medicine, LOS is a relevant topic due to the importance given to cost-effective high-value care. The chronicity of renal disease in SCD raises concern for high economic burden [27-29].

Our study has some potential limitations. Patients were identified using discharge ICD-10 codes through an electronic administrative database. The accuracy of the ICD-10 codes is influenced by several factors, including quality of communication between physicians and patients, clinicians’ expertise and precision of the diagnoses in medical records as well as coders’ experience and attention to choosing the best code. Hence, as an administrative database, the HCA Healthcare Electronic Data Warehouse may have variations in the degree of detail and accuracy. Additionally, this study had an intrinsic limitation for having a retrospective design with only one year of data collection, which may have affected its results.

© Copyright 2021
Udani et al. This is an open access article distributed under the terms of the Creative Commons Attribution License CC-BY 4.0., which permits unrestricted use, distribution, and reproduction in any medium, provided the original author and source are credited.

Figure 2: Length of stay of patients with and without sickle cell nephropathy

Table 2: Odds ratio for mortality, CHF and MACE comparing patients with and without sickle cell nephropathy