The prevalence of recurrent and residual aneurysms following Woven EndoBridge (WEB) treatment is not insignificant. The goal of this systematic review was to evaluate retreatment methods for such aneurysms and their outcomes. PubMed, Embase, and Scopus databases were systematically searched, and results were reported according to the PRISMA (Preferred Reporting Items for Systematic Reviews and Meta-Analyses) guidelines. Original studies reporting on aneurysms that were retreated after WEB were included. Sixteen studies (n = 901 aneurysms), of which three were prospective, reported on retreated aneurysms following initial WEB treatment. Of those 901 aneurysms, on average 18.7 ± 11.5% were recurrent or residual at the last follow-up and 10.7 ± 11% required some form of retreatment. When compared to WEB-IT (WEB Intra-saccular Therapy) data, retreated aneurysms were more likely to be large in size (p < 0.0001) and more likely to have been initially treated with the WEB dual-layer configuration. The mean age of those with retreated aneurysms was 58 ± 5.7 years old, and the mean size of aneurysm dome was 11.1 ± 5.5 millimeters. Majority (34.1%) of the aneurysms were located at the basilar apex. Retreatment modalities included coiling (20%), stent-assisted coiling (38.7%), additional WEB device (13.3%), flow diversion (16%), and clipping (12%). Majority of retreated cases had favorable outcomes, with 96.4 ± 13.4% of the cases demonstrating technical success and 90.5 ± 18.2% having adequate occlusion at the last follow-up. Our systematic review suggests that retreatment of recurrent and residual aneurysms after initial WEB treatment is feasible. Future prospective studies would be helpful in validating these results.

The field of neuroendovascular aneurysm treatment has been rapidly evolving, with some of the most recent advancements being in the field of flow diversion. Despite the well-known techniques such as balloon and stent-assisted coiling for wide neck bifurcation intracranial aneurysms, treatment of these aneurysms has often carried its challenges. Intra-saccular flow diversion is the most recent advancement in technology for the treatment of such aneurysms. Woven EndoBridge (WEB; Sequent Medical, Aliso Viejo, CA, USA), a nitinol-based self-expanding mesh implant, is the only FDA-approved intra-saccular flow diverter device on the market today for the treatment of wide neck bifurcation aneurysms. In 2018, it was approved by the FDA to be used in adults with wide neck bifurcation aneurysms at middle cerebral artery (MCA) bifurcation, internal carotid artery terminus (ICA-T), anterior communicating artery (ACOM) complex, and basilar artery apex [1].

Despite WEB’s safety and efficacy, a significant percentage of aneurysms recanalize after initial WEB implantation [2-4]. Because of this, it is imperative to be familiar with the retreatment strategies that can be helpful in managing these aneurysms. To this day, a systematic review focusing on retreated aneurysms following initial WEB therapy has not been completed; thus, the aim of this systematic review was to explore the evidence in the current literature reporting on retreatment strategies for such aneurysms and their subsequent outcomes.

The search strategy in this systematic review was conducted and reported according to the PRISMA (Preferred Reporting Items for Systematic Reviews and Meta-Analyses) guidelines [5]. The authors performed a comprehensive search of MEDLINE, Embase, and Scopus databases on August 24, 2020. Keywords or MeSH terms such as “recurrent aneurysms” OR “residual aneurysms” OR “recanalized aneurysms” OR “aneurysms” AND “WEB” or “woven endobridge” AND “coiling” OR “clipping” OR “management” OR “treatment” OR “embolization” OR “flow diversion” OR “retreatment” OR “re-treatment” were used for the search strategy.

Results were limited to original studies pertaining to humans only. Retrospective and prospective studies mentioning retreatment of intracranial aneurysms following initial WEB treatment were eligible for inclusion after the duplicates were removed. Case reports, commentaries, conference abstracts, editorials, letters, reviews, systematic reviews, meta-analyses, and non-English language studies were excluded from this systematic review. Studies without extractable or sufficient data were also excluded. For the statistical analysis portion, the retreated aneurysm cohort was compared to one of the largest prospective multicenter studies performed on WEB, the WEB Intra-saccular Therapy (WEB-IT) study [6].

Data points such as demographic data, technical success of WEB implantation defined as feasibility of correctly implanting WEB device into an aneurysm without having to abort the procedure, complete or adequate (only neck remnant) endovascular aneurysmal occlusion, complications, mortality, proportion of recurrent or residual aneurysms, and proportion of retreated aneurysms were collected. The retreated aneurysm group was further assessed, and data on retreated aneurysm location, type of WEB configuration used, type of retreatment method used, and outcomes following retreatment were retrieved. A standardized computerized spreadsheet was used to collect the information from the included studies.

After designing the search strategy, a total of 212 records were identified, with 80 in PubMed, 71 in Embase, and 61 in the Scopus database (Table 1). No additional articles were identified when searching through the reference lists. After duplicates were removed and the records were initially screened by title and abstract, 41 full-text articles were then assessed for eligibility. Of those, 16 studies were found to report on retreated aneurysms after WEB therapy and those 16 studies were eligible for the systematic review (Figure 1) [7-22]. 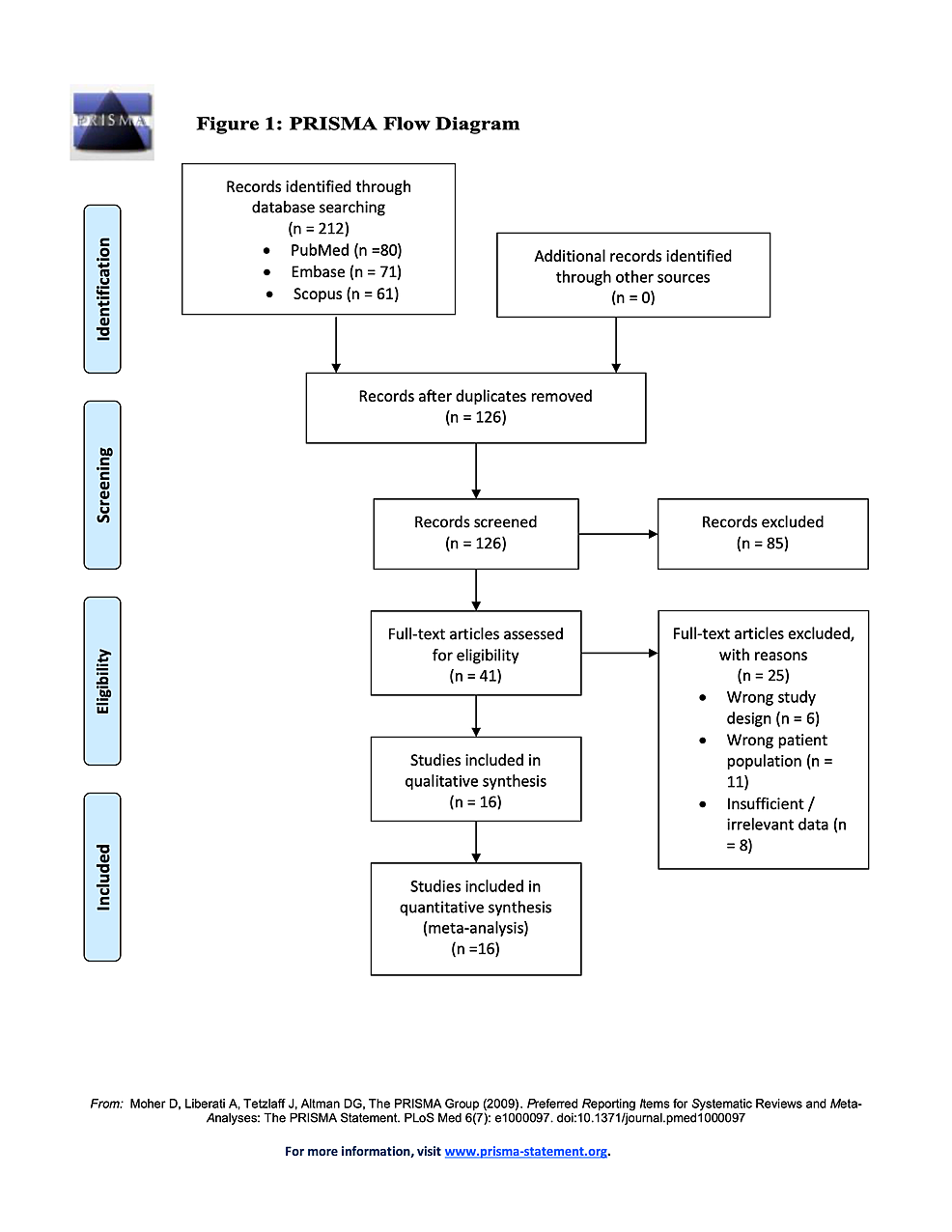 A total of 16 studies, of which three were prospective and the rest were retrospective in design, had a total of 901 WEB cases performed and reported on retreatment following initial WEB therapy (Table 2). Of those 16 studies, the mean age was 57.8 ± 2.4 years old, and 71.1 ± 7.3% were female. The mean technical success rate of WEB placement was high and was achieved in 96.5 ± 3.9% of the cases. Mean adequate aneurysm occlusion was observed in 83 ± 9.6% of the cases at the last follow-up. Mean mortality was seen in 3.2 ± 4.6% of the cases, and mean thromboembolic complication rate was 9.2 ± 4%. There were 18.7 ± 11.5% cases of either recurrent or residual aneurysms following initial WEB therapy and 10.7 ± 11% had to undergo retreatment of some sort. 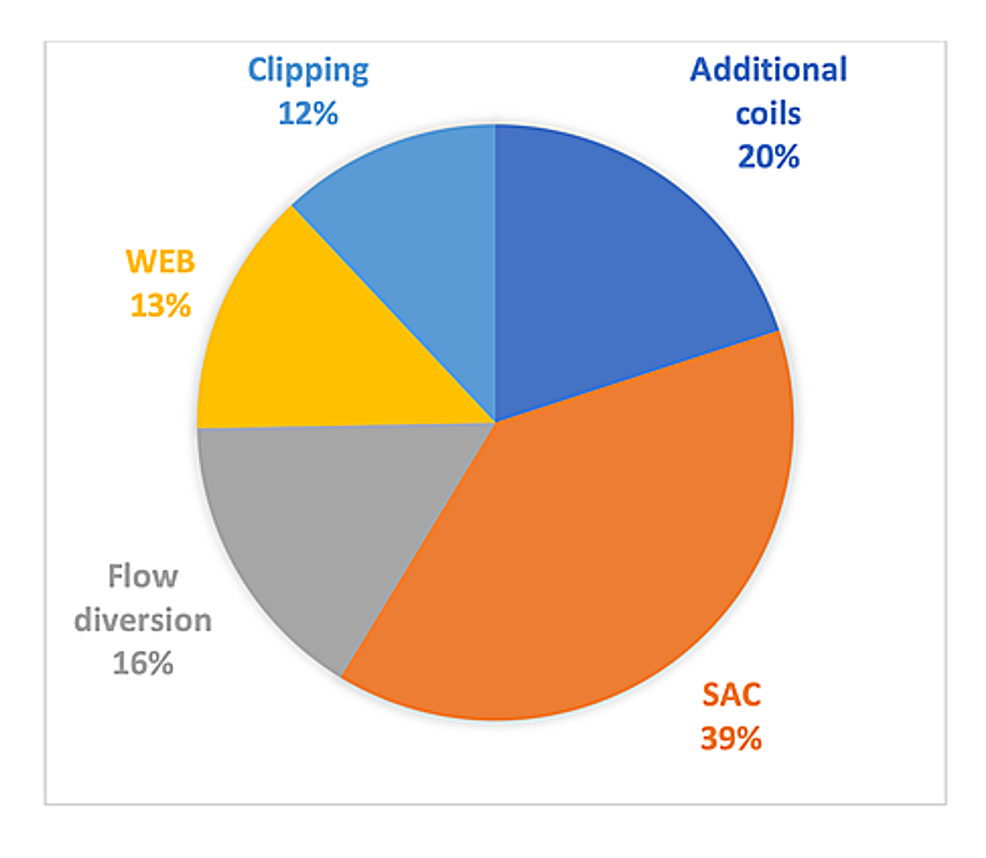 Values are reported as means ± standard deviation unless otherwise specified. A p-value of < 0.05 was considered statistically significant.

This is the first systematic review that focuses mainly on the retreatment of recurrent and residual aneurysms after initial WEB therapy. Our results suggest that a significant proportion of aneurysms following WEB implantation have to be retreated. Retreatment modalities vary, with stent-assisted coiling being the most common retreatment strategy reported in the current literature. Despite this, retreatment of recurrent and residual aneurysms is technically feasible, with an overall good occlusion rate and low complication rate. Furthermore, our data demonstrate that aneurysms requiring retreatment are more likely to be large in size and to have been initially treated with the WEB-DL configuration.

Alternative techniques such as WEB for treating wide neck aneurysms are being used more often. WEB is a nitinol-based electrothermally detachable device that functions as an intra-saccular flow diverter. It is currently approved by the FDA for the treatment of wide neck bifurcation intracranial aneurysms. It works by disrupting the blood flow across the neck of the aneurysm, thus promoting its thrombosis. It does not rely on placement of an intravascular device, eliminating the need for long-term dual antiplatelet therapy. In the early stages, first-generation WEB was a WEB-DL device, which was a dual-layered device with the second nitinol cage placed inside the first nitinol braid. Later, newer generation of WEB devices, such as single-layer configurations (WEB-SL/SLS), replaced the WEB DL. WEB comes in various sizes, but the recommended aneurysm size treatment range is 2-10 millimeters [1].

There is a plethora of evidence in the current literature demonstrating WEB’s effectiveness and safety for the treatment of wide neck bifurcation aneurysms [23-30]. Most recent data demonstrate that the overall rate of adequate aneurysm occlusion at the last follow-up after WEB therapy is approximately 80% [2-3]. Nonetheless, approximately 10% of all aneurysms treated with WEB will recanalize. Zhang et al. found variables such as ruptured status, posterior circulation, and old-generation WEB to be associated with higher recanalization rates [3].

A recent systematic review by van Rooij et al. found only eight studies that reported on retreatment after WEB, with mean retreatment rate of 8.4% following initial WEB implantation; however, that study did not analyze the retreated cohort of aneurysms in detail [2]. Indeed, the results reported in our study reflect a similar rate of retreatment following WEB. Our systematic review focused only on studies that reported retreatment after WEB, and we were able to further analyze the retreated aneurysms. We found that a high percentage of them were initially treated with the first-generation WEB-DL device. As WEB-SL/SLS devices are used more often in the most recent years, and with the newer generations being developed in the near future, we can suspect that the rate of retreatment following initial WEB therapy should decrease. Dome size was another variable we found herein to be associated with aneurysms that required retreatment. We found the mean size of retreated aneurysms to be 11.1 ± 5.5 millimeters, disproportionally larger than what is currently recommended for WEB implantation [1].

In conclusion, this is the first systematic review that focused on recurrent and residual aneurysms that required retreatment following initial WEB implantation. Our results suggest that intracranial wide neck bifurcation aneurysms requiring retreatment are more likely to be large in size and to have been initially treated with the older WEB-DL configuration. Retreatment modalities for such aneurysms greatly vary but carry high technical success rate and low complication rates in the literature. Sufficient knowledge of proper indications for the use of WEB and perhaps the development of newer generations and configurations of the WEB device in the near future may aid in avoiding the need for retreatment.

© Copyright 2021
Peterson et al. This is an open access article distributed under the terms of the Creative Commons Attribution License CC-BY 4.0., which permits unrestricted use, distribution, and reproduction in any medium, provided the original author and source are credited.

Values are reported as means ± standard deviation unless otherwise specified. A p-value of < 0.05 was considered statistically significant.