Extragonadal germ cell tumors (EGCTs) are uncommon, and those involving the prostate are rare. We report on a primary seminoma of the prostate in a 56-year-old male presenting with scrotal pain, urinary frequency and urgency, and erectile dysfunction. Digital rectal examination revealed a hard, markedly enlarged prostate projecting posteriorly into the rectum. All 12 cores from ultrasound-guided prostate biopsy revealed malignant cells that stained positive for OCT4, PLAP, and CD117. Imaging revealed a 10.2 cm x 7.8 cm x 8.4 cm prostate mass with irregular nodular margins extending superiorly to the base of the bladder and posteriorly abutting the anterior rectal wall. There was no evidence of distant metastatic disease on both nuclear medicine and CT scans of the chest, abdomen, and pelvis. An 11 mm right internal iliac lymph node and several tiny sub-centimeter external iliac nodes were noted bilaterally. The patient was treated with radiotherapy to the prostate and pelvic lymph nodes. The pelvic lymph nodes were treated with 20 Gy in eight fractions, followed by a boost to the prostate for a further 20 Gy in eight fractions. There was a significant response during treatment that allowed an adaptive boost for a further 10 Gy in four fractions to bring the total dose to the prostate to 50 Gy in 20 fractions. Treatment was well tolerated. Adjuvant chemotherapy was not recommended. He remains disease-free 24 months post-treatment. This case report indicates that like most seminomas, extragonadal seminomas are exquisitely sensitive to radiotherapy and may be considered for the primary treatment of non-metastatic disease. To our knowledge, this is the first reported case of the sole use of radiotherapy to treat a primary seminoma of the prostate.

Extragonadal germ cell tumors (EGCTs) are uncommon entities that typically originate in the midline of the body, such as the mediastinum, retroperitoneum, pineal gland, and sacrococcygeal areas. EGCTs are divided into seminomatous tumors, consisting only of seminomas, and non-seminomatous tumors, consisting of choriocarcinomas, teratomas, yolk sac carcinomas, and mixed tumors [1]. EGCTs of the prostate are rare, and to date, there are only 10 instances of seminoma of the prostate in the literature [2-11]. In this case report, we present a patient with primary seminoma of the prostate, treated with radiotherapy only. Patient consent was obtained for chart review and case report.

A 56-year-old male presented to his family physician with scrotal pain and erectile dysfunction of three months duration. This was associated with increased urinary frequency and urgency. There was also an associated 20-pound weight loss over that period. Past medical history is remarkable for stage 1 left testicular seminoma treated with a radical inguinal orchiectomy and no adjuvant or neoadjuvant treatment 30 years earlier. Ultrasound of the contralateral right testicle was unremarkable, and urology was consulted.

MRI of the pelvis revealed marked diffuse enlargement of the entire prostate with irregular nodular margins and extraprostatic extension along the left and right lateral pelvic walls with small, soft tissue nodules along the left lateral pelvic wall and possible tiny nodularity on the right lateral pelvic wall. The prostatic mass extended superiorly into the base of the bladder, abutted the anterior rectal wall and levator ani posteriorly and inferiorly, respectively. The prostate measured 10.2 cm x 7.8 cm (axial) and 8.4 cm (cranial-caudal). The seminal vesicles were completely replaced by the prostatic mass. There was an 11 mm enhancing right internal iliac lymph node. Several tiny sub-centimeter bilateral external iliac nodes and a few tiny sub-centimeter perirectal nodes were noted. He was staged as T4 N1 M0 (Stage IVa) according to the AJCC 8th edition for prostate cancer.

The case was reviewed at our regional Genitourinary Tumor Board (multidisciplinary cancer conference) consisting of at least one representative from diagnostic radiology, medical oncology, urology, radiation oncology, and pathology. The consensus was that this was a primary seminoma of the prostate that was limited to the pelvis. While the 1.1 cm right internal iliac lymph node was suspicious for involvement, there was no evidence of para-aortic lymphadenopathy or distant metastasis. His disease was deemed unresectable. Seminomas were noted to be sensitive to both chemotherapy and radiotherapy. In the absence of distant metastasis, primary radiotherapy was recommended.

CT simulation and radiation planning were performed. He was treated with hypofractionated volumetric-modulated arc therapy (VMAT) radiotherapy in three sequential phases. Phase one consisted of radiotherapy to the prostate and pelvic lymph nodes with a dose of 20 Gy in eight daily 2.5 Gy fractions. Phase two consisted of a boost to the prostate with a further dose of 20 Gy in 8 fractions. The gross tumor volume (GTV) was measured at 334 cm3. CT simulation was repeated at the start of the third week of radiotherapy and a significant response was observed. The GTV now measured 138 cm3. He was re-planned and treated with a phase three reduced field size (adaptive) boost for a further 10 Gy in four fractions to the residual prostate mass. The total dose to the prostate was 50 Gy in 20 fractions in over four weeks.

Follow-up MRI four months post-treatment (Figures 1b, d) confirmed a significant decrease of the prostate mass from 10 cm x 7.8 cm x 7.4 cm to 4.9 cm x 3.5 cm x 4 cm. There were no discrete residual masses or enhancing lesions within the prostate, consistent with a complete response. 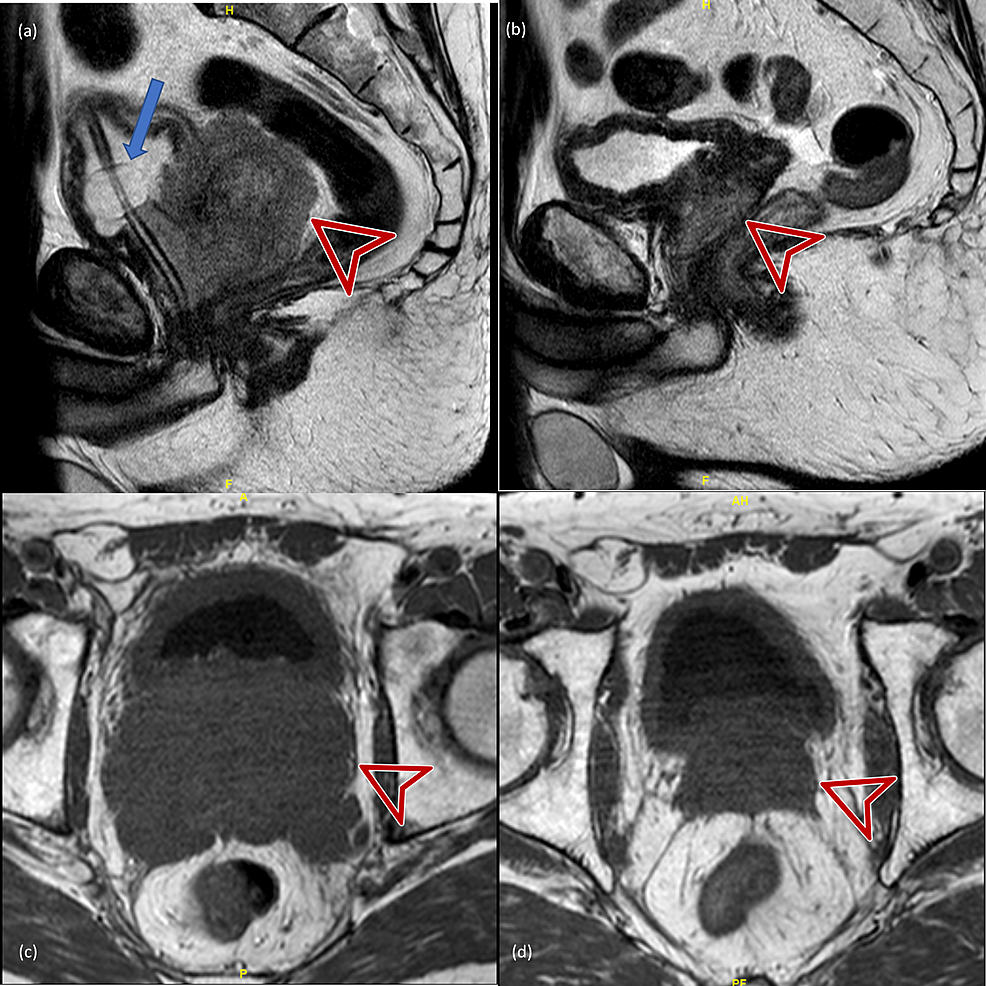 He remains alive and well. There is no late urinary or rectal toxicity, and he is free of recurrent disease on CT and MRI at last follow-up 24 months post-treatment.

The primary seminoma of the prostate is a rare entity. This patient has a history of testicular seminoma with a left orchiectomy thirty years prior. Most recurrences of testicular germ cell tumors occur within two years of treatment. While the longest recurrence for a germ cell tumor is 43 years [12], late recurrences (>2 years post-treatment) are uncommon; the relapse-free rates in 725 patients with stage 1 testicular seminoma managed with surveillance, radiotherapy, 1x carboplatin, 2x carboplatin were 91.8%, 97.6%, 95%, and 98.5%, respectively, after 30-month follow-up. The recurrence pattern for testicular seminomas is predictable as most occur in retroperitoneal sites, followed by the lung and mediastinal sites, then neck and supraclavicular sites [13]. As such, we believe this presentation is a primary prostatic seminoma.

There is a paucity of data to guide the selection of radiotherapy doses for prostate seminoma. Testicular seminomas tend to be radiosensitive and typical non-adjuvant doses are 35-40 Gy [14, 15]. Accelerated hypofractionation with 20 fractions is a standard approach at our center for pelvic malignancies and was thought to be optimal in this setting due to the reduced treatment time and well-established dose-volume toxicity criteria for the adjacent bowel and bladder. We had hoped the reduced treatment time would reduce exposure to the adjacent normal tissue given the anticipated tumor response, as demonstrated on the intra-treatment repeat CT simulation for the adaptive boost.

Due to the rarity of prostatic seminomas, our search strategy involved the selection of PubMed-indexed publications of primary prostatic seminomas, and the exclusion of reports of metastatic disease to the prostate. To our knowledge, there are only ten reported cases of prostate seminoma in the medical literature. Of the ten cases, eight were localized to the pelvis while the others had retroperitoneal involvement [3] or metastatic disease [4]. Six of the eight cases with pelvis-localized disease provided information on treatment and outcome data and these are summarized in Table 2. Of the two case reports without outcome data, one was a vignette on 18-fluoro-2-deoxyglucose positron emission tomography (PET) in a case of prostate seminoma [5], while the other halted treatment after the patient developed a myocardial infarction after two cycles of bleomycin, etoposide, and cisplatin (BEP) chemotherapy [11].

With an average follow-up of 55.4 months (range 5-156 months), there was one reported death [2-4, 6-10]. This patient was diagnosed with a yolk sac tumor with focal seminoma of the prostate and involvement of the bladder neck. He was treated with radical prostatectomy and four cycles of chemotherapy but died of metastatic disease of the yolk sac component to the lungs, liver, and brain eight months later [2].

A complete response was obtained with radiotherapy as a single modality in this patient with a bulky seminoma of the prostate and a suspicious pelvic lymph node. There was no evidence of recurrence at 24 months. To the best of our knowledge, our case report is the first instance of the sole use of radiotherapy for primary prostatic seminoma in the literature, and we present single modality radiotherapy as a consideration for the treatment of localized, non-metastatic disease.

© Copyright 2021
Akingbade et al. This is an open access article distributed under the terms of the Creative Commons Attribution License CC-BY 4.0., which permits unrestricted use, distribution, and reproduction in any medium, provided the original author and source are credited.