Heart failure is a common clinical syndrome caused by a variety of cardiac diseases. We report a rare case of familial transthyretin amyloidosis cardiomyopathy to heighten the awareness of this rare but lethal cause of heart failure, as therapeutic interventions such as liver or heart transplant could be curative in selected patients.

Amyloidosis refers to the extracellular deposition of insoluble fibrils that are composed of low molecular weight subunits of a variety of serum proteins. The three most common types of amyloidosis that can affect the heart are light-chain (AL) amyloidosis, familial or senile transthyretin amyloidosis (ATTR) and secondary (AA) amyloidosis [1]. Transthyretin (TTR) is a tetrameric serum protein that is synthesized primarily by the liver. Accumulation of TTR causes cell toxicity and tissue death. ATTR occurs in two types: non-mutated (senile/wild type) or mutated transthyretin with autosomal dominant inheritance (familial type) [2]. Familial ATTR is caused by any one of more than 100 mutations in the TTR gene, rendering it unstable and resulting in a tendency to misfold and produce amyloid which preferentially infiltrates the myocardium [3]. One of the most common mutations is caused by the Val122Ile mutation, which presents in three to four percent of the African-American and Afro-Caribbean populations. It is associated with a late-onset amyloid cardiomyopathy (CMP) characterized by progressive severe heart failure [4-6]. We report a case of familial ATTR cardiomyopathy to heighten the awareness of this rare but lethal cause of heart failure. Informed consent statement was obtained for this study. 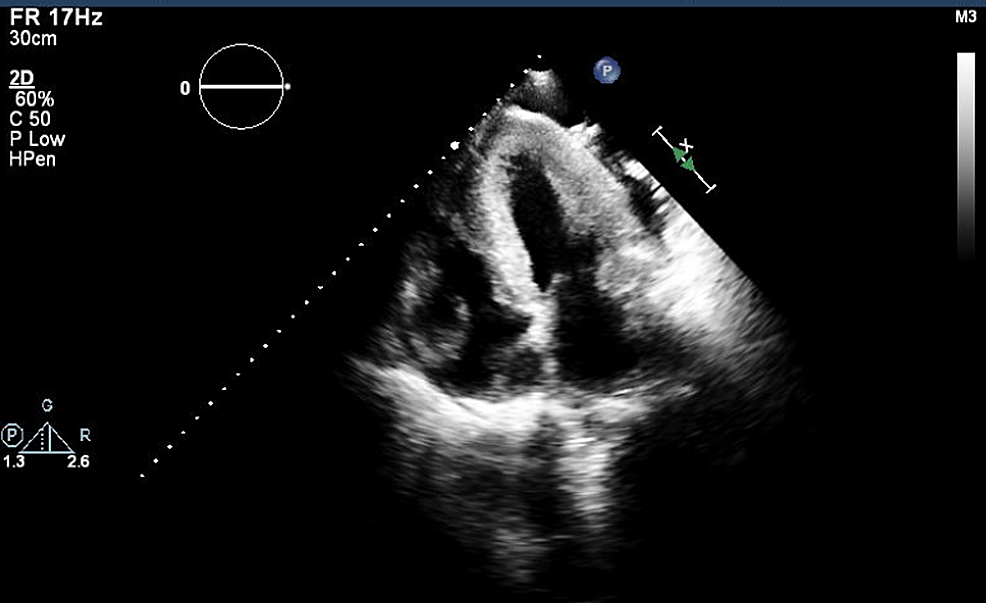 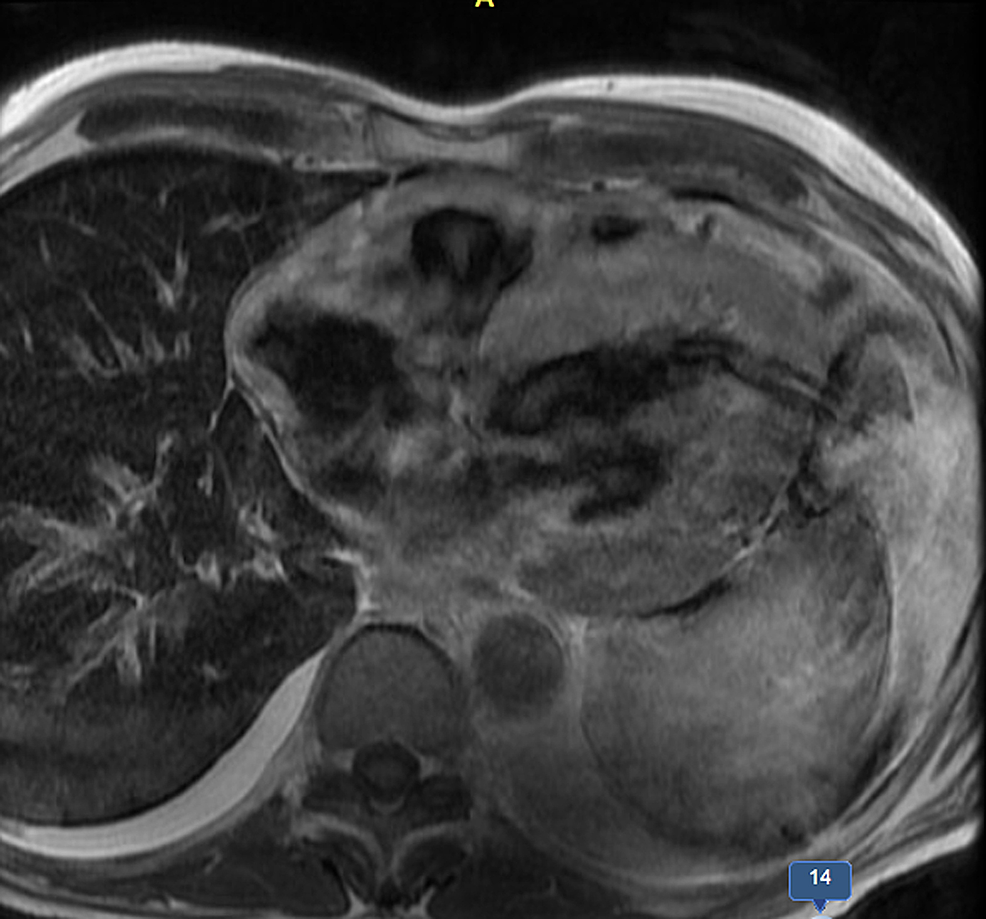 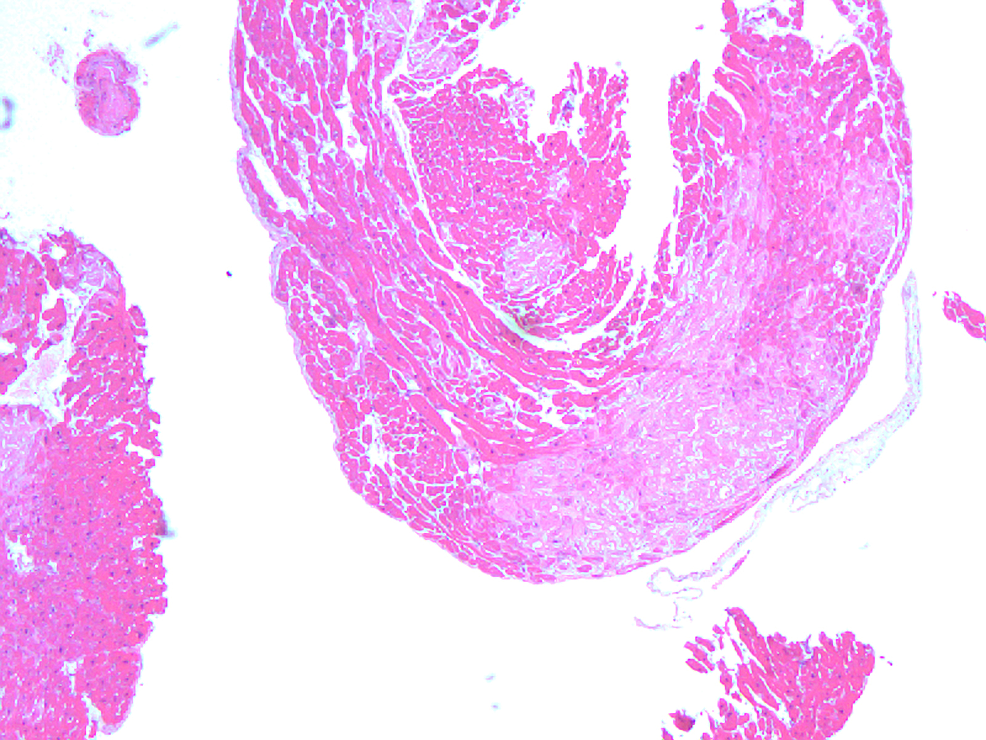 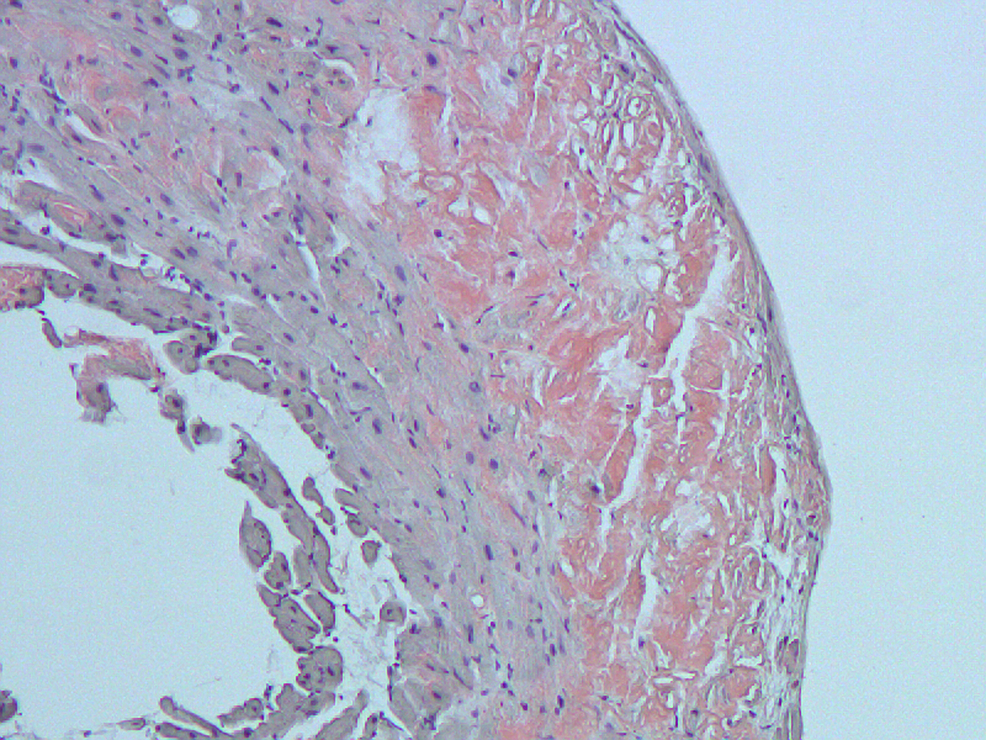 The myocardium contains large patches of hyaline material that stains with Congo red, consistent with amyloid

Further genetic sequencing analysis showed pathogenic Val122Ile mutation and confirmed familial ATTR cardiomyopathy. The patient developed several runs of asymptomatic non-sustained ventricular tachycardia during the hospital stay. Due to high risk for deadly arrhythmias, the patient underwent single-chamber automatic implantable cardioverter-defibrillator (AICD) placement. He was started on warfarin for long-term anticoagulation due to nearly immobile atriums and ventricles. He was evaluated for heart and liver transplants. The liver transplant was postponed due to his heart condition, and ideally, should be pursued after the heart transplant in order to preserve the transplant heart from amyloid deposition. Due to severe hypertrophy with significantly decreased chamber size, left ventricular assisted device was not feasible. Eventually, he was deemed not to be a candidate for the heart transplant due to increased pulmonary vascular resistance. He is currently on palliative care.

In patients without hypertension or valvular disease, biventricular hypertrophy on TTE should raise suspicion for infiltrative cardiomyopathy particularly when associated with low voltage on EKG, as hypertensive left ventricular hypertrophy or hypertrophic cardiomyopathy will usually have high/normal QRS voltage. The cardiac MRI with late gadolinium enhancement is very helpful in supporting the diagnosis of amyloid cardiomyopathy with a sensitivity of 80% and specificity of 94%, positive and negative predictive values of 92% and 85%, respectively [7]. Endomyocardial biopsy is the biopsy of choice for diagnosing ATTR, due to high rates of negative biopsies elsewhere [2]. After histologic confirmation of amyloidosis, if special immunostaining to confirm amyloid subtype is not available, serum and urine immunofixation, immunoglobulin free light chain assay, and bone marrow biopsy are needed to exclude amyloid light-chain (AL) amyloidosis. Further TTR mutation sequencing analysis will differentiate familial from senile type ATTR. In terms of treatment, diuretics use is complicated in ATTR cardiomyopathy as stiff heart is often preload dependent. Beta blockers, angiotensin-converting-enzyme (ACE) inhibitors/ angiotensin receptor blockers (ARBs) should be used with caution because they are often poorly tolerated due to hypotension [2]. Early prophylactic AICD placement is rational, given the high incidence of sudden death from arrhythmia and electrical mechanical dissociation [8-9]. Heart and/or liver transplantation are the most important therapeutic interventions. Liver transplantation can be curative in selective patients as it removes the nidus of mutant TTR and prevents recurrent amyloid deposition. More research is needed to evaluate potential pharmacological agents on stabilizing amyloidosis [2].

We presented a rare case of familial ATTR cardiomyopathy. Unfortunately, by the time of definitive diagnosis, the patient was no longer a candidate for heart or liver transplant, which are potentially curative interventions. Assessment of African American or Afro-Caribbean patients with unexplained heart failure should include a differential diagnosis of transthyretin amyloidosis, as early diagnosis is important to initiate appropriate therapeutic interventions.

© Copyright 2017
Zhou et al. This is an open access article distributed under the terms of the Creative Commons Attribution License CC-BY 3.0., which permits unrestricted use, distribution, and reproduction in any medium, provided the original author and source are credited.

The myocardium contains large patches of hyaline material that stains with Congo red, consistent with amyloid