Background: Although graduated autonomy is an essential component of residency training, we have an incomplete understanding of resident and attending faculty perceptions of autonomy.

Methods: We surveyed senior-level (PGY-2-5) residents and faculty in pediatrics, internal medicine, and combined internal medicine-pediatrics in three large, urban training centers in November 2014. The survey included domain items such as general perceptions of autonomy, case management, rounding structure, and individual resident and faculty factors that may interplay with the granting or receiving of autonomy.

Graduated autonomy is an essential component of residency training across medical specialties [1]. Clinicians and educators are tasked with providing an environment in which patients receive safe, effective, high-quality care, but which also fosters the development and independence of the next generation of physicians.

Graded autonomy interplays in the provision of care and teaching of trainees, as well as educational milestones within the core competencies, construct for both pediatrics and internal medicine (IM) [2,3]. Previous research suggests that a perceived optimal level of autonomy may result in fewer medical errors as well as higher support for patient autonomy [4-6]. In addition, an autonomy-supportive learning environment is more likely to promote self-directed learning and lead to enhanced medical knowledge and skills [7,8]. Mismatches in autonomy perception in the resident-attending dyad may result in dissatisfaction with the learning environment, decreased learning, and increased trainee stress in the clinical environment [4].

We approached institutions with residency training programs in our areas of interest-categorical IM, categorical pediatrics, and combined MP. Program directors for each of the three training programs at University of Pittsburgh Medical Center (UPMC), University of Maryland Medical Center, and ChristianaCare Health System/ Nemours Alfred I. duPont Hospital for Children agreed to participate and to assist with site coordination.

We conducted an online survey modeled after a 2014 study examining residents’ perceptions of autonomy, adapted for use with combined and categorical trainees as well as faculty (Appendix) [11]. Several questions related to residents’ and faculty members’ general perceptions of autonomy on the general inpatient wards. It is possible that faculty afford autonomy with respect to which type of resident they were training (Categorical vs MP). For example, an MP faculty member might have a positive bias towards MP residents and thereby afford them more autonomy than a categorical resident. To control for this, we asked faculty to compare the levels of autonomy they gave to categorical vs. Med-Peds residents. Respondents were asked to rate their perceptions of excessive or inadequate attending oversight. We also asked residents to rate their discomfort with making a decision on their own and faculty to rate their discomfort with a resident making a decision on their own. The survey was pilot tested by faculty and chief residents.

The survey was administered via the online survey system Qualtrics (Provo, UT), and participants received surveys tailored for their specific specialty. Categorical IM and pediatrics residents completed a survey with questions regarding either perception of the inpatient IM or pediatrics ward experiences, respectively. MP residents completed a survey containing identical question blocks for both specialties. The block that a combined-specialty trainee received first was randomized in an attempt to mitigate direct comparisons between the specialties.

All faculty respondents were asked to provide information about the specialty or specialties in which they trained and were practicing. Faculty members then provided a survey appropriate to both their training and current practices. As with the resident survey, if a combined faculty member attended on both specialties, the IM and pediatrics blocks were randomized for which block a respondent received first. Participating programs provided potential respondent e-mail addresses. Individual secure links were created so respondents could only answer the survey one time from that specific link. Residents were deemed eligible to participate if they were postgraduate year 2 (PGY-2) or above in IM, pediatrics, MP, or other combined programs. Faculty was eligible to participate if they attended at least four weeks per year on the generalist inpatient service. One participating site had a policy of not providing e-mail addresses for surveys. For this program, individual use passcodes for eligible respondents were created so respondents could log into the survey system from a forwarded link. The e-mailed links were sent three times at one-week intervals in November 2014. Responses were collected anonymously. No site-specific information was collected. Respondents who completed the survey were offered entry into a raffle for one of several $20 gift cards. 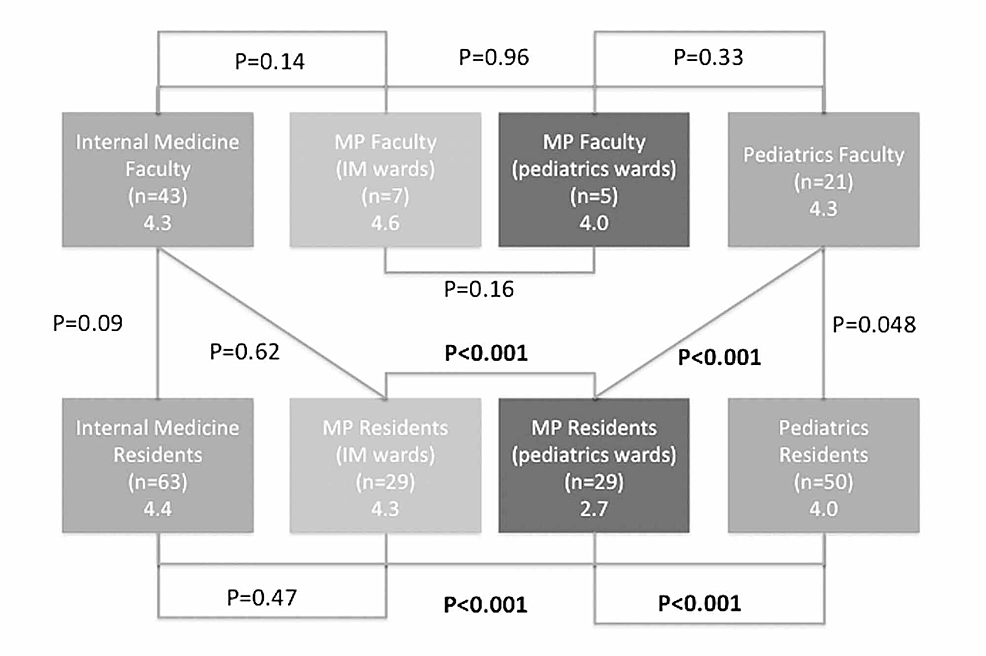 Categorical pediatrics and IM faculty both responded that categorical and MP residents would be given the same level of autonomy. There were few MP faculty attending pediatrics (n = 5), but they were significantly more likely to give MP residents more autonomy (P = .002) than categorical residents.

In order to assess respondents' sense of autonomy on clinical decision-making, we asked residents to report discomfort with making decisions without attending input. On a 6-point Likert scale (1 = Never to 6 = Always), MP residents reported discomfort making decisions without attending input more often while on pediatrics rotations (mean = 3.3) compared to IM (mean = 2.8, P = .01), but they were comparable to both their pediatrics (mean = 3.1) and IM peers (mean = 2.7). MP residents (mean = 3.3) reported more discomfort with making a decision than pediatrics faculty (mean = 2.6) felt in the resident making that decision (P = .006), and a similar relationship was seen between categorical pediatric residents and faculty (P = .006). Categorical residents, faculty, and MP residents on IM rotations had similar comfort levels with a resident making decisions without attending input.

There may be several reasons for the observed differences. First and foremost, MP residents are in the unique situation of being able to compare experiences on two distinct specialties. Literature suggests that there has been an “erosion” of autonomy within the specialty of pediatrics in at least one training program, and, with comparative experience in two specialties, our MP residents’ responses may serve as a bellwether that autonomy may be a concern in other programs as well [12,13]. The differences in perception may stem from pediatrics faculty having less experience with MP residents who only spend half their time with each specialty; however, MP residents may also be less known to IM faculty, and the same differences in perception were not seen.

Despite both being primary care specialties, the culture of care in dealing with disparate patient population ages may vary from pediatrics to IM, in which the expectations for faculty presence and supervision may therefore appropriately differ. However, supervision and autonomy may coexist and have a positive impact on each other since perceptions of increased supervision may actually improve resident reported autonomy [14].

Our study has several strengths. We surveyed MP residents in addition to their categorical counterparts, offering a unique perspective of autonomy and supervision. Given the need to assess more than residents’ perspectives, we also surveyed faculty members who are often the other key player in the autonomy-supervision dyad. Finally, we used a multi-site approach, which broadened the generalizability of our results.

However, there are also limitations. Despite a robust response rate from MP respondents generally, our overall response rate for categorical respondents was relatively low. We attempted to address generalizability by utilizing three separate sites; however, our sites were clustered in the mid-Atlantic region. Finally, our study assessed resident and faculty perceptions of autonomy. Respondents’ perceptions may differ from the supervision relationships viewed through the lens of an impartial observer.

There are significant differences in the perception of autonomy in the two primary care specialties of pediatrics and IM. These seem to be noted most by MP residents who experience the general inpatient wards of both specialties, but also noted in some respects by categorical pediatrics residents. Faculty development programs aimed at teaching and enhancing skill sets specific to autonomy-supportive supervision may be an initial starting point toward an optimal experience for both residents and faculty.

The authors thank Tia Gore for her assistance with manuscript editing and preparation.

© Copyright 2021
Mieczkowski et al. This is an open access article distributed under the terms of the Creative Commons Attribution License CC-BY 4.0., which permits unrestricted use, distribution, and reproduction in any medium, provided the original author and source are credited.