We conducted a retrospective observational study, including a total number of 122 cases of primary GI and pancreatobiliary tract NENs. Slides and blocks of all cases were retrieved from the departmental archives. Immunohistochemical stains including Ki67 were applied to selected tissue blocks of all cases. Tumors were then evaluated for their histological differentiation and tumor grade.

In this study, we found that high-grade (grade 3) WDNETs were more frequent in pancreatobiliary tract than GI tract. Moreover, high-grade WDNETs were associated with a higher mean age than low-grade (grade 1-2) WDNETs. It is extremely important to recognize this subset (high grade) of WDNETs and to distinguish it from PDNECs, as the latter are known to be associated with a worse overall survival. Despite high mitotic rate/proliferative index, high-grade WDNETs are characterized by organoid architecture and monomorphic cell population.

Neuroendocrine neoplasms (NENs) are indolent tumors that can arise in almost all organ systems of the body and encompasses a diverse range of clinical, morphological, and genomic features with varied outcomes. They tend to arise from neuroendocrine cells, i.e., cells having characteristics of both nerve cell (ability to receive signals from the nervous system) and endocrine cells (ability to secrete hormones and peptides) [1]. Histologically, NENs are subclassified into low-proliferating well-differentiated neuroendocrine tumors (WDNETs) and high-proliferating poorly differentiated neuroendocrine carcinomas (PDNECs) [2].

The term well-differentiated, in the context of NENs, denotes the strong resemblance of tumor cells to the non-neoplastic neuroendocrine cells by virtue of their immunoexpression of general neuroendocrine markers (chromogranin A and synaptophysin) and peptide hormone production.

Grade 3 WDNETs are a subset of WDNETs, which are high grade by mitotic rate or proliferative index and exhibit a well-differentiated histology. They have a prognosis that is somewhere between the Grade 2 WDNETs and PDNECs, former being more indolent. In this study, we evaluated the clinicopathological features of primary neuroendocrine tumors of the gastrointestinal (GI)/pancreatobiliary tract with emphasis on high-grade WDNETs, as it is a newly defined entity.

We conducted a retrospective observational study at the Department of Histopathology, Liaquat National Hospital and Medical College, Karachi. A total number of 122 cases of primary GI and pancreatobiliary NENs were retrieved from the departmental archives from January 2011 until July 2020. Cases with prior history to chemoradiation were excluded from the study along with cases of metastatic neuroendocrine tumors. The specimens were received in histology lab. After the gross examination, small biopsies were submitted entirely. Resection specimens were grossed according to standard protocols as per College of American Pathologists (CAP) guidelines. After submission of resection margins, representative sections were submitted from the tumor (one section per centimeter of tumor). Tumors smaller than 2 cm were submitted entirely. Immunohistochemical stains, pan-cytokeratin, synaptophysin, chromogranin A, and Ki67, were applied to selected paraffin-embedded blocks of all cases. Slides of all cases were retrieved and reexamined for tumor grade and differentiated by experienced histopathologists. New sections were performed from tissue blocks where necessary. 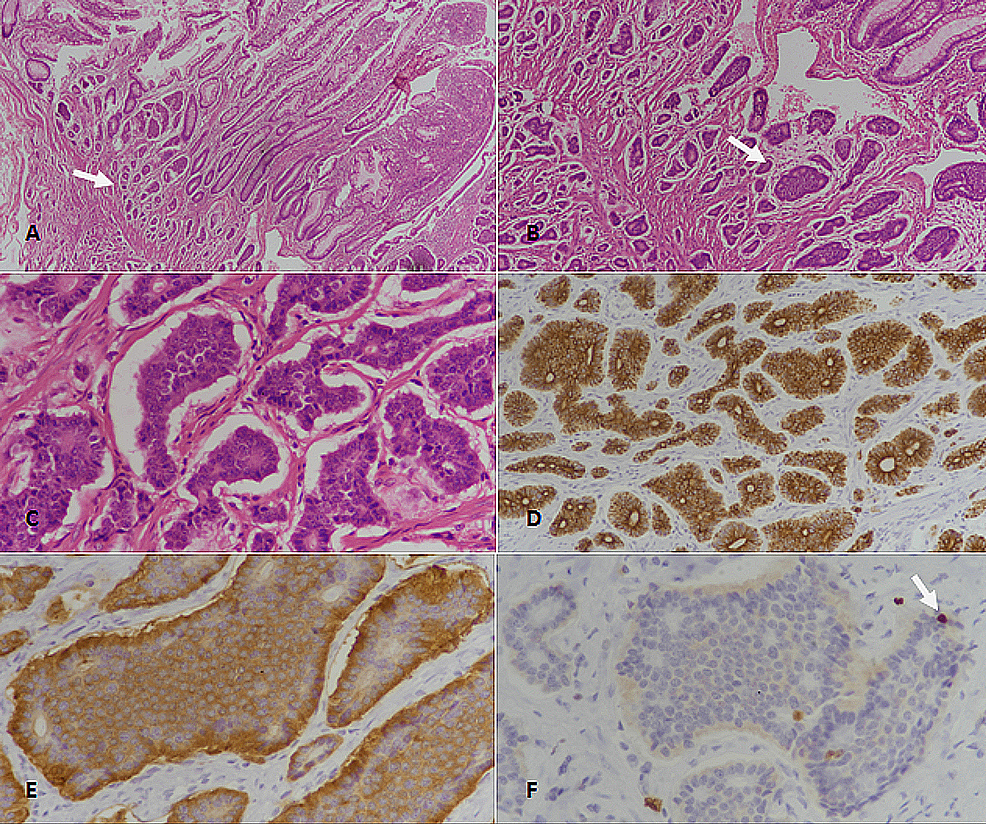 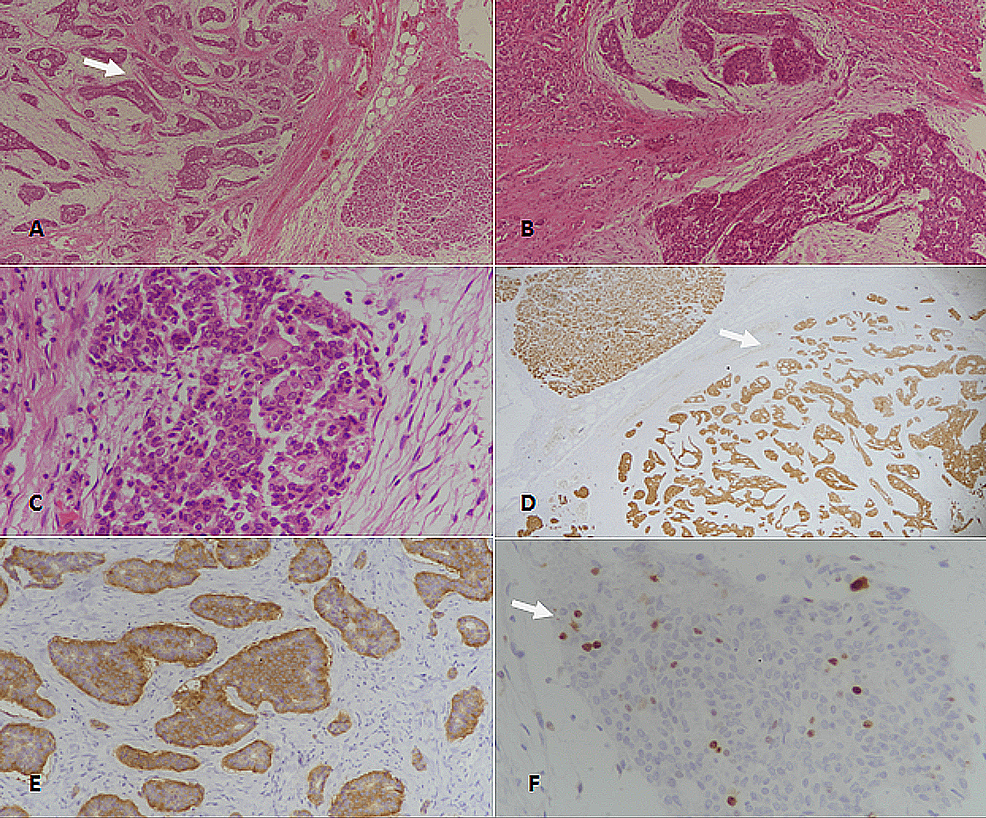 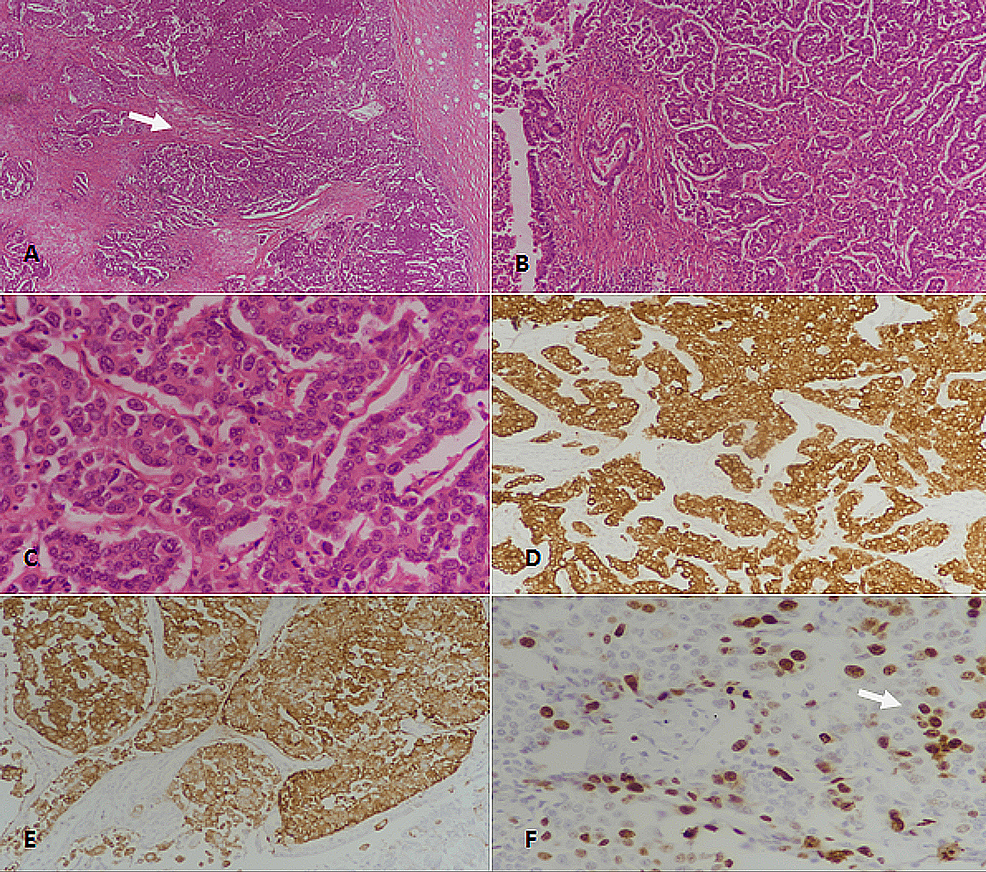 PDNECs were characterized by a sheet-like architecture. Cytologically, the cells are more atypical than WDNETs (Figure 4). 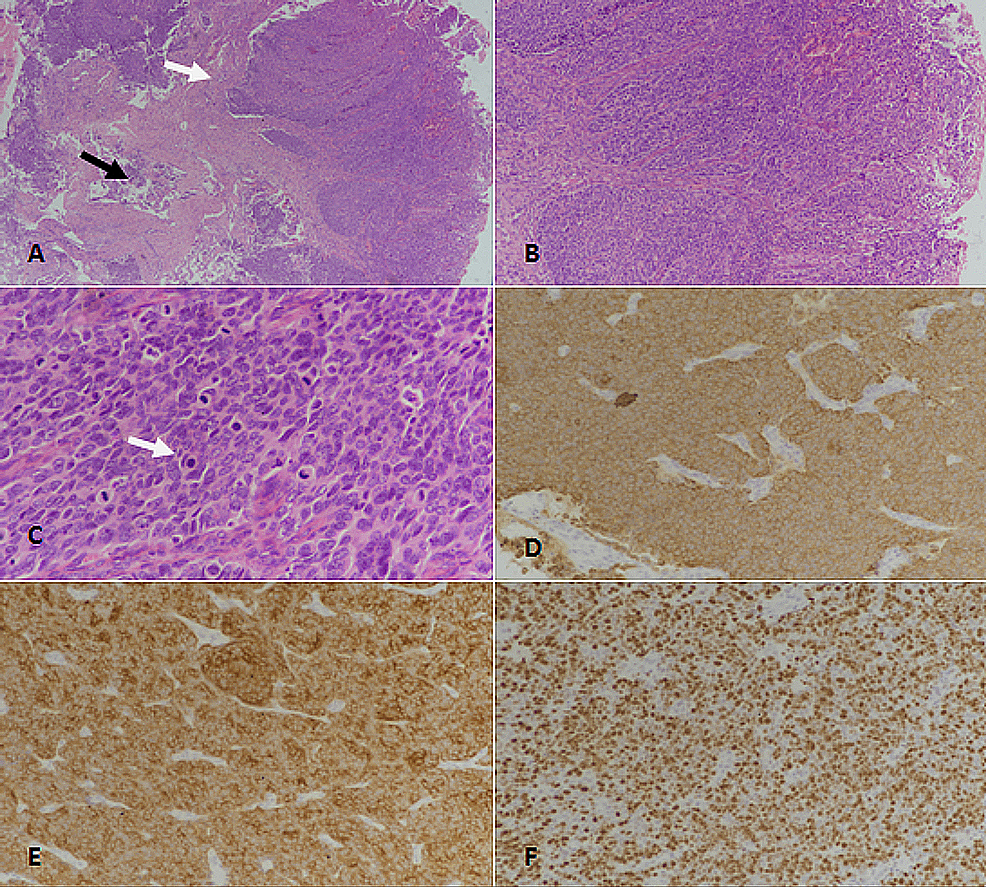 Table 2 compares the features of WDNETs and PDNECs. PDNECs were noted to have a significantly older mean age than WDNETs. No significant difference was noted in terms of the site of origin or gender.

Table 2: Association of clinicopathological characteristics with the type of neuroendocrine neoplasm

Table 3 shows the association of clinicopathological features of WDNETs with tumor grade. There was a significant difference in terms of age. Grade 3 WDNETs were noted to have an older mean age than grades 1 and 2 WDNETs. Ten out of 102 (9.8%) WDNETs of GI tract were grade 3, compared with four out of 14 (28.5%) of pancreatobiliary tract. Grade 2 and 3 WDNETs had a larger tumor size than grade 1 tumors. Grade 3 WDNETs also had a higher tumor (T) stage than grade 1 and 2 tumors; however, the results were not statistically significant.

Table 4: Association of clinicopathological characteristics with the tumor site

Table 5 compares the clinicopathological features of grade 3 WDNETs with PDNECs. Although PDNECs had higher mean age and Ki67 index, the results were not statistically significant.

In our study, we studied the clinicopathological features of primary neuroendocrine tumors of GI/pancreatobiliary tract with emphasis on high-grade WDNETs. WDNETs were far more frequent than PDNECs, especially in GI tract. We found that the small bowel was the most common site for primary WDNETs. We also noted that grade 3 WDNETs were significantly more common in the pancreatobiliary tract than GI tract and were associated with older mean age. We also noted that PDNECs had a higher proliferative index and mean age than grade 3 WDNETs; the finding was not statistically significant owing to the small number of cases in the PDNEC category.

The WDNETs of the digestive tract were previously classified as grade 1 and grade 2 tumors with a criterion of mitoses and Ki67 index being <2 mitoses/2 mm2 and <3% Ki67 index for G1 NETs as well as 2-20 mitoses/2 mm2 and 3%-20% Ki67 index for G2 NETs. Tumors that exceeded the mitotic cutoff of more than 20 mitosis/2 mm2 or Ki67 index of more than 20% were classified as NECs. The recent amendment introduced WDNET grade 3 into the classification. These tumors retain the morphological features of WDNETs, i.e., organoid histological patterns with nests, cords, trabeculae, ribbons, and rosette formation; however, these tumors have more than 20 mitoses/2 mm2 or Ki67 index of more than 20%. The need for this introduction was based on the differences in the pathogenesis of WDNET and PDNEC that impacted the treatment course and clinical outcomes [7]. Moreover, many studies have shown that differentiation status is the most important prognostic factor in determining the clinical course of NENs regardless of their primary site or stage [8,9]. Ishido et al. showed that small bowel tumors that were less than 1 cm had a risk of muscularis propria and lymphovascular invasion along with lymph node metastasis [10].

Grade 3 WDNETs are considered prognostically worse than PDNECs. A study revealed that high-grade component was noted in 48% of WDNETs of GI/pancreatobiliary tract with a median disease-free survival (DFS) of 55 months that was significantly better than PDNECs (median DFS = 11 months) [7]. Similarly, another study revealed 12.9 months overall survival for GI/pancreatobiliary tract PDNECs [11]. Therefore, it is essential to distinguish grade 3 WDNETs from PDNECs.

Immunohistochemical studies are useful in determining the site of origin of NENs. While CK7 and CK20 stains are of limited use in this context, TTF1 and CDX2 are helpful in differentiating lung-origin NENs from GI-origin NENs.

To date, few studies have compared the clinicopathological features of high-grade (grade 3) WDNETs from low-grade (1-2) NETs. While the sample size of our study was small and we compared the results retrospectively, we found significant associations of grade 3 WDNETs in terms of age and location. However, follow-up data were not available; therefore, we could not compare the survival or disease recurrence between different grades of WDNETs. Therefore, based on our results, large-scale prospective trials are warranted to validate our findings and to further reveal the differences between these tumors in terms of recurrence and survival.

NENs are heterogeneous in terms of disease origin and pathogenesis. Grade 3 WDNETs are recently described. In our study, we noted that grade 3 WDNETs were more common in the pancreatobiliary tract than GI tract. Moreover, grade 3 WDNETs were associated with older mean age than low-grade WDNETs. Further studies are needed to explore more differences between WDNETs of different grades in terms of survival and disease recurrences in our population. In addition, biological differences between WDNETs of different grades should be explored for better patient management. For a pathological perspective, it is extremely important to understand the morphological differences between high-grade WDNETs and PDNECs, as some recent studies have shown a significant difference in the survival between these two groups of NENs, despite comparable proliferative index.

© Copyright 2021
Hashmi et al. This is an open access article distributed under the terms of the Creative Commons Attribution License CC-BY 4.0., which permits unrestricted use, distribution, and reproduction in any medium, provided the original author and source are credited.

Table 2: Association of clinicopathological characteristics with the type of neuroendocrine neoplasm

Table 4: Association of clinicopathological characteristics with the tumor site