Hashimoto's encephalopathy (HE), also known as steroid-responsive encephalopathy, is associated with autoimmune-mediated thyroiditis. Onset is typically gradual often with evolution over the course of months. Characteristic symptoms include impaired concentration and memory, delusions, hallucinations, personality changes, incoordination, tremor, hemiparesis, seizures, and speech difficulties. Diagnosis is predicated upon discovery of elevated anti-thyroid antibodies, specifically anti-thyroid peroxidase (TPO) or anti-M antibodies. Some patients may also present with subclinical hypothyroidism but many are euthyroid. Of note, neither thyroid function tests or antibody titers correlate with disease severity. Other common laboratory findings include elevations in sedimentation rate, liver enzymes, and cerebrospinal fluid (CSF) protein. Radiological work-up, including cerebral angiography, is often normal. Successful treatment includes administration of steroids and/or intravenous immunoglobulin (IVIg) or plasmapheresis. We describe a case of a 74-year-old male who presented for evaluation of abrupt onset confusion ultimately determined to be a consequence of autoimmune-mediated thyroiditis.

Hashimoto's encephalopathy (HE), or steroid-responsive encephalopathy, is a disorder associated with autoimmune-mediated thyroiditis. It affects both the nervous and endocrine systems [1]. It is characterized by myoclonus, seizures, and confusion with often fluctuating levels of consciousness. The condition may also be associated with paranoid delusions and hallucinations. Unfortunately, the cause remains unknown [2]. Available literature suggests a pathological inflammatory response as a central feature in the evolution of the disease. Still, a clear association between encephalopathy and Hashimoto's thyroiditis (HT) has yet to be established. It is well established that corticosteroid or other immunosuppressive therapies (e.g. IVIg, plasmapheresis) afford significant improvement, or complete resolution, of symptoms. Its course is variable and may be self-limited without treatment, progressive without treatment, resolve with treatment, or follow a relapsing-remitting course in spite of treatment.

A 74-year-old male with remote history of left frontal lobe stroke, uncontrolled insulin-dependent diabetes mellitus, coronary artery disease, atrial fibrillation, congestive heart failure, and pseudogout presented for evaluation of waxing and waning confusion that began 24 hours prior to arrival. Prior to evaluation by our Neurology service, he was found to have a urinary tract infection (UTI) and started on Levaquin. A non-contrast computed tomography (NCCT) scan of the head revealed chronic left frontal encephalomalacia (Figure 1). 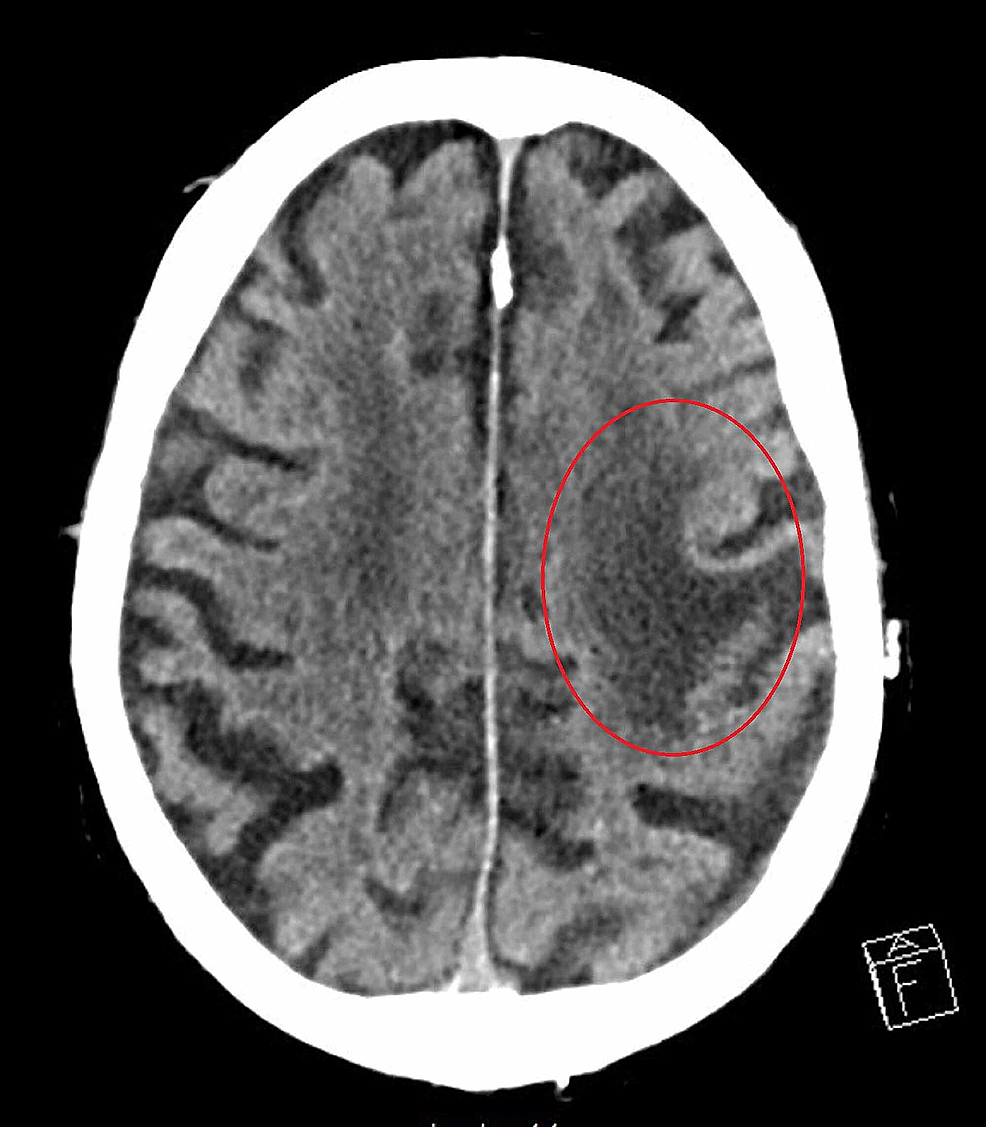 Subsequent MRI brain showed an acute infarct in the right splenial region of the corpus callosum on diffusion-weighted imaging (Figure 2).

This infarct was new when compared to an MRI brain that was performed outpatient one week prior to presentation to our emergency department (image unavailable). He had reportedly experienced progressive cognitive decline over the six months preceding presentation. 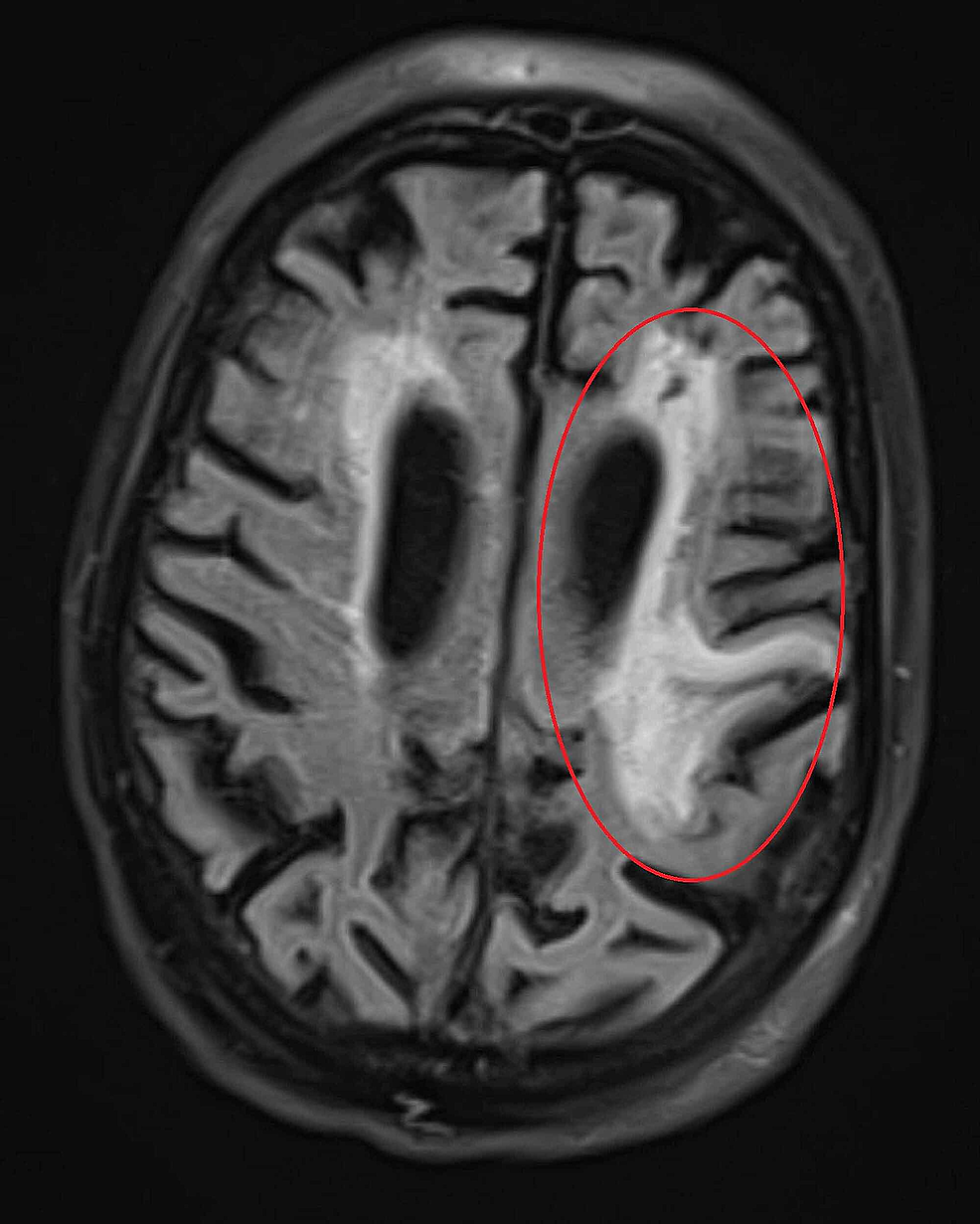 Additional tests were performed to further characterize his persistent stupor. Conventional angiogram was without evidence of vasculitis. Contrast-enhanced CT of the chest showed asymmetric enlargement of the thyroid with leftward sub-sternal extension; there was no sign of malignancy. Contrast-enhanced CT of the abdomen and pelvis was also negative for malignancy. Electroencephalogram was without evidence of epileptiform discharge or seizure activity. A lumbar puncture showed no evidence of pleocytosis but did reveal elevated protein (63mg/dL; normal range 15-45) and IgG index (6.4mg/dL; normal 0.0-6.0). Due to findings on CT chest, NCCT of the soft tissues of the neck was performed which revealed enlarged left thyroid lobe (Figure 4). 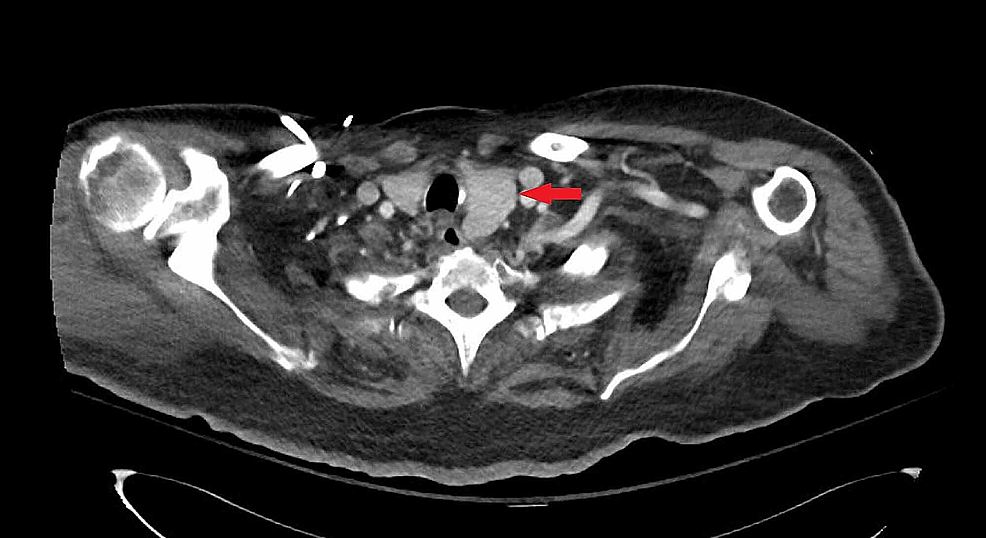 The elevated thyroid peroxidase antibody titer with concomitant elevation of inflammatory markers suggested a probable diagnosis of HE.

A detailed understanding of the immunopathology underlying HE is paramount in reliable diagnosis. Presently, the mechanism that promotes formation of anti-thyroid antibodies is unknown. Regardless, these antibodies are considered pathologic and may develop as a consequence of cross targeting of foreign antigens invading the body. Still, there is no general consensus in current medical literature [3]. The link between encephalopathy and HT is not yet known since there is no evidence that anti-thyroid antibodies are harmful to neurons [4]. Further, a significant number of encephalopathic patients with antithyroid antibodies are euthyroid. Hence, a more accurate name for this condition has been coined: steroid-responsive encephalopathy associated with autoimmune thyroiditis (SREAT). The type and severity of symptoms vary in those affected by this disease [5]. The common feature in diagnosis of patients with SREAT is the presence of anti-thyroid antibodies, specifically anti-TPO or anti-M antibodies. However, these antibodies have been noted to be highly prevalent in normal subjects. In one study, the prevalence of high anti-TPO antibody concentrations was 11% in euthyroid young adults, 23% in euthyroid women >60 years, and 67% in older women with hypothyroidism [4].

The most common presenting symptom is abrupt confusion with altered level of consciousness but it may be insidious. Some experience lethargy, visual hallucinations, and fluctuating confusion that may eventually lead to dementia [6]. In extreme cases, lethargy can progress to coma [7]. Non-cognitive symptoms of tremor, myoclonus, and seizures may also occur. Still, encephalopathy is the most common symptom. The classic clinical picture is characterized by a decline in cognitive ability with impairment in orientation, level of consciousness, and attention. Associated symptoms include poor appetite, hyperreflexia, seizures, dysarthria, and ataxia. Other attributable, or pathognomonic, symptoms are difficult to identify due to the rare nature of the disorder. Prognostication is difficult owing to the fact that a subset of patients will experience a relapsing-remitting course in spite of treatment [8]. Anxiety, depression, hypersomnia, or difficulty initiating sleep can be the initial presenting symptom [9]. Depression, anxiety, social withdrawal, and emotional lability as sole symptoms have also been reported [10].

The diagnosis of this disorder is based on specialized clinical tests, history, and identification of characteristic clinical signs and symptoms. Variable presentations make an already difficult diagnosis even more difficult. A detectable level of anti-thyroid antibodies must be present for diagnosis [10]. If high serum levels of these antibodies are found, cerebrospinal fluid should also be evaluated for elevated protein (a nonspecific marker of inflammation that can be observed in patients with underlying endocrine abnormalities). Electroencephalography may detect the presence of subclinical seizure activity or generalized slowing related to encephalopathy. MRI brain is useful to eliminate the possibility of other structural causes of encephalopathy [9].

Corticosteroid administration is crucial to establish steroid responsiveness by nonspecifically targeting inflammation including that originating within the central nervous system. An optimal dose of steroids has yet to be established but it is presumed to vary with the severity of the condition. Initially, the general consensus is that high doses of corticosteroids should be used with subsequent taper after the desired result is achieved. High corticosteroid doses over a prolonged period have considerable side effects. Intravenous immune globulin or plasmapheresis may also be used to neutralize circulating autoantibodies [11]. Typically, symptoms are either significantly improved or resolve within a few months of treatment [11].

A high index of suspicion is necessary for reliable identification and diagnosis of this rare and disabling, but treatable, condition. Routine ordering of anti-thyroid antibodies (i.e. anti-TPO and anti-M) may not be cost effective in the workup of the frequently encountered encephalopathic patient, especially in cases where thyroid function is found to be normal. However, if a patient does not return to baseline in a timely fashion after all potential precipitating factors have been addressed, HE (or SREAT) should be considered.

We would like to thank Dr. Spencer Bachow and express our heartfelt appreciation for his significant contribution to this paper.

© Copyright 2021
Kondramashin et al. This is an open access article distributed under the terms of the Creative Commons Attribution License CC-BY 4.0., which permits unrestricted use, distribution, and reproduction in any medium, provided the original author and source are credited.