Myxomas are rare, benign tumors of uncertain etiology. Based on the published data, there have been few reported cases of eyelid nerve sheath myxomas and two cases of orbital myxomas. Eyelid nerve sheath myxomas have a similar presentation to neurothekeoma of the myxoid variety, and historically these two diagnoses have been considered interchangeable. At present, the proper diagnosis can be found through protein immunoreactivity with histological staining. Currently in published literature, there has not been documentation of a family history with eyelid growth in patients diagnosed with nerve sheath myxomas. In this case report, we present a 19-year-old male with a potential third recurrence of nerve sheath myxoma who reports a family history of similar eyelid lesions.

A 19-year-old otherwise healthy male presented with a recurrent left lower eyelid lesion status post multiple excisions. He reported a recurrent growth on the left lower eyelid over the past few months. Of note, the patient also reported that both his mother, aunt, and cousin had similar lesions on their eyelids. The patient denied any history of tobacco or illicit drug use. He complained of blurry vision in the left eye with aesthetic concerns, however, he denied any other ocular complaints. Examination was significant for a left lower lid cystic lesion approximately 5 mm in diameter and decreased tear break up time of the left eye. The rest of his ocular examination was unremarkable.

An excisional biopsy was performed in the clinic without any complications and the tissue was sent for histopathological evaluation. Grossly, the tissue sample consisted of two irregularly shaped, yellow/gray/white masses measuring 0.3 x 0.3 x 0.1 cm in aggregate. Routine hematoxylin and eosin stain was performed which revealed benign spindled-stellate and epithelioid cells embedded in a myxoid stroma (Figure 1A). Based on that information, the differential diagnosis included nerve sheath myxoma, neurothekeoma, and myxoid neurofibroma. Cells were positive for glial fibrillary acidic protein (GFAP) (Figure 1B), vimentin (Figure 1C), CD34 (Figure 1D), Alcian blue (Figure 1E), and S-100 (Figure 1F) but not epithelial membrane antigen (EMA) immunostain. Microphthalmia transcription factor (MiTF) staining was non-contributory because of insufficient tissue sample. The strong expression of GFAP in addition to the positive S-100 stain favored a diagnosis of nerve sheath myxoma. GFAP and S-100 immunostains are usually negative in neurothekeoma. The prominent myxoid change may mimic a cystic lesion which was initially suspected. 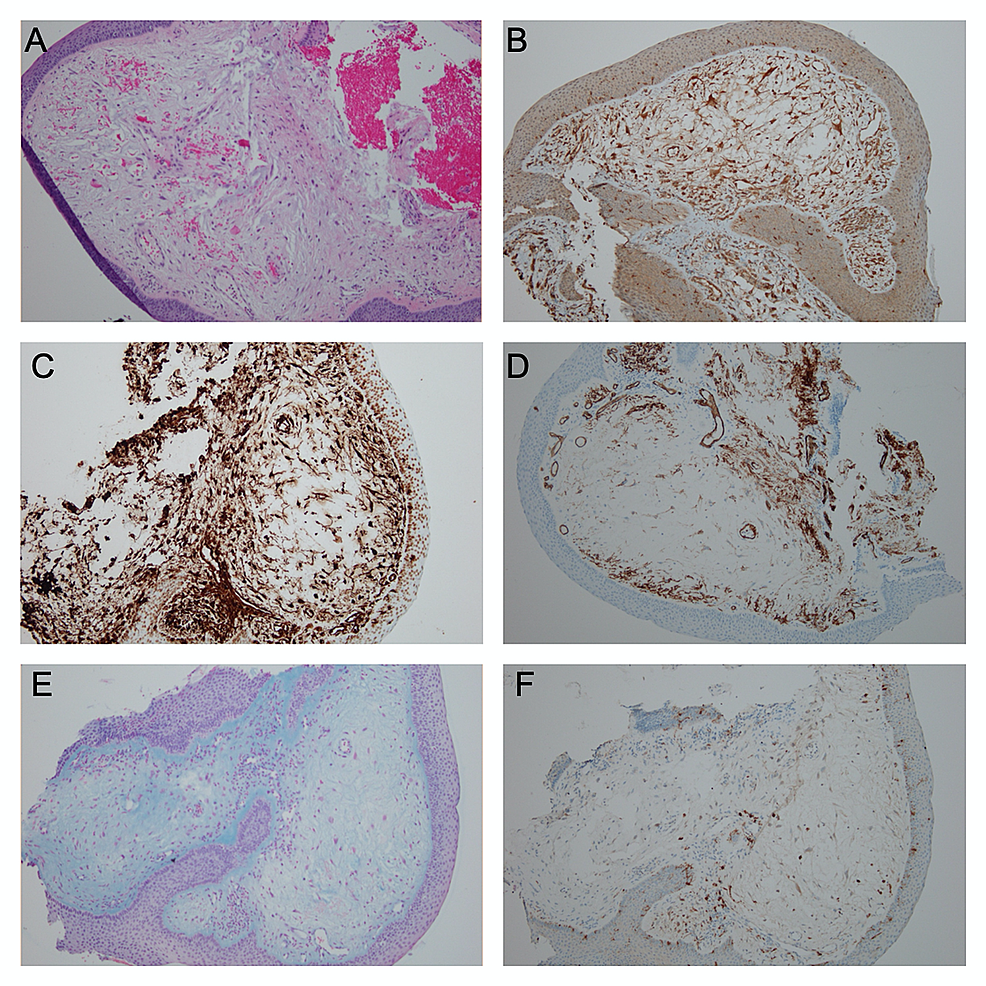 His past medical history was significant for left lower lid growth two years prior to this encounter, which was removed. Interestingly, the histopathology report at that time was significant for a gray mass which measured 0.4 x 0.2 x 0.2 cm. Pathology results showed tissue consistent with irritated fibroepithelial polyp of the skin. Periodic acid-Schiff (PAS) stain for fungal microorganisms was negative. Ki-67 did not show an increase in proliferative activity. Further testing may have shown that the lesion may be similar to the one found in this case. We do not have the histopathology report of the previous excisional biopsies that were done.

Other important differential diagnoses of nerve sheath myxoma include superficial angiomyxoma (cutaneous myxoma) and schwannomas. Cutaneous myxomas are also multilobulated but are usually negative or weakly S-100 positive with positive CD34 and positive actin staining [2, 6]. Schwannomas show low levels of CD34 - positive fibroblasts and EMA - positive perineural cells and may be closely related to nerve sheath myxomas, however further studies are needed to establish this relationship [6]. Given the possibility the patient's family members may have similar lesions, it is important to consider carney complex as a part of our differential diagnoses [7]. Unfortunately, our patient was lost to follow up and the indicated workup for possible carney complex was not done.

In conclusion, nerve sheath myxomas are rare tumors which occur even less frequently on the eyelids. Both nerve sheath myxomas and neurothekeomas could be differentiated using the proper immunohistochemical stains. Other important differential diagnoses of nerve sheath myxoma include superficial angiomyxoma (cutaneous myxoma) and schwannomas. This case highlights the importance of obtaining immunohistochemical stains for differentiating nerve sheath myxomas from neurothekeomas. Given the paucity of cases in the literature, more case reports may provide a stronger genetic predisposition, considering that our patient reported a history of multiple close family members with similar eyelid lesions. Because of the high likelihood of recurrence, total excision with clear margins and close follow up is the best treatment for patients.

The authors would like to thank Dr. Tammey Naab, M.D. and Dr. Earl Kidwell, M.D. for their contribution to this case report.

© Copyright 2020
Guiseppi et al. This is an open access article distributed under the terms of the Creative Commons Attribution License CC-BY 4.0., which permits unrestricted use, distribution, and reproduction in any medium, provided the original author and source are credited.