Findings from this study corroborate differences by age, race, and sex discussed in the literature. Differences in survival rates by race depart from some findings in literature documenting no significant differences in treatment outcome by race. Controlling for age in a future study in both race and sex survival probability analyses may be helpful. Further, stratifying by sex in survival probability analysis by race would be illuminating. In addition to survival analysis, regression modeling would be a useful next step.

The United States cancer data is available from the National Cancer Institute's Surveillance, Epidemiology, and End Results (SEER) Program. Depending on the databases selected for analysis, SEER data includes up to 11,135,914 total malignant and in situ cases [1]. This data has been used to study cancer trends and survival in numerous published studies [1,3,6]. SEER database can be used to analyze pancreatic cancer cases based on demographic data or to export relevant variables for analysis with an external tool. Using SEER data [1], this study evaluated the association between 5+ year survival of pancreatic cancer and the demographic factors of age, race, and sex.

SEER*Stat [1] was used to retrieve cancer incidence data (SEER 18: 2000-2017) from the National Cancer Institute. Only cases with pancreatic carcinoma [7] were included with the relevant demographic variables age, race, and sex. SEER grouped patient ages into fourteen brackets of five years each for ages 15 years through 84 years and one category for 85+ years. Races assigned to patients in the SEER dataset included American Indian / Alaskan Native, Asian / Pacific Islander, Black, White, and "unknown" [1].

IBM SPSS [8] was used to generate descriptive statistics for age, race, and sex from case data. SPSS [8] crosstabs were also used to generate 2x2 table data for race and sex. This information was used to conduct odds ratio analysis using Epi Info [9]. Odds ratios (OR) were calculated with confidence intervals, to evaluate odds of death before reaching 5+ year survival of pancreatic carcinoma. Cases with "unknown" race (n = 321) were excluded for analyses by race. OR calculations were completed for each individual race as compared with "all" other races in the dataset. Additional analyses were completed to compare the Asian and Pacific Islander group, which was the group with the highest odds of reaching 5+ year survival, and other race groups. OR values were calculated to compare survival odds for this group with American Indian / Alaskan Native, White, and Black groups.

Survival analysis was conducted using OriginPro [10]. Survival distributions based on age, race, and sex were calculated using the Kaplan-Meier (product-limit) survival analysis method with months of survival as the time variable, vital status as the censor variable, and a demographic factor (i.e., age, race, or sex) as the grouping variable.

Survival analysis based on sex suggested that females had measurably increased odds of survival earlier in disease progression. That is, overall females were more likely to survive in the initial months following diagnosis during at least the first 10 months. Beyond the first 10-month survival rates were nearly indistinguishable between men and women (Figure 1). 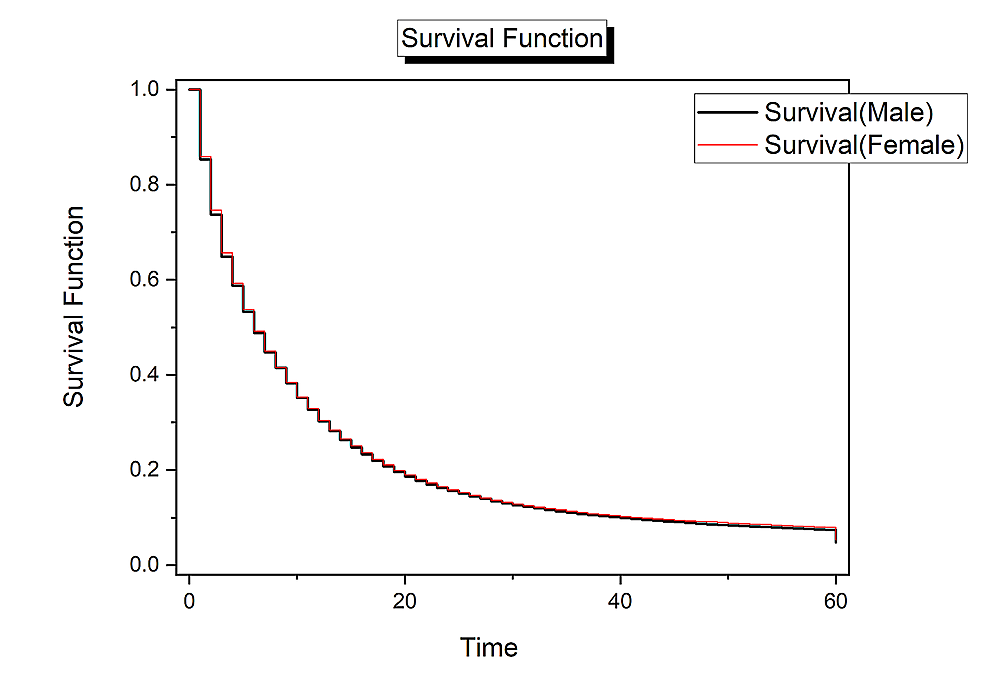 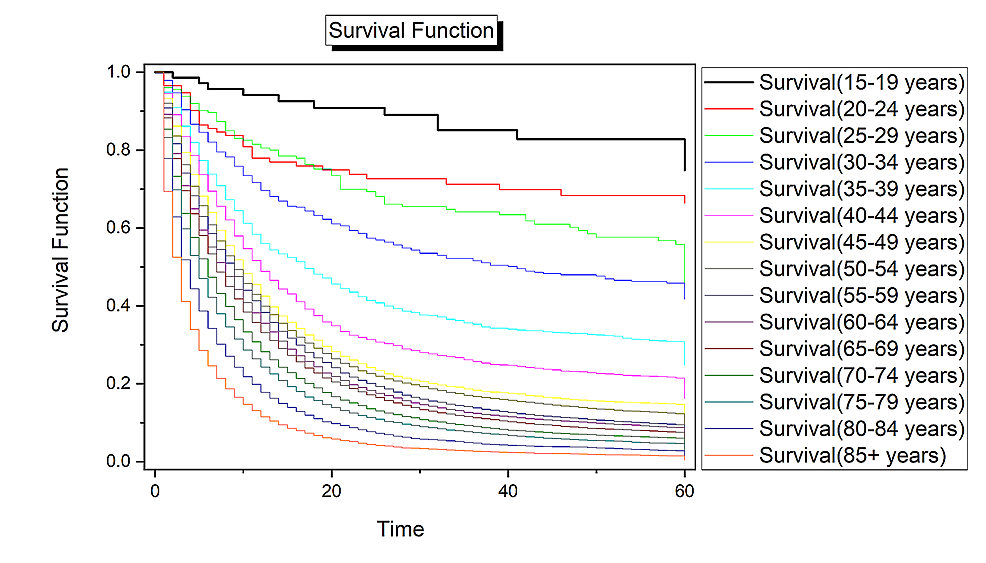 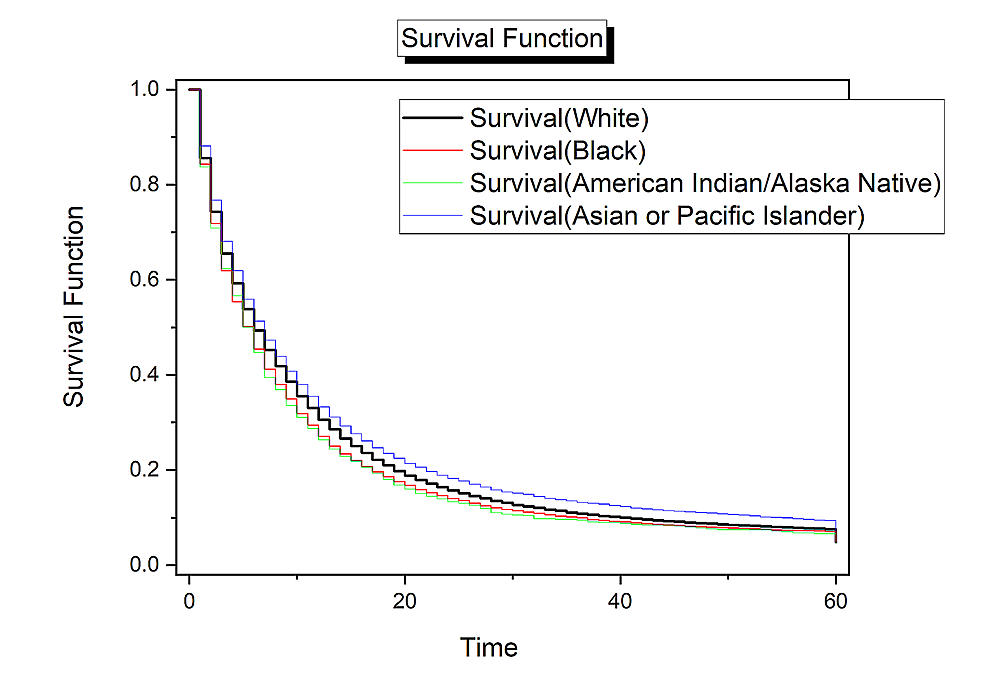 Time (x-axis) is given months.

Analysis based on sex suggested that the risk of death before reaching 5+ year survival of pancreatic cancer was slightly higher for men (OR = 1.03, 95% CI: 1.00 - 1.07). While this small difference was significant, the risk difference is not large enough to suggest that major differences in risk are present based on sex.

Results of five-year age-standardized survival by race are consistent with reported incidence rates [1] but contrast with some findings in the literature. A 2013 study found no significant difference in survival rates by race in patients in the study population [11]. However, this study may not be comparable with the broader experience of pancreatic cancer patients in the United States because it was conducted with a population traced in the US Department of Defense facilities [11]. Findings from other studies highlight differences in treatment outcomes based on race for pancreatic cancer cases and for patients with cancer in other sites [2,4-6].

The SEER databases do not cover the entire United States population. As such, SEER studies sometimes make the assumption that the dataset is representative of the nation's cancer outcomes [12]. However, with coverage of 35% of the U.S. population [1], it is important to interpret the data from this and other SEER studies in context [1,12].

Differences in survival probabilities by age in this study met the expected trend of declining probability of survival as age increases. In the study dataset, this trend emerged beginning in the age group 25-29 and strengthened as age increased. More research is necessary to better understand the role of age in pancreatic cancer survival beyond 5 years. Relating age with biological factors and behavioral risk factors could improve our ability to predict pancreatic cancer risk and likelihood of 5+ year survival for those diagnosed with pancreatic cancer.

Health Science and Education, University of the People, Pasadena, USA

Human subjects: Consent was obtained by all participants in this study. East Tennessee State University IRB issued approval N/A. The ETSU IRB provided the following decision in a letter dated October 14, 2020: "The determination is that this proposed activity as described meets neither the FDA nor the DHHS definition of research involving human subjects. Therefore, it does not fall under the purview of the ETSU IRB. East Tennessee State University IRB review and approval is not required.". Animal subjects: All authors have confirmed that this study did not involve animal subjects or tissue. Conflicts of interest: In compliance with the ICMJE uniform disclosure form, all authors declare the following: Payment/services info: All authors have declared that no financial support was received from any organization for the submitted work. Financial relationships: All authors have declared that they have no financial relationships at present or within the previous three years with any organizations that might have an interest in the submitted work. Other relationships: All authors have declared that there are no other relationships or activities that could appear to have influenced the submitted work.

© Copyright 2021
Anama-Green et al. This is an open access article distributed under the terms of the Creative Commons Attribution License CC-BY 4.0., which permits unrestricted use, distribution, and reproduction in any medium, provided the original author and source are credited.

Time (x-axis) is given months.