This study aimed to estimate and investigate the prevalence and the risk factors implicated in contact dermatitis among healthcare workers in the Al'Qassim region, Saudi Arabia, during the COVID-19 pandemic.

We conducted a cross-sectional survey among healthcare workers at hospitals in the Al'Qassim region. Data was collected using a standardized and validated Nordic Occupational Skin Questionnaire version 2002. We included 408 participants in the analysis.

Coronavirus disease 2019 ( COVID-19) was detected in December 2019 in Wuhan, China. It is described as pneumonia of unknown cause that spreads from person to person [1]. The highly-Infectious virus spreads mainly by coughing or sneezing through droplets from the infected person, community transmission, and direct contact with contaminated objects. Appropriate use of personal protective equipment (PPE), personal hygiene, and social distancing reduce transmission rate [2]. World Health Organization (WHO) labeled COVID-19 as a global pandemic in March 2020, and all countries around the world were advised to take preventive measures to reduce the transmission of the virus [3]. In Saudi Arabia, the first case of COVID-19 was detected in a traveler on March 2nd, 2020 [4].

Frequent handwashing and prolonged use of PPE were observed among the healthcare workers ever since this pandemic started. Consequently, many skin diseases have emerged, such as contact dermatitis, pressure urticaria, and pressure injury. Many patients have complained about the worsening of their pre-existing skin conditions, including acne and seborrheic dermatitis [1]. Being a healthcare worker poses a high risk of developing occupational-related skin diseases [5]. Studies have shown that prolonged wearing of face mask can cause contact dermatitis, pressure urticaria, itching, acneiform eruption, and indentation. Protective caps cause scalp occlusion, which may exacerbate seborrheic dermatitis, folliculitis, and itching. According to reports, the nasal bridge is the most affected site due to the continuous, prolonged use of protective goggles. Healthcare workers frequently use latex gloves; their use contributes to blister formation, occlusion, and maceration, which may lead to contact dermatitis in certain cases. Also, excessive handwashing by detergents and disinfectants disrupts the hydrolipid barrier, which causes skin dryness and irritation. Scientists have attributed most of the skin manifestations in healthcare workers to hyperhydration, skin irritation, epidermal barrier disruption, and contact reactions that may result from prolonged use of personal protective equipment. These factors can also contribute to the worsening of pre-existing skin diseases [2].

This observational cross-sectional study was conducted from May to August 2020 in the Al'Qassim region of Saudi Arabia. The questionnaire was distributed among healthcare workers in the following four government hospitals in the Al'Qassim province: King Saud Hospital, Unaizah; Buraidah Central Hospital, Buraidah; Ar Rass General Hospital, Ar Rass; and Badai General Hospital, Badai. Also, an electronic self-administered survey was sent specifically to healthcare workers in Al'Qassim through social media. A consecutive sampling method was considered in this study. The sample size was calculated for an assumed prevalence of 50% and an absolute precision of 5% using the statistical formula for the cross-sectional survey design. A 95% confidence level was considered to obtain adequate power for analysis. Four hundred and eight participants were included in the study after adding a 6% non-response rate. The present study was approved by the regional bioethical committee of the Qassim region. Informed consent was gained from each patient to enroll in our study.

This study included healthcare workers (e.g., doctors, nurses, lab workers, other allied medical practitioners) who worked during the last four months in Al'Qassim province. All hospital administrative staff and people who had no direct contact with the patients were excluded from the study.

Data was collected using a standardized Nordic Occupational Skin Questionnaire version 2002 [7]. The first part of the questionnaire was about demographic features (age, sex) and work-related questions (occupation, job hours per week, and direct or indirect contact with patients). In the second part, questions were modified to target any self-reported skin changes (i.e., dryness, redness, or itchiness) during the COVID-19 pandemic; this included affected areas of the body, number of episodes during the last two years, factors that worsen the condition (protective gloves and their type, antiseptics/disinfectants, face mask, and protective goggles), factors that improve the condition and the average time spent for hand washing and disinfecting. The last part obtained a history of any pre-existing allergic conditions and symptoms.

To ensure the quality of data obtained, we conducted a pre-test on a sample of healthcare providers before the actual data collection to test the instrument's validity and consistency, resulting in modifying some questions and misinterpretations. We also translated the questionnaire to the local language (Arabic) by experts to avoid misconceptions.

Table 1: Comparison of participants characteristics by gender in a sample of healthcare providers

Table 2: Prevalence of skin changes by multiple factors among a sample of healthcare providers 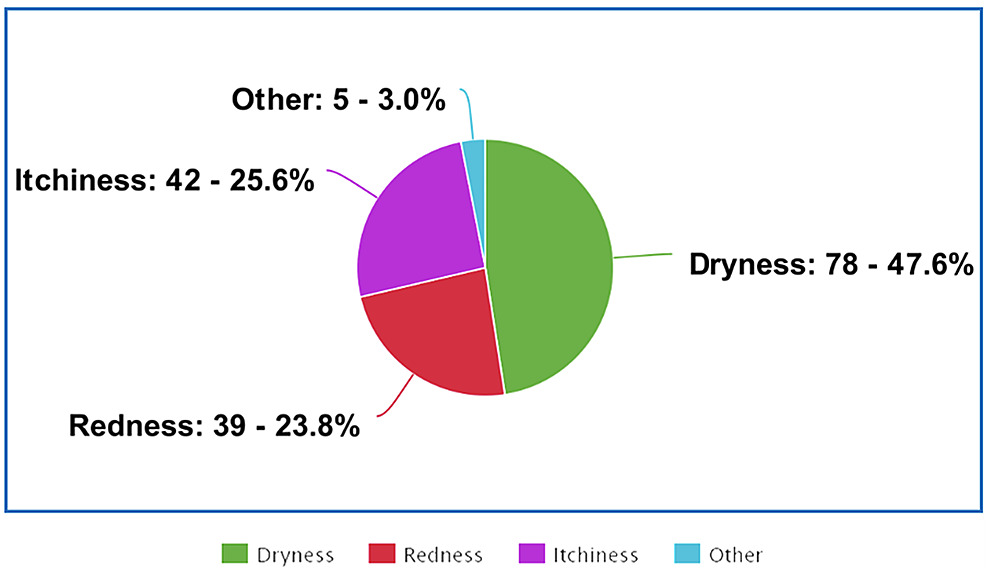 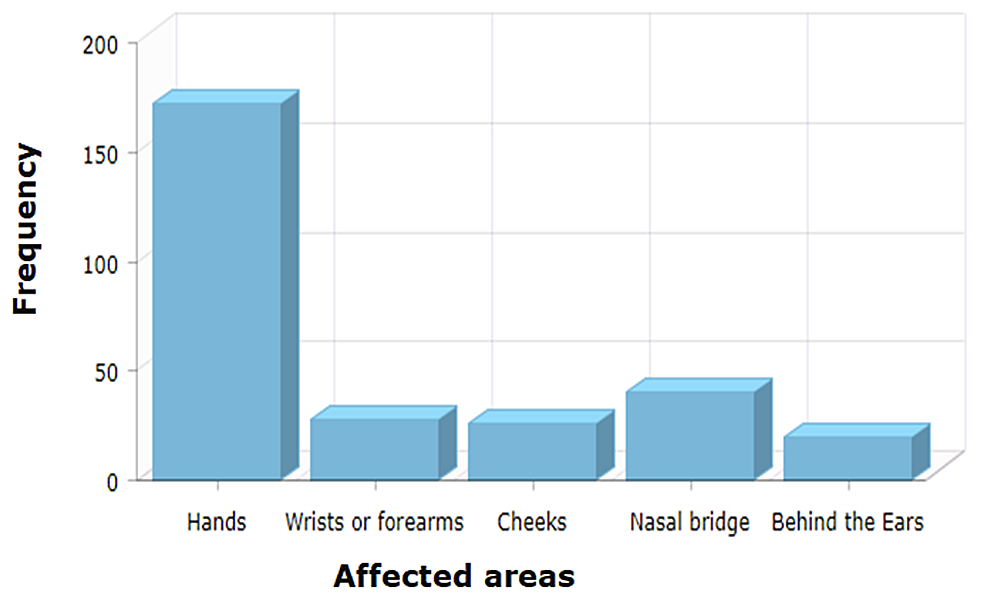 Figure 2: Frequency of the affected areas

* Not the reference category

a: unadjusted (crude) OR

Our primary goal of this study was to estimate the prevalence and investigate the risk factors for occupational-related contact dermatitis among healthcare workers in Al'Qassim Region, Saudi Arabia, during the Covid-19 pandemic.

Our study shows that the commonly reported symptom is skin dryness (92.9%), whereas an Ethiopian study was done in 2018 showed the majority of the participants reported skin redness (28.6%) [5]. However, the hands are the most affected area in both studies. Moreover, both studies show that nurses are more likely to suffer from skin changes than any other healthcare provider. It can be due to the fact that the majority of the participants were nurses, and nurses have more direct contact with patients. A study published in 2020 stated that an increase in hand hygiene could lead to skin changes involving skin dryness [3]. The pandemic undoubtedly has increased the necessity of frequent hand hygiene, thus increasing the unwanted skin changes.

Our study shows that the majority (76%) of healthcare workers wear latex gloves. Surprisingly, another study done during the pandemic in Hubei Province’s hospitals found the adverse effects of latex gloves on the skin [8]. Our results show that the most commonly reported symptom is skin dryness (92.9%). Similarly, the Hubei study results reported the most common symptom is skin dryness (55.8%). Moreover, both of these studies show the second most commonly reported symptom is skin itchiness - 50% and 31.2%, respectively. Skin itchiness could be an undiagnosed latex allergy since it is one of the symptoms of the disease. A study done in 2014 claims that healthcare providers are at high risk of developing latex allergy due to the increase in using latex gloves, the duration of wearing latex gloves, and exposure to the high concentration of latex antigens [9]. Our study shows that plastic gloves can cause less skin irritation than any other type of gloves (12%), whereas the Hubei study shows that none had reported any skin irritation when wearing plastic gloves [8].

Interestingly, our results show that females are more prone to develop contact dermatitis. Nevertheless, a study done in Singapore during severe acute respiratory syndrome (SARS) showed no gender predisposition, but another study published in 2016 claims that females are at a higher risk of developing facial and non-facial contact dermatitis [10, 11]. Moreover, our study shows that pharmacists and medical interns have a higher chance of developing contact dermatitis. On the other hand, the Singaporean study shows no occupation would be at a higher risk. We included in our study 58.6% of nurses, 16.2% of doctors, 8.3% of pharmacists, 4.9% of technicians, 2.9% of medical interns, 5.9% of patient education employees, and 1.2% of researchers, but they only included 14.3% of doctors, 73% of nurses, and 12.7% of clinic assistants and counter clerks. It is hard to conclude which occupation is at higher risk of developing skin changes during the pandemic due to the limitation of having equal representative numbers from each occupation. Our results and their results show that the young age group is more susceptible to developing contact dermatitis with a mean age of 26.4 years and 28.7 years, respectively. A study done in Riyadh states that elderly workers are less likely to have allergic contact dermatitis due to the age-related decrease in their inflammatory response [12].

Our study has some limitations. It does not cover all the hospitals, including private hospitals, in the Al'Qassim region. Also, not all the participants completely filled the questionnaire.

Personal protective equipment has been markedly used during the COVID-19 pandemic, which led to skin manifestations among healthcare workers. In this study, we explored the prevalence and risk factors for occupational contact dermatitis among healthcare workers in Saudi Arabia. Our study showed risk factors for developing contact dermatitis among health care workers, which include a personal history of eye allergies, female gender, and young age. Also, skin symptoms have increased during the COVID-19 pandemic. The most commonly reported skin irritant was hand cleanser, followed by disinfectants and protective gloves. Among the healthcare workers, skin dryness was the highest prevalence, with 92.9%.

© Copyright 2020
Alluhayyan et al. This is an open access article distributed under the terms of the Creative Commons Attribution License CC-BY 4.0., which permits unrestricted use, distribution, and reproduction in any medium, provided the original author and source are credited.

Figure 2: Frequency of the affected areas

Table 1: Comparison of participants characteristics by gender in a sample of healthcare providers

Table 2: Prevalence of skin changes by multiple factors among a sample of healthcare providers

* Not the reference category

a: unadjusted (crude) OR