Electronic cigarettes (E-Cigs) have become more popular among current cigarette smokers due to their perceived safety and targeted marketing as a potential cessation aid to regular smoking. The long-term health effects of E-Cigs use are not known, and the evidence for E-Cigs as a smoking cessation aid has also been inconclusive.

Recent prevalence data revealed that the adult users aged 25-44 years and aged 45-64 years had increased to 4.2% among adults aged 25-44 years and 2.1% among adults aged 45-64 years as per the National Health Interview Survey (NHIS) data in 2018 [1]. In the United States, the proportion of current E-Cigs users has increased to 4.8% of the adult population, and 2.3% of whom also use tobacco use (dual users), and 17.8% of whom are former users [2]. This study sought to assess and compare cardiovascular outcomes between E-Cigs users and tobacco smokers through a self-reported NHIS data questionnaire.

Data were collected from the NHIS Data Registry from 2014, 2016, 2017, and 2018 [3]. Participants were included if they answered items about their use of tobacco and E-Cigs. Respondents who reported having ever been told by a doctor or any other health professional that they had a specific condition (e.g., heart attack, stroke) was determined as having the condition. The primary outcomes were myocardial infarction, stroke, and coronary heart disease.

Once the data were downloaded securely on to a university data server, multiple variables were decoded. Variables specifically related to cardiovascular disease status were delineated along with tobacco smokers, E-Cigs users, dual users, and former smoker’s user groups for the years 2014, 2016, 2017, and 2018.

Demographic data such as age, sex, race, ethnicity, and body mass index (BMI) were obtained. Respondents who reported having ever been told by a doctor or any other health professional that they had a specific condition (e.g., a heart attack or myocardial infarction) were identified as having the condition. The outcomes measured are myocardial infarction, stroke, and coronary artery disease.

E-Cigs users were much younger (mean age 26.7 years) compared to tobacco users (44 years) or other categories of tobacco use. The average BMI was very similar in all the user groups ranging from 27.2 to 28.9 Kg/m2 (Figure 2). 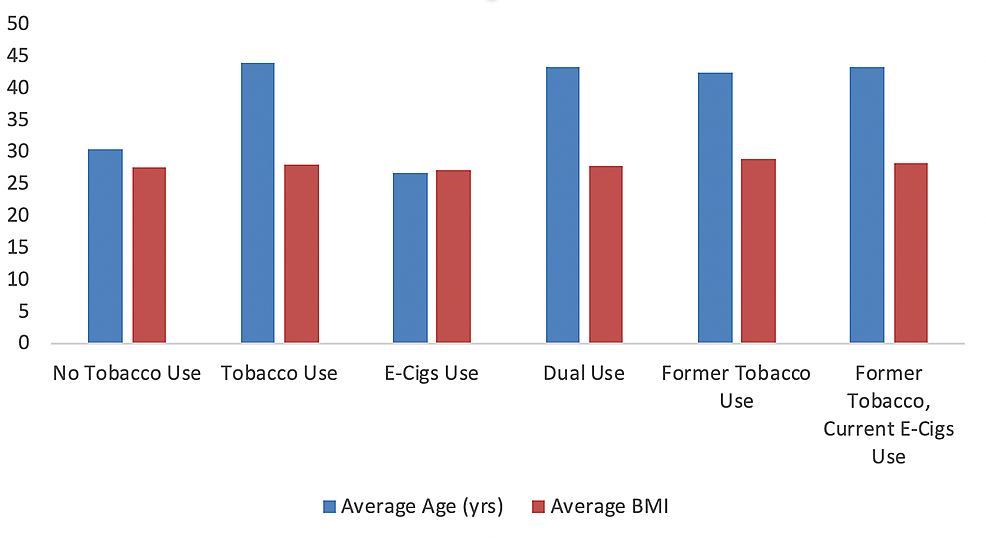 Results from the logistic regression analysis are presented in Table 2. All results use the “no tobacco use” category as the reference group. Dual users (tobacco and E-Cigs users) had the greatest odds of myocardial infarction (OR=5.44), followed by users of tobacco use only (OR=4.52) and current E-Cigs users (OR=4.09). 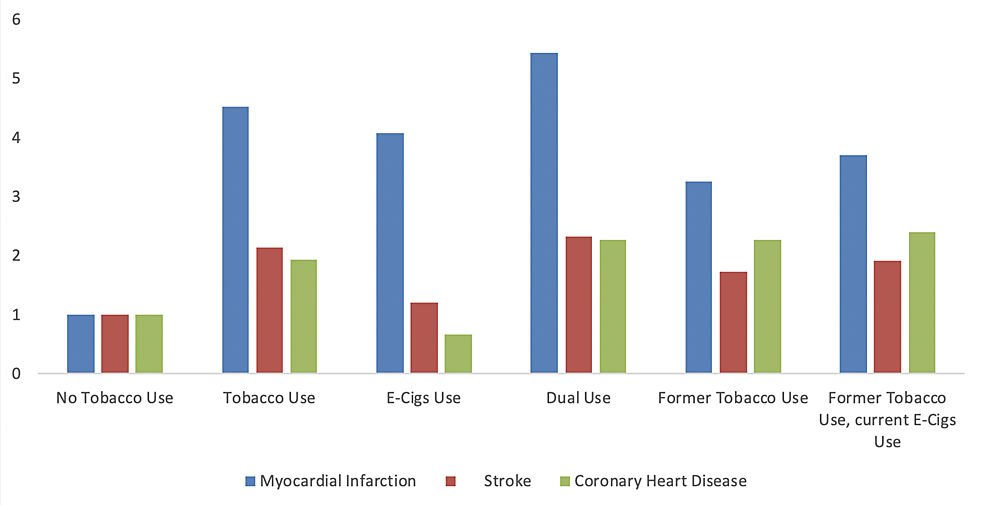 NHIS is a cross-sectional study; therefore, it cannot truly determine cause and effect, but it can determine the association at the time of the study. Different types and designs of E-Cigs and how they are used will yield different exposures. Data were not available to evaluate exposure dose in any meaningful way (i.e., duration of use, frequency of use, and type of product used), which is critical to assess whether using E-Cigs exposure is a risk for cardiovascular disease. The NHIS study data are self-reported which is subject to the recall bias, and one also has to account for social desirability where the individuals in the survey may answer questions less honestly in a way which are socially acceptable and desirable [7]. Further, when one is reviewing self-reported data, subject fatigue, memory burden, and confusion when answering the questions must be considered. There is always a discrepancy among participants’ responses and clinical validation of the diagnosis, as reported from previous studies [8,9]. The definition of E-Cigs usage and the amount and duration of its usage have not been detailed enough, which may indicate that the data for E-Cigs users may not be accurate when accounted for several risk factors.

Another drawback of the study is that the participants may already have had cardiovascular morbidity such as myocardial infarction, coronary artery disease, and stroke before using E-Cigs. Factors such as family history and medication usage, which may play a role in cardiovascular disease, were not documented from the questionnaire. This study, along with other cross-sectional E-Cigs studies, may not infer causality, but this is one among the first studies that suggest there are harmful cardiovascular outcomes associated with E-Cigs use, especially when paired with the use of tobacco.

Part of this data were presented as an oral presentation at the American College of Cardiology, 68th Annual Scientific Session, March 16-18, 2019.

© Copyright 2020
Vindhyal et al. This is an open access article distributed under the terms of the Creative Commons Attribution License CC-BY 4.0., which permits unrestricted use, distribution, and reproduction in any medium, provided the original author and source are credited.