To assess the differences in demographics and laparoscopic hysterectomy type by comorbid obesity and to assess the risk of in-hospital mortality due to obesity and other comorbidities.

The majority of the inpatients were middle-age 36-50 years (83.1%) and White (67.7%). Comorbidities were seen in a higher proportion of obesity cohort with most prevalent being hypertension (53.6%) and diabetes (23.9%), followed by depression and hypothyroidism (15.8% and 15.4%, respectively). Inpatients with comorbid obesity had 4.6 times (95% CI 2.79-7.69) higher odds for in-hospital mortality compared to non-obesity cohort. There was statistically no significant association between type of laparoscopic hysterectomy and in-hospital mortality.

According to the Centers for Disease Control and Prevention (CDC), the prevalence of obesity increased from 30.5% to 42.4% from the years 1999-2000 through 2017-2018. The prevalence was highest among middle-aged women (44.8%) and middle- and lowest-income groups. The medical cost of obesity has been estimated at $147 billion in the United States, with the average medical cost $1,429 higher in obese [6].

Obesity is often associated with comorbidities like hypertension, diabetes mellitus, and coronary disease and studies show a higher incidence of perioperative deep vein thrombosis, pulmonary embolism, and surgical site infection [7,8]. However, studies examining the role of obesity in laparoscopic gynecological surgeries have discrepant results with some showing increased risk of complications and conversions to laparotomy, and others showing no difference in between the different weight groups [9,10].

In our study, we aim to assess the differences in demographics and laparoscopic hysterectomy type by the presence of comorbid obesity, and next is to assess the risk of in-hospital mortality due to obesity and other comorbidities.

We conducted a cross-section data analysis using the healthcare cost and utilization project’s (HCUP) Nationwide Inpatient Sample (NIS) data from 2012 to 2014. The NIS provides patient records from about 4,400 non-federal hospitals and covers 45 states in the US. Diagnostic and procedure information in the NIS is identified using the International Classification of Diseases, ninth edition (ICD-9) codes, and Clinical Classification Software (CCS) codes [11].

Demographic variables studied included age (18-35 and 36-50 years), and race (white, black, Hispanic, and Asian/Pacific Islanders, Native American, and others). The comorbid diagnosis for depression, diabetes, hypertension, and hypothyroidism were identified using ICD-9 diagnosis codes. We measured the in-hospital mortality between obesity and non-obesity cohorts and in the NIS, we in-hospital mortality is reported as all-cause [12].

We used cross-tabulation and descriptive statistics to discern the demographic and comorbidities differences in the sample population undergoing laparoscopic hysterectomy by comorbid obesity. We used another model of cross-tabulation and descriptive statistics to evaluate the demographic, comorbidities, and hysterectomy type in the sample population by in-hospital mortality. Logistic regression analysis was used to evaluate the demographic and comorbidities that increase the risk of association with in-hospital mortality. A P-value of less than 0.01 was used to determine the statistical significance in all analyses and was conducted using the Statistical Package for the Social Sciences (SPSS), version 26 (IBM Corporation, Armonk, NY).

Individual identifiers were used to protect the patient's identity and health-related information. So, the use of de-identified NIS database in this study does not require approval from the institutional review board [11]. 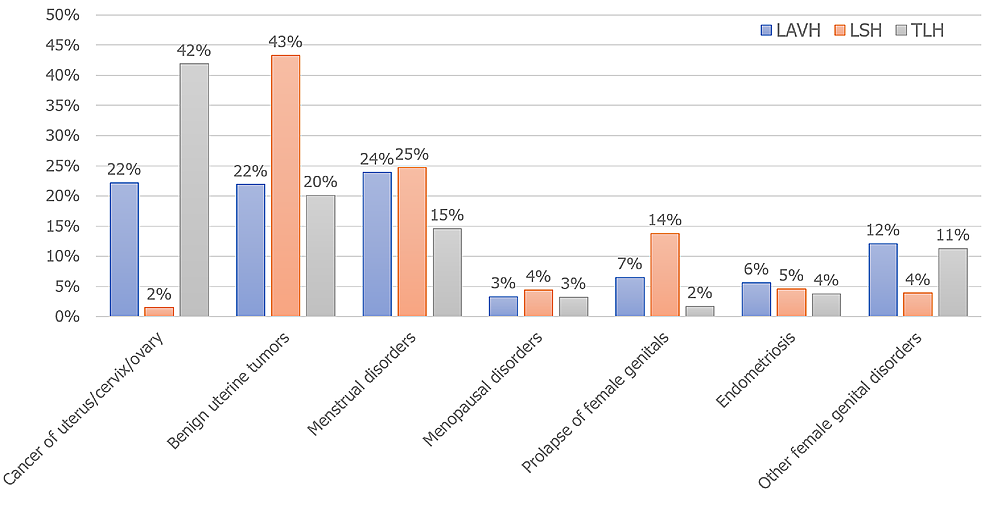 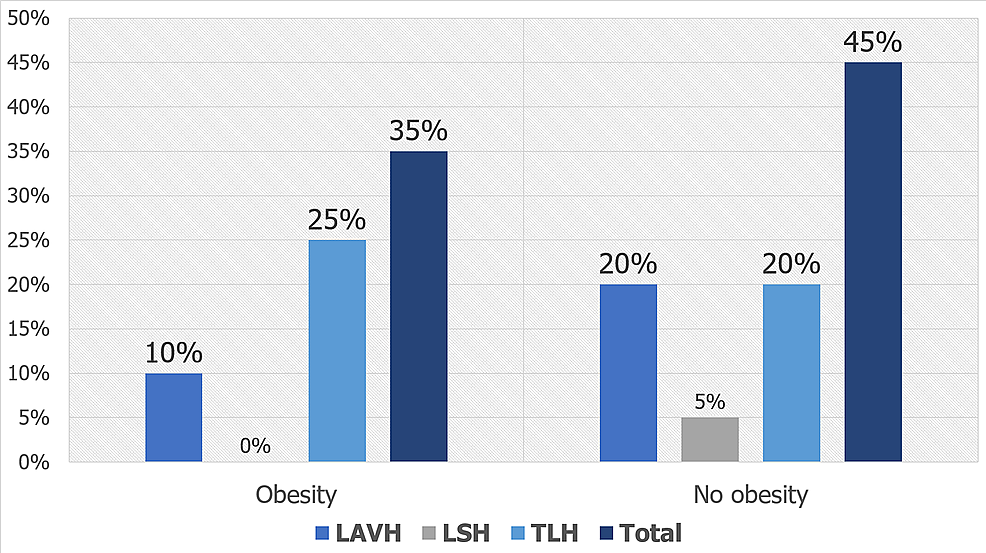 In this study, utilizing the NIS data analysis of 119,890 inpatients hospitalized for primary procedure: laparoscopic hysterectomy, we found that 17,370 (14.5%) had comorbid obesity. When the obese and the non-obese cohorts were compared, we found that there was a higher proportion of comorbidities in the obese cohort with hypertension being the most prevalent, followed by diabetes, depression, and hypothyroidism. Patients with comorbid obesity had a 364% higher risk of in-hospital mortality compared to the non-obese cohort.

More than four-fifth of the inpatients were middle-aged adults (36 to 50 years, 83.1%), with the obesity cohort older than non-obesity. The CDC health trend data also reveals that the prevalence of obesity was highest among middle-aged women and the black population [6]. In our research, 67.7% of total inpatients were white, but when compared to non-obesity, a higher proportion of obese inpatients were black. We found that the Asian/Pacific Islanders and Hispanic populations were at 6.5 times and 2.6 times, respectively, higher risk of in-hospital mortality compared to the White population. This may be because racial minority groups are disproportionately affected by chronic diseases compared to their white counterparts due to lower socioeconomic status and education level, as well as a lack of accessibility to health care and nutritious food. These factors can hinder such groups from receiving adequate medical care and nutrition, leading to an increased incidence of obesity and the risk of complications following surgical procedures [13].

Obesity was deemed to be a relative contraindication for laparoscopy as they are at a higher risk of developing atelectasis as a consequence of the upward displacement of the diaphragm following carbon dioxide insufflation. The loss of muscle tone due to anesthesia and the Trendelenburg position leads to a more definite reduction in functional residual capacity in obese [14-17]. In addition, its association with other comorbid conditions can also negatively impact the outcomes of surgical patients [13,18,19]. In this study, we found that the most common comorbidities were hypertension (53.6%) and diabetes (23.9%). We found a significant association between comorbid obesity and in-hospital mortality in the inpatients for laparoscopic hysterectomy after controlling for demographics and chronic comorbidities. Also, the largeness of the abdominal wall results in difficult access to and visualization of the abdominal cavity, pneumoperitoneum maintenance, and laparoscopic instrument handling [20].

Studies exploring the complication rates in obese and non-obese patients have produced conflicting results. Some have found increased complications and laparo-conversions in obese patients, while other studies suggest that there are no relevant differences between the weight groups [9,10,21]. In a review of 2,530 laparoscopic hysterectomies, those with a BMI higher than 30 kilograms/square meter had a two-fold risk of unintended laparotomy [20,22]. A study by O'Hanlan et al. reported comparable mean operating time, mean operative blood loss, mean length of hospital stay, and complication rates in all BMI groups [18].

While these studies compare the complication rates in the obese and non-obese groups, there is a dearth of literature on the differences in inpatient mortality in at-risk patients undergoing laparoscopic hysterectomy. Therefore, our goal was to examine this outcome comparison because, with the increasing prevalence of obesity, it is of the utmost importance to study, introspect, and implement practices to give a safe outcome to patients. In our study, patients with comorbid obesity had 4.6 times and about 364% higher risk of in-hospital mortality compared to the non-obesity cohort. This was in accordance with a prospective, multi-center study of 118,707 patients who underwent non-bariatric general surgery where higher mortality risk was observed in underweight and morbidly obese [23].

Of the 0.1% (35 out of 17,370) of the in-hospital mortality that was seen in the obesity cohort in our study, a higher number of inpatient deaths were reported in patients who underwent TLH and LAVH, while none were reported in those undergoing LSH. There was no statistically significant association between the type of laparoscopic hysterectomy and in-hospital mortality. Milad et al. reported different findings that showed LAVH to be associated with higher morbidity than LSH [24].

The findings of this study must be seen in the light of some limitations. Firstly, the NIS is an administrative database and not a detailed medical and patient record. We categorized laparoscopic hysterectomy based on ICD-9 procedure codes which are subject to possible miscoding and unable to get details of surgical techniques used. Also, NIS data be deficient in preoperative information: prior abdominal surgeries, size, and descent of the uterus. Next, as ICD-9 diagnostic codes were used to identify comorbid obesity and so it could not be stratified into different classes. Studies have shown that an “obesity paradox” exists, where moderate obesity is protective and mortality is most likely in a morbidly obese individual [25]. However, this phenomenon could not be tested in our study.

Analysis of national-level data shows that obese patients have a higher risk of in-hospital mortality by 364% compared to non-obese patients. Women with obesity had a higher proportion of chronic comorbidities including hypertension, and diabetes. There was no significant association between the laparoscopy procedure type and in-hospital mortality, yet we found that a higher proportion of inpatient deaths were reported in those who underwent TLH and LAVH. More studies should focus on improving hospital outcomes and quality of life post-laparoscopy in obese women.

© Copyright 2020
Robert et al. This is an open access article distributed under the terms of the Creative Commons Attribution License CC-BY 4.0., which permits unrestricted use, distribution, and reproduction in any medium, provided the original author and source are credited.