A case of cervical neuroendocrine carcinoma (NEC) of the uterine cervix (NECUC) was presented. After total hysterectomy with bilateral salpingo-oophorectomy and adjuvant chemotherapy, a left renal tumor and a pancreatic lesion developed and were both diagnosed on pathological examination as metastases from NEC. In addition, a brainstem metastasis causing neurologic signs developed. The brain lesion was treated by stereotactic radiotherapy (SRT) and the renal and pancreatic lesions by stereotactic body radiotherapy (SBRT). Despite control of the renal and pancreatic lesions, multiple small lung metastases developed later. Recurrence and newly developed brain metastases were treated by repeat stereotactic radiosurgery (SRS)/SRT successfully. Chemotherapy was continued and controlled the lung metastases until three and a half years after the initial operation of the uterus.

Neuroendocrine tumors (NETs) are uncommon and aggressive malignancies derived from neuroendocrine cells. NETs are typically located in the pancreas, gastrointestinal tract (GI tract), and lungs [1]. Neuroendocrine carcinoma (NEC) is a poorly differentiated type of NET. Rarely, NECs may also occur in other organs such as the female genitalia. NEC of the uterine cervix (NECUC) is a rare malignancy constituting fewer than 3% of all cervical tumors [1,2]. NECUC are common in perimenopausal females and present with abnormal vaginal bleeding and mimic endocervical carcinomas, usually with no distinguishing symptoms. However, the biology of NECUC differs from that of squamous cell carcinoma or adenocarcinoma of the cervix in a number of aspects. For example, NECUC is more likely to have invaded the lymphovascular space and to spread to the regional lymph node basin at the time of diagnosis. Local and distant relapses also occur more often in NECUC, and the five-year overall survival is significantly poorer at around 30% compared to >65% for squamous cell carcinoma and adenocarcinoma of the cervix [1]. Thus, the aggressive nature of NECUC resembles that of small cell lung cancer that, at the time of initial diagnosis, is rarely localized and mostly locally advanced or metastatic.

We herein report a case of NECUC. After total hysterectomy and bilateral salpingo-oophorectomy with an initial diagnosis of localized NECUC, the patient received adjuvant chemotherapy. On subsequent follow-up, she developed a left renal tumor, pancreatic lesion, and brain metastasis. All of these lesions were successfully treated by stereotactic irradiation. Lung metastases, which developed later, were also controlled with continuing chemotherapy.

After a 46-year-old woman complained of metrorrhagia, a uterine cervix tumor was detected (Figure 1). 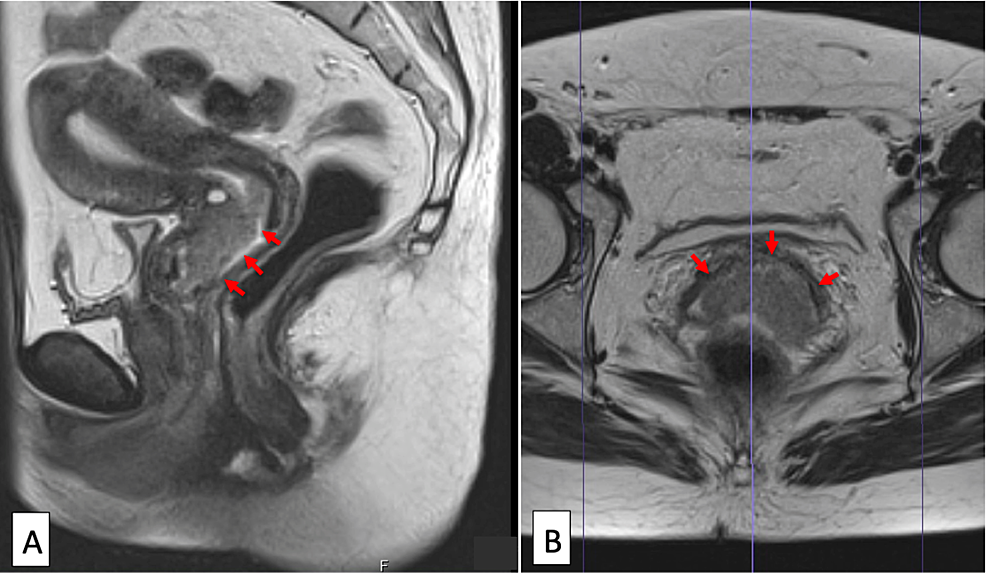 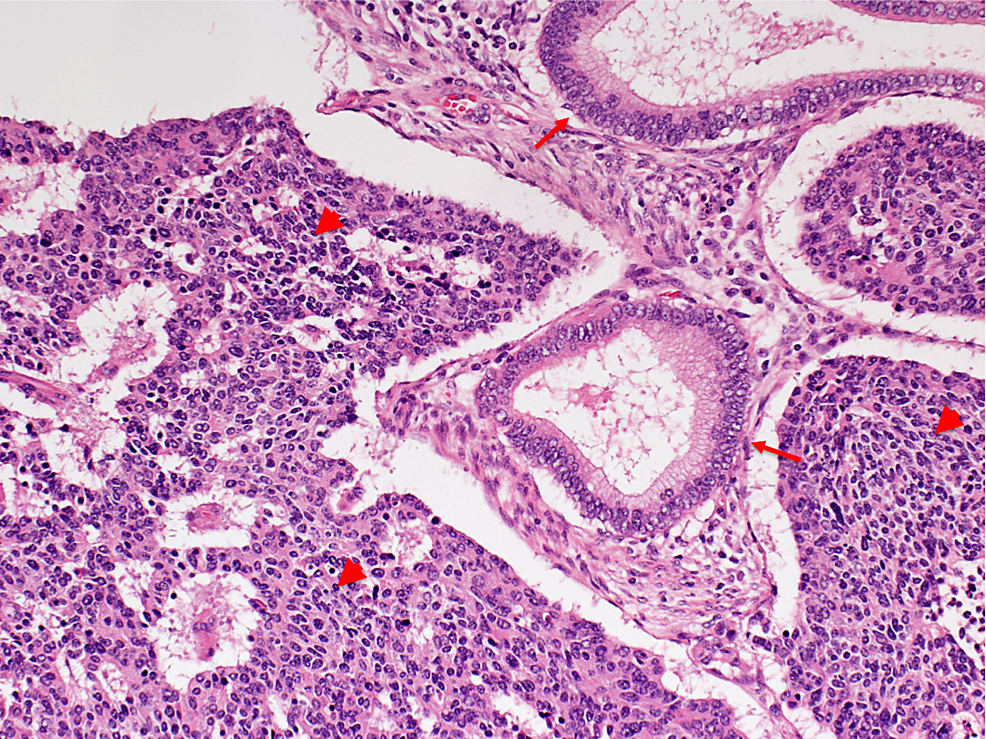 Immunohistochemical study revealed positive results for chromogranin A, synaptophysin, CD (cluster of differentiation) 56, and p16 in the NEC component. Adjuvant chemotherapy with CPT-P (Irinotecan and Cisplatin) was given. One year after the operation, a mass lesion was detected in the left kidney on computed tomography (CT) (Figure 3A). In addition, positron emission tomography with 2-[18F]fluoro-2-deoxy-D-glucose (FDG-PET) disclosed FDG-high-uptake tumors in the left kidney (Figure 3B) and pancreas (Figure 3C). 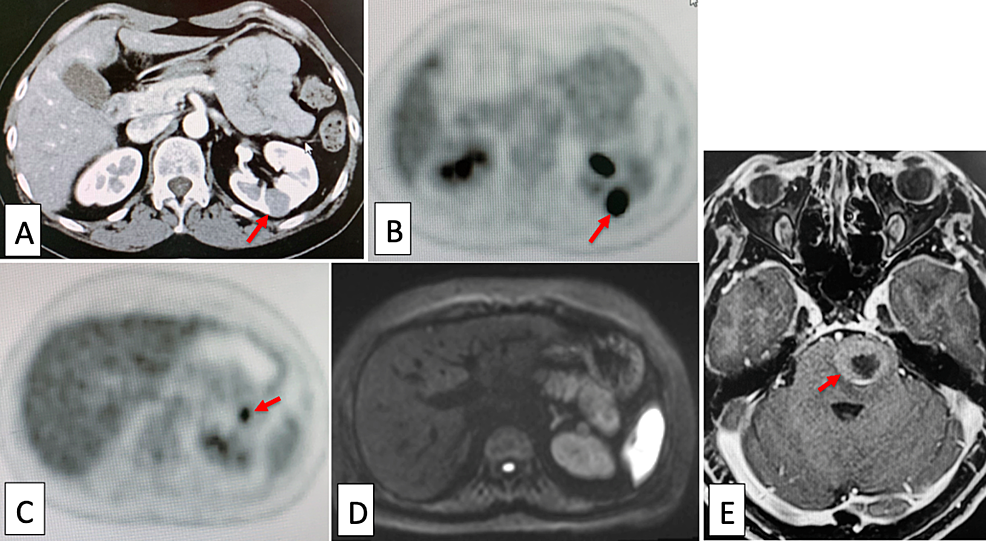 Both tumors were diagnosed as NEC metastases by biopsy. Tumor cells of both lesions were chromogranin A, CD56, and synaptophysin positive. Around the same period, she developed dysarthria and gait disturbance due to right-sided leg motor weakness, which was caused by a brainstem metastasis (Figure 3E). This was treated by lineac-based stereotactic radiotherapy (SRT, 30 Gy/5 fractions [fx.]) with TrueBeamSTx (Varian, Tokyo) with ExacTrac system (BrainLAB, Tokyo) (Figure 4). 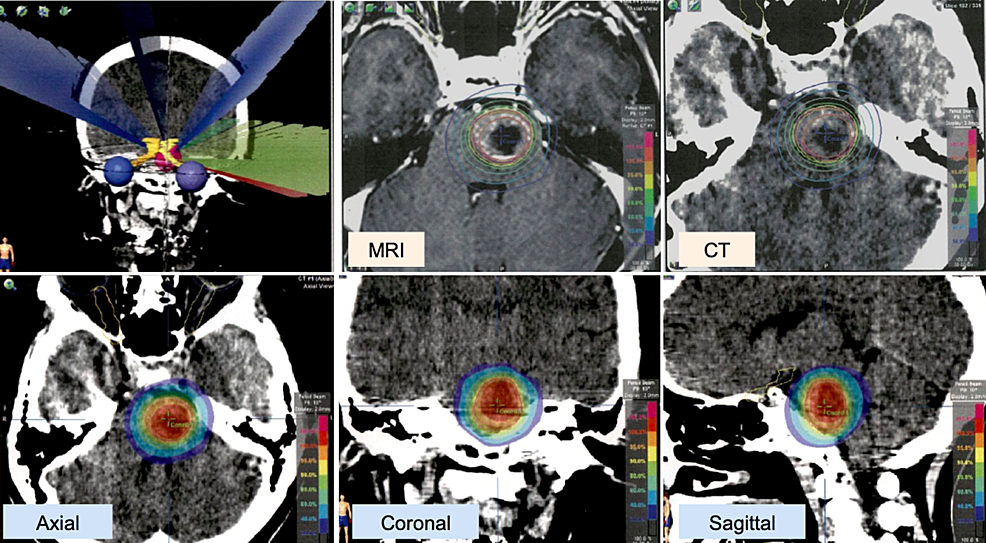 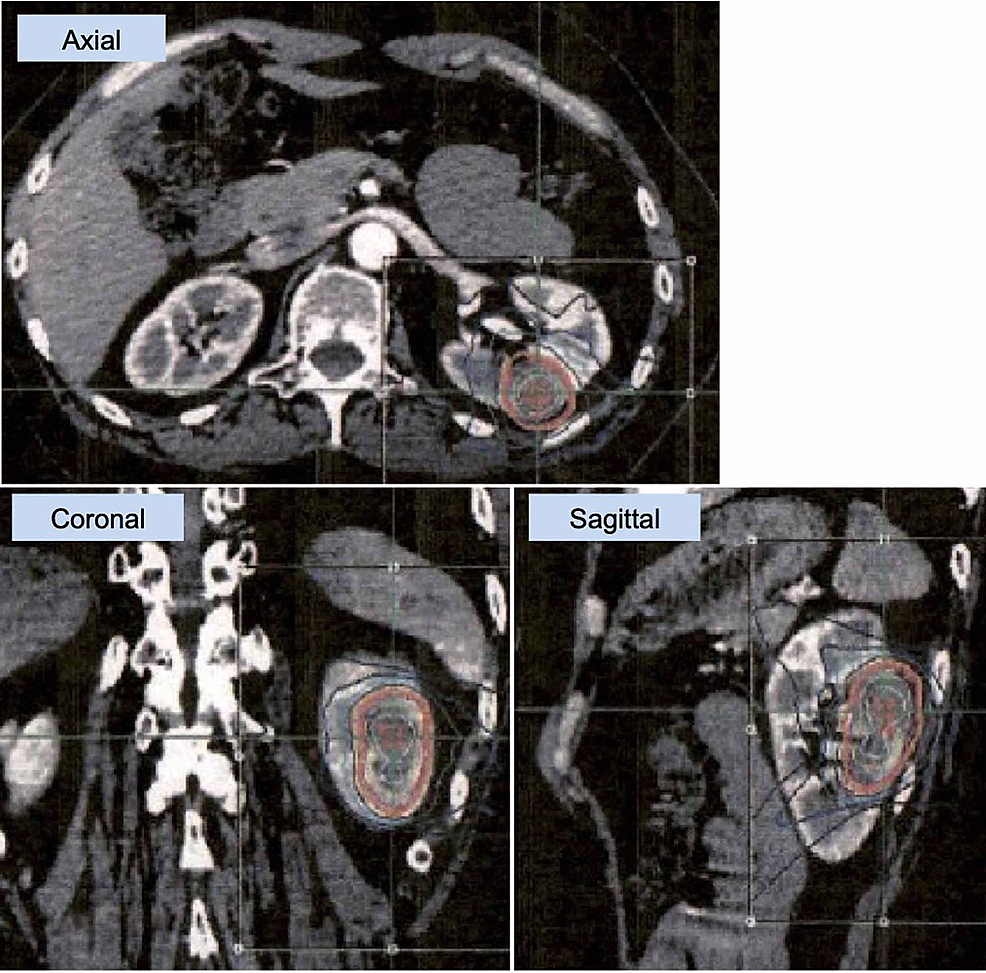 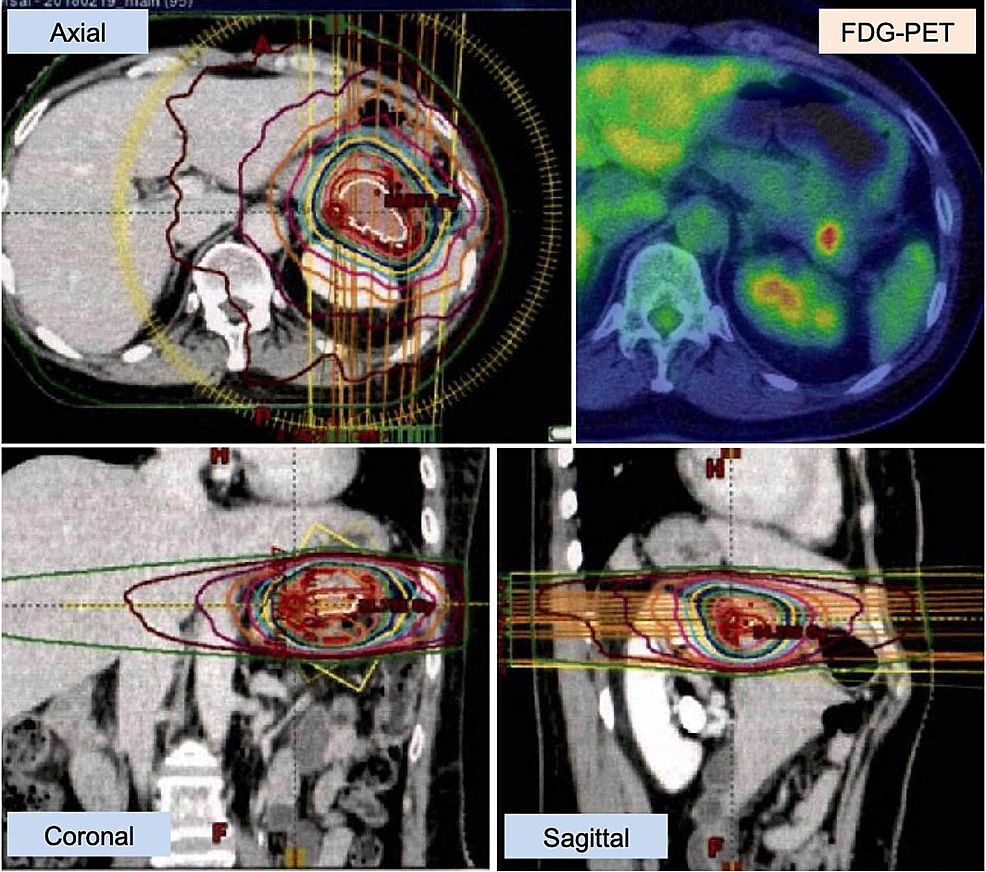 Later, multiple small lung metastases developed and chemotherapy with pacritaxel and cisplatin or bevacizumab was continued. In addition, she developed new brain metastases and brainstem metastasis recurrence, which were treated by stereotactic radiosurgery (SRS) (20-21 Gy) and SRT (24 Gy/3 fx.) with Gamma Knife with eXtend system (Elekta, Tokyo). Totally 10 brain tumors were treated, including three treated twice, and all were controlled. Both the renal and pancreatic metastases disappeared. The lung lesions were also stable at the end of the follow-up. Her condition remained stable with only slight motor weakness in the left leg until three and a half years after the initial operation of the uterus.

NETs are subdivided into well-differentiated NETs, including NET grade 1 (also known as typical carcinoid) and NET grade 2 (also known as atypical carcinoid), and poorly differentiated NEC [3]. NECUC is a rare aggressive histological variant of cervical cancer. Ishikawa et al. summarized the cases of NETs of UC in a multi-center retrospective study [4]. Among total 193 cases, diagnoses were atypical carcinoid tumor in 37, small cell NEC in 126, large cell NEC in 22, and NET, and otherwise classified in eight. There is no standard chemotherapy regimen for NECUC, and the regimens similar to the treatment routinely used for small cell lung cancer are selected [1]. Cisplatin/carboplatin with etoposide (EP) has been the most commonly used treatment regimen. EP combined with other agents such as bleomycin, cyclophosphamide, or doxorubicin has also been reported [1,4]. Other commonly used cytotoxic regimens in the primary therapy setting (neoadjuvant or adjuvant) are cisplatin/carboplatin and paclitaxel and cisplatin combined with irinotecan. Other regimes such as 5-fluorouracil/cisplatin, vincristine/cisplatin/bleomycin, vincristine/adriamycin/cisplatin, and irinotecan/cisplatin/paclitaxel have only rarely been used [1]. In women with recurrent NECUC, EP alone or in combination with other cytotoxic drugs has also been the most commonly used cytotoxic regimen. Targeted therapies and immune-checkpoint inhibitors have also been tried [1]. In the present case, chemotherapy has been continued with similar regimens for adjuvant after the initial surgery and for salvage after development of bilateral lung metastases.

In the present case, we administered stereotactic irradiation to all of the three lesions that developed after the initial surgery of the primary uterine lesion and following adjuvant chemotherapy. Stereotactic irradiation delivers a higher biological effective dose to the tumor with sharp dose escalation in a shorter treatment time course. The efficacy of SRS/SRT for brain metastases has been well established [5,6]. In the present case, all brain lesions have been controlled so far, though three of the 10 lesions required treatment twice. Recently, more and more cases have been treated by SBRT for primary or metastatic body lesions. Some papers have been published on SBRT for primary pancreatic carcinoma [7-9]. Wei et al. summarized the treatment results of SBRT for pancreatic cancer, and listed the reported series of SBRT [9]. The delivered dose varied among reported series, 15-25 Gy in a single session and 24-45 Gy in 3-5 fractions. In this case we used a rather conservative fractionated SBRT using VMAT (50 Gy in 20 fractions), out of concern for possible adverse effects to the duodenum adjacent to the radiation field. Some papers have also been published on SBRT for primary renal cell carcinoma. Correa et al. reviewed the treatment results of SBRT for primary renal cell carcinoma [10]. In addition, recently some studies on SBRT for oligometastases have become available [11,12]. Suh and Cho showed the results in metastases from non-small-cell lung carcinoma (NSCLC) [11]. Sutera et al. showed the results in metastases from various malignancies (NSCLC, SCLC, colorectal adenocarcinoma, head and neck, squamous cell carcinoma, breast carcinoma and prostate adenocarcinoma) [12]. In our patient, all the detected lesions, brain, left kidney, and pancreas metastases, were treated by stereotactic irradiation at that time. Later, tiny bilateral lung metastases developed but have not deteriorated with continuing chemotherapy.

A rare case of NECUC developing renal, pancreatic, and brain lesions, after surgery of the primary site and adjuvant chemotherapy, was described. All of these lesions were treated with stereotactic irradiation successfully and chemotherapy for lung metastases was continued to keep the patient’s condition stable. Local treatment of stereotactic irradiation, with systemic chemotherapy, might be beneficial to control the disease.

© Copyright 2020
Mori et al. This is an open access article distributed under the terms of the Creative Commons Attribution License CC-BY 4.0., which permits unrestricted use, distribution, and reproduction in any medium, provided the original author and source are credited.