Hemangioblastomas are histologically benign tumors of vascular origin that are usually cystic, occur in the cerebellum, and represent approximately 2% of all intracranial tumors [1-3]. Supratentorial hemangioblastomas are exceedingly rare, with only 116 cases reported in the literature from 1902 to 2004 [1,4-5]. In 30% of hemangioblastomas, there is an association with von Hippel Lindau (VHL) disease [2-3]. Von Hippel-Lindau complex, or von Hippel-Lindau syndrome, is a genetic disorder with an autosomal dominant inheritance pattern with variable penetrance characterized also by retinal angiomatosis, multiple renal, pancreatic, or hepatic cysts, pheochromocytoma, renal cancer, and the potential for malignant transformation in multiple organ systems. Sporadic pituitary stalk hemangioblastomas are extremely rare and almost always are associated with VHL disease.

We present a 36-year-old male who was admitted to our department due to the gradual worsening of the left eye vision. Ophthalmologic evaluation of the patient’s retina showed no remarkable ﬁndings while ocular examination showed visual acuity 8/10 on the right eye and 1/10 on the left eye. The formal visual field testing, by using the standard Goldman perimetry study, revealed a left upper temporal quadrant deficit. Further neurological examination was normal. No endocrine dysfunction was identified preoperatively. Brain computed tomography (CT) scan revealed a sellar mass with sellar enlargement and dorsum sella erosion (Figure 1). Further investigation with brain magnetic resonance imaging (MRI) demonstrated a 3 cm sellar mass, intensely and homogeneously enhancing after the intravenous (IV) administration of gadolinium, with suprasellar extension, inferior displacement of the infundibulum, and upward displacement of the optic chiasm and anterior communicating artery complex (Figures 2-4). 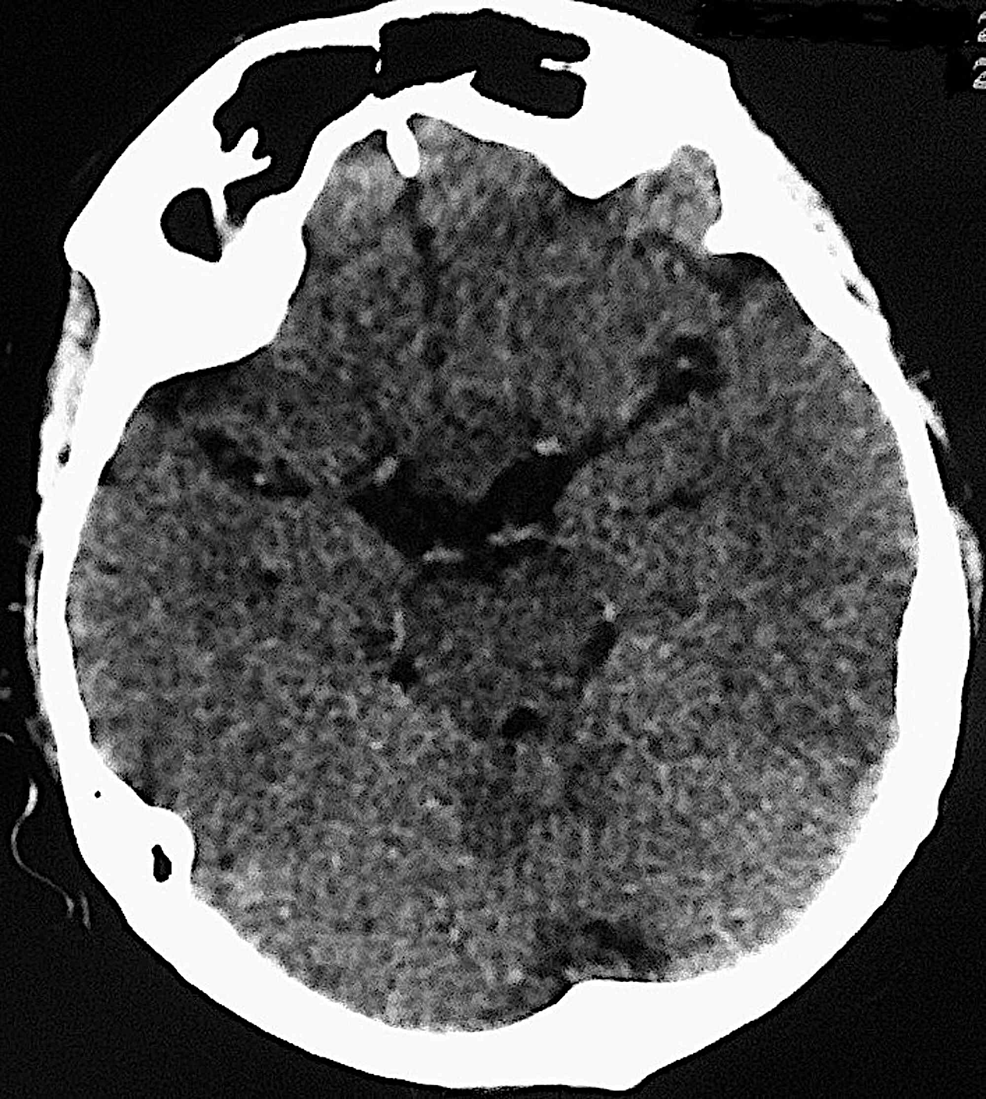 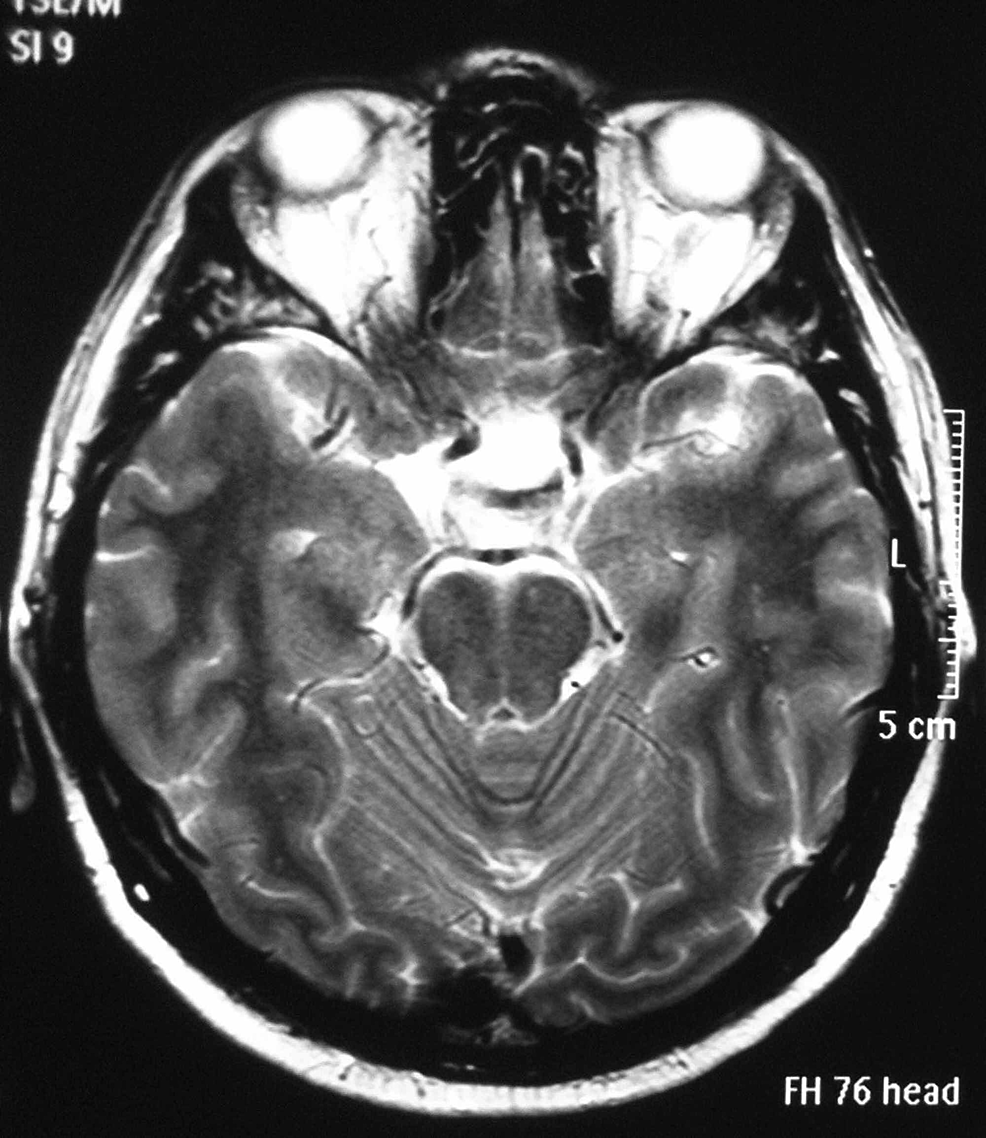 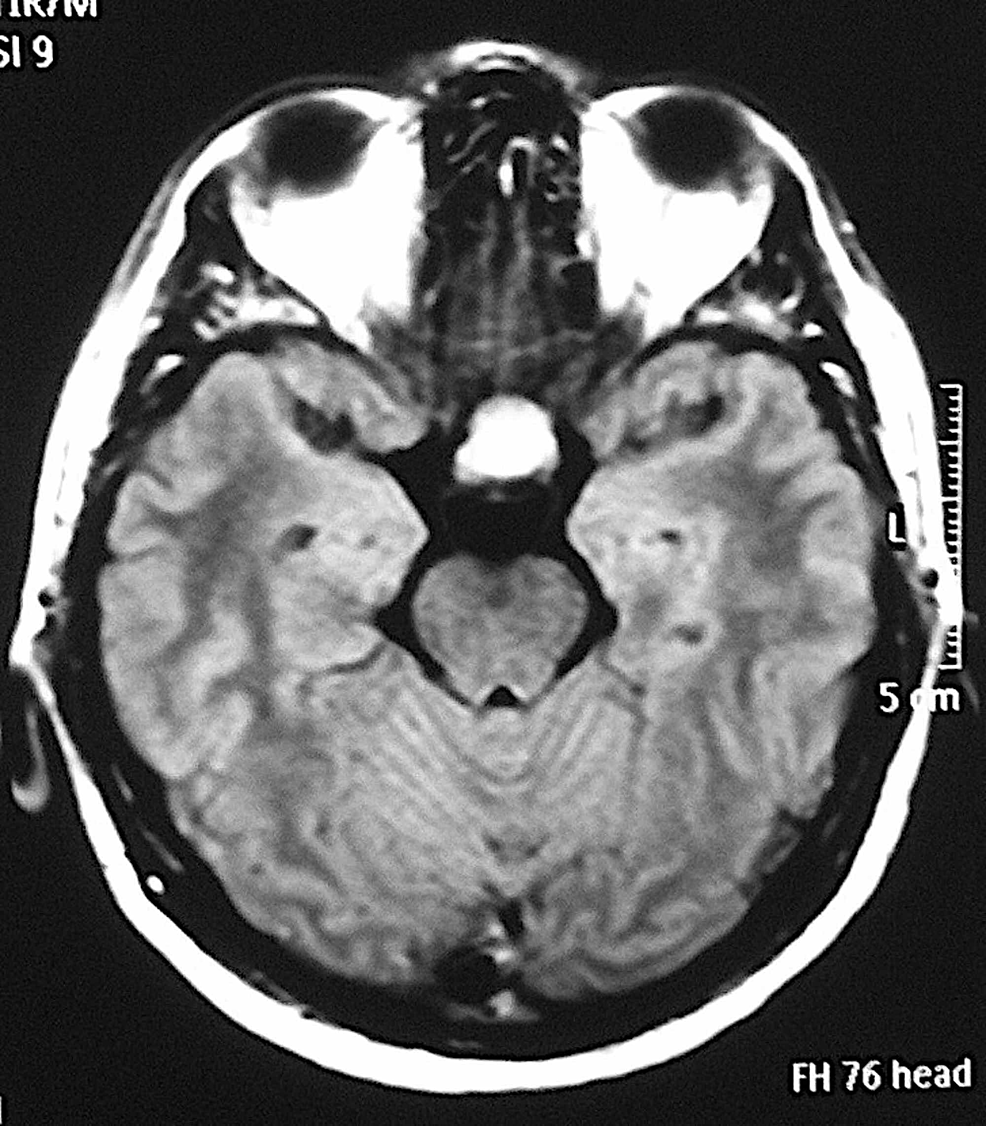 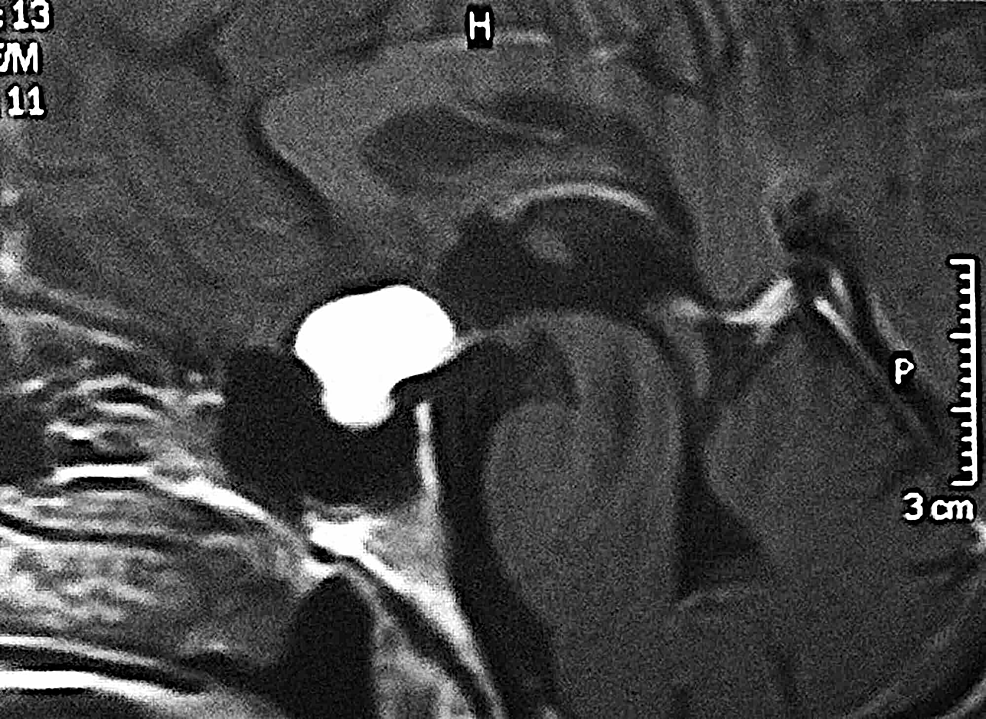 The patient underwent a surgical operation via a transglabellar approach (Figures 5-6). A highly vascularized tumor was recognized and total resection was achieved (Figures 7-8). The excised surgical specimen was sent for histology (Figures 9-15). 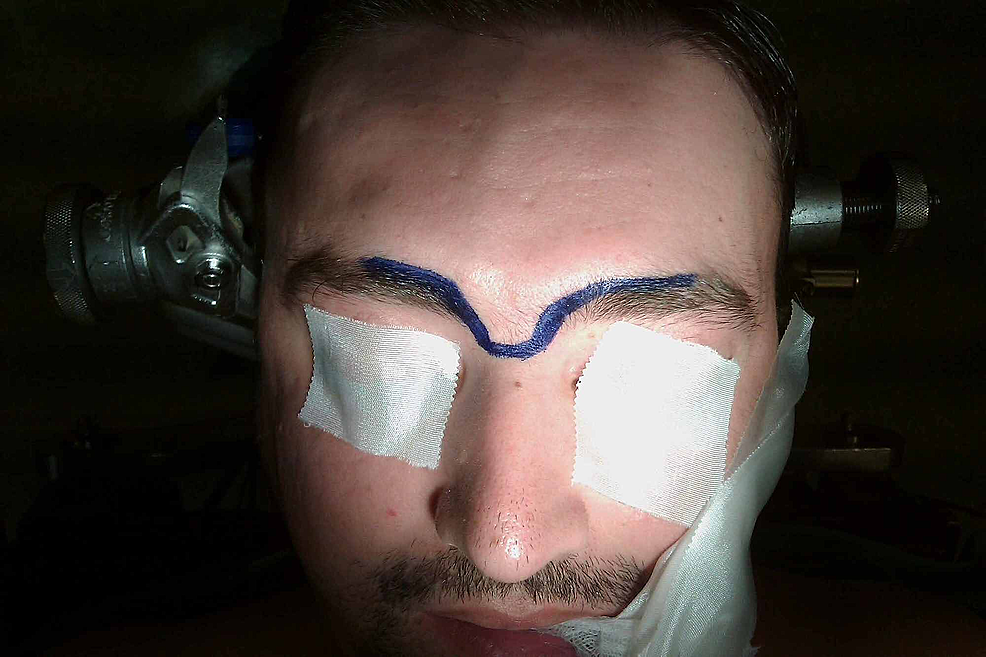 Figure 5: Skin incision between the eyebrows crossing the nasion 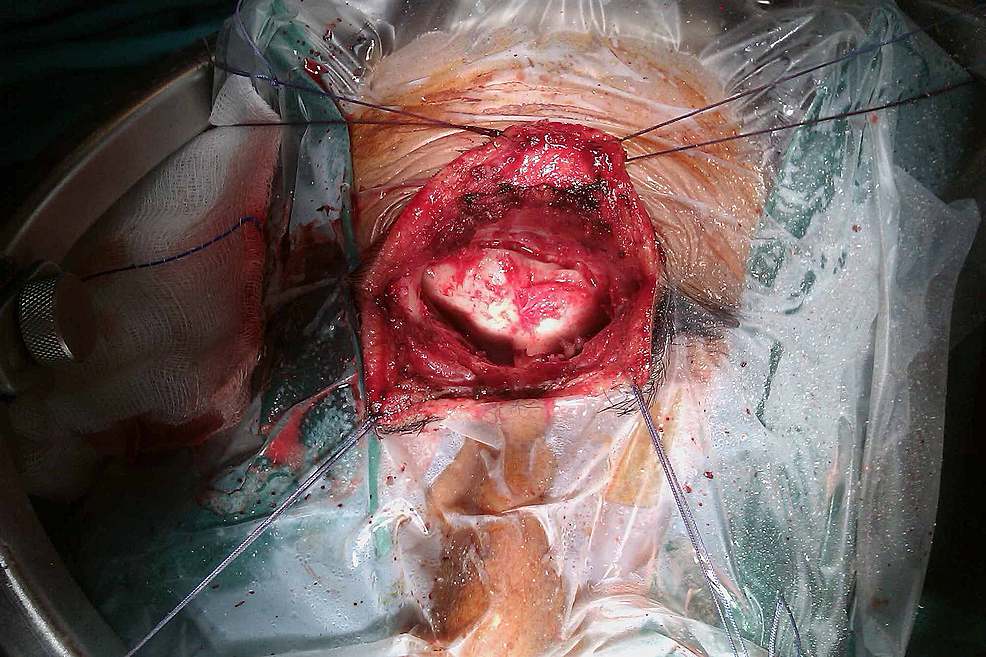 Intraoperative image showcasing the suprasellar tumor (black asterisk), the left A1 being displaced by the tumor (black arrow) and the left optic nerve and optic chiasm (white arrow) 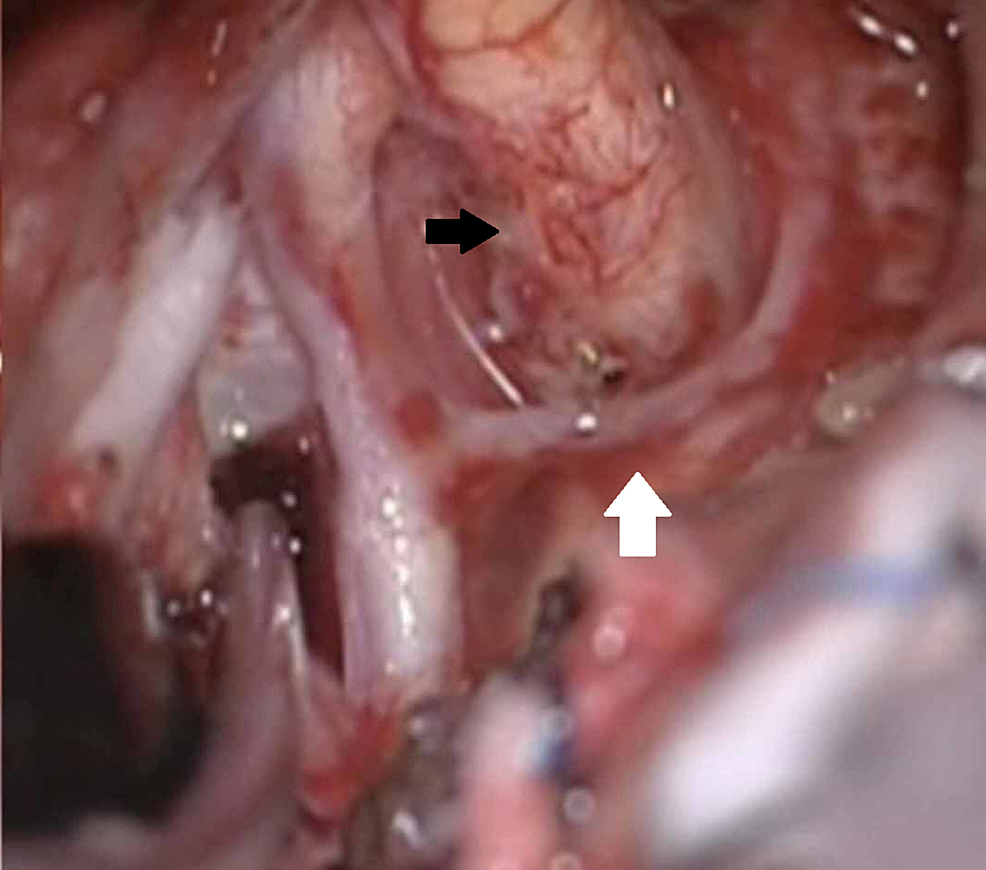 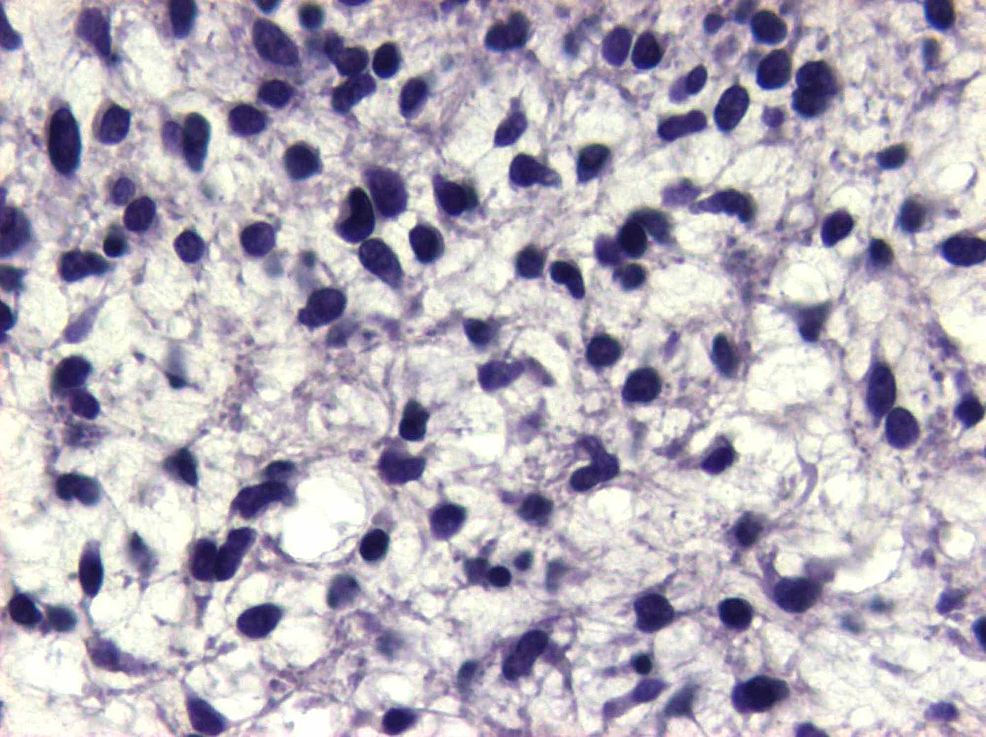 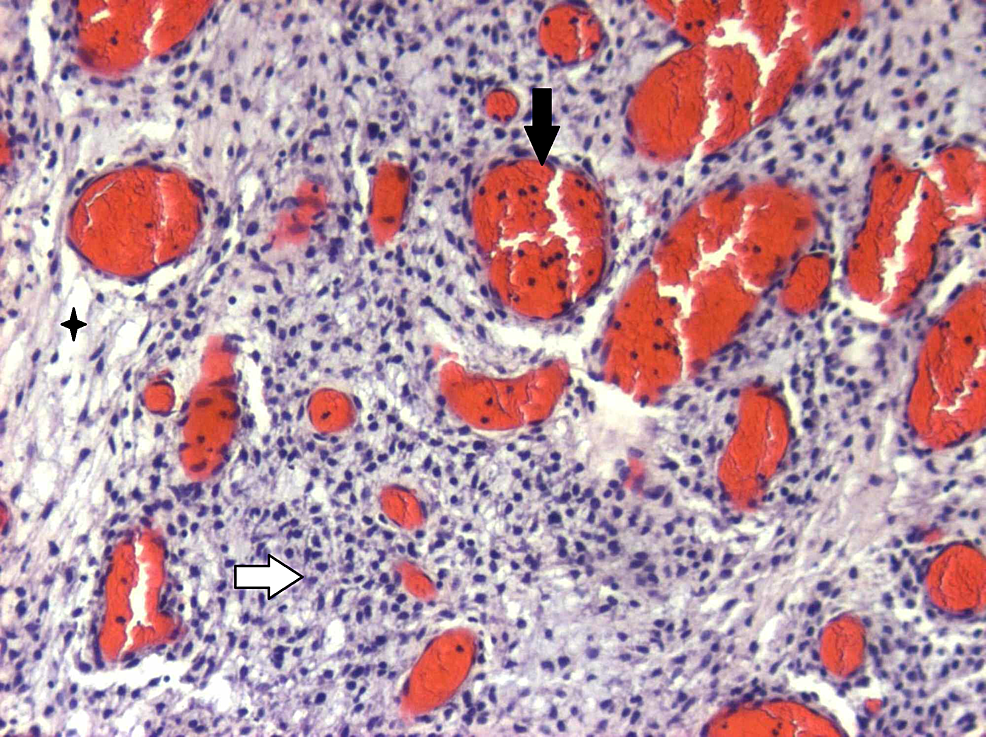 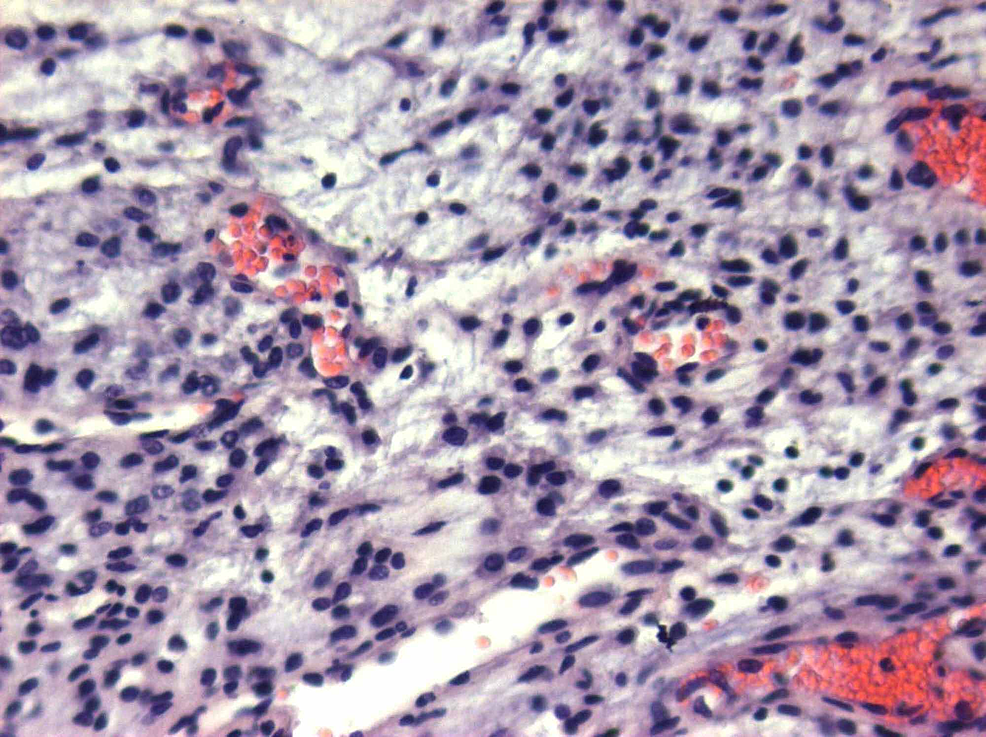 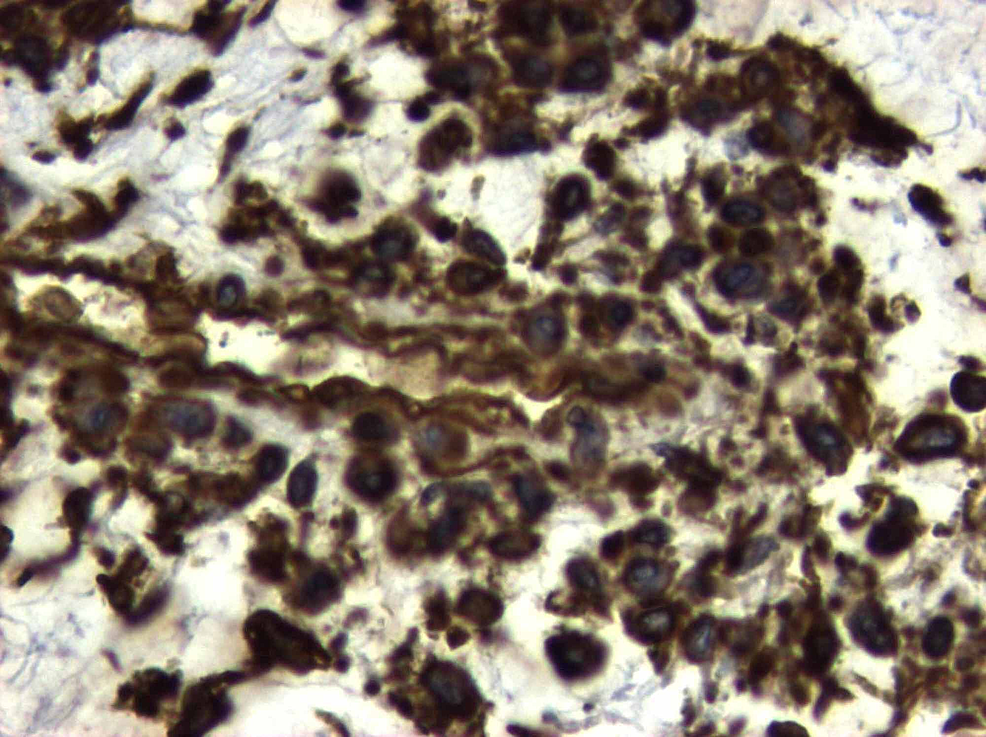 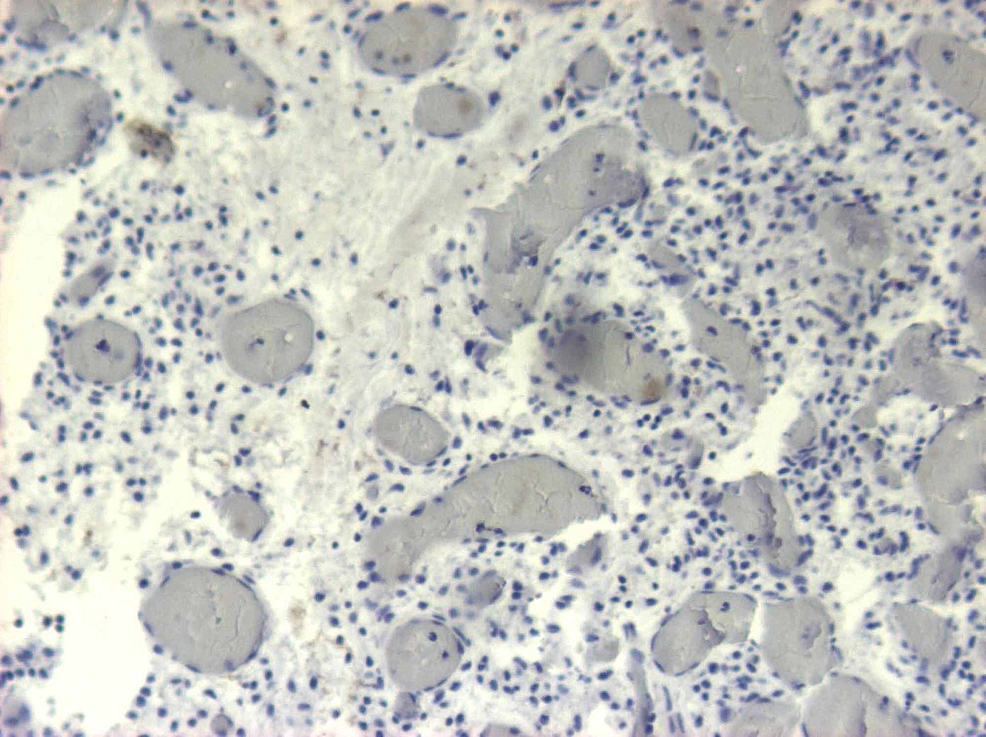 Immunohistochemistry study revealed the nonreactivity of hemangioblastoma for pancytokeratin 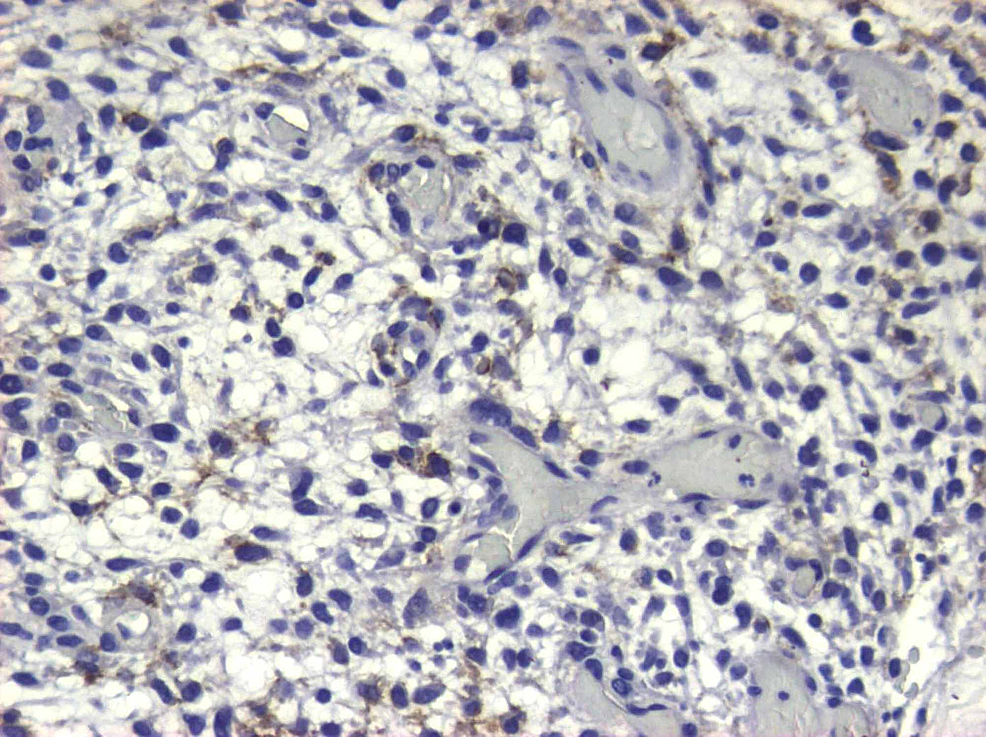 Postoperatively, the patient had considerable improvement in his visual acuity and temporal quadrant deficit. Except for transient diabetes insipidus, the rest of the postoperative course was uneventful, including any endocrine dysfunction.

After the histological diagnosis, initially, VHL syndrome was excluded via further imaging studies, including ophthalmic ultrasonography, abdominal, cervical, thoracic, and lumbar MRI. Although imaging studies were negative for other tumors and there was no known family history, genetic screening was suggested to the patient for von Hippel-Lindau gene mutations. No residual tumor was recognized in the brain MRI six months after surgery and the genetic test was negative for VHL mutations (Figure 16). 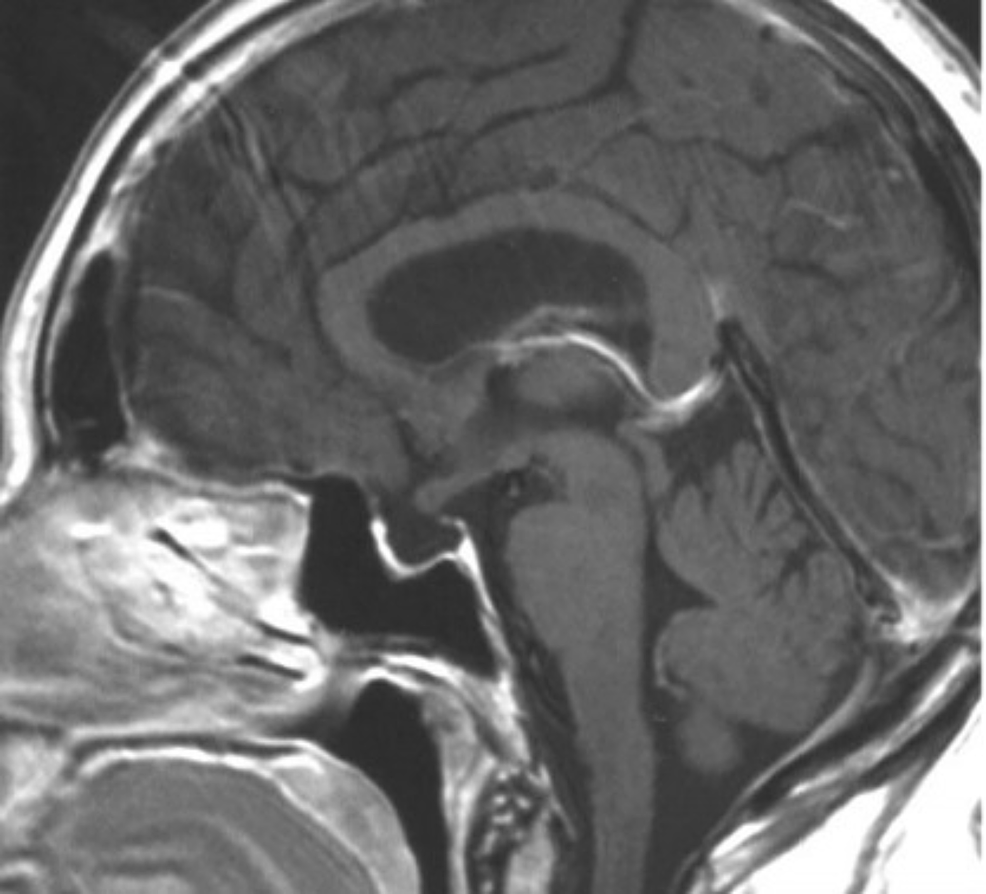 Hemangioblastomas are benign lesions that originate from the vascular system and have been reported in a variety of locations in the central nervous system. These tumors present as either isolated or multiple lesions. Isolated lesions occur in 80% of patients with VHL syndrome, and in 95% of patients without this disease. They are usually found in the cerebellum, but they have also been reported in the spinal cord, the brain stem, and, in rare cases, in the cerebrum. Typically, patients in the fourth and fifth decades are affected, but there are also reports of congenital lesions. There are only 132 previous reports in the literature of supratentorial hemangioblastomas [6]. Reports of intrasellar [7], suprasellar [8], and intraventricular locations [9] have been documented. Although histologically benign, occasionally, the tumor may spread along the subarachnoid space and especially after a surgical procedure, but no metastases have been testified. Histopathologically, they are characterized by two major components: vacuolated stromal cells and a capillary network. They do not have a true capsule, but the tumor margin is well-circumscribed and may be either cystic or solid.

Surgical resection (open or endoscopic) of these lesions is necessary when they become symptomatic, usually presenting with visual defects and endocrine dysfunction. Due to their high vascularity, open craniotomy is generally preferred in order to prevent uncontrolled bleeding and partial excision, but this approach results more often in pituitary stalk excision as compared to the transsphenoidal approach [7,9,16]. Total removal should be the main surgical goal, as these benign neoplasms tend to easily recur after partial excision. The role of radiotherapy is yet to be determined as an adjuvant treatment modality in cases of sporadic sellar/suprasellar hemangioblastomas [7,13].

Our study reports the ninth case of sporadic pituitary stalk hemangioblastoma, in which total resection was achieved by the transglabellar approach that is not so commonly used. Preoperative imaging should be thorough regarding highly vascularized lesions and angiography should be generally included in the preoperative setting, as it can be helpful not only as a diagnostic tool but also as a treatment modality with the embolization of large feeding vessels in cases of hemangioblastomas. Large multicenter studies are necessary to evaluate the role of radiotherapy as a primary or adjuvant treatment.

© Copyright 2020
Kasapas et al. This is an open access article distributed under the terms of the Creative Commons Attribution License CC-BY 4.0., which permits unrestricted use, distribution, and reproduction in any medium, provided the original author and source are credited.

Figure 5: Skin incision between the eyebrows crossing the nasion

Intraoperative image showcasing the suprasellar tumor (black asterisk), the left A1 being displaced by the tumor (black arrow) and the left optic nerve and optic chiasm (white arrow)

Immunohistochemistry study revealed the nonreactivity of hemangioblastoma for pancytokeratin