MA is a diverse clinical and pathological entity within the range of colorectal neoplasms and reports nearly 10-15 % of cases. Causes related to MA growth and progress have not been entirely known, but clinical observational evidence can guide us to the best understanding of its etiology [6]. To satisfy the definition of MA as highlighted by the World Health Organization, more than 50% of the tumor should comprise extracellular mucin [7]. Chronic inflammation presumably plays a significant role in carcinogenesis. Colorectal carcinomas (CRCs) occur primarily in areas affected by inflammation, but the mechanism of carcinogenesis is not yet totally understood [8-10]. As indicated by some studies, the peri-anal MA is linked to chronic anal fistula. Howbeit, that is not always the case; very limited research has been conducted to investigate the connection between peri-anal fistula and MA. Plenty of other studies will need to be performed to have a complete picture of this relationship.

We performed this study systematically using the Preferred Reporting Items for Systematic Reviews and Meta-Analyses (PRISMA) [11]. To search for the information, we used the various resources but mainly selected PubMed for gathering the majority of the data. Resources such as MEDLINE, WHO website, PubMed Central, WebMD, and Google Scholar were also searched. The keywords used for searching included chronic peri-anal fistula, anal carcinoma, MC, adenocarcinoma (AD), and peri-anal MA. We concentrated on the adult population from all over the globe without prejudice between gender, race, nationality, and ethnicity. Nevertheless, several publications demonstrating a correlation among various age groups have also been added. Among all relevant articles, a quality assessment checked was performed using A MeaSurement Tool to Assess Systematic Reviews (AMSTAR) checklist, and multiple publications were omitted [12]. All data was collected scientifically and ethically. 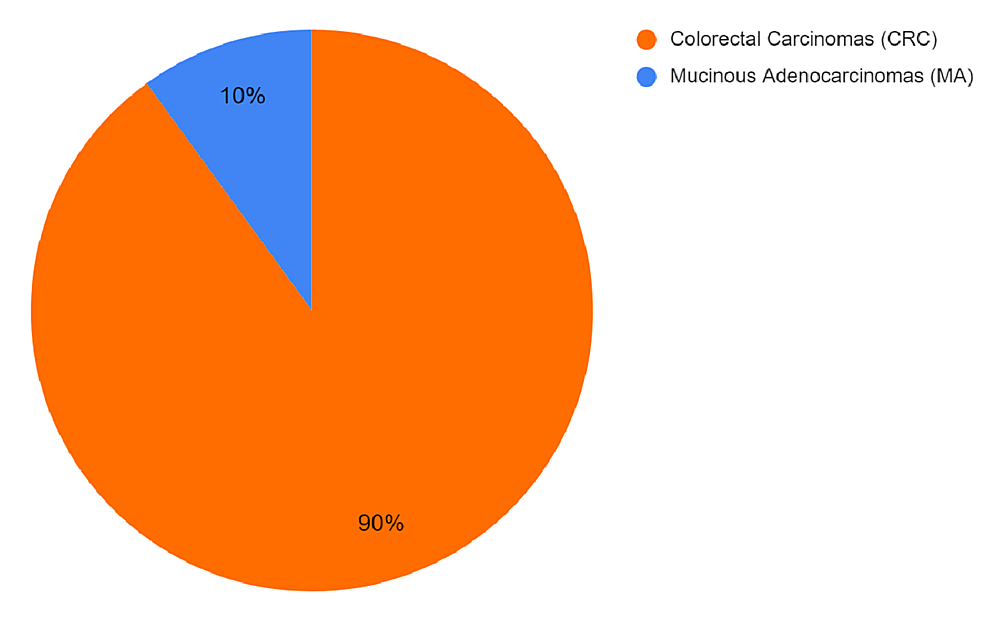 Figure 2: Ratio of mucinous adenocarcinoma relative to all colorectal cancers 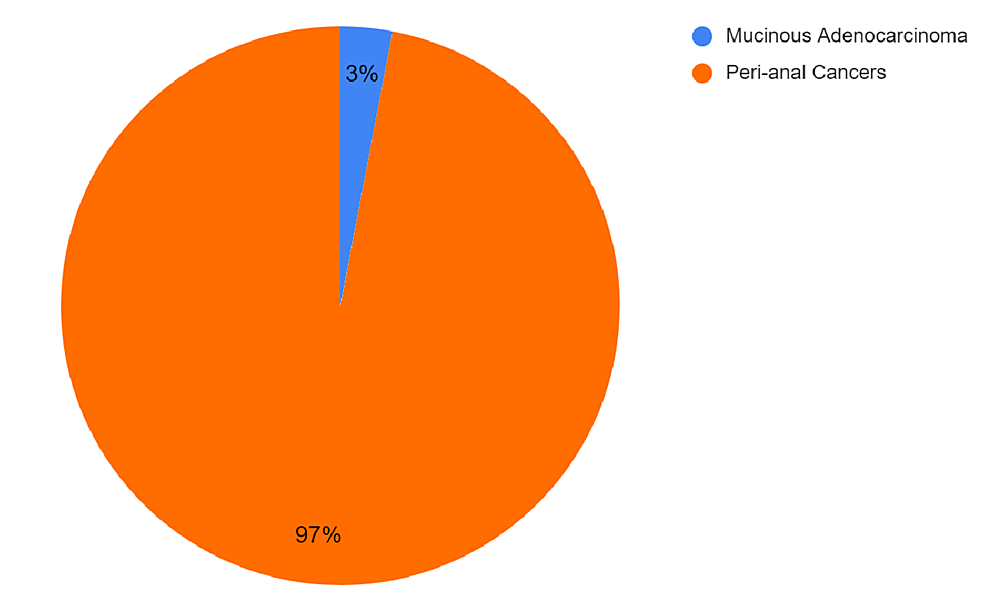 This sort of cancer comprises malignant cells that form an enormous quantity of extracellular mucin, and the histopathological identification needs to have more than 50% mucinous element of the tumor mass [7]. The prognostic findings of MA patients stayed questionable. Few investigators have put forward that patients with colorectal MA have a poorer prognosis than those with AD, though others have indicated no discrepancy [17-22].

The most common causes of MC are inflammatory bowel disease and Lynch syndrome, and a higher rate is seen in patients with radiotherapy-induced CRCs [6]. A handful of cases have indicated the origin of MA from chronic peri-anal fistula.

Further details revealed the different techniques to diagnose the MA, which includes endoanal ultrasonography (EAUS), which is the most efficient one and shows the specific attributes of MA arising from chronic peri-anal fistula. Sonography-guided biopsy under anesthesia is quite beneficial for the definitive diagnosis of the tumor. In this manner, regular evaluation with EAUS ought to be suggested for patients with long-standing peri-anal fistula, particularly those with dynamic clinical manifestations. Once the malignancy is suspected, vigorous sonography-guided biopsy under anesthesia should be carried out, which may empower the early findings, treatment, and favorable long-term benefits [23].

MCs of the colon and rectum grow and metastasize faster than non-MCs. It is believed that the pathological and clinical aspects resulted in decrease curability, consequent relapse, and an adverse prognosis. For that reason, surgeons recognized that more proactive surgical treatment, including a wide range of lymph node dissection and resection of adjacent organs that are probably involved, must be delivered from time to time to better the postoperative prognosis of the patients with colorectal MC [24].

The pathogenesis has not yet been entirely explained. Traube et al. described the theory of constant mucosal regeneration within the fistula, which can lead to dysplastic changes that may result in developing AD [25]. Symonds et al. suggested that the neoplasm categorized as MC is made up of glands secreting pools of mucus deep inside the infiltrating part of the tumor [26]. Pihl et al. stressed that MC should be limited to neoplasms in which mucin prevails [27]. Moreover, Wu et al. and Connelly et al. mentioned that a tumor in which the mucinous portion is at least 60% of the neoplasm should be considered as an MC [28,29]. The biologic importance of MC of the colon and rectum continued to be contentious [30,31]. Overall, the prognosis of the patients diagnosed with colorectal MC is worse [23]. 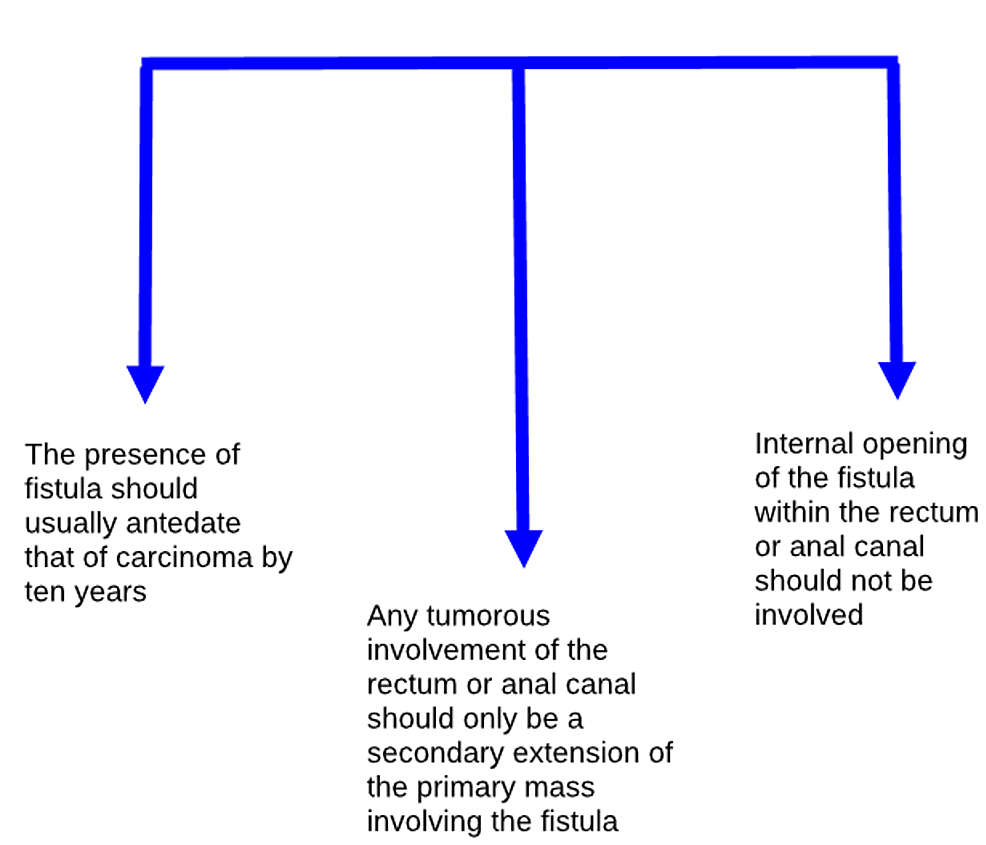 Toyonaga et al. showed the significance of EAUS of MA arising from chronic peri-anal fistula. The study demonstrated a typical pathology of MA with multiloculated complex echoic mass along isoechoic solid components communicating with a trans-sphincteric fistula, as shown by a sonography-guided biopsy under anesthesia [23]. Another study was conducted by Papaconstantinou et al. which reported the root of the MA within a chronic peri-anal fistula in Crohn’s disease. The study proved that the constant mucosal regeneration inside a fistula in Crohn’s disease tends to be a dominant pathogenetic mechanism. The mucosal biopsies collected from the lesions and the underlying fistulous tracts showed granulomatous tissue infiltrated by mucus-producing AD [33]. The study by Díaz-Vico et al. involved three patients and demonstrated that all three patients with chronic peri-anal fistula had developed MA over time. In the study, they emphasized that histopathological diagnosis remains the gold standard method of diagnosis. The presence of extracellular mucinous lakes encompassed by well-differentiated dilated tortuous glands, nerves, and vessels confirmed the diagnosis of MA [34]. One more study conducted by Bo-Lin Yang et al. based on retrospective case reviews identified three patients with chronic peri-anal fistula who were subsequently found to developed peri-anal MA on biopsy [35]. Table 1 summarizes all the aforementioned studies.

Table 1: An association of mucinous adenocarcinoma with chronic peri-anal fistula in relevant studies

Based on the studies reviewed, MA arising from long-standing peri-anal fistulas is uncommon. However, the occurrence of a long history of fistula-in-ano and the exclusion of another carcinoma in the body allows the diagnosis of MA emerging in a benign fistula. Also, the presence of fistula should usually antedate that of carcinoma by 10 years, and this is one of the pieces of evidence found in studies. On gross analysis, the tumor appears tan whitish to pinkish with cut-surface, might be germinal scar or necrosis, usually well-defined, and could be capsulated, smooth, cystic, or solid with even distribution with or without modularity. Furthermore, chronic mucosal regeneration plays a vital role in the pathogenesis of MA. The confirmatory diagnosis of mucinous AD includes the histopathological findings of the presence of extracellular mucin encircled by dilated tortuous glands.

The research has various limitations that could affect the accuracy of the results. Foremost, the number of people with the condition is very minimal, thus making it impossible to get enough data for analysis. Most of the investigation was based on a small sample size in their report. Another limitation could be that the research was conducted based only on the literature. Thus, the reliability of the information or data was dependent on already existing research studies. Another limitation is that the condition is very hard to diagnose until the symptoms usually manifest themselves during the last stages, and the duration of time to follow the results of an association between the two entities makes the researcher bore or quit from the study. Therefore, the delayed analysis could compromise the accuracy of the results.

MA arising from chronic peri-anal fistula is an uncommon occurrence. Still, it is visible that the two conditions have an association with each other, where the chronic disease causes the other, though not all the times. Understanding this relationship may be challenging, especially the diagnosis, as the signs manifest themselves at the later stages. The condition can be controlled if it is diagnosed early enough. A high level of clinical suspicion is required for early diagnosis, which builds the extension for therapeutic medical and surgical procedures. Imaging is very helpful in identifying the growing malignancy and staging the disease, thereby directing early and effective treatment. The histopathological assessment is prudent to neglect the chance of missing an underlying malignancy. Establishing the relationship between the two conditions will assist in decreasing the tumor burden for the hospital, patient, and government beforehand, and will also help focus on the patients to improve their living standards and handle and endure their chronic illness in comparison with the suffering of complications of malignancy, which will deteriorate their life physically, mentally, and monetarily.

I would like to thank Jawaria Rahman for her endless efforts and help she offered to me for this article. It was a pleasure working with her. She is an awesome team player and a very kind human being.

© Copyright 2020
Tahir et al. This is an open access article distributed under the terms of the Creative Commons Attribution License CC-BY 4.0., which permits unrestricted use, distribution, and reproduction in any medium, provided the original author and source are credited.

Figure 2: Ratio of mucinous adenocarcinoma relative to all colorectal cancers

Table 1: An association of mucinous adenocarcinoma with chronic peri-anal fistula in relevant studies