A 77-year-old female with a past medical history of myelodysplastic syndrome (MDS) with 20q deletion (international prognostication score 0 - low risk) with anemia and Crohn's disease presented with complaints of nine months of dyspnea on exertion. She was on darbepoetin alfa for MDS and balsalazide for the last three years for Crohn's disease. Her symptoms had worsened recently, interfering with activities of daily living in the last few months. She reported a remote history of smoking, no association of symptoms with weather, no use of illicit drugs, anoregixens, herbal substances, etc. No personal history of clots, cardiac disease, liver disease, or family history of connective tissue disorder was noted. Examination was largely remarkable for ambulatory desaturation to 80% and bilateral rales on auscultation. She was recommended to use baseline 2 L nasal cannula oxygen due to documented desaturation with ambulation, while workup was initiated. Extensive investigations were performed with anti-nuclear antibody (ANA), antineutrophil cytoplasmic antibody (ANCA), fungal serology (histoplasma, blastomycosis, coccidiodomycosis), rheumatoid factor, anti-cyclic citrullinated peptide, micopolyspora, thermoactinovulgaris, creatinine phosphokinase (CPK), alfa1 anti-trypsin, and polysomnography. Significant results included ANA 1:640, anti-centromere antibody at > 8.0 AI, and sleep apnea requiring continuous positive airway pressure (CPAP) at 12 cm of water overnight. She was referred to rheumatology and diagnosed with systemic sclerosis (SSc) in the presence of supportive findings of Raynaud’s phenomenon, calcinosis, and telangiectasia. Pulmonary function test (PFT) showed normal pre- and post-bronchodilator forced expiratory volume in one second (FEV1) and forced vital capacity (FVC) with a ratio of 74% and 69% respectively. Diffusion capacity was decreased at 44%, with increase to 58% of predicted after correlation with alveolar volume, reflecting mild obstructive ventilatory defect. High resolution computed tomography (HRCT) showed increased ground glass and interstitial opacities in the right middle and right lower lobes (RML, RLL) (Figures 1-2). 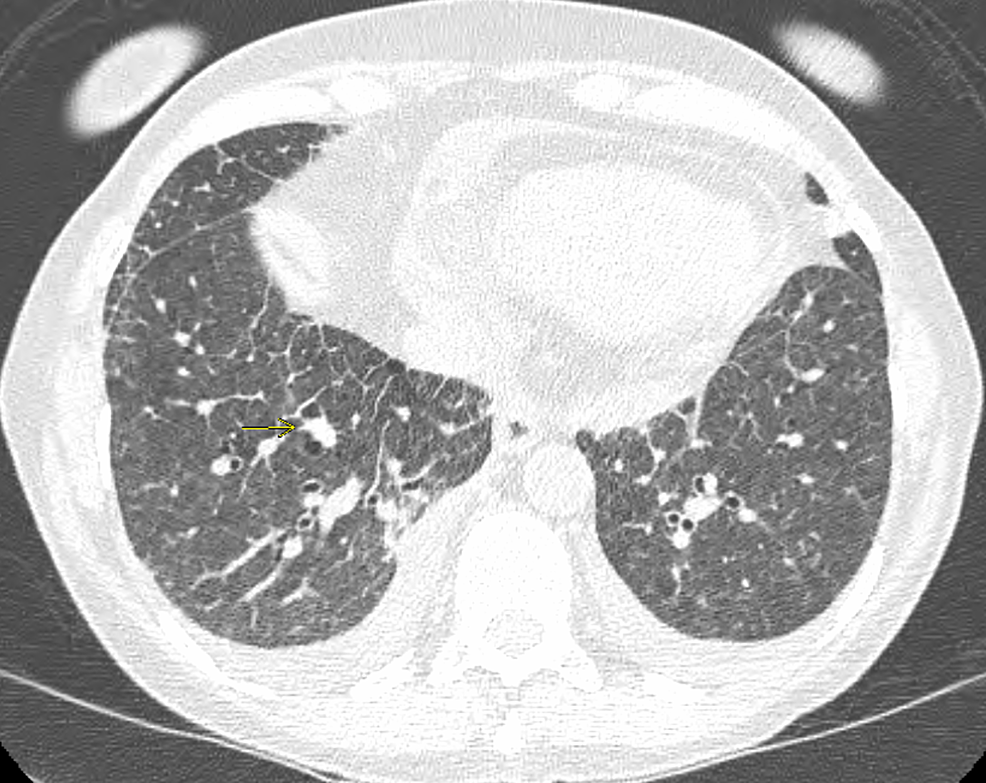 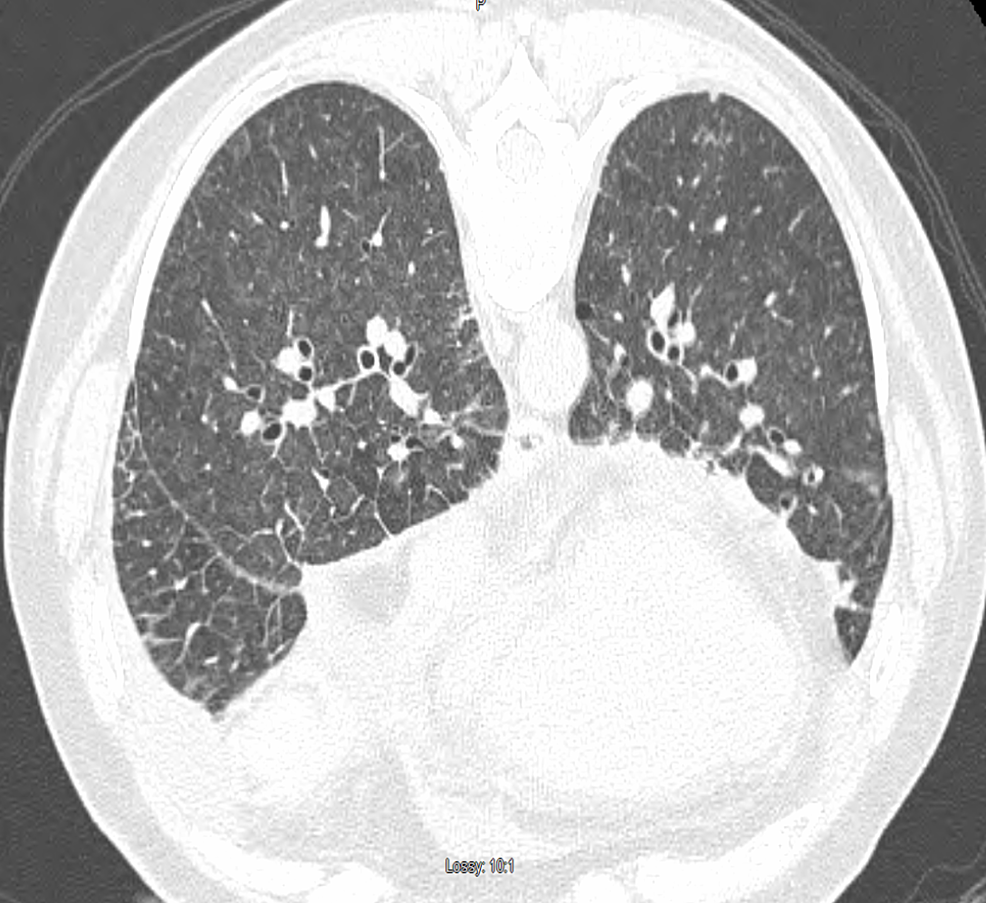 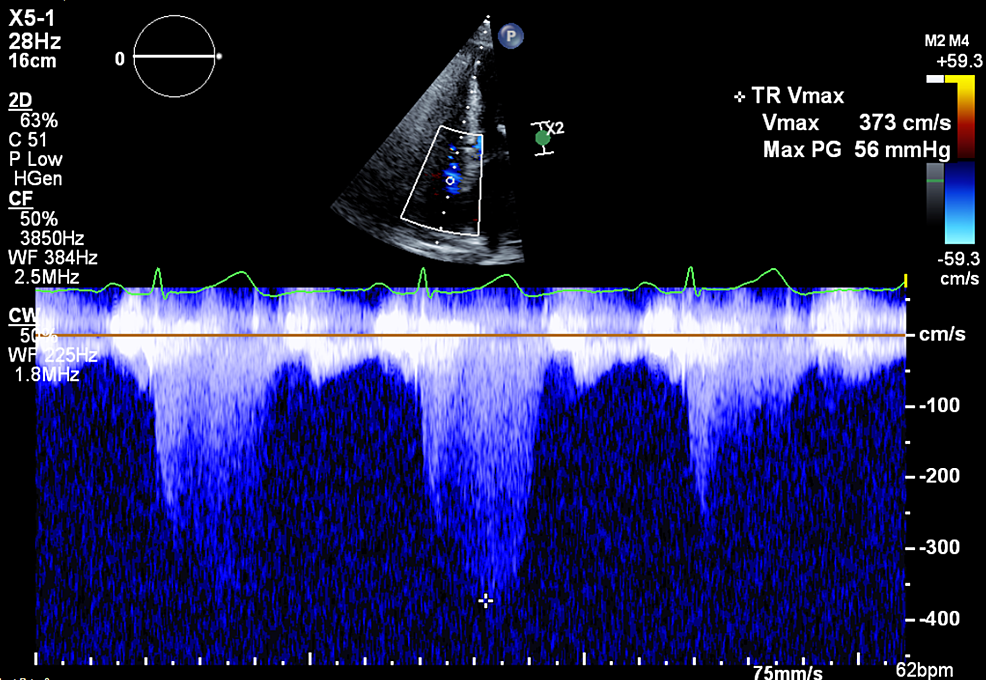 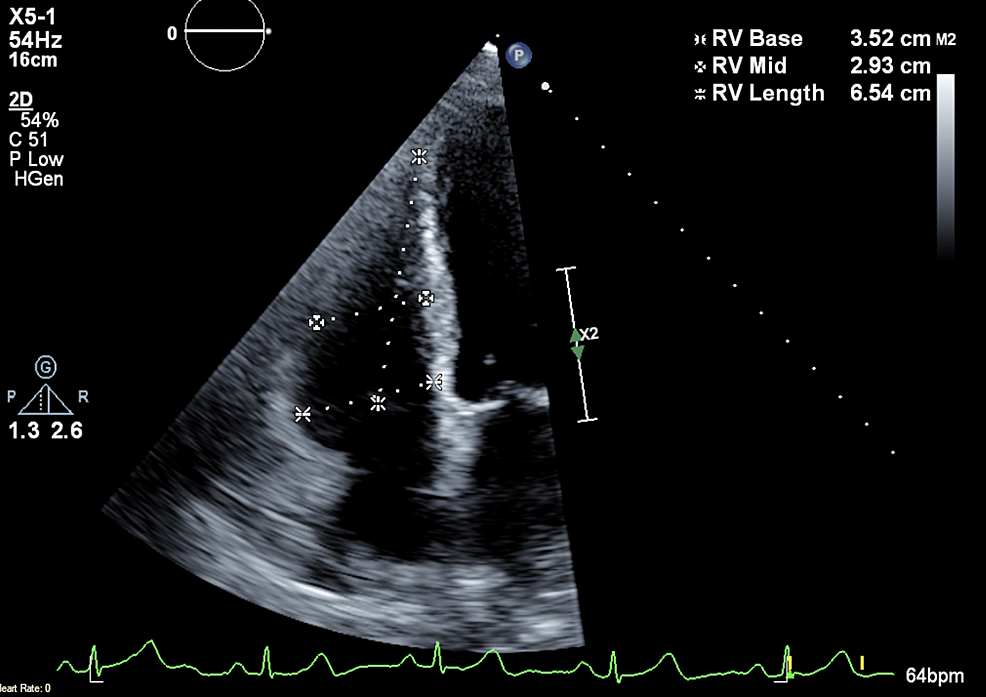 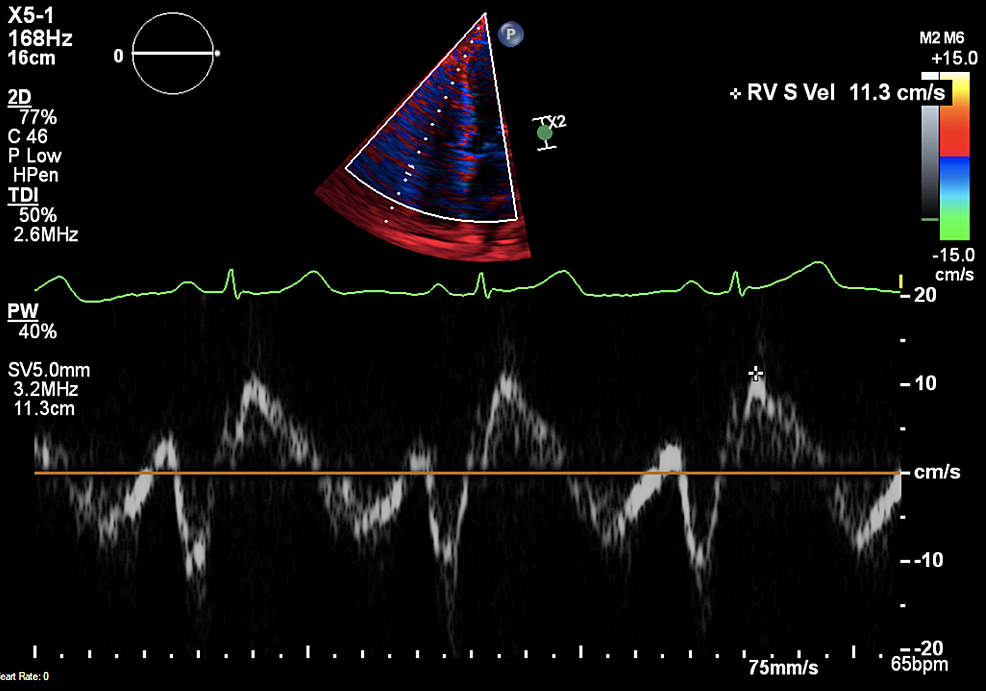 Due to further rapid decline in clinical status over the next two to three months, she required inpatient care with aggressive diuresis and empiric treatment for possible pneumonia. She continued to be significantly hypoxic with desaturations to 70% on room air raising concern for an acute flare of underlying ILD as a precipitating event. Repeat TTE showed pulmonary artery systolic pressure worsened to 87 mmHg with RV dilation which had increased from 59 mmHg within one year. Repeat CT chest remained consistent with diffuse septal thickening in the setting of chronic interstitial disease. With continued increment in oxygen requirement, PFTs and CT findings were out of proportion to the degree of pulmonary hypertension which warranted a RHC where her hemodynamics was significant for elevated PAP of 96/28 mmHg (mean 51), pulmonary capillary wedge pressure (PCWP) 11 mmHg, and peripheral vascular resistance (PVR) of 9.6 Woods Units. The nitric oxide vasoreactivity test was positive demonstrating a drop in her mean PAP from 51 to 35 mmHg with CO (cardiac output)/CI (cardiac index) 4.3/2.4 (pulmonary reactivity criteria: fall in mean PAP to <49 mmHg or drop of at least 10 mmHg, or maintenance/increase in cardiac output) [3] (Figures 6-10). 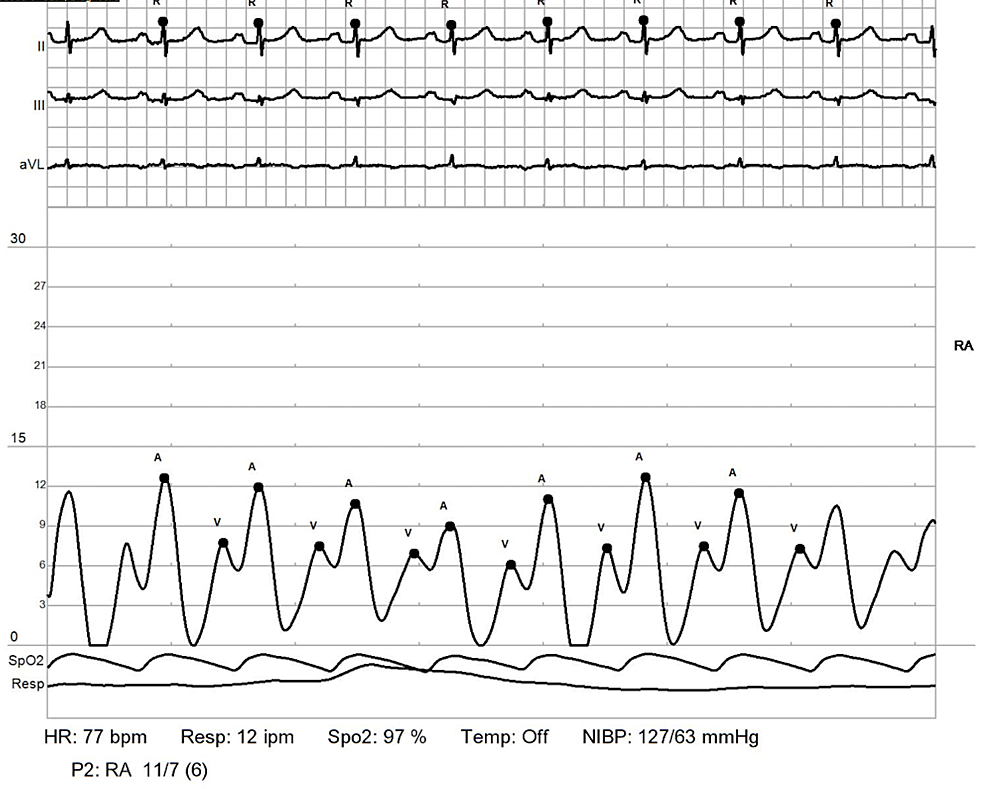 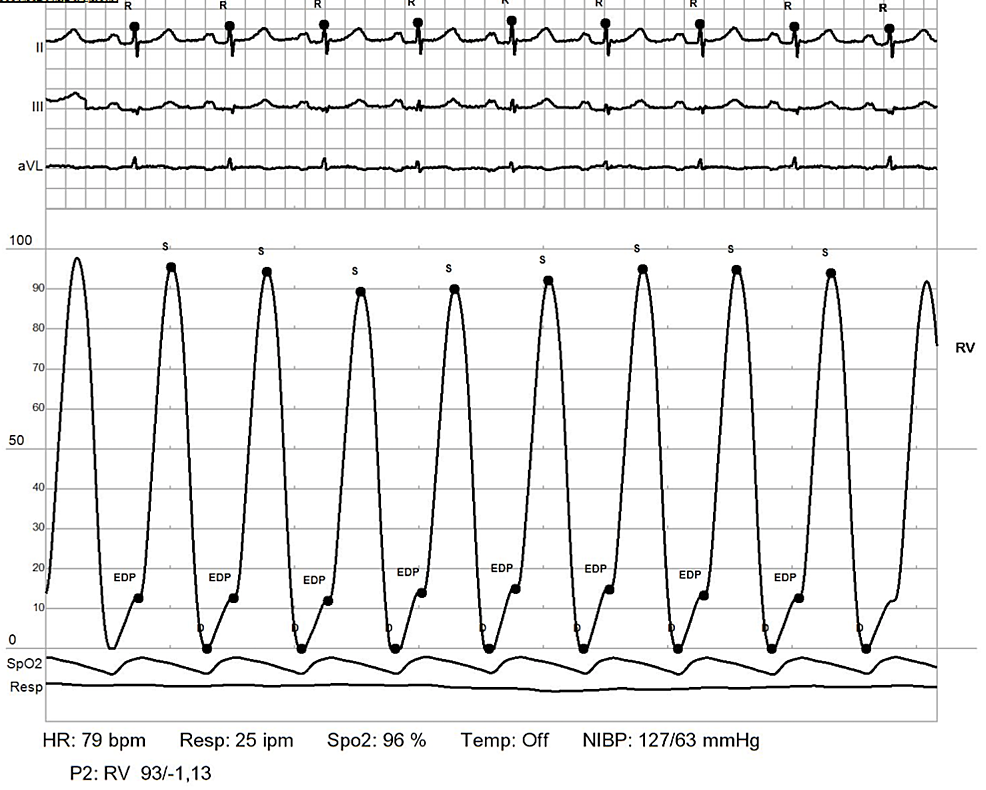 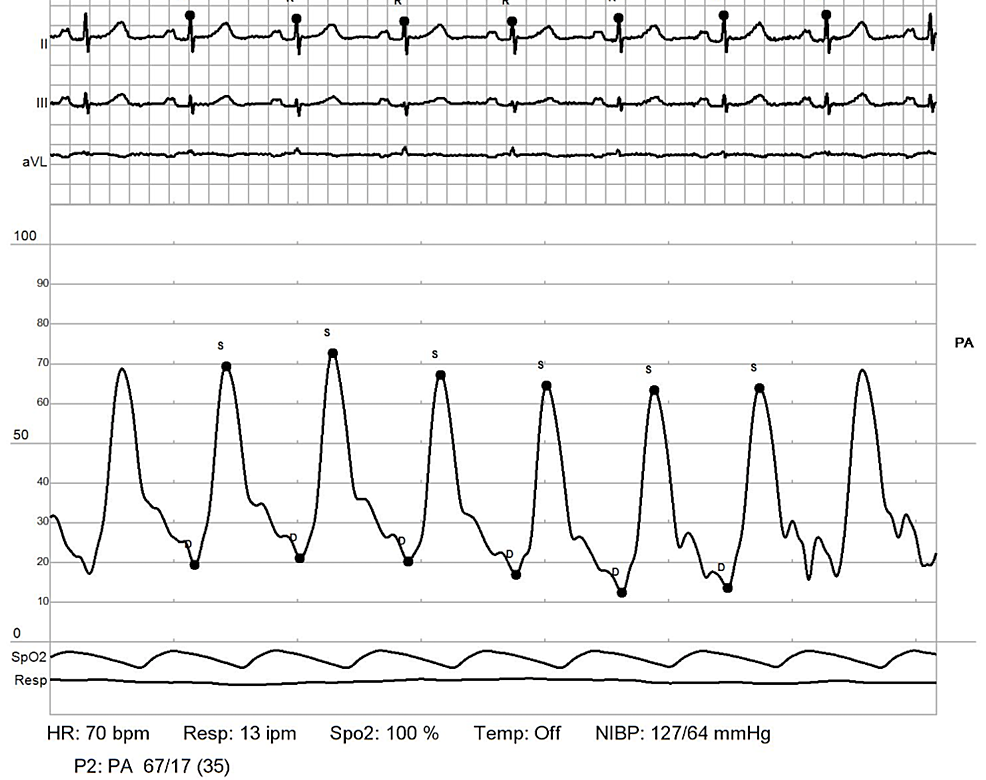 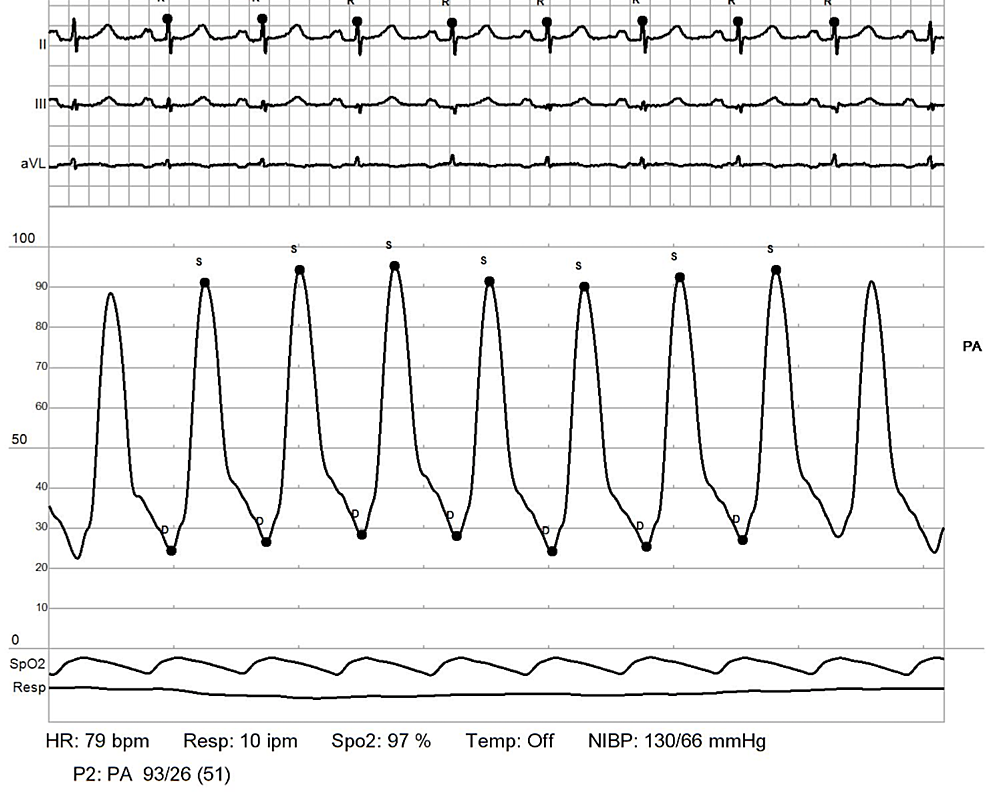 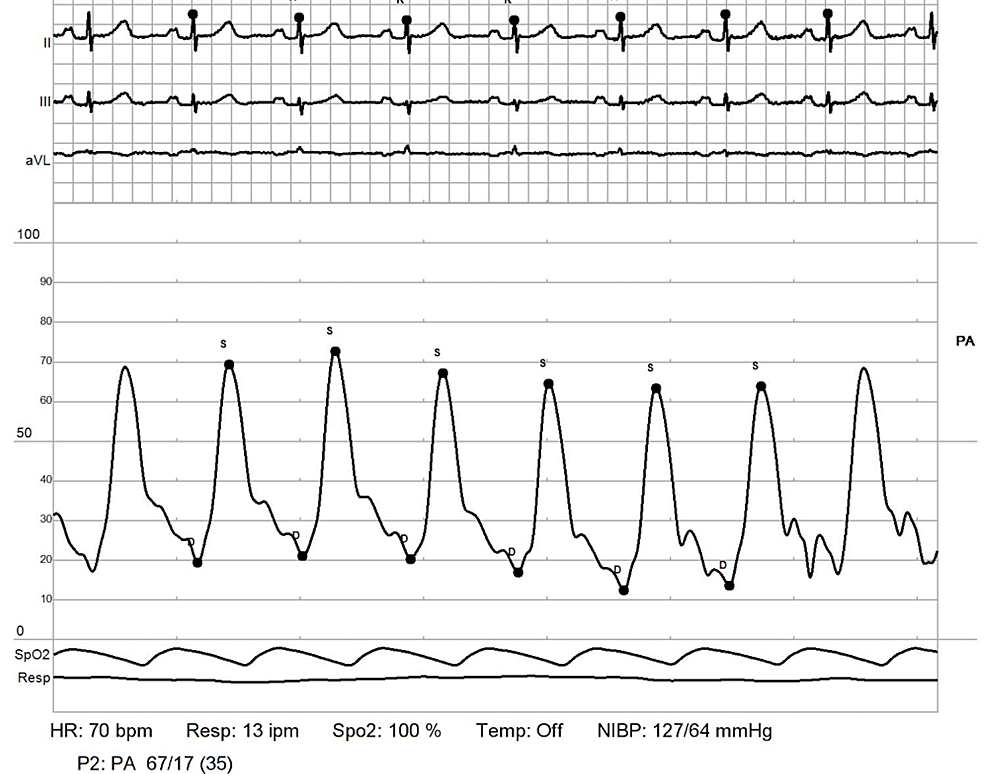 Therefore, she was started on nifedipine to be uptitrated clinically. Following a multi-speciality pulmonary hypertension conference with pulmonology, cardiology and rheumatology recommendations, she was started on triple therapy: prostacyclin receptor agonist - selexipag, endothelia receptor antagonist - macitentan, and tadalafil. She also continues to be on nifedipine, torasemide, steroids, and mycophenolate. She underwent a repeat RHC after six months interval with hemodynamics showing, PAP 72/24 mmHg, PCWP 18 mmHg, PVR 3.5 Woods Unit, findings consistent with mild improvement in PVR while she continues to be optimized on medical management as titration of above (Figures 11-14). 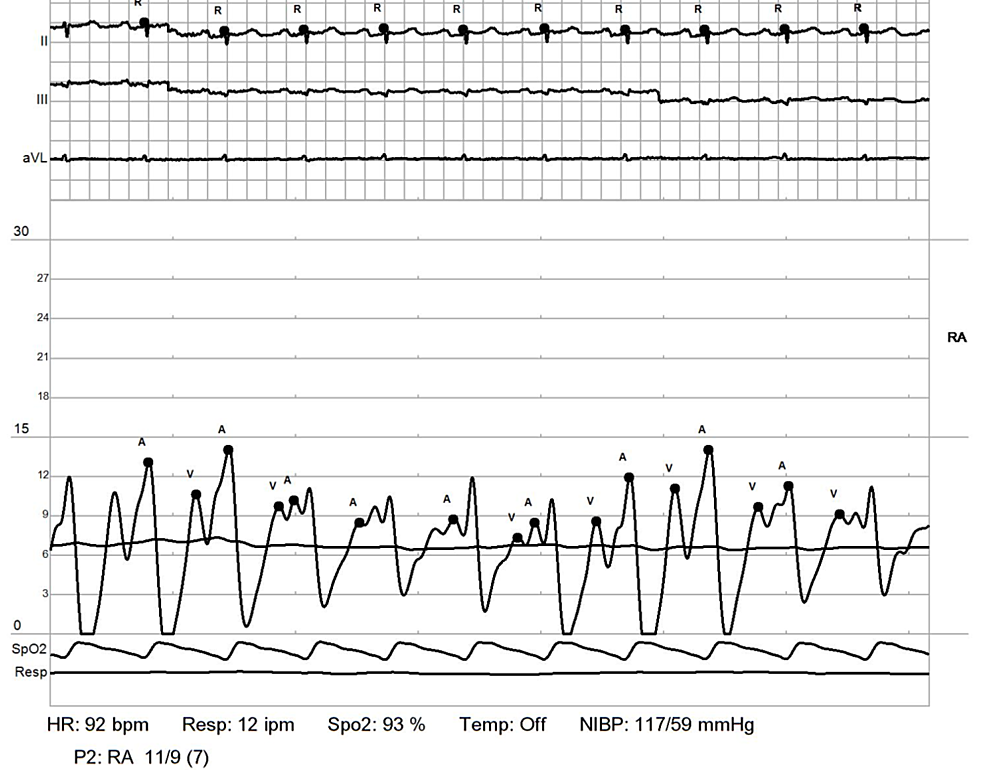 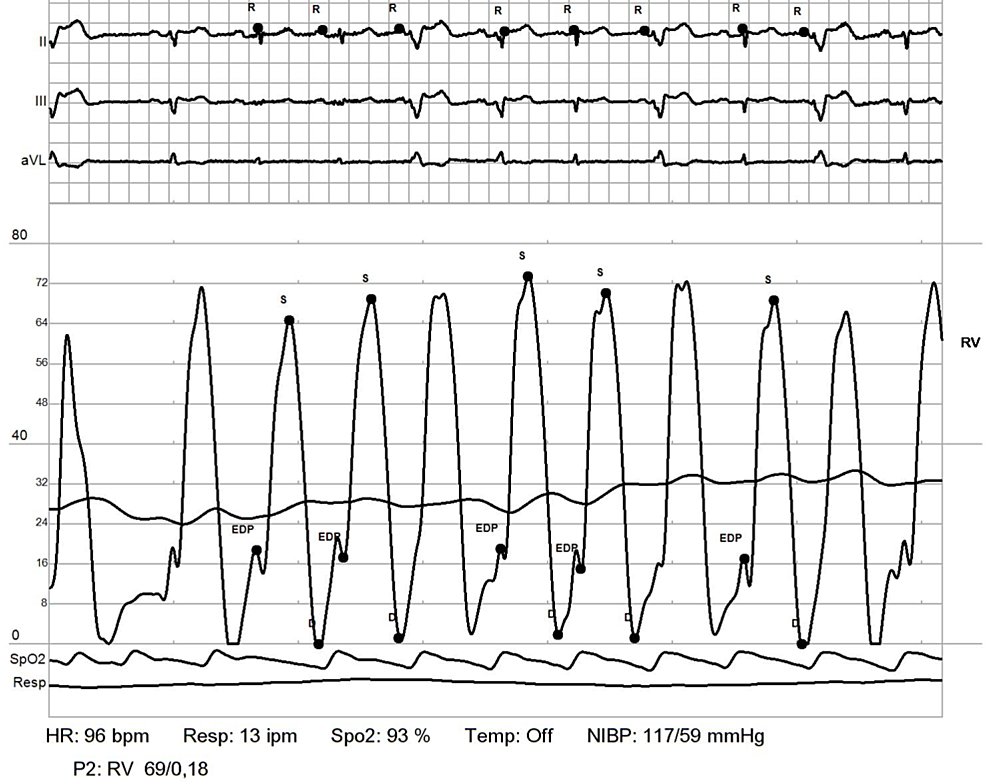 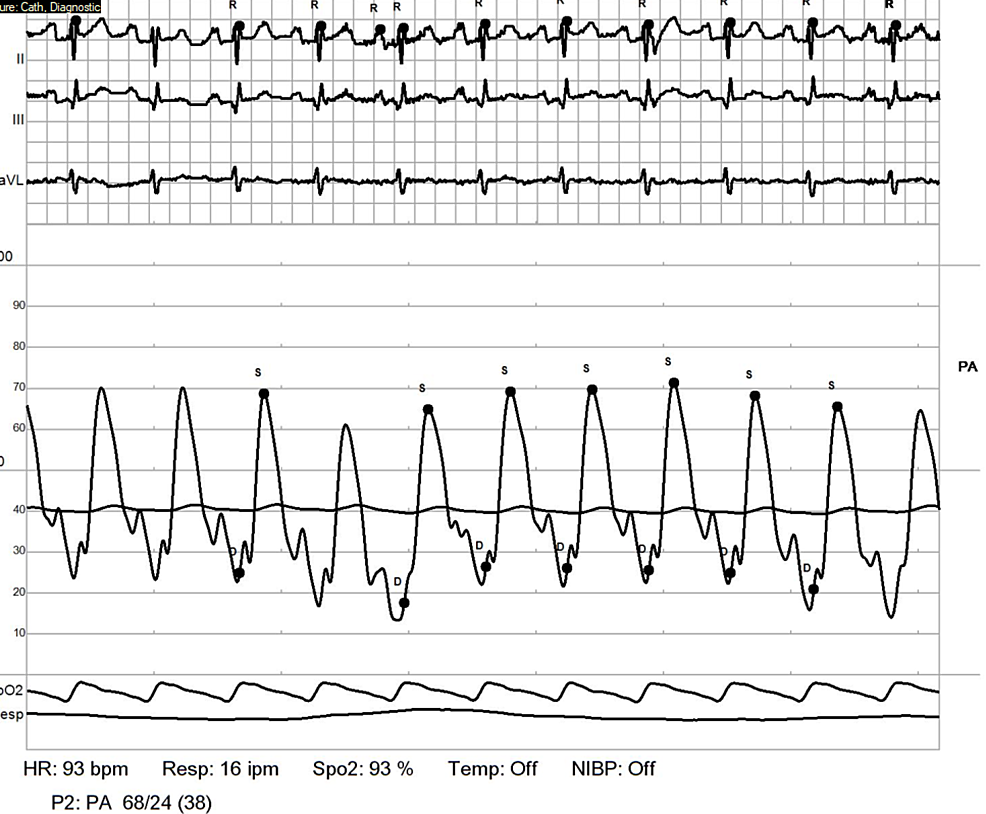 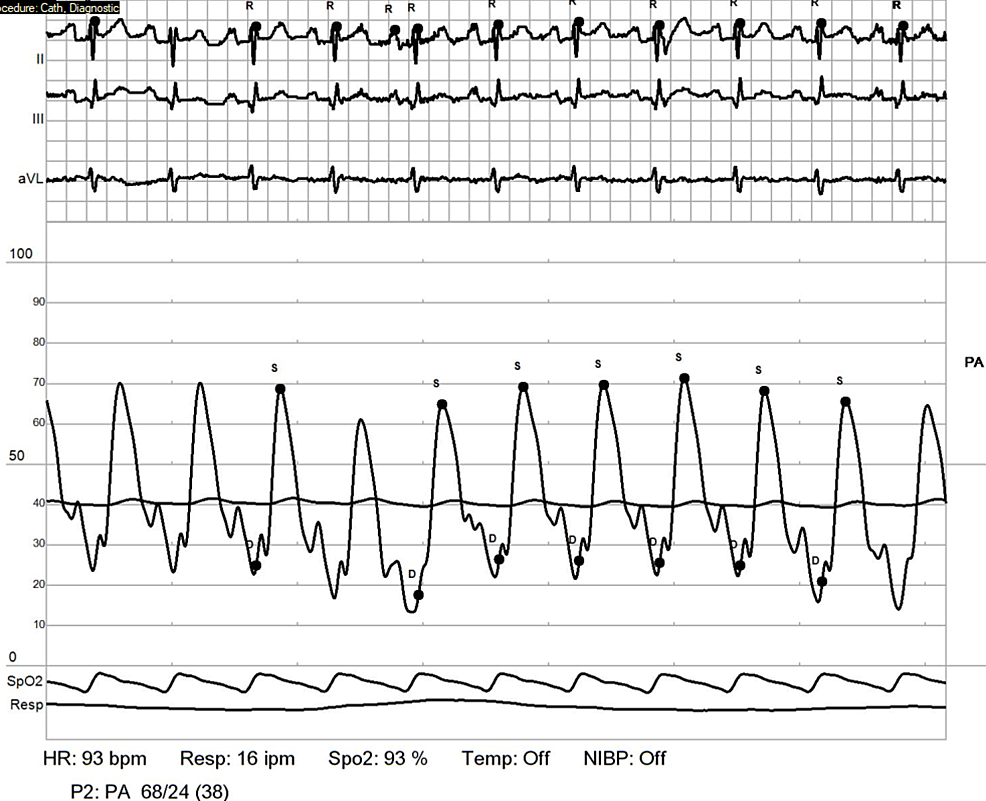 Pulmonary hypertension often presents as a multifactorial entity, although an underlying inciting event may be the primary factor unmasking multifactorial nature of pulmonary hypertension [1-3]. PAH may be idiopathic, heritable or associated with connective tissue disease, HIV, congenital heart disease, portal hypertension or drugs. Whereas, secondary pulmonary hypertension is post-capillary or venous in origin. This includes cardiac, pulmonary, thromboembolic and others such as hemolytic disorders, systemic conditions like sarcoid, pulmonary histiocytosis, lymphangioleiomyomatosis, metabolic disorders or chronic renal failure among others [3-5]. We present the case of a 77-year-old female with debilitating dyspnea in the setting of ILD, obstructive lung disease, heart failure with preserved ejection fraction, sleep apnea, chronic anemia secondary to MDS, and newly diagnosed SSc.

In addition to diagnosis, management of such a case remains a challenge, with concern for optimal focus towards likely all precipitating causes. The patient was started on oral therapy with calcium channel blockers for vasoreactive PAH, along with disease modifying drugs for SSc with mycophenolate, steroids, prostacyclin receptor agonist, endothelin receptor antagonist, diuretics, steroids, reinforcing compliance with CPAP for OSA, optimization of medications for heart failure, and continuing treatment for anemia and MDS. Such multifactorial cases with PAH, should also focus on management of co-morbidities with a multidisciplinary team approach to optimize management from every aspect of contributing factors [5-8].

The cause of rapid clinical decline in pulmonary hypertension may be its unidentified multifactorial nature. It is imperative to revisit possible etiologies in such a case with extensive and relevant investigations. Despite evident causes, due consideration should be given to undiagnosed autoimmune disorders playing a role in causing PAH. Management in such cases remains a multidisciplinary approach.