Intrapancreatic accessory splenic tissue constitutes a very unusual anatomical variation. It is encountered mostly in the splenic hilum or within the pancreatic tail. Given the diagnostic difficulty in excluding a pancreatic malignancy, a distal pancreatectomy is usually performed. We herein report two cases of intrapancreatic accessory spleen. The first patient presented with left upper quadrant abdominal pain radiating to the back, caused by a 2-cm focal lesion in the pancreatic tail. The second patient underwent a distal pancreatectomy due to a postsplenectomy symptomatic pseudocyst that could not be treated conservatively. In both cases, the histopathological examination of the specimens revealed a 2-cm accessory spleen within the pancreatic tail. Intra and peripancreatic spleens represent 10-16% of all accessory spleens, and their sizes range from a few millimeters up to 2-3 cm. CT, MRI, and nuclear scintigraphy are all useful in establishing the diagnosis. It is occasionally difficult to differentiate accessory spleens from hypervascular pancreatic neoplasms, metastatic lesions, or splenic hilar lymphadenopathy. The surgical resection of an intrapancreatic spleen is only indicated in the case of diagnostic uncertainty or spleen-related hemato-oncological conditions such as immune thrombocytopenia (ITP).

Distal pancreatic tumors are characterized by their non-specific clinical presentation and late diagnosis. Surgical removal is indicated in malignant cases or in selected lesions such as hormonally active neuroendocrine tumors. Curative resections can be achieved only in 10% of malignant cases [1] since most prove to be metastatic or locally advanced by the time of detection.

A 54-year-old Caucasian male presented with left upper quadrant abdominal pain radiating to the back. He had no significant past medical history and laboratory tests including serum amylase, lipase, carcinoembryonic antigen (CEA), and carbohydrate antigen 19-9 (CA 19-9) were within normal range. Abdominal sonography revealed a 2-cm focal lesion in the pancreatic tail. MRI confirmed the findings (Figure 1). 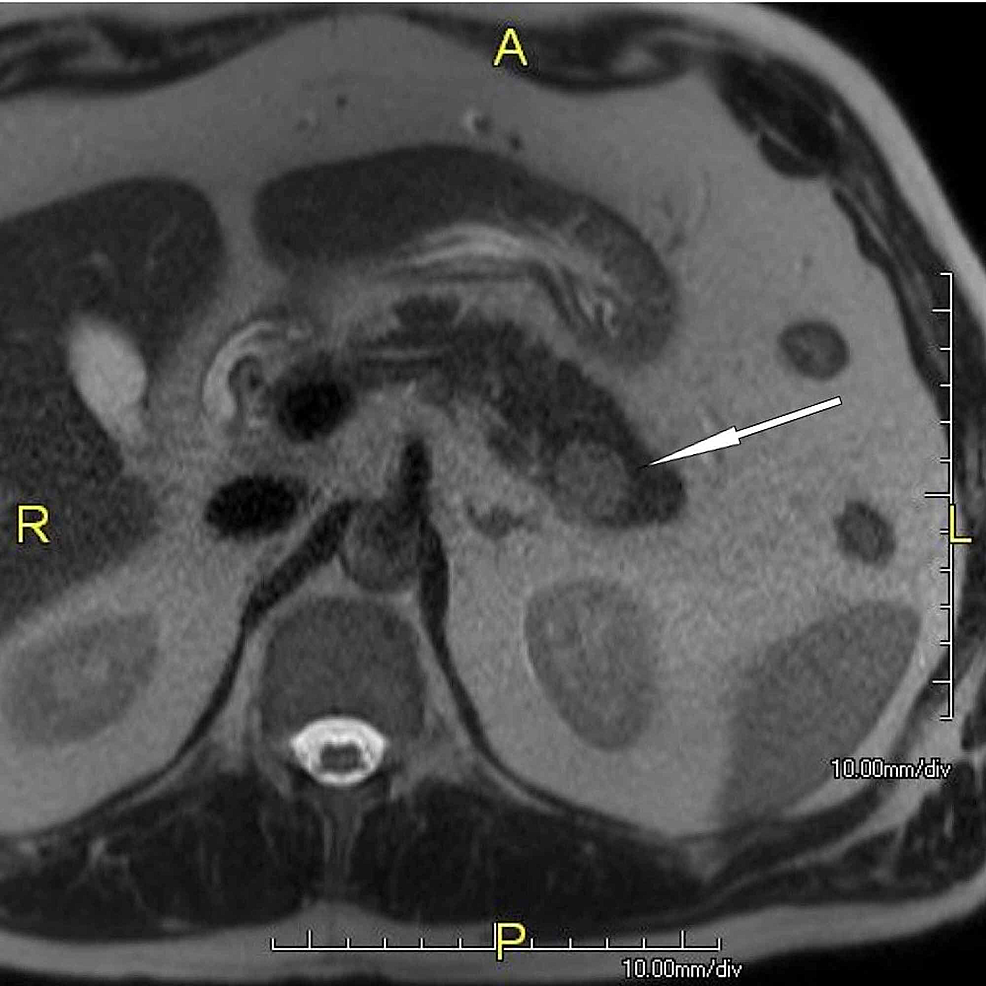 Figure 1: MRI of the 2-cm tumor in the pancreatic tail (intrapancreatic spleen)

There was no evidence of extrapancreatic spread. CT-guided fine-needle aspiration (FNA) was negative for malignancy. A spleen-preserving open distal pancreatectomy was undertaken. Histopathological examination of the specimen showed a 2-cm accessory spleen within the pancreatic tail. The postoperative course was complicated by a pancreatic fistula that resolved with percutaneous drainage. The patient was discharged three weeks after the operation.

A 53-year-old Caucasian male with a traumatic rupture of the spleen underwent an emergency splenectomy complicated by a 7 x 6-cm pancreatic pseudocyst (identified by ultrasonographic and CT imaging, Figure 2). 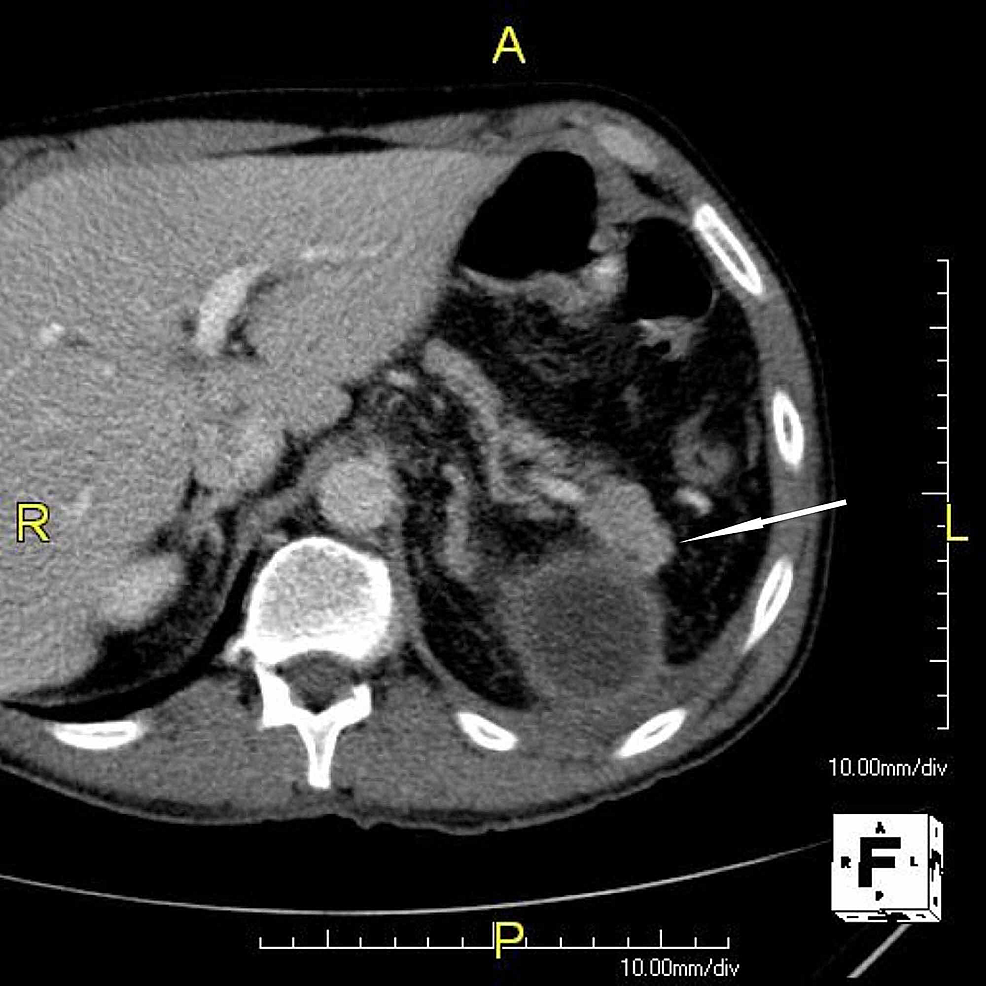 The main finding of the postsplenectomy pancreatic pseudocyst. The presence of an intrapancreatic accessory spleen (arrow) can be speculated in the tail of the pancreas

CEA and CA 19-9 were within normal laboratory ranges. After an unsuccessful endoscopic trans-gastric drainage and subsequent abscess formation in the pancreatic tail, the patient was treated with a distal pancreatectomy. Histopathological examination of the specimen showed a 2-cm auxiliary spleen within the pancreatic tail (Figures 3, 4). The postoperative course was uneventful and the patient was discharged one week after the operation. 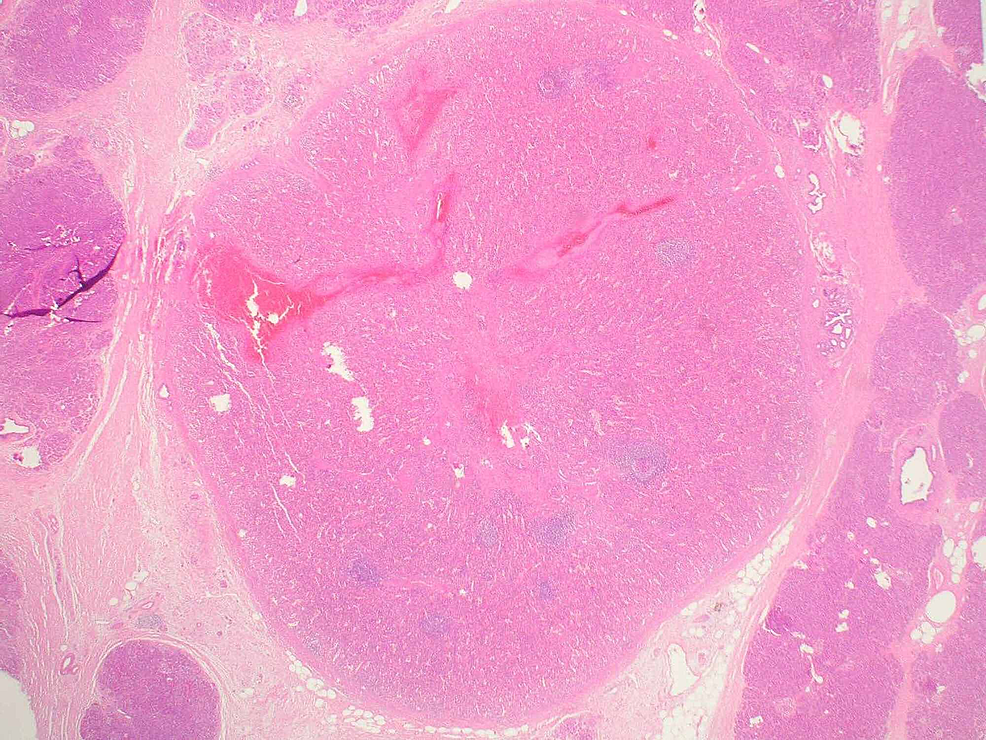 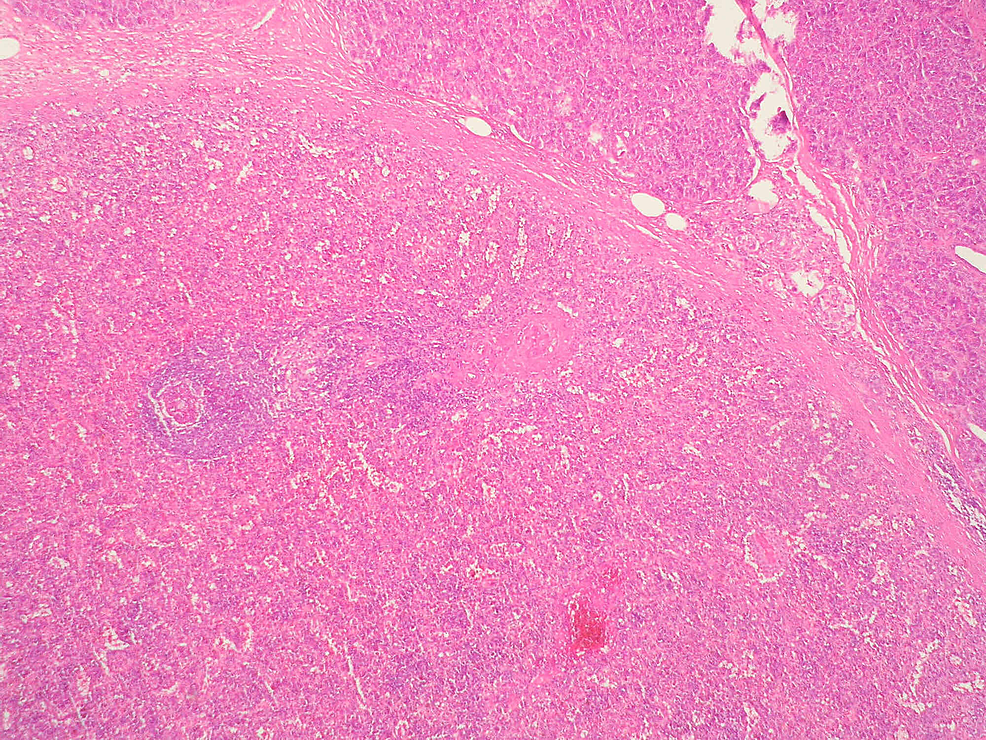 Accessory spleens are small nodules of ectopic splenic tissue. They likely represent remnants of tissue along the embryologic splenic migratory pathway from the midline to its final location of the left side of the abdomen at the level of the 9th-11th ribs. In contrast, the entity of splenosis represents the presence of heterotopic foci of splenic tissue, occurring through autotransplantation after splenic trauma or surgery. Autopsy studies report a 10% incidence of accessory spleens in the general population [4]. Although 80% of accessory spleens are located within the splenic hilum or adjacent to the tail of the pancreas, they may also be found anywhere along the splenic vessels, in the gastrosplenic ligament, the splenorenal ligament, the walls of the stomach or intestines, the pancreatic tail, the greater omentum, the mesentery, or the gonads and their path of descent. Intra and peripancreatic spleens represent only 10-16% of all accessory spleens. Their typical dimension is approximately 1 cm in diameter, but sizes ranging from a few millimeters up to 2-3 cm are not uncommon [3,4].

Intrapancreatic accessory spleens usually represent an incidental finding, but obtaining an accurate diagnosis is often challenging. More specifically, differentiating them from hypervascular pancreatic neoplasms (primary or metastatic), complicated cystic formations, or splenic hilar lymphadenopathy might be quite difficult. A routine laboratory test in most cases do not reveal any biochemical abnormalities. Tumor markers such as CEA and CA 19-9 are usually within normal ranges. Biochemical tests for the identification of possible neuroendocrine or genetic markers are very expensive, while their results usually fall within normal ranges.

Abdominal ultrasonography depicts intrapancreatic accessory spleens as well-defined masses with a lower echogenicity than that of the surrounding pancreas. The Doppler effect may reveal direct blood flow from/to the splenic vessels to/from the intrapancreatic accessory spleen [5]. According to Ota et.al., its diagnostic capacity may be further increased by using contrast agent enhancement [6]. Although cost-effective, ultrasonography is operator-dependent and lacks sensitivity, especially in obese patients, in whom the pancreatic tail is hard to visualize.

Although the surgical resection of an intrapancreatic spleen is generally not indicated, the diagnostic difficulty in excluding a pancreatic malignancy often leads to a distal pancreatectomy. Additional reasons for surgical intervention include complications or spleen-related hemato-oncological conditions such as immune thrombocytopenia (ITP). In cases of surgical indication, possible modalities include open, laparoscopic, or even robotic approach. The choice of the most suitable modality depends on the patient’s characteristics, the location and size of the lesion, and prior experience of the surgical team. Furthermore, the decision whether to perform a simultaneous splenectomy (if prior not performed) or not is taken based on lesion's relationship to main splenic vessels and the suspicion index for malignancy.

Intrapancreatic accessory spleens are uncommon entities, and their surgical resection is usually not indicated except in symptomatic cases and cases requiring splenectomy for hemato-oncological indications or ITP. Distal pancreatectomy with or without splenectomy may be complicated by subphrenic abscess formation and pancreatic duct leak (incidence of up to 10% and 20%, respectively). The presence of an intrapancreatic accessory spleen should be part of the differential diagnosis of pancreatic lesions in order to avoid unnecessary surgical interventions.

© Copyright 2020
Kykalos et al. This is an open access article distributed under the terms of the Creative Commons Attribution License CC-BY 4.0., which permits unrestricted use, distribution, and reproduction in any medium, provided the original author and source are credited.

Figure 1: MRI of the 2-cm tumor in the pancreatic tail (intrapancreatic spleen)

The main finding of the postsplenectomy pancreatic pseudocyst. The presence of an intrapancreatic accessory spleen (arrow) can be speculated in the tail of the pancreas