AIDS is diagnosed when there is a demonstration of HIV infection, the number of CD4 cells falls below 200 mm-3, or when patients develop one or more opportunistic infections and specific cancers, that is, the two major AIDS-defining cancers being Kaposi sarcoma and non-Hodgkin lymphoma, regardless of their T cell CD4 counts. Without treatment, life expectancy is approximately three years. However, with certain opportunistic infections, survival may be less than one year. The incidence of anal canal cancer (AC) is increased in HIV-positive individuals. The relative risk of AC in people with AIDS is 31.7 (95% CI 11.6 to 69.2). Although not an AIDS-defining diagnosis, the frequent occurrence of AC in HIV-positive patients warrants specific consideration [1-3].

Survival beyond two years, without colostomy, is possible with standard high dose (at least 45-Gy) CMT for patients who have stage T1 or T2 cancer, with good performance status and without AIDS. However, high viral load and low CD4 count have long been considered relative contraindications of combined modality treatment (CMT) for AC due to severe toxicities, despite the fact that good results have been consistently reported to use CMT for HIV-negative AC patients [4]. For patients with evidence of progressive HIV disease or low CD4 counts, palliative low-dose external beam radiation treatment (EBRT) (such as 30-Gy in 10 fractions) is often required in some institutions to control pain, bleeding, and infection while reducing toxicity, but others found no such need to reduce the EBRT or chemotherapy dose in HIV-positive AC patients without AIDS [4-10]. The numbers of patients in these reports are very small. It is almost impossible to conduct phase III randomized controlled trials (RCT) to test whether potentially curative treatment without severe toxicities is possible in these rare subgroups of AC patients. 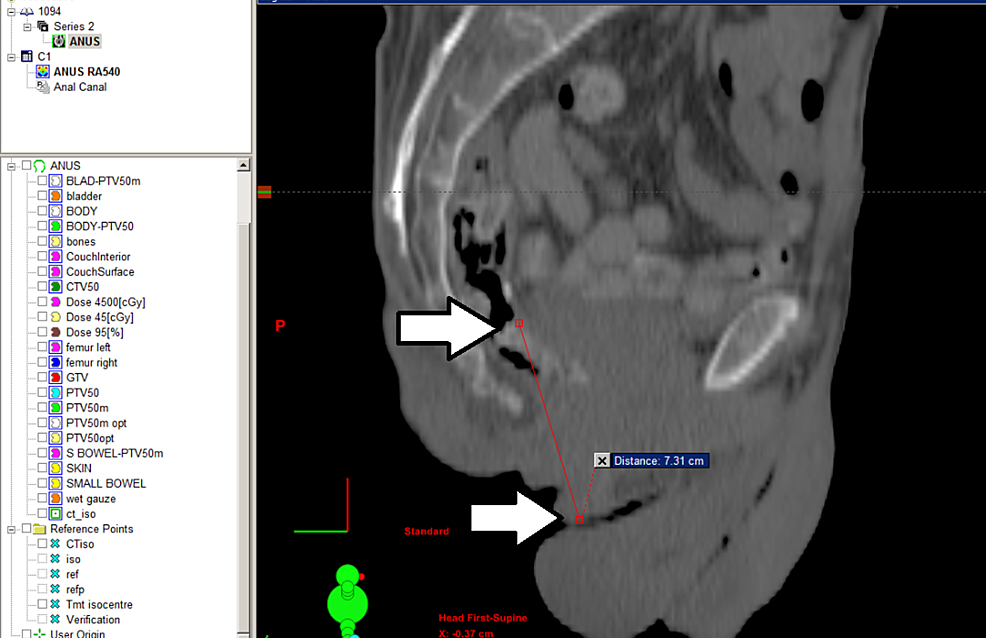 He had been diagnosed with AIDS after being tested HIV-positive in 1986. He had a long history of noncompliance with highly active antiretroviral therapy (HAART) and had a very high viral load, over one million, and baseline CD4 cell count around 100 mm-3 for the immediate two years before presentation (range 105-128 mm-3). He had multiple infections with abscess treated with local excision, drainage, and antibiotics. He also had multiple recurrent condyloma removed from the peri-anal area.

His case was discussed in our tumor board rounds. His HIV status and low CD4 count were considered relative contraindications for high-dose CMT. Previous publication from 1999 reported poor results of CMT for HIV-positive AC if CD4 is less than 200 mm-3. Most of the patients required either hospitalization or colostomy [4]. He clearly stated that he would rather die from the cancer if he would require a colostomy.

He was not considered a good candidate for standard CMT. Eventually, he received EBRT alone to the primary cancer, 50-Gy in 25 fractions over five weeks, with the last dose on April 11, 2014. He did not have any treatment for the inguinal or pelvic lymph nodes in an effort to avoid severe toxicities. We used Eclipse treatment planning system to plan Rapid Arc VMAT (Figure 2). 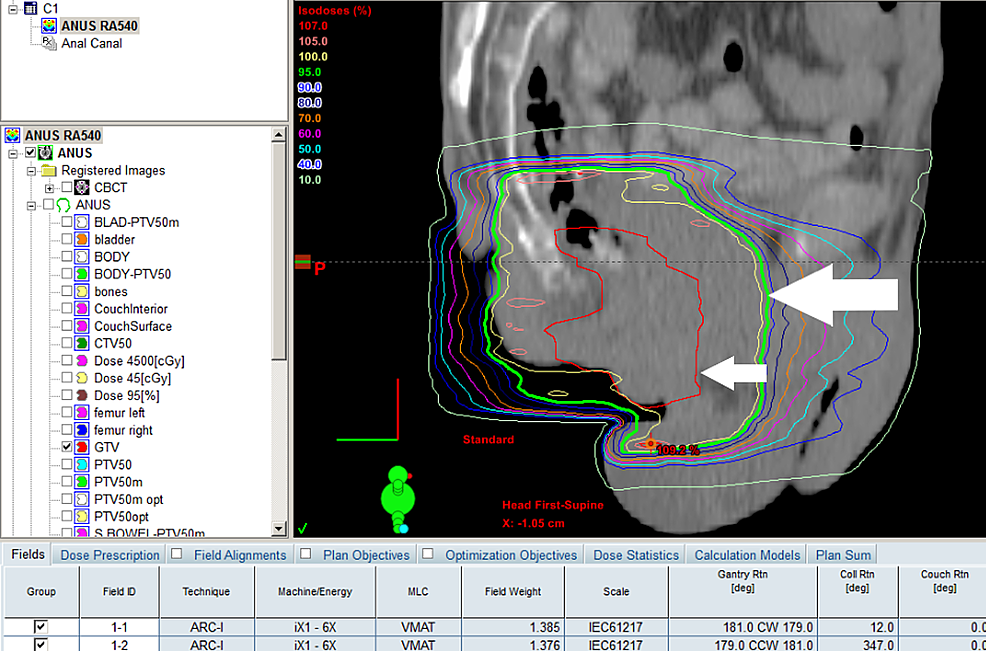 He had a CT simulation with bowel contrast, empty rectum and Vac-Loc immobilization as in our standard protocol. The gross tumor volume (GTV) was 62.5-ml, clinical target volume (CTV) was GTV plus 1-cm expansion to account for microscopic disease, and planning target volume (PTV) was CTV plus 1-cm expansion to account for tumor movement, patient movement, daily setup error, etc. We used 1-cm bolus on peri-anal skin. The organs-at-risk (OAR) included the small bowels, bladder, and femoral head. All normal tissue tolerance dose constraints were met on the dose volume histogram (DVH) (Figure 3).

He had image-guided radiation therapy (IGRT) with daily cone-beam CT (CBCT) guidance. CBCT was matched to pelvic bone with manual assessment of CTV and PTV (Figure 4). The treatment unit was Varian Clinac iX Linear Accelerator. We used 6MV photons and 540-degree arcs. Average machine time was only six minutes, from the time of CBCT to the completion of VMAT delivery, in contrast to 15 minutes in our standard multiple field intensity-modulated radiation therapy (IMRT). This helped with patient comfort and encouraged compliance. 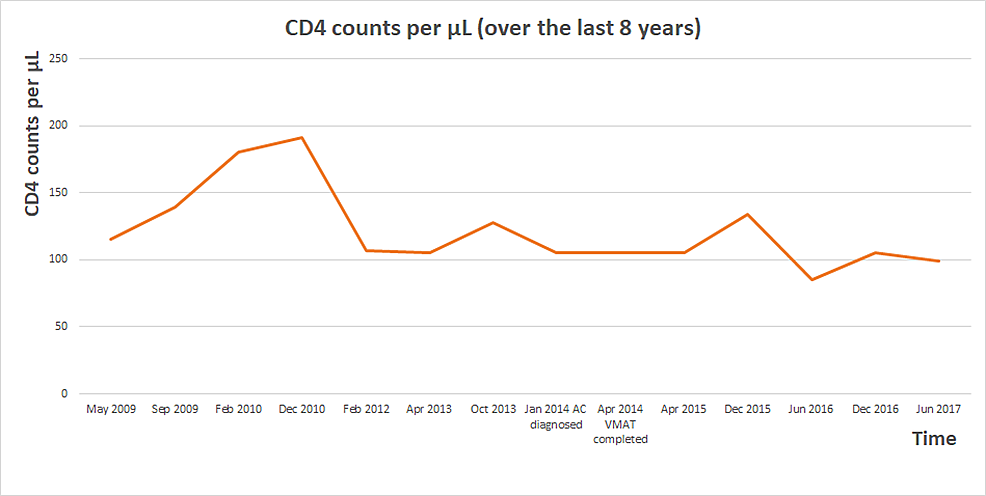 On the last follow-up, he continued to have occasional fecal incontinence, but he was managing it well. He did not notice any change in his bowel habits, rectal bleeding or pain. There was no recurrent disease on digital rectal exam (DRE). His last CT scan did not show any recurrent cancer, enlarged lymphadenopathy or distant metastases (Figure 6). His AC was considered having been cured, so he was discharged from the cancer clinic but continued to be followed by palliative care physicians for his dementia. His last colonoscopy only showed mild radiation proctitis without any cancer or bleeding at 42 months after VMAT.

Figure 6: Last follow-up CT scan showing no local recurrence on the left, versus the large tumor (white arrow) on the pre-treatment CT on the right

Unfortunately, his dementia deteriorated and he died from a combination of hepatic encephalopathy, aspiration pneumonia and sepsis 47 months after the diagnosis of ACSCC.

Bottomley et al. reported the outcome of six HIV-positive AC patients. Durable complete responses with acceptable toxicity occurred in two patients with moderate immunosuppression and Stage I-II tumors treated with CMT (45-Gy in 25 fractions). One patient treated with EBRT alone (60-Gy in 30 fractions in two phases) also had a complete response. Two patients, one with Stage III tumor and the other with pre-existing AIDS, died within six months of treatment. The authors supported the use of CMT in selected patients, but cautioned that the appropriate treatment of patients with more advanced tumors and/or advanced HIV infection is uncertain [10].

The toxicity of CMT with HAART in some recent series might have diminished. In the largest study with 60 cases, Alfa-Wali et al. reported five-year overall survival (OS) of 38% and 68% for the pre- and post-HAART eras, respectively [15]. For patients treated with CMT, the median CD4 fell by half during the first three months of therapy (P < 0.0001) and remained below pre-CMT levels throughout a year of follow-up. Their patient cohort was young (median age 44 years) and healthier, with 78% of the HAART patients having an undetectable viral load. The median CD4 at diagnosis of AC for the entire cohort was 305 mm-3 (range: 16-1252 mm-3). By comparison, the randomized United Kingdom Co-ordinating Committee on Cancer Research ACT I trial included 292 HIV-negative patients treated with CMT and the five-year OS was only 58% [16]. This indicates that the Alfa-Wali study’s patient cohort might not be representative of AC with positive HIV.

Our institutional AC protocol was based on RTOG 98-11 study of 644 HIV-negative patients randomized to neo-adjuvant and concurrent cisplatin with 5-FU versus concurrent mitomycin-C and 5-FU, both with same dose EBRT 45-59 Gy. Their five-year OS (70% versus 75%) and disease-free survival (54% versus 60%) was similar to other studies. Cumulative colostomy rate was reasonable, that is, 10% in mitomycin arm and 19% in cisplatin arm [17]. Since there are not enough AC patients with HIV-positivity to conduct an RCT, we have to assume that they have a much worse outcome and colostomy rate than that of the RTOG study, according to limited retrospective studies and case reports [4,5,10,14,15,18,19]. It should be noted that none of these studies used VMAT, as this new technology just became available in the recent decade.

For HIV-negative AC patients, National Comprehensive Cancer Network (NCCN) Clinical Practice Guidelines in Oncology recommended CMT including IMRT or VMAT at least 30.6-Gy to low risk inguinal lymph node PTV and 45-Gy to high-risk pelvic lymph node PTV, followed by an additional boost of 5.4-14.4 Gy to residual T1-2, T3-4 lesions, or N1 lesions, all in 1.8-2 Gy daily fractions for a total dose of 50.4-59.4 Gy [20]. The recommendation for HIV-positive AC patients is less clear. There was no published report that suggested pelvic irradiation can be safely avoided.

At the time when he passed away due to dementia-related sepsis, he had no evidence of local failure or distant metastasis. We kept his QoL without colostomy for 44 months since the completion of VMAT. This case could be one of the longest AIDS survivors (PubMed search) successfully treated with VMAT alone for locally advanced ACSCC ever reported in the literature.

Our case suggests that VMAT to the primary tumor alone up to 50-Gy in 25 fractions over five weeks, without treating the inguinal or pelvic lymph nodes, can be a safe and effective treatment for node-negative locally advanced ACSCC patients with AIDS even when HIV viral load is over one million and CD4 cell count is very low around 100 mm-3. Long-term local control can be achieved with reasonably tolerated acute and late toxicities. Radical dose, instead of palliative dose, VMAT might be considered for selected patients of this group when CMT is not desirable due to the concerns of severe side effects.

© Copyright 2020
Pan. This is an open access article distributed under the terms of the Creative Commons Attribution License CC-BY 4.0., which permits unrestricted use, distribution, and reproduction in any medium, provided the original author and source are credited.

Figure 6: Last follow-up CT scan showing no local recurrence on the left, versus the large tumor (white arrow) on the pre-treatment CT on the right