We investigated the relationship between acromial shape, classified as Type I-IV by magnetic resonance imaging, and the occurrence and characteristics of rotator cuff tears (RCTs).

No correlation exists between acromial shape and sex, regardless of the specific muscle injured. However, supraspinatus injury, acromial shape, and sex are significantly related; right-side partial tear injuries occur more frequently among women aged ≥ 50 years with flat acromia than other RCTs.

The pathogenesis of a rotator cuff tear (RCT) is multifactorial; however, there are numerous risk factors for the injury, which are classified as either intrinsic or extrinsic. Intrinsic factors include degenerative changes, hypovascularity, and collagen fiber abnormalities. Extrinsic factors include subacromial impingement, stretch overload, the shape of the acromion, and the formation of acromial spurs [2].

The acromial shape can be divided into four types, described using the Bigliani classification: Type I describes a flat shape, Type II is curved, and Type III is hooked [3]. Two years after the original classification was developed, Gagey et al. added Type IV to the classification system, which describes a convex inferior surface [4].

Many studies have investigated the relationship between acromial shape and the incidence of RCT [2-4]. Some of these studies also analyzed the relationship between the presence of an acromion spur and the occurrence of impingement syndrome, which was first described by Neer [5]. In 1972, Neer claimed that acromial shape, specifically, the shape of anterior and inferior parts, was responsible for impingement of the rotator cuff and, therefore, advocated for the utility of anterior acromioplasty to enlarge the subacromial space and decompress the rotator cuff. Numerous studies have supported Neer’s theory of extrinsic impingement leading to cuff disease [2-3, 6]. A recent study involving 104 cases reported the predominant acromial shape to be curved (Type II) and the majority of patients to be female, suggesting this scenario to be the most common cause of shoulder impingement [7]. A study conducted in 2012 suggested that acromial spurs were risk factors for full-thickness RCTs [8].

Imaging techniques, such as magnetic resonance imaging (MRI), are routinely used to evaluate the relationship between acromial shape and RCTs and impingement [9-12]. Some researchers have compared the results of radiographic and MRI examinations for the determination of acromial shape, while others have used magnetic resonance arthrography and ultrasound (US) to diagnose RCTs [8-14]. In the clinic, MRI is the most widely used tool for evaluating the presence and size of RCTs in order to assess the suitability for conservative treatment or requirement for surgery [9-12].

To date, there have been no studies on the association between acromial shape and RCTs in a Saudi Arabian population. The present study aimed to assess this association among adult patients who were treated at King Abdulaziz University Hospital (KAUH) in Jeddah, Saudi Arabia.

The Biomedical Ethics Research Committee approved the study and all its protocols of KAUH (Approval number: 470-19).

This retrospective cohort study recruited patients with full or partial RCTs, aged 25 - 60 years, who were admitted to the Orthopedic Department of KAUH in Jeddah in the western region of Saudi Arabia for surgical repair of the rotator cuffs between January 2014 and April 2019. We assessed the presence of RCTs using a retrospective review of MRI results from KAUH records. The exclusion criteria were as follows: (1) post-traumatic shoulder pain (due to fracture or otherwise); (2) any other shoulder surgery; (3) osteoarthritis of the shoulder joint; (4) inflammatory arthritis; (5) congenital deformity; (6) unstable or frozen shoulder; (7) septic shoulder; (8) bone tumors; and (9) calcified tendinitis. Data were collected from electronic records of KAUH and then entered into a Google form (Google, Inc., Mountain View, CA, USA) and exported to Microsoft Excel 2016 (Microsoft® Corp., Redmond, WA, USA). We collected demographic data (sex, age, medical record number); no names were obtained to preserve patient confidentiality. We recorded the side of injury (right or left), acromial shape (flat, curved, hooked, or convex inferior surface), type of RCTs (partial or complete), and the muscle injured (supraspinatus, infraspinatus, subscapularis, and teres minor).

In total, 954 patients underwent MRI of the shoulders due to pain. Of these, we recruited 89 patients (30 men and 59 women) with RCTs for this study. Some had more than one muscle injury. The mean age was 51.84 (standard deviation (SD): 8.312) years. We identified all four types of acromia based on MRI results (Figure 1). Injuries to the left shoulder were more common than those to the right shoulder among male patients, while the right side was more commonly affected in women (Figure 2). 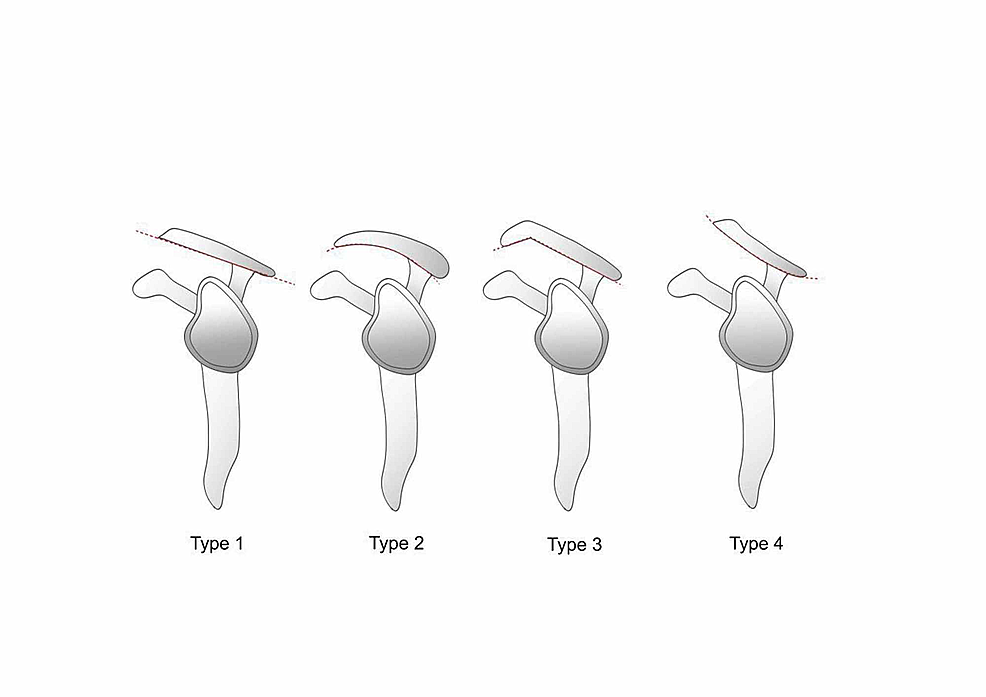 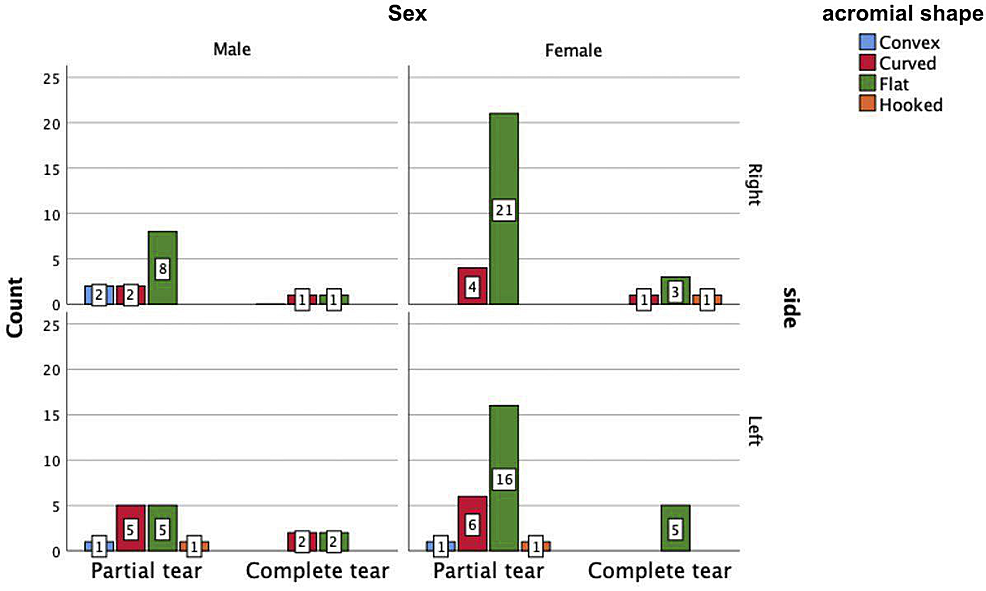 Figure 2: The relation between acromial shape and type of RCT in regard to the sex and side 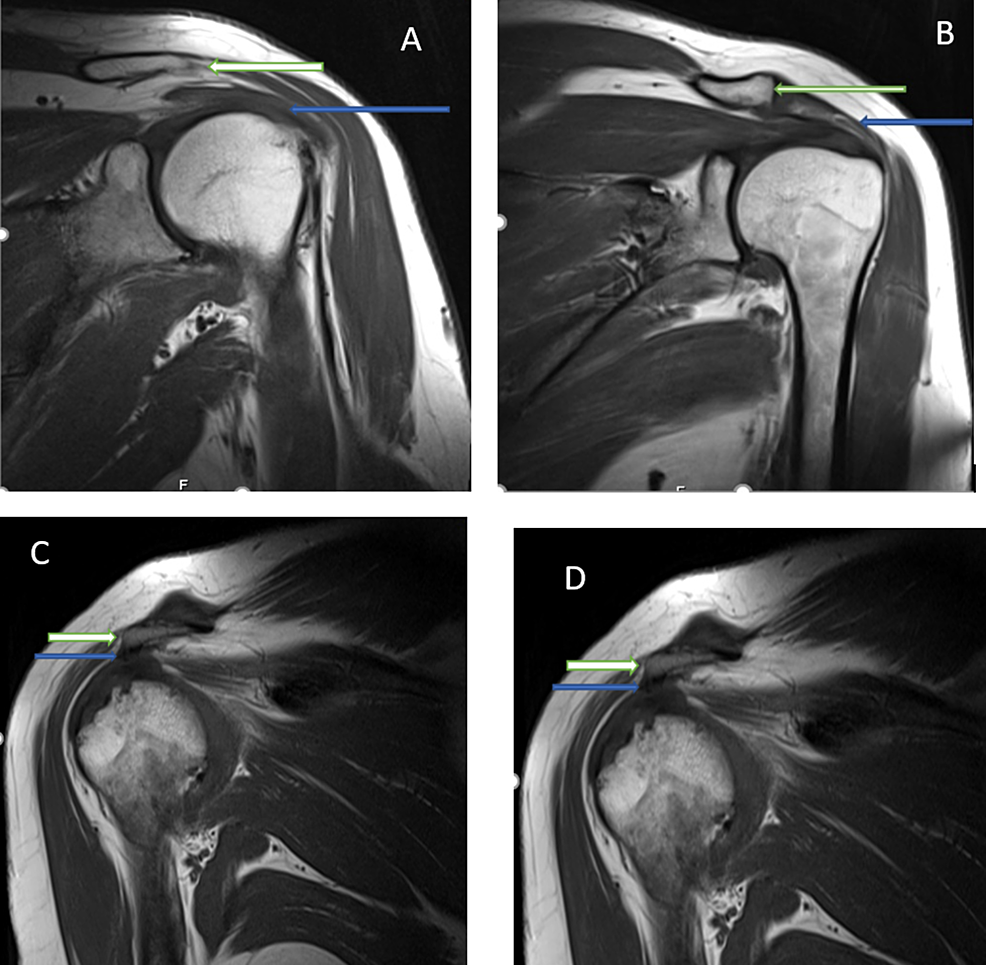 The most common muscle to be injured was the supraspinatus (73.6%) among both male (33.3%) and female (66.7%) patients (Table 1). The majority of these injuries occurred without other muscles being affected (p = 0.030) (Table 2). Figure 3A-D presents MRI images of the observed muscle injuries. Conversely, subscapularis and infraspinatus muscle injuries were more commonly found in combination with other RCTs than alone (p = 0.292 and 0.054, respectively).

Table 3: Frequency of Rotator Cuff Tears (RCTs) Related to the Type of Injury

Table 4: Distribution of Rotator Cuff Muscle Injuries in Relation to Acromial Shape and Types of Tears

Complete RCTs are illustrated in Figure 3A/D, with the supraspinatus being the most commonly affected muscle (72.7%). The flat acromial shape was the most frequently identified in the case of complete RCTs (68.8%), followed by curved (25%) and hooked (6.3%) (Table 3). A convex acromion was not observed in combination with a complete RCT.

We found no significant association between sex and the affected shoulder side, which has not been investigated in any recent studies (p = 0.709).

Finally, there was no significant correlation between sex and the acromial shape (p = 0.104); however, we found that the most common acromial shape in patients who had RCTs was flat, both in men (53.3%) and women (76.3%).

Rotator cuff injuries can be assessed using several imaging modalities. In the present study, we used shoulder MRI to evaluate the relationship between the occurrence of partial or complete RCTs and acromial shape, as multiple studies have proven this modality to be the most useful diagnostic test for rotator cuff injury [4, 12-13, 16].

We found no significant association between sex and the affected shoulder side, which has not been investigated in any recent studies. However, our finding of a lack of a significant correlation between these factors (p = 0.709) supports the results of a previous study [11].

We found a flat acromion to be the most prevalent type among all patients with RCTs. Although in line with the results of an earlier study, we did not find a significant relationship between acromial shape and sex [12]. By contrast, a study conducted by Paraskevas et al. reported the flat acromial shape to be strongly associated with female sex [14]. In contrast, the hooked shape was found to be significantly more common among male patients. We believe that the reason for the discrepancies between these studies may be related to genetic and osteological factors.

The present study has some limitations that should be acknowledged. First, rotator cuff injuries may be influenced by factors, such as degenerative or inflammatory shoulder disease, which were the exclusion criteria in this study. Second, the sample size was small, and patients were recruited from a single center. Therefore, future multicenter studies involving more patients are required to completely confirm the association of acromial shape and RCTs.

In summary, in the context of RCTs, there is no correlation between the four acromial shapes and sex, regardless of the muscle that is injured. However, we identified a significantly higher incidence of partial supraspinatus tears in the right shoulders of women aged ≥ 50 years with flat acromia. The relationship of sex with other RCTs does not appear to be significant.

We thank Anas E. Bifari and Wejdan A. Alghamdi for help with this paper as statisticians. We would also like to thank http://www.editage.com for English language editing.

© Copyright 2020
Almokhtar et al. This is an open access article distributed under the terms of the Creative Commons Attribution License CC-BY 4.0., which permits unrestricted use, distribution, and reproduction in any medium, provided the original author and source are credited.

Figure 2: The relation between acromial shape and type of RCT in regard to the sex and side

Table 3: Frequency of Rotator Cuff Tears (RCTs) Related to the Type of Injury

Table 4: Distribution of Rotator Cuff Muscle Injuries in Relation to Acromial Shape and Types of Tears