We used the Nationwide Inpatient Sample (NIS) to identify the demographic predictors and study the impact of chronic comorbidities on the risk of in-hospital mortality in Alzheimer’s disease (AD).

Alzheimer’s disease (AD) is a progressive neurodegenerative disease that occurs due to the accumulation of abnormal protein folding inside the brain. AD accounts for 60% to 80% of the dementia cases [1]. Genetic mutation is mainly involved in early-onset AD patients, and the combination of genetic, environmental, and lifestyle factors are linked to AD [2]. Aging has been known as the most important risk factor, as the number of patients with AD doubles every five years after the age of 65, and above 85 consists of about one-third of the AD population [2]. In 2020, it is estimated that more than 5.5 million Americans suffer from AD and it is expected to increase to 14 million by 2060 [3]. An estimated annual cost per AD patient is $41,000 to $56,000, with a total cost of $159 billion to $215 billion nationwide in 2010 [4].

Among the AD patients, beta-amyloid plaques and the neurofibrillary tangles in the brain are more widespread and predominant than the elderly patients without AD [5]. These changes in the brain impair the normal neuronal functioning and ultimately lead to disconnections with other neurons [2]. AD is the sixth leading cause of death in the United States (US), and the fifth cause for those aged above 65 years [6]. In 2018, there were 122,019 deaths among those suffering from AD, according to the Centers for Disease Control and Prevention (CDC). However, the number of death from dementia was much higher, about 266,957 in total [7].

Bronchopneumonia is the most common cause of death in a patient with AD due to impaired swallowing ability, inability to clear airways secretions, apathies, and decreased immune function may all be crucial as the underlying causes for bronchopneumonia [8]. This is followed by circulatory system disease with ischemic heart disease accounting for more than 60% of deaths and cancer. Lack of oxygen supply in pneumonia patients with AD may contribute to non-symptomatic coronary atherosclerosis resulting in higher inpatient mortality [8]. Several studies have demonstrated an inverse relationship between neurodegenerative disease and cancer; however, underlying pathology behind this remains unknown [9].

Cross-sectional data analysis was done using the Nationwide Inpatient Sample (NIS, 2012 to 2014) [10]. This dataset includes clinical information during the hospitalization from 4,400 non-federal hospitals and covers about 44 states in the US [10]. Diagnostic information is coded using the International Classification of Diseases, ninth edition (ICD-9) diagnostic codes, and Clinical Classification Software (CCS) codes. The NIS is a publicly available de-identified database and so doesn’t require approval from the institutional review board [10].

We included 132,405 inpatients with a primary discharge diagnosis of AD using ICD-9 code 331.0. Demographic variables included were age, sex, and race (white, black, hispanic, and others) [11]. The chronic comorbidities including diabetes, hypertension, congestive cardiac failure (CCF), chronic pulmonary disease, renal failure, depression, psychosis, and tumor with and without metastasis were identified using ICD-9 or CCS diagnosis codes [11]. The in-hospital mortality in the study population is all-cause [11].

We used descriptive statistics to discern the differences in demographics and comorbidities by in-hospital mortality. Logistic regression analysis was used to evaluate the demographic predictors and impact of comorbidities that increases the risk of association with in-hospital mortality. A P-value of less than 0.01 was considered statistical significance in our data analysis models that were done in the Statistical Package for the Social Sciences (SPSS), version 26 (IBM Corporation, Armonk, NY). 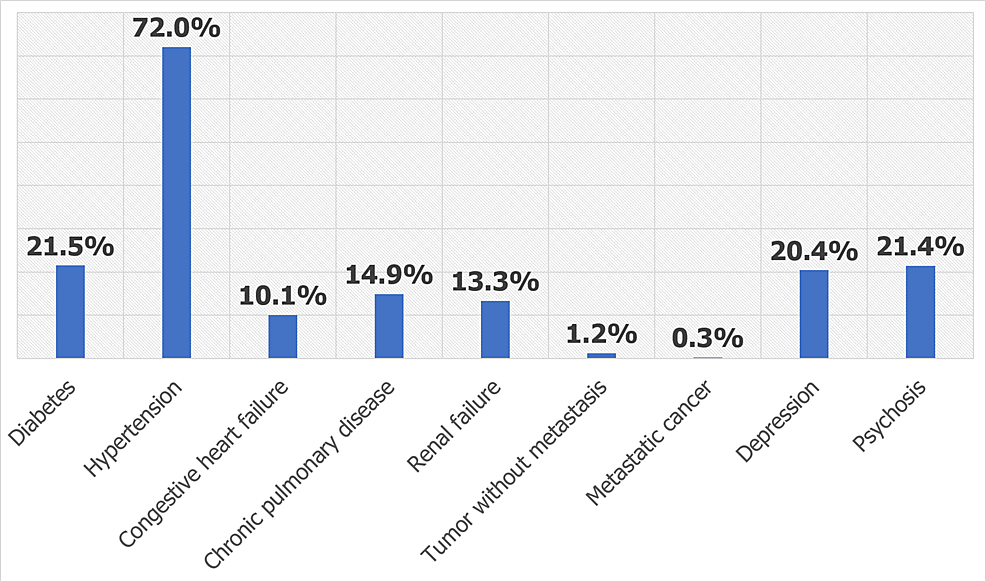 CCF and renal failure were significantly associated with a higher risk of in-hospital mortality in AD inpatients by 1.4 to 1.5 times. Psychiatric comorbidities (depression 20.4%, and psychosis 21.4%) were prevalent in AD inpatients but were negatively associated with mortality. Comorbid tumor without metastasis (1.2%) and metastatic cancer (0.3%) were least prevalent but significantly increases the risk of in-hospital mortality by 1.6 times (95% CI 1.193-2.128) and 2.2 times (95% CI 1.285-3.653), respectively, after controlling for demographic and other comorbidities as shown in Table 1.

In our inpatient study, the mean age of AD inpatients who died during hospitalization was 83.5 years. As per a study, AD is prevalent in the age above 90 years and is projected to increase rapidly [12]. Male AD patients had a 17% higher risk of mortality, which is supported by the Framingham heart study; however, the causal relationship remains speculative [13]. Our AD inpatients from the hispanic race group had higher in-hospital mortality increased by 89%. As per the National Alzheimer’s Coordinating Center data from 30 AD centers in the US (N = 30,916) found that Latino and blacks with AD had a longer survival time compared to the whites [14]. Yet, this study had some limitations, including a lack of uniform process for data acquisition and selection bias [14]. Whites have better access to healthcare for the management of comorbidities and have a higher rate of nursing home placement due to which in our study we found that whites had a lower risk of mortality compared to minority groups [15].

Hypertension is the most prevalent chronic comorbidities (72%), followed by diabetes (21.5%), psychosis (21.4%), and depression in our study AD inpatients. In a study comparing the comorbidities of young-onset versus late-onset AD, circulatory disease and hypertension were most prevalent in both [16]. This is followed by psychiatric disorders, and endocrine and metabolic disorders, and diabetes [16]. Notably, the late-onset AD patients had a significantly higher prevalence rate of hypertension (61.2% vs. 35% in early-onset) and diabetes (20.9% vs. 7.8% in early-onset) [16]. Aging increases the prevalence rate of these chronic comorbidities, which are also risk factors for AD’s progression [17]. Lung diseases, other forms of heart disease, and disease of the genitourinary system are remarkable comorbidity in AD patients; however, they are less prevalent as also seen in our study [16].

The macrovascular and microvascular damage from hypertension and diabetes, consequently, lead to CCF and renal failure. Glomerular hyperfiltration, overactive renin-angiotensin-aldosterone system, and renal dynamic changes may all contribute to renal disease [18]. In our study, we did not find a significant association between hypertension and diabetes and in-hospital mortality, but renal failure and CCF significantly increases mortality risk by 48% and 41%, respectively. Some studies in Parkinson’s disease found that depression and psychosis worsen hospitalization outcomes and disease severity, but this was not seen in our AD patients and was not associated with increased mortality risk [19,20].

Multiple studies suggested that AD is inversely associated with cancer-specific mortality [9,21]. The paired-helical-filament (PHF)-tau tangles were lower in AD patients with cancer, and PHF-tau tangles correlate to cognitive impairment and dementia severity [21]. Cancer patients may have enhanced immune function to reliant AD progression, better lifestyle choices, and possible PHF-tau protein reduction from chemotherapy [21]. However, our study has demonstrated that metastatic and non-metastatic tumor increases the risk of in-hospital mortality by 117% and 59%, respectively, after controlling for demographic confounders and chronic comorbidities.

There are some limitations to our study. Our inpatient population was predominantly white and so may lack population diversity and may not represent the general population. Second, the healthcare availability to minority populations may be underreported in our study sample. Lastly, the inconsistency and reporting bias about using the ICD-9 codes in the database, and lack of causal relationship between mortality in AD and comorbidities. Regardless of this, we have used a large sample population from the hospitals across 44 states in the US with national representation and found an epidemiological association between chronic comorbidities worsening mortality risk in AD patients.

About four-fifth of AD inpatients were white and prevalent comorbidities included hypertension and diabetes. CCF and renal failure were significantly associated with a higher risk of in-hospital mortality in AD patients by 41% and 48%, respectively. In addition, the less prevalent comorbid tumor with/without metastasis also increased the in-hospital mortality by 59% to 117%. Psychiatric comorbidities were prevalent (20% to 21%) but were negatively associated with mortality risk. An integrated care model is required to manage medical and psychiatric comorbidities in AD patients to improve health-related quality of life and reduce morbidity and mortality.

© Copyright 2020
Yen et al. This is an open access article distributed under the terms of the Creative Commons Attribution License CC-BY 4.0., which permits unrestricted use, distribution, and reproduction in any medium, provided the original author and source are credited.