Beta-human chorionic gonadotropin (hCG)-secreting choriocarcinomas are rare, rapidly growing, highly invasive malignant tumors that present most often in the uterus after pregnancy or abortion, as they are remnants from trophoblastic or totipotent germ cells [1,2]. Extragonadal sites that have been reported include the gastrointestinal tract, liver, lung, breast, prostate, urinary bladder, and nose [2,3]. Primary extragonadal choriocarcinomas are very rare, with the majority within or along with adenocarcinomas of the organ in question [2,3]. Presenting symptoms may range from end-stage malignancy with obstructive and metastatic symptoms to common complaints such as pruritus, jaundice, and overt or occult anemia. Although multiple theories regarding the histogenesis of duodenal choriocarcinomas exist, the highly invasive nature of this tumor warrants timely evaluation, as many patients are diagnosed in the metastatic stage [2].

CT of the chest/abdomen/pelvis with intravenous contrast revealed a large (7.5 x 5.0 x 7.0 cm), non-obstructing, lobulated mass in the second and third part of the duodenum, displacing the head of the pancreas superiorly and anteriorly (Figure 1). An adjacent satellite lesion to the left of the dominant mass measured 3.5 x 2.5 cm, with two regional lymph nodes in the adjacent bowel mesentery. Both pancreatic duct dilation (6 mm at the site of pancreatic head) and common bile duct dilation (15 mm), with accompanying intrahepatic duct dilation, are shown (Figure 1). Upper endoscopy with biopsies was later performed. Biopsy diagnosis revealed an invasive, well-differentiated adenocarcinoma with cytoplasmic-stained cells with antibody to beta-hCG antigen, suggesting a choriocarcinoma (Figures 2, 3). Treatment included biliary drainage with a percutaneous transhepatic catheter and folinic acid, fluorouracil, and oxaliplatin (FOLFOX) chemotherapy. A CT scan done five months later revealed an increase in duodenal tumor size with invasion into the pancreas and right hepatic lobe. Palliative radiotherapy was initiated, but the patient died several months later. 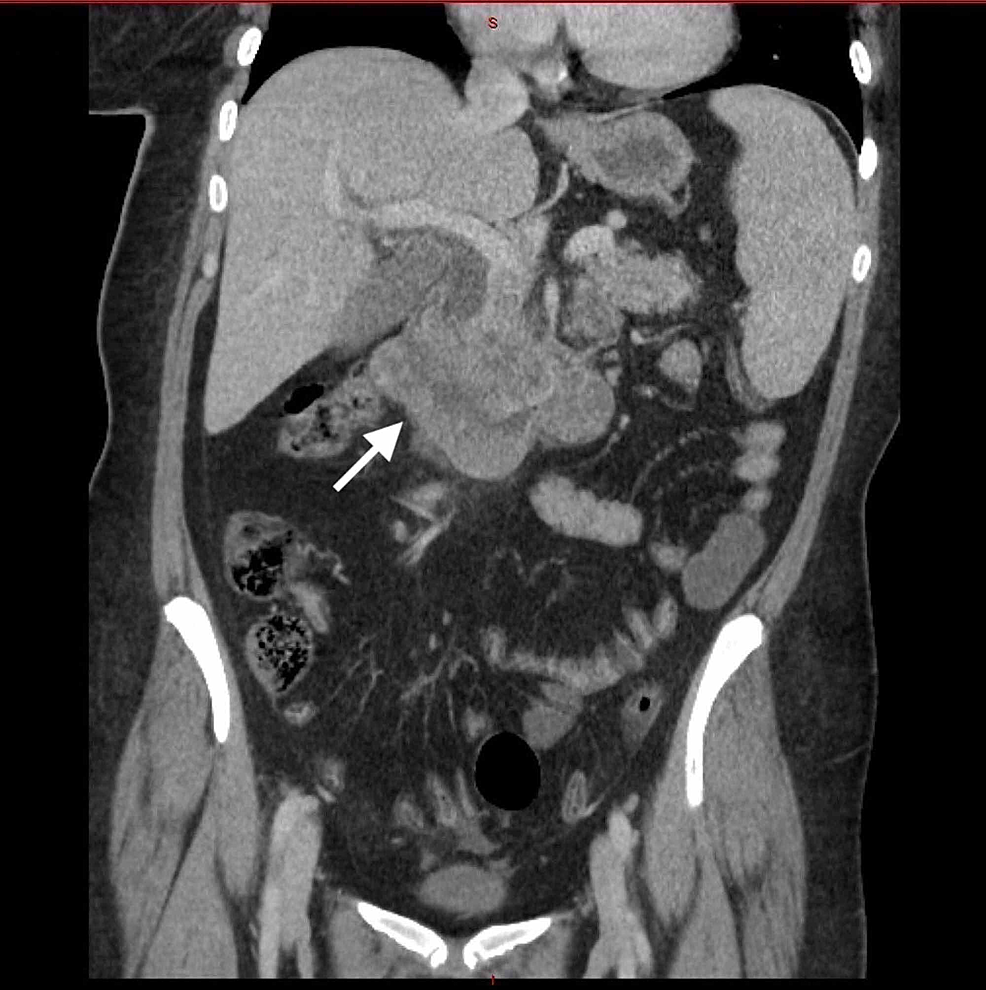 Figure 1: CT of the chest/abdomen/pelvis with intravenous contrast revealed a large, non-obstructing, lobulated mass in the second and third part of the duodenum 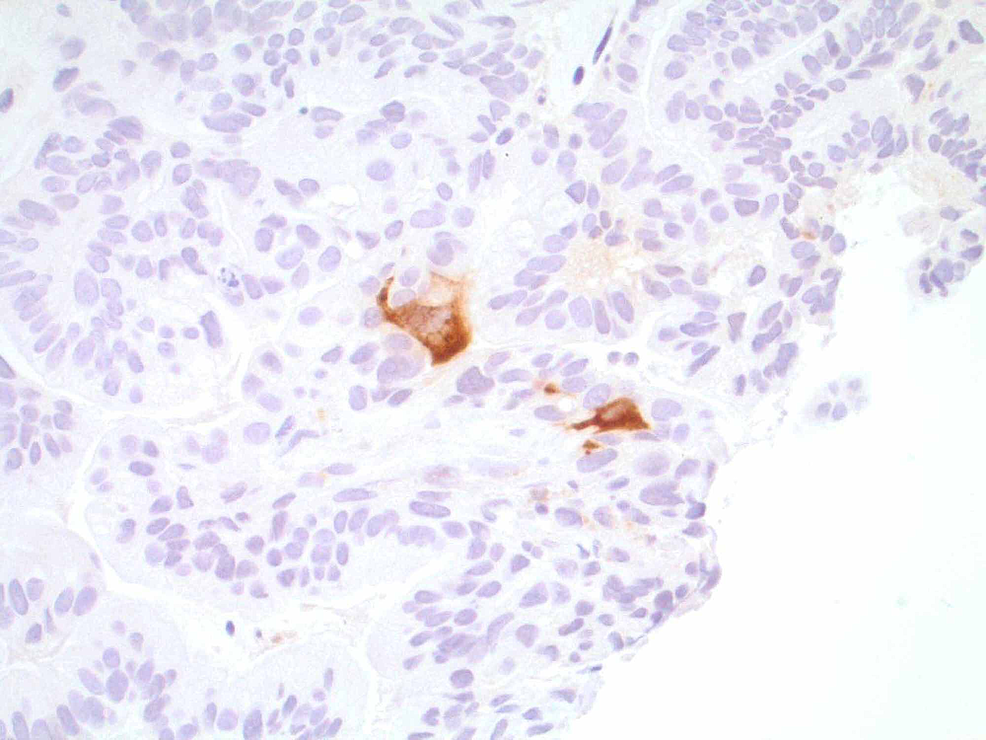 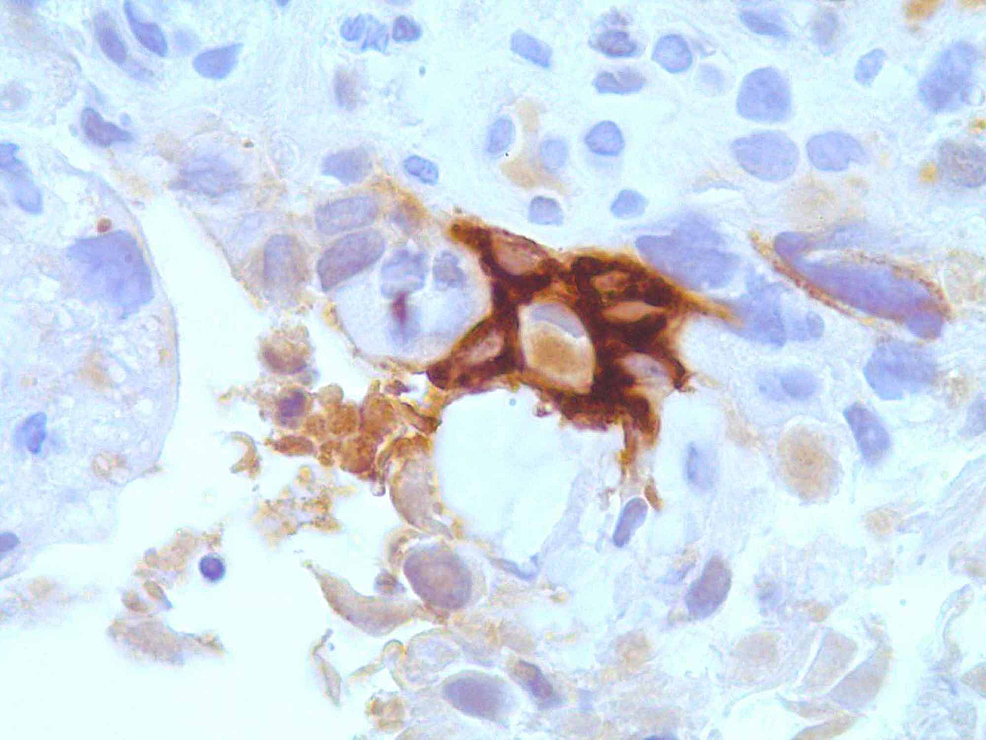 Regarding the gastrointestinal tract, patients may present with anemia or bleeding from the ulcerated mass, mimicking peptic ulcer disease [3]. Our patient’s advanced duodenal tumor caused biliary obstruction-induced jaundice as initial presentation, with subsequent radiographic pancreatic and biliary duct obstruction. Management begins with identifying the source of jaundice and anemia. If the tumor cannot be medically treated with chemotherapy, more palliative radiotherapy-induced tumor reduction can relieve pain, mitigate blood loss, and reverse gastrointestinal luminal, biliary, and pancreatic obstruction. There is no overt consensus regarding therapeutic strategies, as the histogenetic pathway is still debatable. Oftentimes, chemotherapies used for gestational choriocarcinoma are utilized [5]. Those with solely choriocarcinoma components have been treated with methotrexate regimens [6]. Moreover, treatment regimens, such as ours with FOLFOX, have also targeted the adenocarcinoma component of the small bowel tumor [6-8]. No human epidermal growth factor receptor 2 (HER-2) positivity was seen in our case, but some reports of HER-2-positive cases to date have shown a positive adenocarcinoma or choriocarcinoma component response with trastuzumab combined with docetaxel and carboplatin [4]. There remains a paucity of documented cases with gastrointestinal choriocarcinoma tumors to clearly guide treatment algorithms. Thus, it remains imperative to monitor the case-by-case response to scientifically guided therapies. Our patient initially was given chemotherapeutics; however, both clinical and radiographic data on subsequent monitoring eventually led to more palliative care prior to the patient’s fatal decline.

While it remains imperative to consider common diagnosis in the differential diagnosis, it remains prudent to also consider atypical disease entities when numerous clinical evaluations and testing modalities are equivocal. Jaundice, elevated beta-hCG, and female gender - in a young individual - all suggest pregnancy as the leading diagnosis. However, with a negative pregnancy workup, clinical anemia, and later suspicious endoscopic findings, one must consider more atypical diagnoses. Our case reinforces the importance of a multi-disciplinary approach to a difficult patient diagnostic workup, coordinating the specialty-specific care of radiologists, endoscopists, and pathologists with the primary medical care team.

© Copyright 2020
Berry et al. This is an open access article distributed under the terms of the Creative Commons Attribution License CC-BY 4.0., which permits unrestricted use, distribution, and reproduction in any medium, provided the original author and source are credited.

Figure 1: CT of the chest/abdomen/pelvis with intravenous contrast revealed a large, non-obstructing, lobulated mass in the second and third part of the duodenum