Infective endocarditis is a rare disease and is associated with a high mortality rate. The following case describes a 56-year-old gentleman who presented to our hospital with a pulseless left leg concerning for acute limb ischemia, which was managed with emergent revascularization. His subsequent workup revealed IE due to a rare organism known as Streptococcus dysgalactiae. Through this case, we want to showcase this rare cause of IE and also highlight systemic embolization as its possible initial presentation.

The most common presenting feature of endocarditis is fever (96%), with the vascular embolic event being a presenting feature in less than 17% of the cases [2]. Embolization to the peripheral arteries has been observed in only 2.6% of endocarditis cases [3]. The mortality rate of IE remains high at 9.8% [4]. Peripheral arterial emboli as a result of IE can be catastrophic. Early recognition and management of IE remains crucial.

We present a case of acute IE with the initial presentation of systemic embolization from a rare cause of IE, Streptococcus dysgalactiae.

A 56-year-old gentleman with a past medical history of untreated hepatitis C infection, osteomyelitis with right fourth toe amputation (wound cultures positive for beta-hemolytic G streptococci), and alcohol abuse (12 beers per day) presented with paresthesias and a pulseless left leg. He was noted to be febrile (102.9⸰F), normotensive, tachycardic (117 beats/minute), and saturating well on room air. 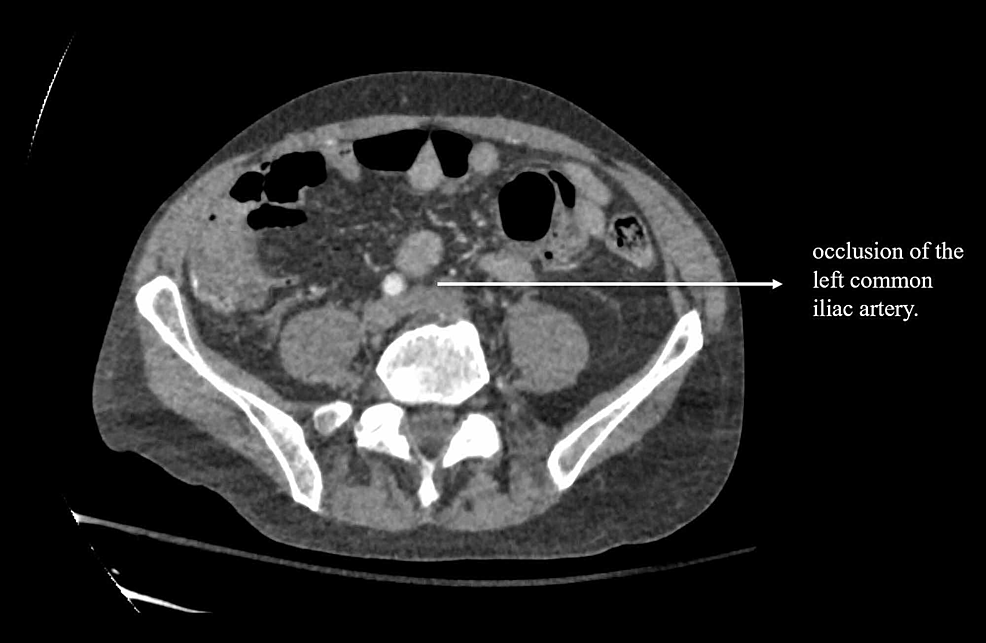 Figure 1: CT of the abdomen and pelvis with contrast demonstrating occlusion of the left common iliac artery. 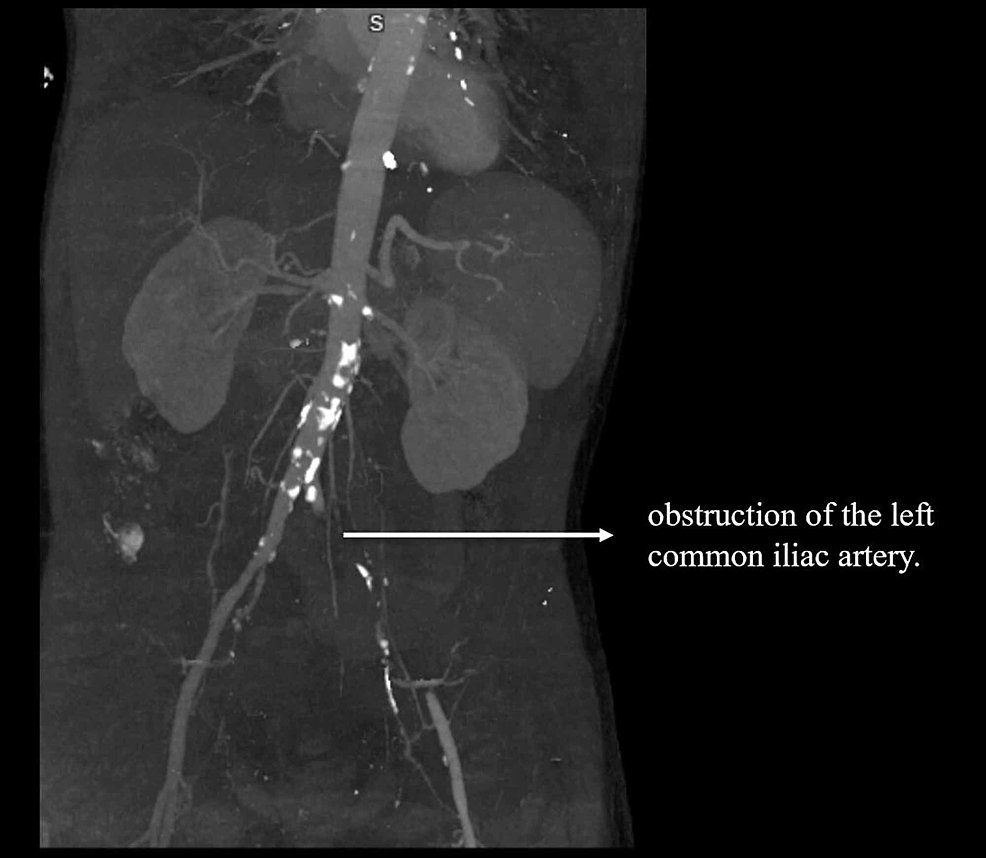 Given his presentation with acute limb ischemia and septic shock, an IE workup was initiated. Transthoracic echocardiogram showed normal ejection fraction and mobile vegetation on the aortic valve along with severe aortic regurgitation (Figure 3). Findings were confirmed on a transesophageal echocardiogram. MRI of the thoracic and lumbar spine was unremarkable, but MRI of the brain showed septic emboli in bilateral cerebral hemispheres and the left cerebellar hemisphere. CT angiogram of the head and neck was negative for a mycotic aneurysm. He was evaluated by cardiothoracic surgery, and he underwent aortic valve replacement. Upon hemodynamic stabilization, he was discharged to the rehabilitation center, one month after his initial hospitalization. 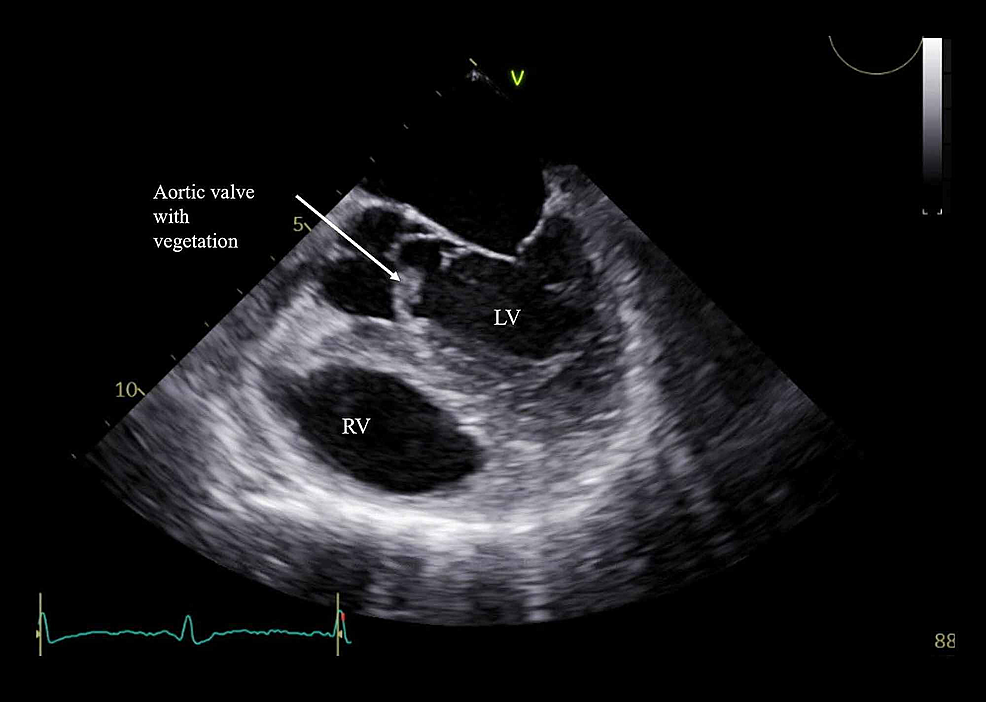 Systemic embolization of vegetation occurs in 22%-50% of cases with IE, with the highest embolic complications seen in people with the involvement of the mitral and aortic valves with Staphylococcus aureus, Candida species, HACEK organisms (namely Haemophilus species, Aggregatibacter actinomycetemcomitans, Cardiobacterium hominis, Eikenella corrodens, and Kingella kingae), and Abiotrophia organisms [8]. In a study of 384 patients, Thuny et al. found that only 10 cases (2.6%) presented with embolization to peripheral arteries and 62 cases (16.1%) presented with embolization to the central nervous system [3]. Our case demonstrates a patient with septic embolization to both the central nervous system and the peripheral arteries, which is a rare phenomenon occurring due to a rare organism.

Based on the guidelines of the American Heart Association, surgical intervention is essential in patients with persistent vegetation after embolization, >10 mm size of the anterior mitral leaflet vegetation, one or more embolic events during the first two weeks of antimicrobial therapy, or an increase in vegetation size despite therapy as a potential need for surgical intervention [1]. The other indications are aortic or mitral insufficiency with signs of heart failure unresponsive to medical therapy or signs of valve perforation or rupture [1]. Our patient had features of acute aortic insufficiency with acute heart failure, in addition to systemic embolization, due to which surgical intervention was warranted.

Through this case, we hope to highlight the diversity in initial presentations of IE, especially when caused by an atypical organism such as Streptococcus dysgalactiae. We also want to emphasize the importance of prompt recognition and management of IE. Despite multiple comorbidities, the underlying infectious source was controlled by surgical intervention in our patient leading to stabilization and ultimately increasing longevity.

© Copyright 2020
Riaz et al. This is an open access article distributed under the terms of the Creative Commons Attribution License CC-BY 4.0., which permits unrestricted use, distribution, and reproduction in any medium, provided the original author and source are credited.

Figure 1: CT of the abdomen and pelvis with contrast demonstrating occlusion of the left common iliac artery.