Keratoacanthoma is considered a less-aggressive subtype of cutaneous squamous cell carcinoma, but occasionally behaves more aggressively and invades surrounding tissue. It usually occurs on sun-exposed sites in the older population and its classification is still debated in the literature [1]. We present a case report of a keratoacanthoma-type squamous cell carcinoma treated with an intralesional therapy of methotrexate.

A 95-year-old man presented for a tender lesion on the right thumb that had been present for more than two weeks. His medical history included numerous nonmelanoma skin cancers, no family history of melanoma, no other skin lesions or rashes of concern, and no associated unexplained fevers or weight loss. He appeared well developed, well nourished, and in no apparent distress.

On the palmar aspect of the right thumb metacarpophalangeal joint was a 4.5×3.5 cm keratotic indurated flesh-colored nodule with a central keratotic core (Figure 1). It did not appear to be mobile, but did have a suggestion of deep extension. It was tender to palpation, with moderate pain severity, and could not be drained. Examination of the right epitrochlear and right axillary lymph node region was unremarkable. 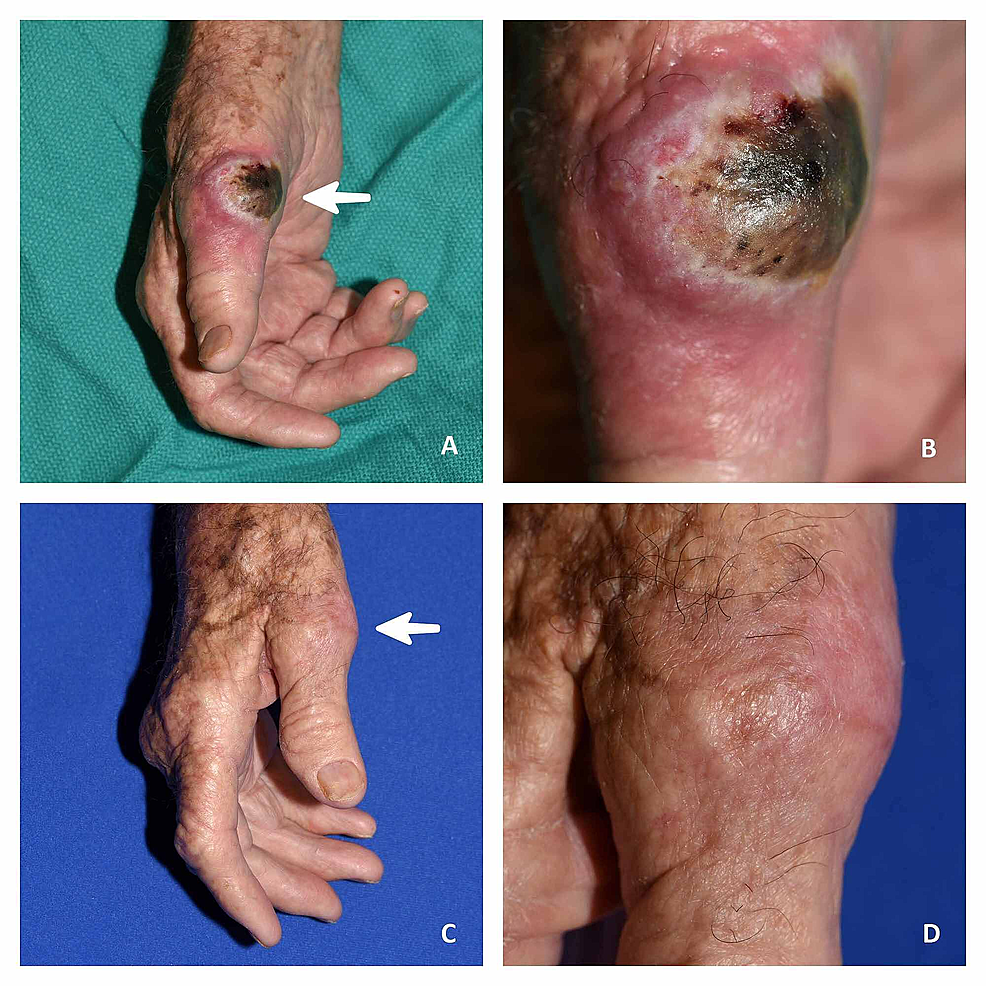 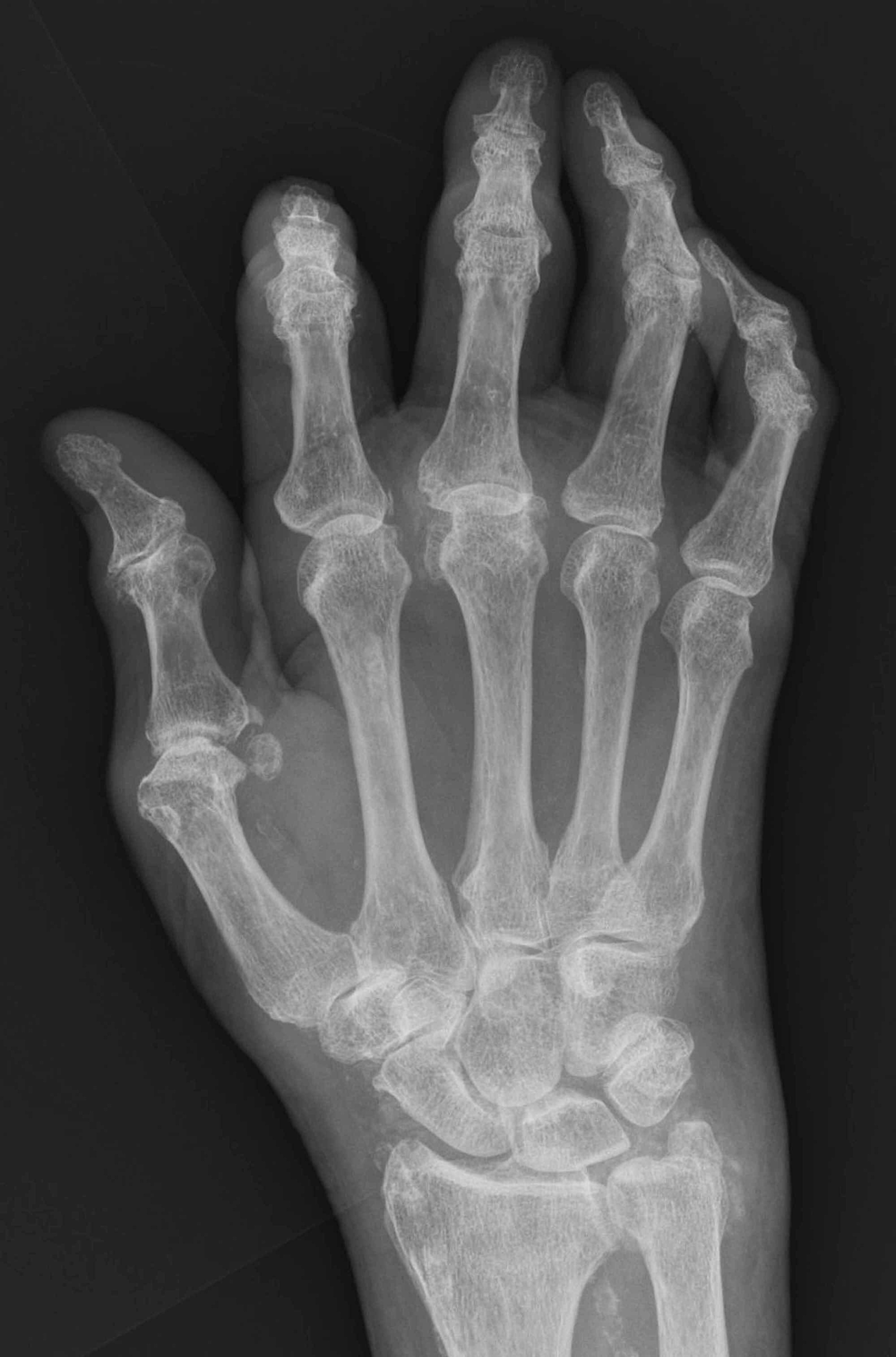 Figure 2: Radiography of the right hand. No bone involvement is observed.

The patient and his son declined the proposed treatment with amputation due to his age. They accepted the proposed nonsurgical treatment with intralesional methotrexate. After an alcohol and Techni-Care skin preparation using an antiseptic from the Care-Tech Laboratories, Inc. (St. Louis, MO), the tumor borders at four quadrants and central portion were injected with 12.5 mg/mL each of intralesional methotrexate, for a total of 2 mL, 25 mg of methotrexate. The treatment was repeated twice more at an interval of one month.

The tumor showed considerable regression after the first injection, and had completely disappeared at three-month follow-up. The patient tolerated the procedure without any difficulty or adverse effect.

The standard treatment of a keratoacanthoma is the surgical excision of the lesion, but several nonsurgical treatments, including radiation therapy, oral retinoids, and intralesional application of 5-fluorouracil, methotrexate, and interferon α-2a, have been reported for patients who refuse or are unable to tolerate surgery [2].

Methotrexate is a folate antagonist that binds and inhibits dihydrofolate reductase and thymidylate synthase in the folate cycle and the pathway of de novo biosynthesis of purine nucleotides from ribose 5-phosphate, thus inhibiting DNA synthesis in actively dividing cells [3]. It is commonly used in systemic chemotherapy, but may be placed directly into neoplasm, with less systemic toxicity.

Intralesional therapy with methotrexate is a potential noninvasive medical treatment that should be considered for all keratoacathoma-type squamous cell carcinomas when patients are not amenable to surgery or radiation therapy. It is an inexpensive and relatively painless procedure that offers a great aesthetic outcome and might prevent a wide surgical resection and further reconstruction.

This study was supported in part by the Mayo Clinic Center for Individualized Medicine and Plastic Surgery Foundation.

© Copyright 2020
Sisti et al. This is an open access article distributed under the terms of the Creative Commons Attribution License CC-BY 4.0., which permits unrestricted use, distribution, and reproduction in any medium, provided the original author and source are credited.

Figure 2: Radiography of the right hand. No bone involvement is observed.