To understand the region-wise differences in demographics, comorbid substance abuse, and hospital outcomes in adult schizophrenia inpatients with cannabis abuse and medication non-compliance.

We included 51,975 adults (18-65 years) from the Nationwide Inpatient Sample (2012 to 2014) with a primary diagnosis of schizophrenia and comorbid diagnosis of cannabis abuse and medication non-compliance. We used descriptive statistics and linear-by-linear association to evaluate the region-wise differences in demographics and comorbid substance abuse. Analysis of variance was used for continuous variables such as length of stay (LOS) and total charges during hospitalization to measure the differences across the regions.

Cannabis abuse and medication non-compliance in schizophrenia patients were prevalent in the NE region of the United States and in the overall regions, and affects young adults, males, and Blacks from low-income families. This is associated with higher hospitalization stay and cost, which indirectly increase the healthcare burden.

In our study, we used the national inpatient data from the U.S. hospitals to understand the region-wise differences in demographics, comorbid substance abuse, and outcomes (hospitalization stay and charges) in adult schizophrenia inpatients with cannabis abuse and medication non-compliance.

We conducted a retrospective study using the Nationwide Inpatient Sample (NIS) data from January 2012 to December 2014 from the Healthcare Cost and Utilization Project (HCUP) [15]. The NIS provides patient health records from around 4,400 non-federal and community-based hospitals across 44 states in the U.S. Census region was obtained using the American hospital association annual survey of hospitals [15]. Diagnostic information in the NIS is identified using the International Classification of Diseases, Ninth Edition (ICD-9) codes and the Clinical Classification Software (CCS) codes [15]. As per the U.S. Census Bureau, the states included in each region are as follows: northeast (NE), midwest (MW), south, and west (Figure 1) [16]. 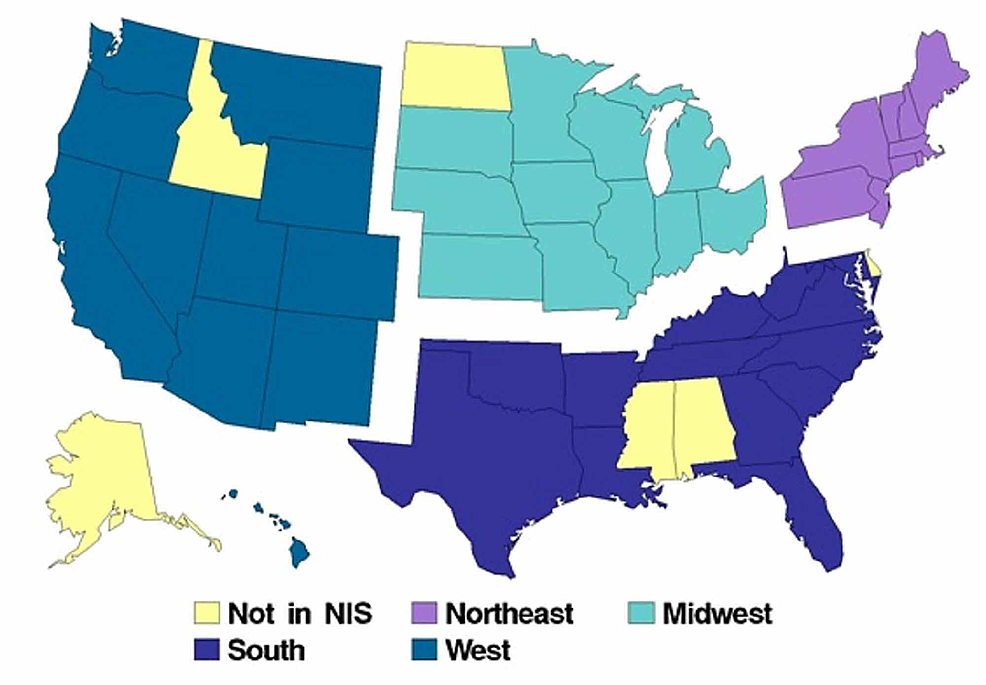 The demographic characteristics included age (18-35, 36-50, and 51-65 years), sex (male or female), race (white, black, Hispanic, and Asian/native American), and median household income (based on percentiles) [16]. The comorbid substance included alcohol abuse, tobacco abuse, amphetamine abuse, cocaine abuse, and opioid abuse, which were identified using ICD-9 diagnosis codes [16]. Length of stay (LOS) in the NIS is calculated as a number of nights the patient stayed in the hospital for the management of schizophrenia, and total charges do not include professional fees and/or other non-covered charges during hospitalization [16].

We used descriptive statistics and linear-by-linear association to evaluate the region-wise differences in demographic and comorbid substance abuse in the study inpatient population. Analysis of variance was used for the continuous variables (age, LOS, and total charges) to measure the differences across the regions. A P-value of less than 0.01 was used to decide the statistical significance in the data analyses conducted using SPSS Version 26 (IBM Corp., Armonk, NY, USA).

Individual identifiers were used to protect patient health information, and therefore this is a de-identified database that does not require the Institutional Review Board approval [15].

The most prevalent comorbid substances in the study population were tobacco (46.3%) and alcohol (32.3%), with a higher rate seen in the MW region (tobacco abuse: 57.5%; alcohol abuse: 34.1%). Opioid abuse was the less preferred substance in the study population (4.5% in NE and 6.4% in MW) and there was statistically no significant difference across the regions (P = 0.051). Among the stimulants, cocaine abuse was more prevalent (22%) versus methamphetamine abuse (8.6%) in the overall population, but the trend was different in the west region, with methamphetamine abuse (33.5%) being greater than cocaine abuse (13.5%) (Figure 2). 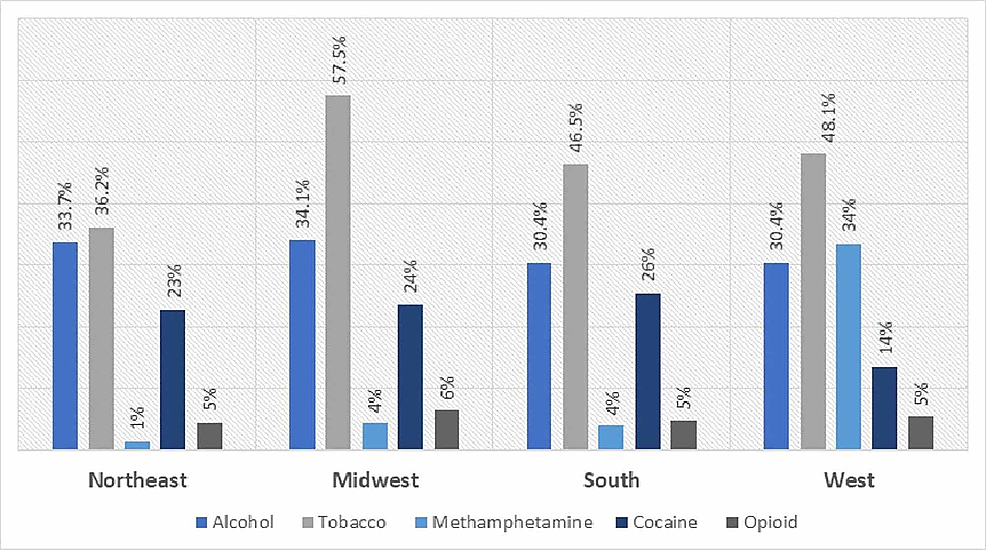 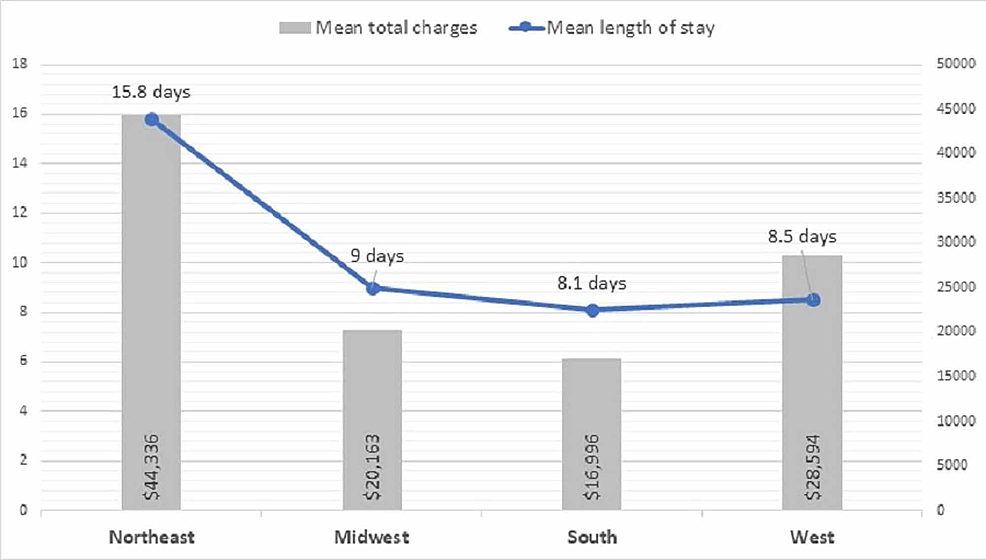 In our study population of schizophrenia inpatients with cannabis abuse and medication non-compliance, around 30.4% inpatients were from the NE region of the U.S., with the lowest in the west region (18%). A similar geographical distribution was seen in a meta-analysis (N = 420,000; age: 12-24 years) by Leinweber et al. with an estimated annual incidence of cannabis use being highest in the NE region (9%) and the lowest in the west region (3%) [17]. Also, the medication non-compliance rate was high in the south region and lowest in the MW region (40.24% vs. 15.35%; P = 0.003) [6].

About three-fifths of our study inpatients were young adults (18 to 35 years), with the majority of the patients from the south (65.1%) and NE (64.3%) regions in this age group. Also, self-reported cannabis use was seen more in younger individuals (19-20 years) with the risk of developing cannabis use disorder (CUD) over a period of 15 years [18]. Young adults had four “typical” reasons for cannabis use, including “to feel good/get high”, “to have a good time with friends”, “to experiment”, and “to relax” [18]. Overall, 80.5% (range: 78.6-82.2% per region) cannabis user males had medication non-compliance issue. A nearly similar result was seen in a cross-sectional survey of cannabis users (N = 2,374), with 57.7% men with medication non-compliance, though there existed a significant difference in cannabis addictiveness, with a much higher percentage in females (17.5% vs. 11.3% in males; P <0.001) [19]. This probably could be due to the reason that females may lack knowledge about the addictive nature of cannabis [19]. Males with schizophrenia were more non-compliant with antipsychotic medications compared with females (51.84% vs. 48.15%; P = 0.01) [6]. But, a study by Acosta et al. found a non-significant association between gender and medication non-compliance (77.8% in men vs. 22.2% in women; P = 0.351) [20].

Among races, a higher proportion (54.1%) of blacks had medication non-compliance and cannabis use, with a much lower prevalence in the whites. This was contrary to the past study that found that the whites were more non-compliant to regimen compared with non-whites [6]. Also, patients from poor socioeconomic status had a high prevalence (69.9%) of medication non-compliance compared with those from high socioeconomic status (11.2%) [6]. These findings correlate with our study findings of 48.6% in patients from low-income families below 25th percentile versus 12.7% in those from median income above 75th percentile income. Also, a longitudinal cohort study including 1,037 individuals followed from birth to ages 18 to 38 years found that those with regular cannabis use faced drifting of socioeconomic status toward the lower side along with workplace and relationship problems in early midlife [21].

The most prevalent comorbid substances in our study inpatients were tobacco (46.3%) and alcohol (32.3%). This finding was consistent with another national study (N = 6,624) that found that 44.7% of lifetime cannabis users can use any other illicit substance, which may be related to the severity of the current substance use and comorbid psychiatric disorders [22]. A nationwide survey of self-reported adult schizophrenia patients (N = 876) found that medication adverse effects such as extrapyramidal symptoms, tardive dyskinesia, agitation, and sedation were significantly associated medication non-compliance [23,24].

A study of 9,889 schizophrenia patients found that young adults (18 to 35 years) had higher inpatient costs ($15,692 vs. $10,274; P < 0.001) and longer LOS (9.6 vs. 5.9 days; P < 0.001) compared with older adults [25]. In our study, the longer hospitalization stay and the higher cost were seen in the NE region, with mean LOS of 16 days and total charges of $44,336 per hospitalization. This possibly could be because around three-fifths of the population in the NE region comprise young adults. Also, young adults have more psychiatric comorbidities compared with older individuals with schizophrenia, which may impact psychiatric care and hospital LOS [25].

Our study has few limitations such as NIS being an administrative database deficient of the patient-level information with a higher possibility of selection bias. Due to the cross-sectional nature of the study, we were not able to address the impact of medication non-compliance during and after receiving psychiatric inpatient care. We were not able to interpret re-hospitalizations, which may add to the total inpatient visits in the study. Despite these limitations, using the NIS we provided an exclusive population-based perspective on the trend of region-wise hospitalization of adult schizophrenia inpatients with cannabis abuse and medication and non-compliance.

Cannabis abuse and medication non-compliance in schizophrenia patients were prevalent in the NE region of the U.S. and in the overall regions, and affects young adults, males, and blacks from low-income families. This is associated with higher hospitalization stay and cost due to which both CUD and medication non-compliance indirectly increase the healthcare burden and worsen the quality of life in schizophrenia patients.

© Copyright 2020
Vadukapuram et al. This is an open access article distributed under the terms of the Creative Commons Attribution License CC-BY 4.0., which permits unrestricted use, distribution, and reproduction in any medium, provided the original author and source are credited.

Dermatitis Artefacta, a Form of Factitial Disorder Imposed on Self, Misdiagn ...