The patient presented with right-sided weakness. Her history was significant for femur chondrosarcoma which was resected and treated. Laboratory analysis revealed persistent hypercalcemia and hyperglycemia. MRI of the brain was completed, which revealed a left parietal-occipital lesion with smaller lesions in the left frontal and right parietal lobe.

Our paper delineates this unique case of intracranial spread of femur chondrosarcoma.

The most common cause of neoplastic intracranial mass lesions is metastatic disease, followed by primary brain tumors. Recent studies have shown that brain metastases make up about 49% of intracranial neoplasms while gliomas make up 26%, followed by meningiomas, pituitary adenomas, and schwannomas. The most common metastatic tumors to the central nervous system are lung, breast, prostate, and renal carcinomas. Chondrosarcomatous metastatic disease to the brain is exceedingly rare [1-3]. Isolated cases of metastatic disease from intracranial sources have been observed; however, chondrosarcoma metastasizing to the brain from an extracranial source has not yet been reported in the literature.

The patient is a 51-year-old female who came to the emergency department with complaints of right-sided weakness after a recent trip to Mexico. Physical exam revealed 4/5 motor strength in the right arm and leg. An MRI of the brain with and without contrast was obtained, which revealed ring-enhancing lesion in the left parietal-occipital lobe (Figure 1). Smaller lesions were also seen in the left frontal and right parietal intraparenchymal regions. A more in-depth review of her medical history revealed that she had a remote history of left femur chondrosarcoma, which was diagnosed after she had developed severe hip pain in the past. She later developed tumor spread to the lung as well at that time. She also had persistent hypercalcemia and hyperglycemia even after a gross total resection of the femur lesion. She recovered after her femur surgery and was subsequently discharged to home at that time.

Figure 1: Preoperative and postoperative magnetic resonance imaging of the brain revealing a ring-enhancing mass in the left parieto-occipital lobe.

Based on the patient’s previous history and diagnostic studies, our differential diagnosis was intracranial metastasis, primary brain tumor, and neurocysticercosis. Craniotomy for lesion resection and biopsy for pathology was performed, significant for metastatic chondrosarcoma in the resected mass (Figure 2). 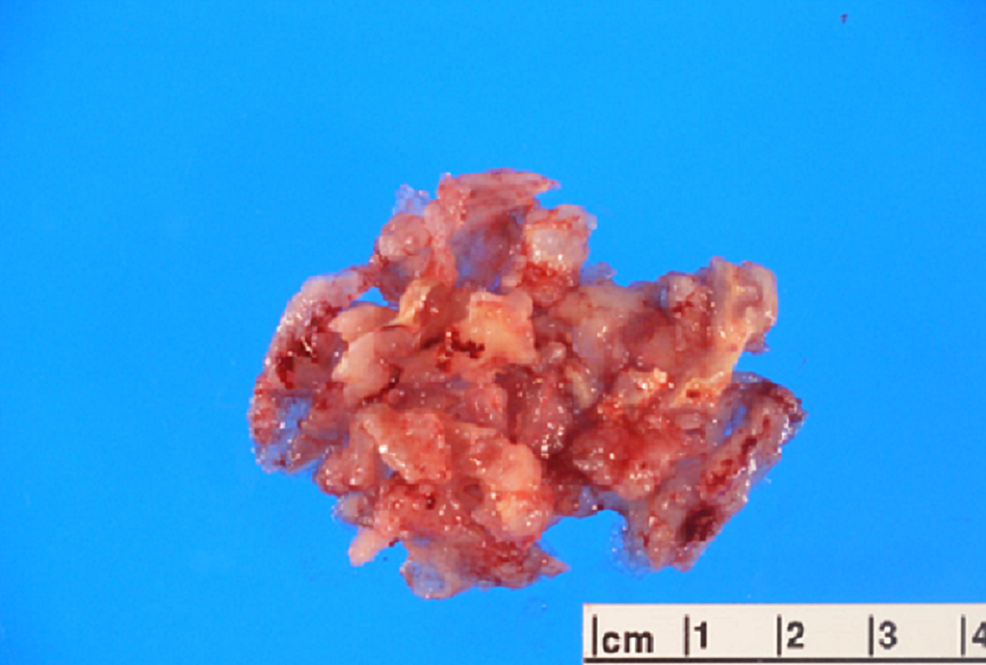 Cytology and pathology stain slides were described as sheets of chondrocytes separated by bands of myxoid stroma. The individual cells were anaplastic with mitoses and pleomorphism (Figures 3-8). 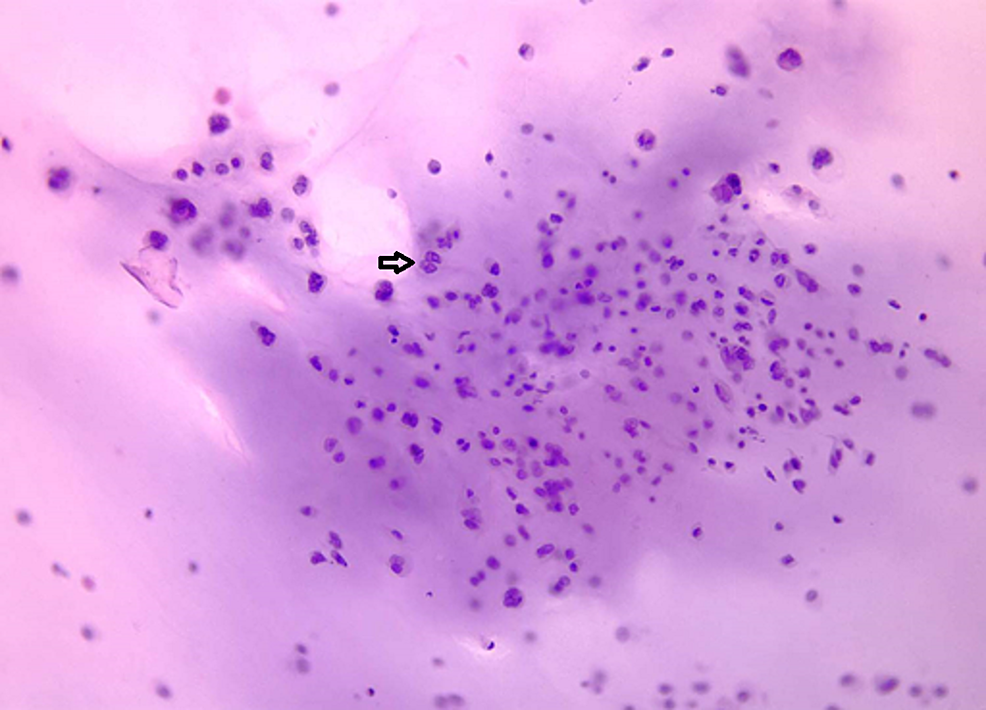 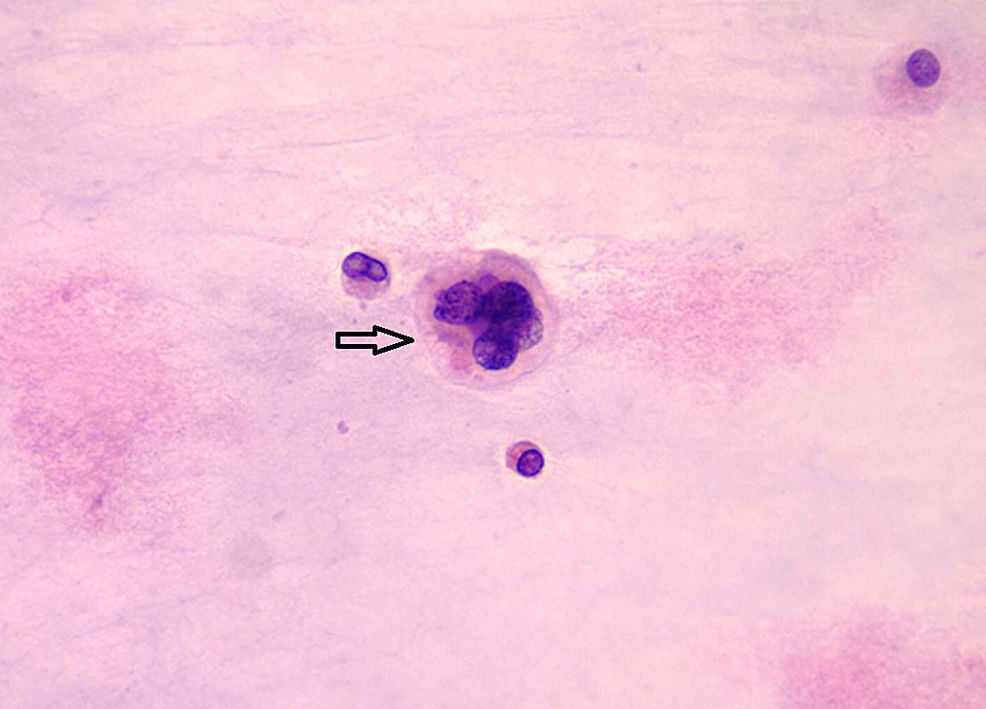 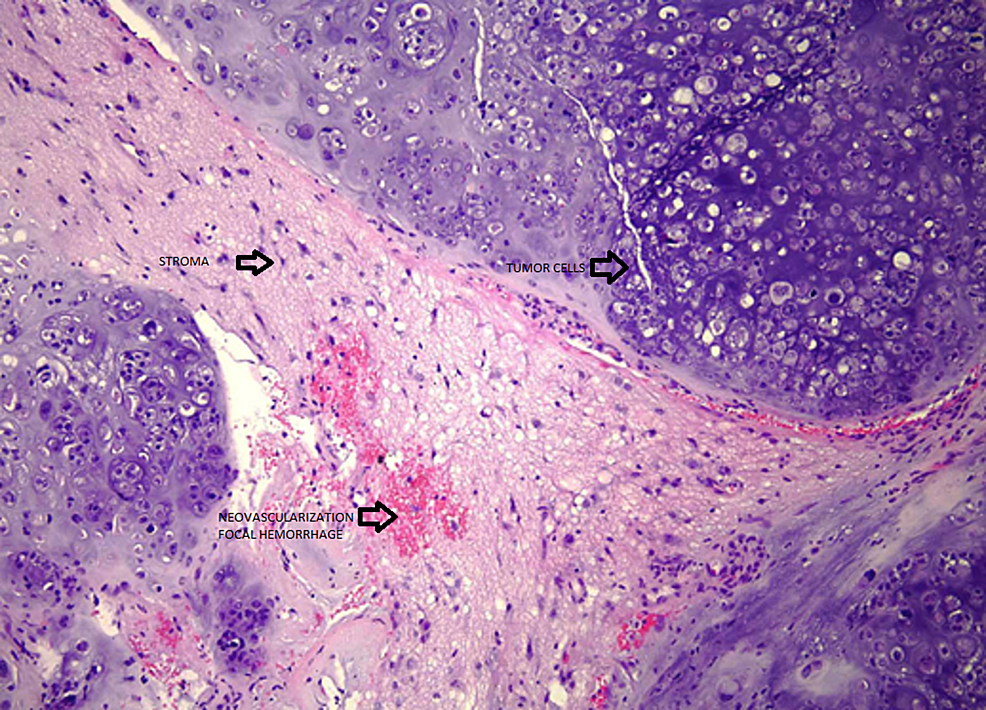 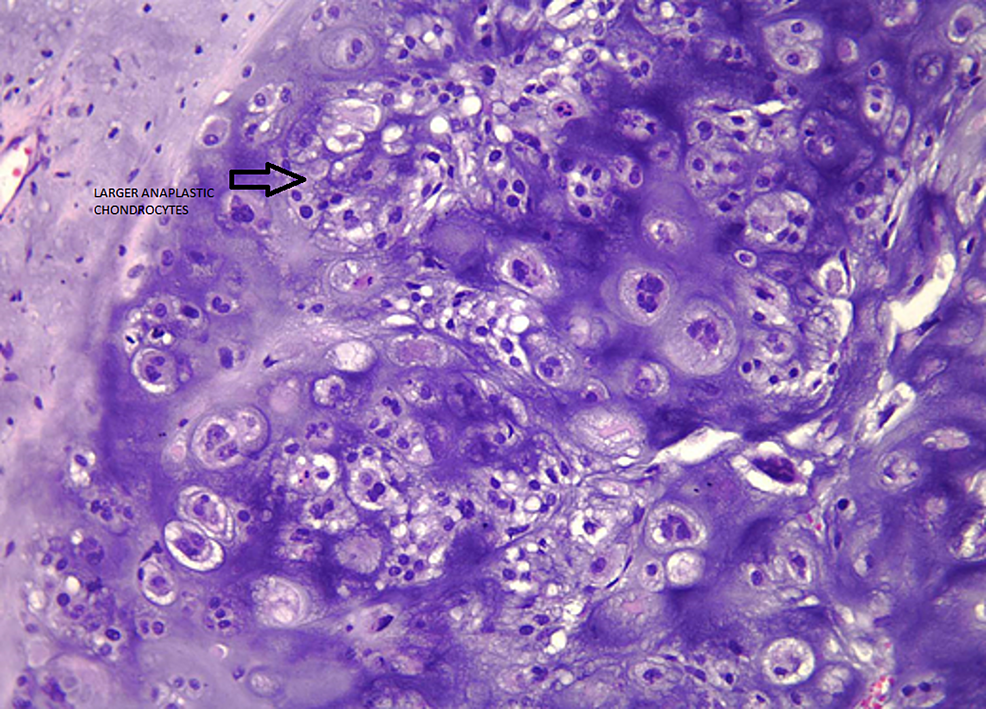 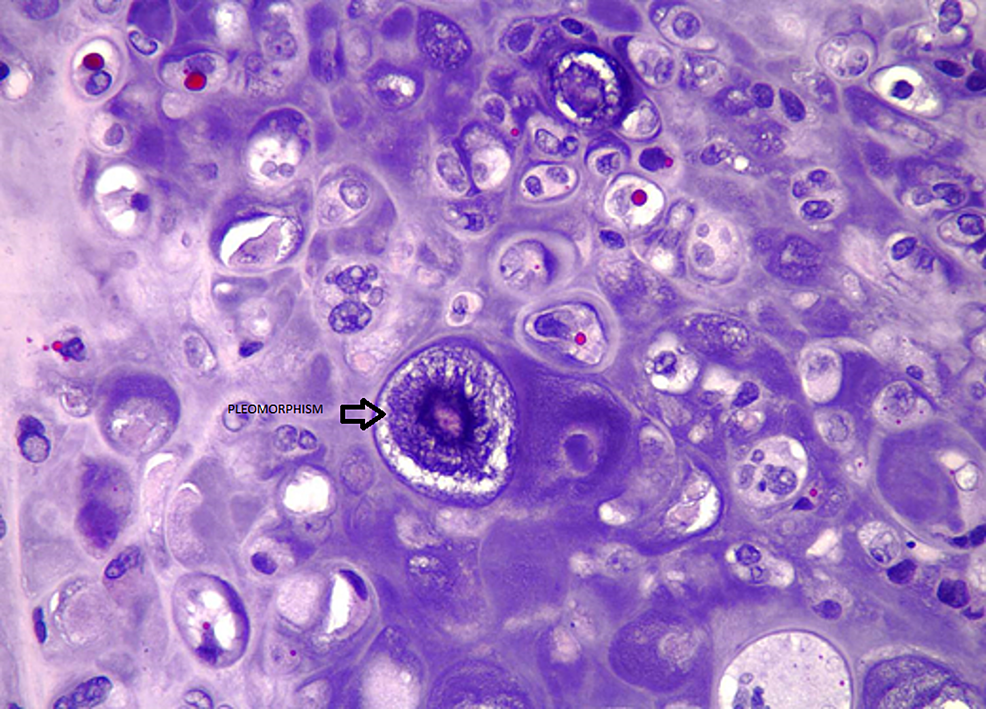 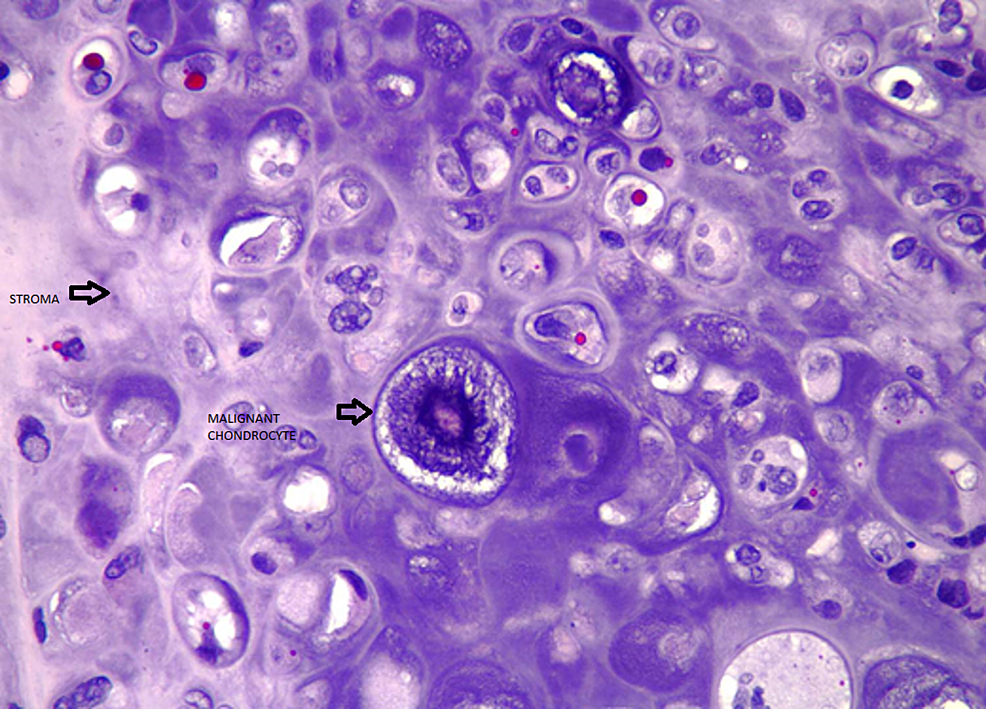 After surgical resection, Gliadel local chemotherapy was used. Her weakness improved after surgery. On delayed follow-up, her hyperglycemia and hypercalcemia improved as well.

Chondrosarcomas account for close to one quarter of all primary malignant bone tumors. These lesions typically present in older males. They are located in the femur, tibia, or humerus 50% of the time. Less common locations are the pelvis and spine. They can present as a painful lump or as a pathological fracture of weakened bone.

On imaging these lesions can be a lytic pattern or deep endosteal scalloping and soft-tissue extension. Some have high T2 signal indicative of high-water content and endochondral ossification.

Table 1: Chondrosarcoma of the brain.

Various presentations of primary and metastatic disease from intracranial sources are found in the neurosurgical literature. There have been cases reported on chondrosarcoma causing hyperostosis of the overlying cranium [15]. There have also been reported cases of primary meningeal chondrosarcoma in the literature [15, 16]. In terms of lesion diagnosis, there has been a report of using lamellar inclusions in the rough endoplasmic reticulum as a marker for diagnosis. Other associated diagnostic markers include immunohistochemical positivity for S-100 protein, vimentin, and collagen type II [17].

Accepted treatment methods for primary lesions have usually included total surgical resection; however, there is currently no consensus on adjuvant therapy. Cases utilizing brachytherapy and external beam radiation have been reported with some success [7,16]. Magnetic resonance imaging has come to be accepted as the gold standard in the diagnosis of intracerebral metastatic disease, including chondrosarcoma, with perfusion imaging being the most recent advance in this diagnostic paradigm [13].

A review of papers studying the rationale for using BCNU wafers in the treatment of intracranial metastatic disease reveals that not only are the results promising but also that the mechanism of delivering local chemotherapy directly at the tumor site and obviating the blood-brain barrier can lead to higher local effective concentrations of the drug without systemic toxicity [6, 9]. Randomized, prospective trials are still needed to further elucidate the utility of surgery versus radiosurgery versus local delivery of chemotherapeutic agents to in an effort to bypass the blood-brain barrier.

Hypercalcemia is a common complication of malignancy and occurs in up to 30% of cancer patients. Mild cases of hypercalcemia can cause non-specific symptoms such as lethargy, nausea, and abdominal pain, whereas severe cases can lead to severe dehydration and neurological impairment such as coma. There are several mechanisms that result in hypercalcemia in malignancy. Secretion of parathyroid-related peptide (PTH-rp) by malignant cells, which induces renal calcium absorption, accounts for 80% of cases. Excess osteolytic activity with bone resorption accounts for 30% of cases, and is usually seen in extensive skeletal tumor burden. Increased production of 1,25-dihydroxyvitamin D, which enhances intestinal calcium absorption as well as osteolytic bone resorption, accounts for 1% of cases of malignancy-related hypercalcemia [18].

Hyperglycemia in cancer patients can be attributed to a few proposed mechanisms aside from a known diagnosis of diabetes mellitus. Steroids, which are used in a number of malignancy-related settings such as for cerebral edema from brain metastasis or in several chemotherapy regimens, are a common cause of drug-induced hyperglycemia. In the hospital setting, more than 50% of patients receiving high-dose steroids experience at least one episode of hyperglycemia [19]. Another mechanism for elevated serum glucose levels in critically ill patients is stress-induced hyperglycemia, which results from excess release of counterregulatory hormones, including epinephrine, cortisol, and glucagon. Patient-associated risk factors that have been described in developing both steroid-induced and stress-induced hyperglycemia include older age and higher body mass index [19,20].

Chondrosarcomatous brain tumors are rare with few primary cases reported in the literature. We report a case of a metastatic intracranial metastasis from an extracranial source, which has not been previously reported. Our case demonstration should help to clarify adjuvant treatment options. Treatment plans should take into account histopathological characteristics of the tumor along with patient functional status, endocrine status, and ability to tolerate adjuvant treatment side-effects. Future studies should address neurocognitive outcomes in addition to recurrence and survival rates with pathological correlation when comparing different treatment algorithms.

Figure 1: Preoperative and postoperative magnetic resonance imaging of the brain revealing a ring-enhancing mass in the left parieto-occipital lobe.

Table 1: Chondrosarcoma of the brain.