Lumbar puncture (LP) is done daily for both spinal anesthesia and emergency cases for cerebrospinal fluid (CSF) analysis. Subdural hemorrhage (SDH) is a rare but severe complication following diagnostic LP, which could be potentially fatal, and early diagnosis may be life-saving. We present a 28-year-old female patient who presented to our emergency department with a headache, fever, and vomiting, with normal initial laboratory and imaging. Diagnostic lumbar puncture was done to exclude central nervous system infection. After CSF results and cultures were negative, and nasal influenza B detected, medication was started and she was discharged home. Three days post-procedure, she was complaining of a severe, persistent headache and a head computed tomography (CT) was done, which revealed acute SDH. Extensive workup searching for the cause of SDH was negative, and with a stationary course of SDH, she has discharged home again with a diagnosis of SDH post LP complication. In conclusion, a headache post LP is common and usually benign and self-limited. Severe persistent headache that is not positional and doesn't respond to analgesics with caffeine should be considered a red flag after LP and should be investigated carefully for other possibilities such as SDH.

Lumbar puncture (LP) is a frequent procedure in clinical practice. It is done daily either for the administration of spinal anesthesia or for obtaining cerebrospinal fluid (CSF) [1]. The common complications of LP are pain at the local site and post LP headache. Serious complications, such as subdural hemorrhage (SDH), brain stem herniation, and central nervous system (CNS) infection, could happen but, fortunately, it is infrequent [2]. The true incidence of SDH following LP is unknown because not all cases are reported and probably treated without investigation [3]. If any patient develops a severe headache after LP, which is not relieved in a supine posture with adequate hydration, SDH should be suspected, and the patient should be investigated and treated accordingly [4]. We report on a case of an uncommon SDH complication of an LP in a patient without any known risk factors for that.

Figure 1: A, B: Non-contrast axial computed tomography brain on admission with no abnormalities

Moreover, rapid strep, dengue fever, and swine flu (H1N1) tests were negative, so a nasal swab and blood sample were sent for culture. A decision to perform LP to search for central nervous system (CNS) infection was made and written consent obtained from the patient. The procedure was done in the left lateral position by a senior anesthesiologist through dural puncture at the L3-4 vertebral level using a 22-gauge spinal needle. CSF opening pressure was 11 cmH2O. The fluid was clear, and three samples, each of 3 ml, were obtained and sent for the lab. CSF investigations were within normal ranges, including protein 0.19 gm/l, glucose 4.2 mmol/l, and white blood cell (WBC) count was 1/mm3. Moreover, gram staining showed no organism and culture pending. Over the 24 hours following the procedure, she was complaining of pain in the procedure site and post-LP positional headache, which responded to analgesics, caffeine, and proper hydration. On hospital day two, the nasal swab was positive for influenza B, so Tamiflu was started with an improvement of general condition. On day three, blood and CSF cultures were negative; the patient was afebrile and her headache improved, so she was discharged home with adequate pain killers and Tamiflu.

Two days later, the patient came back to the emergency department (ED) complaining of drowsiness, a worse bilateral front-temporal headache not responding to analgesics and exacerbated by lying down and movement; moreover, it was associated with blurred vision, nausea, and vomiting. A new CT brain was done that revealed an acute left temporal SDH, extending within the tentorium-cerebelli with little mass effect (Figure 2A).

The patient was admitted for close monitoring and symptomatic treatment. She denied any head trauma after discharge; extensive hematological workup for any bleeding tendency was negative. Magnetic resonance imaging (MRI) brain and magnetic resonance venography (MRV) with gadolinium (Figure 3A) was done and revealed the same hematoma and patent venous system without any signs of sinus thrombosis. Cerebral CT angiography (CTA) with contrast was done and didn't show any vascular malformation or aneurysmal dilatation (Figure 3B). 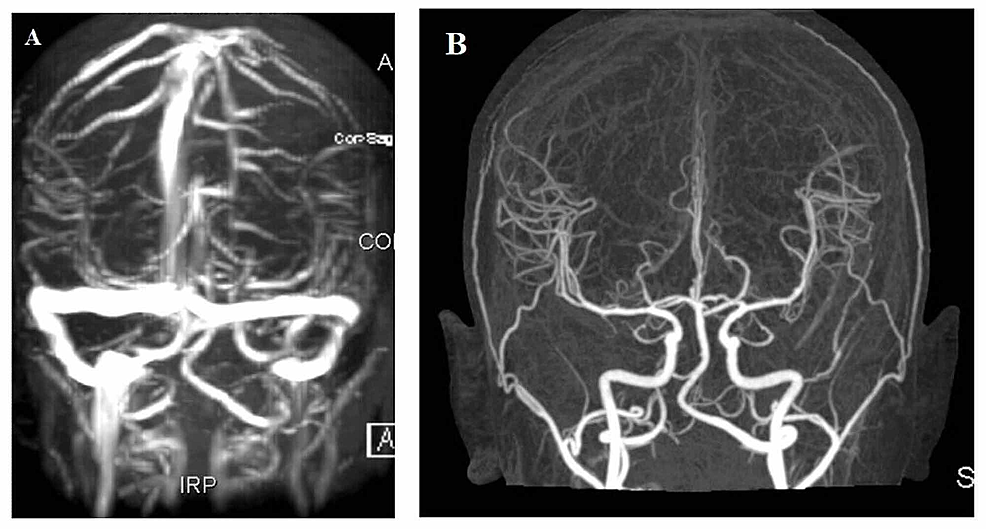 Figure 3: (A) Magnetic resonance venography with gadolinium contrast showed no evidence for dural venous sinus thrombosis, (B) CT cerebral angiography showed arteries are patent with no evidence for any aneurysms or arteriovenous malformation

Neurosurgical consultation recommended conservative medical treatment and observation. She remained neurologically stable and her headache and general condition mildly improved. Repeat CT brain (Figure 2B) showed no change in SDH size and decreased hemorrhage size of tentorium-cerebelli on day five (Figure 2C). The clinical course was good, and the patient's headache gradually improved during the hospital course. She was discharged home on hospital day eight with analgesics and antiemetics with a diagnosis of post-LP SDH complication. She asked to follow up at the outpatient clinic and repeated CT brain after three weeks revealed decreased SDH size and entirely resolved SDH after two months.

SDH occurring after LP is extremely rare. Only sporadic case reports and a few small case series have described this condition [5-6]. We report on a case that experienced SDH post-diagnostic LP. The case readmitted with a headache, which is very common post-LP, however, post-lumbar puncture headache (PLPH) has a more benign, regressive course and responds well to analgesic and caffeine. The mechanism for PLPH is not fully understood, but continued CSF leakage, leading to a reduction in CSF pressure, is often blamed [7-8]. The international headache society (IHS) has developed a list of criteria to help differentiate PDPH from other, more serious, complications of dural puncture like SDH (Table 1) [9].

Although our patient headache met PLPH criteria and independent risk factors like female gender and middle age, there were red flags, for example, it was exacerbated by lying down, drowsiness, and non-responsiveness to fluids and medications. There have been other symptoms and signs considered red flags reported to be associated with SDH after LP at the time of diagnosis (Table 2) [10].

The development of SDH following LP is a rare but severe complication that can be fatal if left untreated (6). The true incidence of SDH following spinal anesthesia is not clear and mostly under-reported due to misdiagnosis as PLPH. However, one study estimated its occurrence as 1:220,000 [11]. Risk factors for the development of SDH after LP include large spinal needle size, multiple LPs, and large dural hole. Other risk factors in special populations are pregnancy, dehydration, use of anticoagulants, cerebral vascular abnormalities, and brain atrophy [4]. The primary pathophysiology of this complication is unknown; however, there are some data that it is the same as PLPH, with some minor differences. Intracranial hypotension allows a caudal shift of the brain, with traction on the arachnoid mater and dural veins; this leads to lesions of the blood vessels and could result in blood extravasations and formation of SDH [3,12].

We report on a case that developed cranial SDH following diagnostic LP, which is a rare, yet serious, complication. Patients developing PDPH that is unrelieved by conservative measures, as well as a change of PDPH from postural to non-postural or an increase with lying down, require careful follow-up for the early diagnosis and management of possible SDH.

© Copyright 2020
Abdullah et al. This is an open access article distributed under the terms of the Creative Commons Attribution License CC-BY 4.0., which permits unrestricted use, distribution, and reproduction in any medium, provided the original author and source are credited.

Figure 1: A, B: Non-contrast axial computed tomography brain on admission with no abnormalities

Figure 3: (A) Magnetic resonance venography with gadolinium contrast showed no evidence for dural venous sinus thrombosis, (B) CT cerebral angiography showed arteries are patent with no evidence for any aneurysms or arteriovenous malformation