Hereditary hemochromatosis is a syndrome of dysregulated iron homeostasis resulting in the excessive deposition of iron. Hemochromatosis causes pulmonary, pancreatic, and hepatic dysfunction, all of which are risk factors for anemia in the general population. Conversely, iron overload states are thought to predispose to polycythemia. The effect of the homozygosity and heterozygosity of hereditary hemochromatosis-associated genes on hemoglobin levels has not been sufficiently studied.

We conducted a retrospective cohort study at West Virginia University of all patients who underwent HFE gene analysis and carried the diagnosis of hemochromatosis. Charts were reviewed to identify relevant variables and the patients’ clinical course.

Concurrent malignancy and the presence of chronic renal insufficiency were significantly associated with anemia in both the univariate and multivariate analysis (p-values < 0.001). Patients with homozygosity for C282Y were more likely to receive phlebotomy as compared to other patients. Serum ferritin was not associated with anemia or polycythemia on multivariate analyses (p-values 0.197 and 0.105, respectively).

Multiple genes have been linked with hereditary hemochromatosis, with C282Y homozygosity being the most common genotype associated (80%-85%) [3]. Other genes commonly identified with disease activity include H63D and S65C, among others. Although typically less aggressive, these genes have also demonstrated significant disease activity when paired with C282Y. Phenotypic expression has been reported to occur in approximately 70% of C282Y homozygotes, with fewer than 10% developing severe iron overload and the ensuing clinical manifestations [4-5]. Therapeutic phlebotomy remains the mainstay of treatment, with or without the use of chelating agents.

A retrospective chart review was conducted for all patients who carried the diagnosis of hemochromatosis using relevant diagnosis codes from the electronic patient database at West Virginia University Medicine (WVUM). All patients who had undergone human homeostatic iron regulator (HFE) gene testing between the years 2010 and 2019 were identified, and their medical charts were reviewed. Patients who carried the clinical diagnosis of hemochromatosis, confirmed to be positive on HFE gene testing, were included. Patients were excluded if they were less than 18 years of age or if no clinical follow-up was available. A total of 213 patients were included in the study and final analysis.

HFE genetic testing is performed by an in-house laboratory at our institution. Testing is conducted for C282Y, H63D, and S65C alleles only. Serum hemoglobin, hematocrit, and iron profiles, including transferrin, total iron-binding capacity (TIBC), and ferritin, are also measured in an in-hospital laboratory 'University Medial Laboratories' that is fully accredited by the College of American Pathologists, The Joint Commission, and the American Association of Blood Banks. The hemoglobin values were reported in gram per deciliter, TIBC in micrograms per deciliter while the serum ferritin levels were reported in nanograms per milliliter.

Our study was reviewed and approved by the Institutional Review Board (IRB) at West Virginia University prior to initiation. A waiver of informed consent was granted for review of medical records.

Statistical analysis was performed using statistical software R (2019, version 3.6.2) [9]. Rates of anemia and polycythemia were compared between different genotypic variants. Univariate analysis was conducted using t-tests and chi-square tests for continuous and categorical variables, respectively. Variables were then incorporated into a multivariate logistic regression model to assess for independent associations and control for confounders. P-values less than 0.05 were considered significant for the purposes of this study.

Table 1: Characteristics of the study population

The prevalence of cirrhosis in our study population was 16.8% and 20.1% of patients had a concurrent diagnosis of malignancy. Anticoagulant use was present in 6.5% of patients and 13.1% had been diagnosed with chronic renal insufficiency. One hundred and sixteen patients (54.46% of the patient population) were receiving therapeutic phlebotomies. 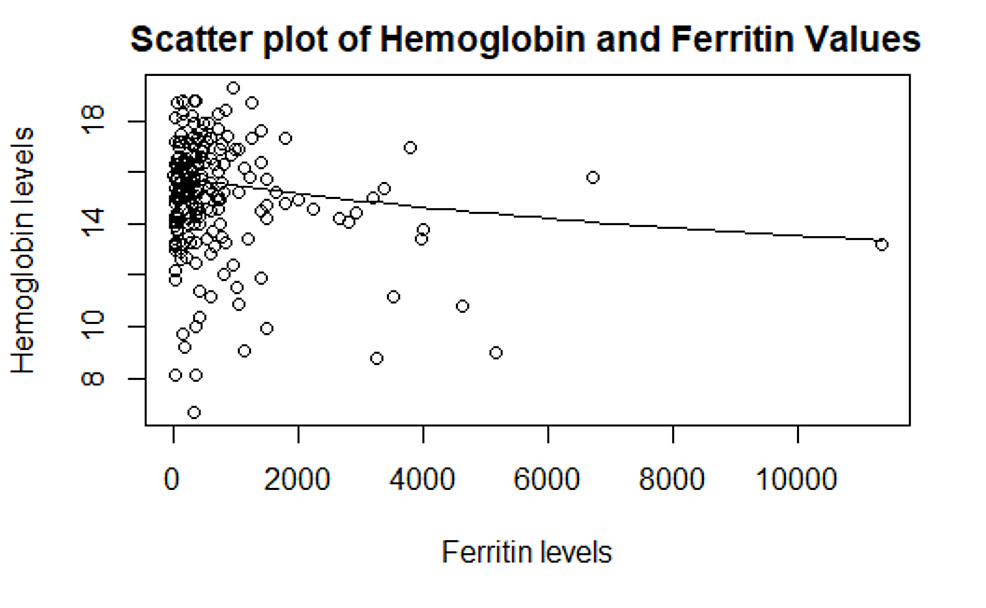 Iron homeostasis involves a complex interplay of multiple cellular pathways mediated by hepcidin, a peptide synthesized by the liver [10]. When bound to ferroportin, the transmembrane iron-transport receptor, hepcidin activates signaling pathways that result in endocytosis and degradation of the iron-transport receptor. As a result, the intracellular uptake of iron is inhibited. Hepcidin synthesis is regulated by levels of serum and stored iron through sophisticated feedback mechanisms. In hereditary hemochromatosis, genetic mutations involving the hepcidin gene results in elevated serum iron and ferritin levels as a consequence of dysregulated iron homeostasis.

Polycythemia has been previously explored in various studies in the context of hereditary hemochromatosis [6,11]. Polycythemia in this setting is thought to be a consequence of elevated transferrin saturation levels, resulting in increased iron uptake by erythroid precursor cells. Intracellular iron is then utilized by these precursor cells to increase red blood cell synthesis. Previous studies have also suggested that utilization of non-transferrin bound iron may occur by erythroid precursor cells through transferrin-independent pathways [12]. Heme synthesis, in normal erythroid cells, is regulated through the feedback inhibition of aminolevulinic acid (ALA) synthase and ALA dehydrase, among other proposed mechanisms [13]. There is no current literature describing the utilization of and the mechanisms by which iron metabolism differs in hereditary hemochromatosis, therefore, it is certainly possible that significant differences may be present from normal erythroid cells.

Although an elevated hemoglobin value is, at times, considered to be a feature of hereditary hemochromatosis, we found a mean hemoglobin value of 15.0 mg/dL in our patient population. Only one-fourth of study participants met the WHO cutoff for polycythemia, even in the setting of exceedingly elevated serum ferritin levels. The common misassociation of hemochromatosis with polycythemia may lead to lower suspicion for hemochromatosis by providers in patients with anemia or normal hemoglobin, thus leading to missed diagnoses [14]. Our data, as well as the limited current available data on hemoglobin parameters, as discussed below, does not support a high prevalence of polycythemia in these individuals.

Limited published data on blood erythrocyte parameters in patients with hereditary hemochromatosis is available in the current literature. Beutler et al. report only a slightly increased mean hemoglobin level in patients with hereditary hemochromatosis screened in the ambulatory setting [10]. Asif et al. observed a median hemoglobin level of 15.5 mg/dL in their homozygous C282Y population, which is closely reflective of the hemoglobin values reported by our study [11]. Another study by Barton et al. reports that only patients with C282Y homozygosity (and not other genotypic variants) have higher mean hemoglobin values when compared to healthy matched controls; the mean hemoglobin levels of their untreated homozygous C282Y probands was reported to be 15.0 mg/dL (±1.3), which also closely matches that reported in our study [6]. The percentage of participants meeting the criteria for polycythemia was not discussed.

It can be deduced that although it may offer a degree of relative protection against anemia, hereditary hemochromatosis does not present with polycythemia in a majority of patients. We did not find any association between ferritin levels and polycythemia or anemia in our cohorts, which may suggest that the iron overload state in these patients may not be reflected by changes in the hemoglobin profile.

Our study is limited by its retrospective nature. Only the C282Y, H63D, and S65C genes were reported at our facility. However, with a larger sample size than the previous limited data on the subject, and after controlling for all possible confounders, we have found that patients with hereditary hemochromatosis mostly present with normal hemoglobin values, with a low prevalence of anemia or polycythemia.

Despite the high prevalence of medical comorbidities that are known risk factors for the development of anemia in the general population, very few study participants with hereditary hemochromatosis developed anemia. Female patients were relatively protected against the development of polycythemia, affecting only one-fourth of all patients. Serum ferritin levels were not associated with anemia or polycythemia, with most patients’ serum hemoglobin falling within normal limits.

Table 1: Characteristics of the study population