Published via the California Institute of Behavioral Neurosciences & Psychology Channel.

Obstructive sleep apnea (OSA) is defined as episodes of hypopnea or apnea, which leads to a partial or complete block of airways. Hypertension, on the other hand, is defined as an increase in systemic arterial blood pressure to a certain threshold. OSA and hypertension share many common factors in pathophysiology, such as gender, obesity, unhealthy lifestyle, impaired quality of sleep, renin-angiotensin system, and increased fluid distribution. In order to manage our patients effectively, we need to explore further the correlation between the two conditions.

Obstructive sleep apnea (OSA) is defined as episodes of obstruction of the upper airway during sleep, with a minimum prerequisite frequency of five events per hour and lasting for at least 10 seconds. It can lead to decreased breathing or even complete cessation of breathing causing temporarily low oxygen and high carbon dioxide in the body [1,2]. There are several types of sleep apnea, but the most common is OSA. This type of apnea occurs when throat muscles intermittently relax and block the airway during sleep. A noticeable sign of OSA is snoring. Sleep apnea has a strong association with cardiovascular diseases, diabetes, and stroke [3]. It is increasing in developed countries with an increase in the obesity rate. It is known to affect 24%-26% of men and 17%-28% of women between 30 and 70 years of age [4].

Hypertension (HTN) is defined as the elevation of arterial blood pressure (BP) above a certain value, systolic of equal to or greater than 140 mmHg and diastolic of equal to or greater than 90 mmHg [1]. BP is the force that the blood exerts against the walls of the blood vessels. It can be classified as primary or secondary HTN depending upon the cause. Obesity, older age, high salt diet, diabetes, and sedentary lifestyle kidney diseases are the risk factors. There are various stages of HTN. The most initial step in the treatment of HTN is lifestyle modification followed by medications of different classes that help in lowering BP. OSA is more common in patients with HTN than in the general population, and many patients with OSA may have HTN as well [5]. OSA and HTN are interrelated diseases, and approximately 75% of treatment-resistant hypertension (TRH) patients have an underlying OSA [6].

An increase in the development of HTN in the general population requires an in-depth analysis of the association of HTN with other possible co-existing conditions, such as sleep apnea, obesity, and hypercholesterolemia. A detailed analysis of the association can help us improve the investigations and treatment protocols of the patients. It can further help us to prevent the development of these closely interrelated conditions.

Association between HTN and sleep apnea 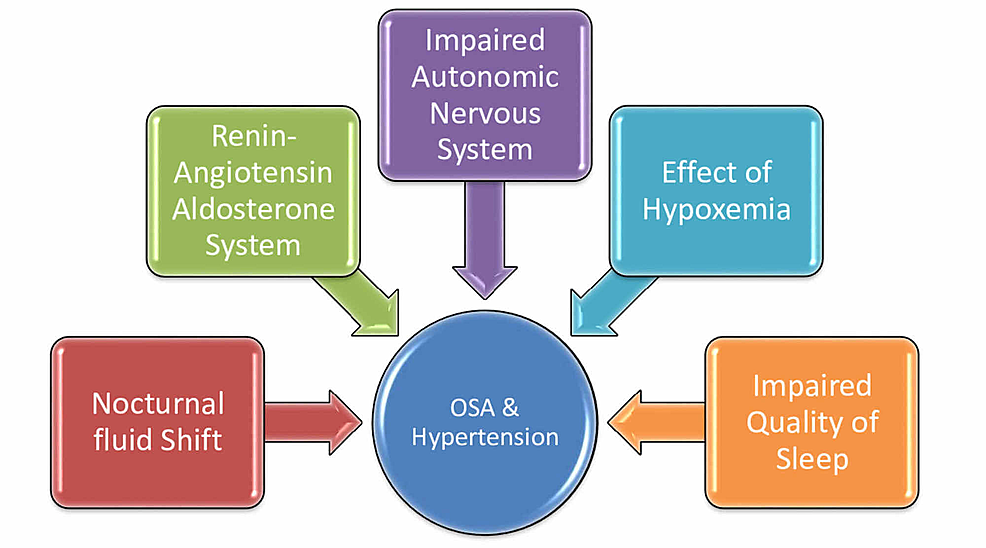 At night, the fluid from the lower limbs is redistributed to the neck, which causes further obstruction and rise in BP and episodes of hypopnea or hypoxia in patients with HTN and OSA. Furthermore, the increased levels of aldosterone enhance fluid retention, thus increasing the upper airway obstruction [7].

Renin-angiotensin-aldosterone is a hormonal system that regulates BP, fluid, and electrolyte balance in the body. Renin produced from the kidneys, along with enzymes, causes the conversion of angiotensinogen to angiotensin I, which is further converted to angiotensin II. Angiotensin II is a strong vasoconstrictive peptide that causes vasoconstriction and increases the BP. The recurrent episodes of obstruction of the upper airway lead to hypoxia, which in turn leads to increased activation of renin. A 2016 meta-analysis of 13 studies revealed that patients with OSA have higher levels of angiotensin II and aldosterone, especially in cases with co-existing HTN [8]. Excess levels of aldosterone cause edema of nasopharyngeal tissues and upper airways, which in turn leads to airway obstruction and further progression of OSA [9]. CPAP therapy is found to be associated with downregulation of renal renin-angiotensin system activity [10].

OSA is one of the most important causes of impaired sleep quality [11]. Impaired sleep or deficiency of sleep is also a potential contributor to HTN. A longitudinal study was conducted, and it was concluded that chronic insomniacs with short sleep duration were at increased risk of incident HTN, but this effect was largely explained by controlling obesity, whereas many other studies have shown positive correlations between sleep deprivation and various adverse cardiovascular risk factors: arterial stiffness, endothelial dysfunction, sympathetic activity, non-dipping nocturnal BP pattern, and insulin insensitivity [12-16].

The sympathetic nervous system is activated and parasympathetic nervous system is deactivated by changes in the levels of CO2 and O2; the increase in CO2 and decrease in O2 are caused by the events of apnea [17]. Increased catecholamine levels along with the changes in the autonomic nervous system continue during daytime and can cause the development of HTN [18]. During postapneic hyperventilation, the increase in BP can go as high as 240/30 mmHg [19,20]. Studies on animals demonstrated that the rise in BP, which is associated with OSA events, can be undermined by renal denervation [21].

It has been observed that OSA correlates with an increased burden of systemic inflammation and higher concentrations of high-sensitive C-reactive protein (hs-CRP), interleukin (IL)-1, IL-8, IL-6, tumor necrosis factor-alpha (TNF-α), Rantes, and sICAM [22]. The oxidative stress caused as a result of OSA acts like an ischemic reperfusion injury, leading to the release of reactive oxygen species [23,24]. This overall increase in oxidative stress leads to an increase in cardiovascular risk. It has been suggested by studies in a murine model that atorvastatin, which is known to reduce inflammation, prevented various adverse cardiovascular processes related to intermittent hypoxia [25].

Effect of age on pathophysiology of OSA

A number of studies have been reported that the effects of OSA on cardiovascular conditions such as atrial fibrillation and HTN are more prominent in younger than in older older individuals. This hypothesis that OSA affects younger versus older patients differently was assessed in a study of changes in the renal vascular resistance index but no strong differences between the age categories were found [26].

The initial steps in the management are taken to define the baseline of the patient profile, and to check for the end-organ damage for which the patient will undergo physical examination BP monitoring [27].

Lifestyle modification is the first and initial treatment. Obesity has an independent link with HTN and OSA, so the patients can be encouraged to adopt lifestyle modifications like weight loss. In a randomized control trial, to assess the effect of CPAP and weight reduction on OSA patients were divided into groups having CPAP treatment alone, weight reduction or CPAP, and weight reduction together [28]. A reduction in CRP, insulin, and triglyceride levels was seen in the group with both interventions; however, no such reduction in CRP level was noted in patients taking CPAP alone. Reductions in insulin resistance and triglyceride levels were greater in the combined intervention groups than in the group receiving CPAP only.

The main treatment therapy for OSA is CPAP. The adherence is still suboptimal although numerous developments in machine dynamics have been made, which includes quieter pumps, softer masks, and improved portability. Adherence to CPAP therapy remains the main problem as it low (30%-60%). Since the nature of HTN is multifactorial, the effect of CPAP is yet to be established. In patients with minimal symptoms, CPAP has a neutral effect on BP but those with resistant HTN, CPAP decreases the systolic BP by 5‐7 mmHg [29].

Upper airway surgeries, such as tonsillectomy and uvulopalatopharyngoplasty (UPPP), are also being considered as treatment options for OSA surgery [4]. In mild to moderate OSA, oral appliances can be recommended as an alternative treatment to CPAP. A meta-analysis of seven studies (399 OSA patients involved) found that treatment with oral appliances was more beneficial for BP reduction than CPAP therapy. The average drop in the systolic BP and diastolic BP was 2.7 and 2.7 mmHg, respectively [30].

As a traditional review article summarizes the already published studies, not all the possible new facts and analysis were included. The search was limited to studies that 10 years older, primarily focusing on the study of the association between the two conditions.

The apneic episodes in OSA lead to an increase in BP, which further exposes the patient to cardiovascular and cerebrovascular risks. Thus, identification of the co-existent conditions is important to provide timely and proper treatment to patients. Due to the increasing number of patients with OSA, more research and studies are required to explore the co-relation of OSA with HTN as well as other conditions. In this review article, we have tried to discuss a few of the well-related and studied factors that co-relate OSA and HTN. Factors such as obesity and hyperlipidemia require further research and investigation as these factors can also be contributing to either of the two conditions .

© Copyright 2020
Bangash et al. This is an open access article distributed under the terms of the Creative Commons Attribution License CC-BY 4.0., which permits unrestricted use, distribution, and reproduction in any medium, provided the original author and source are credited.