A 52-year-old female with no significant past medical history presented with complaints of multiple yellowish-white swelling over fingertips for the last two years (swellings were bilateral involving multiple fingers). She had no other systemic complaints. Her family history and social history was unremarkable. Clinical examination revealed multiple, firm to hard, white to yellow papulonodular swellings on the finger pad of thumb, index and ring finger in right hand, little and middle finger of left hand (Figure 1A, 1B). With this clinical picture differential diagnosis of gouty tophi and calcinosis cutis were kept. On further evaluation, her radiograph of bilateral hand revealed multiple, heterogeneous soft tissue calcification in finger pads suggestive of calcinosis cutis (Figure 2). She was investigated further to find the cause and her liver function, renal function tests, serum electrolytes, C-reactive protein, and erythrocyte sedimentation rate were within normal limit. Serum calcium (9.8 mg/dl), magnesium, phosphate, uric acid, vitamin D3, thyroid function and parathyroid hormone (58 ng/ml, normal 10-75 ng/ml) levels were within the normal range. In addition, her 24-hr urinary calcium was also within the normal range. The workup for connective tissue disorders was negative (Antinuclear antibodies, anti-Scl-70, anti-Ro, anti-La, anti-Jo-1 antibodies were negative). Our patient refused skin biopsy. After ruling out metabolic causes, autoimmune disorders and malignancy, we made the final diagnosis of idiopathic calcinosis cutis. The patient was prescribed oral diltiazem (60 mg, 1 mg/kg) and was followed for the next three months. Though her lesions were not progressive, there was no significant improvement after diltiazem therapy.

Figure 1: (A, B) Showing grouped white to yellowish papules on the finger pads (black arrow) 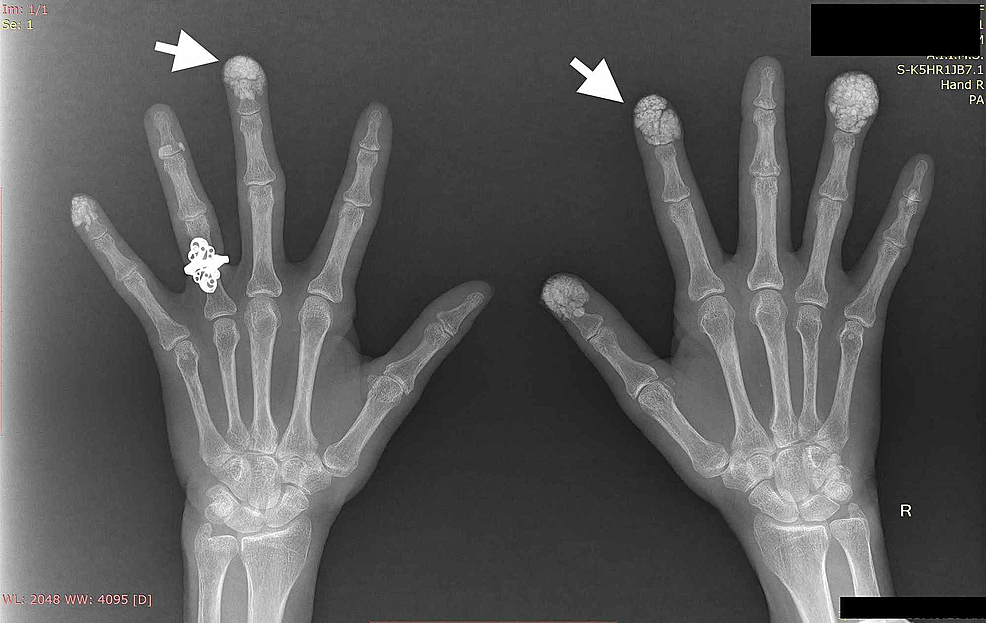 Idiopathic calcinosis cutis is rarely reported in the literature [5-7]. It occurs without any tissue damage or abnormal calcium or phosphate metabolism. There are three subtypes of idiopathic calcinosis described in the literature; scrotal calcinosis, familial tumoral calcinosis and subepidermal calcified nodules. The underlying pathophysiology behind the abnormal deposition of calcium salts in skin is unclear. It has been hypothesized that abnormal metabolism of gamma carboxy glutamic acid (GIa) is responsible for abnormal calcium deposition in subcutaneous tissues, with increased production of GIa is attributed to soft tissue calcification [8]. A mutation in the gamma-glutamyl carboxylase gene is also reported to cause aberrant calcification in dermal fibroblast [9].

Treatment of calcinosis cutis is challenging. The limited role of warfarin, diltiazem, bisphosphonates, probenecid, colchicine, aluminium and magnesium antacids has been described in the literature. Previous reports have conflicting results of diltiazem in idiopathic calcinosis cutis with some reports showing significant resolution with long-term therapy [10,11]. It has been postulated that being a calcium channel blocker, diltiazem inhibits the calcium accumulation into the cells. The dose of diltiazem was varied from 1 mg/kg to 3 mg/kg (up to 330 mg) in previous cases. We started from 60 mg and increased the dose up to 200 mg without any significant result. The indications for surgical removal are ulceration, infection, pain and functional impairment. Our patient had none of these complications, so we decided to observe the patient with close follow-up.

In conclusion, our report illustrates the rare presentation of calcinosis cutis. Extensive evaluation to rule out any potential abnormalities of calcium and phosphate metabolism, connective tissue disorders, renal dysfunction, and malignancy should be done. Though the role of medical management is limited in idiopathic calcinosis cutis, the possibility of correctable/secondary causes should be sought in patients presented with abnormal soft tissue calcification. There are recent reports which showed promising results with diltiazem therapy however our patient did not show any improvement. Further studies will be required to establish the role of calcium channel blockers in the treatment of calcinosis cutis.

© Copyright 2020
Meena et al. This is an open access article distributed under the terms of the Creative Commons Attribution License CC-BY 4.0., which permits unrestricted use, distribution, and reproduction in any medium, provided the original author and source are credited.

Figure 1: (A, B) Showing grouped white to yellowish papules on the finger pads (black arrow)

Recurrence of Pheochromocytoma With Metastases After Resection of Primary Tumor