Although choanal atresia (CA) was first described 250 years ago, its description and understanding remain incomplete, as is the distinction between unilateral and bilateral CA. Among the surgical techniques introduced to manage this condition are intranasal Hegar’s dilator (IHD) and transnasal endoscopic excision (TNEE).

This study retrospectively evaluated the outcomes and effectiveness of IHD and TNEE in the treatment of patients with CA, including differences in the incidence of re-stenosis with these techniques.

Patients diagnosed with CA who underwent surgical interventions in the Otolaryngology Department of Al-Noor Specialist Hospital, Makkah, Saudi Arabia, between 1997 and 2017 were analyzed. Postoperative outcomes including re-stenosis rates were compared in patients who underwent IHD and TNEE. Factors associated with patient outcomes were analyzed, including ages at diagnosis and surgery, nationality, gender, type of atresia (unilateral/bilateral and bony/membranous/mixed), surgical intervention (IHD or TNEE), and re-stenosis and need for revision surgery after IHD and TNEE.

The outcomes in patients with CA treated with IHD and TNEE are comparable. Rates of re-stenosis and need for revision surgery do not differ significantly in patients treated with these surgical approaches.

Choanal atresia (CA), a rare congenital disfigurement of the nasal cavity first described in the mid-18th century, is generally characterized by the absolute obliteration of the posterior nasal choanae, which interferes with respiratory airflow from the nose to the rhinopharynx [1,2]. CA is also characterized by the medialization of the lateral pterygoid plate, which forms the lateral part of this obstruction [3]. Enlargement of the vomer bone is responsible for the obstruction of the medial part. In patients with bilateral CA, the nasopharyngeal airway is completely obstructed on the affected side. In most patients, this obstruction is bony, but it may also be membranous or a combination of both. In its initial phases, CA may manifest as a troubling nasal airway obstruction or rhinorrhea, typical of unilateral CA, although obstruction may be life-threatening [4].

Patients diagnosed with bilateral CA at birth usually present with extreme obstruction, generally manifesting as cyclical cyanosis that is exacerbated when the patient cries [5]. Difficulties passing a suction catheter through a patient’s nasal passages should prompt a thorough diagnostic evaluation of the nasopharyngeal anatomy. Patients can be diagnosed by fiber-optic endoscopy followed, when needed, by computed tomography [6]. A McGovern nipple should be employed to sustain the patient’s respiratory airways and to ease feeding. Surgery is the treatment of choice, with intranasal Hegar’s dilator (IHD) and transnasal endoscopic excision (TNEE) being two of the surgical methods currently used to treat CA. Depending on the severity of the obstruction, surgical intervention may be delayed in patients with unilateral CA until the nasal passages become larger, enhancing the likelihood of successful surgical repair [7].

CA has been estimated to occur in 1 of 5,000-7,000 births, with a 2:1 female predominance [8]. Obstructions are mixed bony-membranous type in 70% of patients and purely bony type in others [9]. CA is unilateral in two-thirds of patients, affecting the right nasal cavity in 71% of those with unilateral CA. The unilateral form may remain undiagnosed for years, whereas bilateral CA, which is generally characterized by severe respiratory distress with intermittent cyanosis exacerbated by crying, is usually diagnosed soon after birth [10]. Although several studies have described the manifestations and management of CA, most of these studies were case series without adequate standardization, making comparisons difficult [2]. Questions remain regarding optimal treatment, including the time of surgery, access to the surgical field, surgical procedure, pharmacological treatment before and after surgery, need for stent implantation, and stent maintenance.

To our knowledge, no randomized clinical trials to date have compared the surgical techniques currently employed to treat and manage CA [11]. Thus, the relative advantages and disadvantages of these procedures have not been definitively determined. Moreover, most studies do not differentiate between patients presenting with unilateral and bilateral CA, with few case series separating these two patient categories [4,6,12].

This study is a retrospective evaluation of the outcomes and effectiveness of IHD and TNEE in patients with CA who were treated at Al-Noor Specialist Hospital, Makkah, Saudi Arabia, over a 20-year period between 1997 and 2017. This study also analyzed the difference in re-stenosis rates in patients who underwent surgery using the two techniques.

The medical files of patients who were diagnosed with CA and managed in the Otolaryngology Department of Al-Noor Specialist Hospital between 1997 and 2017 were retrospectively evaluated. CA was classified by tomographic analysis, and patients were treated surgically with TNEE or IHD by trained otolaryngologists. Factors recorded included age at diagnosis, age at surgery, nationality, gender, type of CA (unilateral/bilateral and bony/membranous/mixed), surgical intervention used for initial repair (IHD or TNEE), revision surgery, if necessary, and re-stenosis after both primary and revision. This study was approved by the Institutional Review Board of Al-Noor Specialist Hospital.

All statistical analyses were performed with SPSS Statistics for Windows, Version 17.0.2 (SPSS Inc., Chicago, IL, USA). Quantitative parameters were reported as median, 25th and 75th percentiles, and minimum and maximum values. Differences between strata were analyzed using the Mann-Whitney U test. Categorical variables were reported as number and percentage, with differences between groups calculated using the chi-square distribution with Fischer’s exact test. 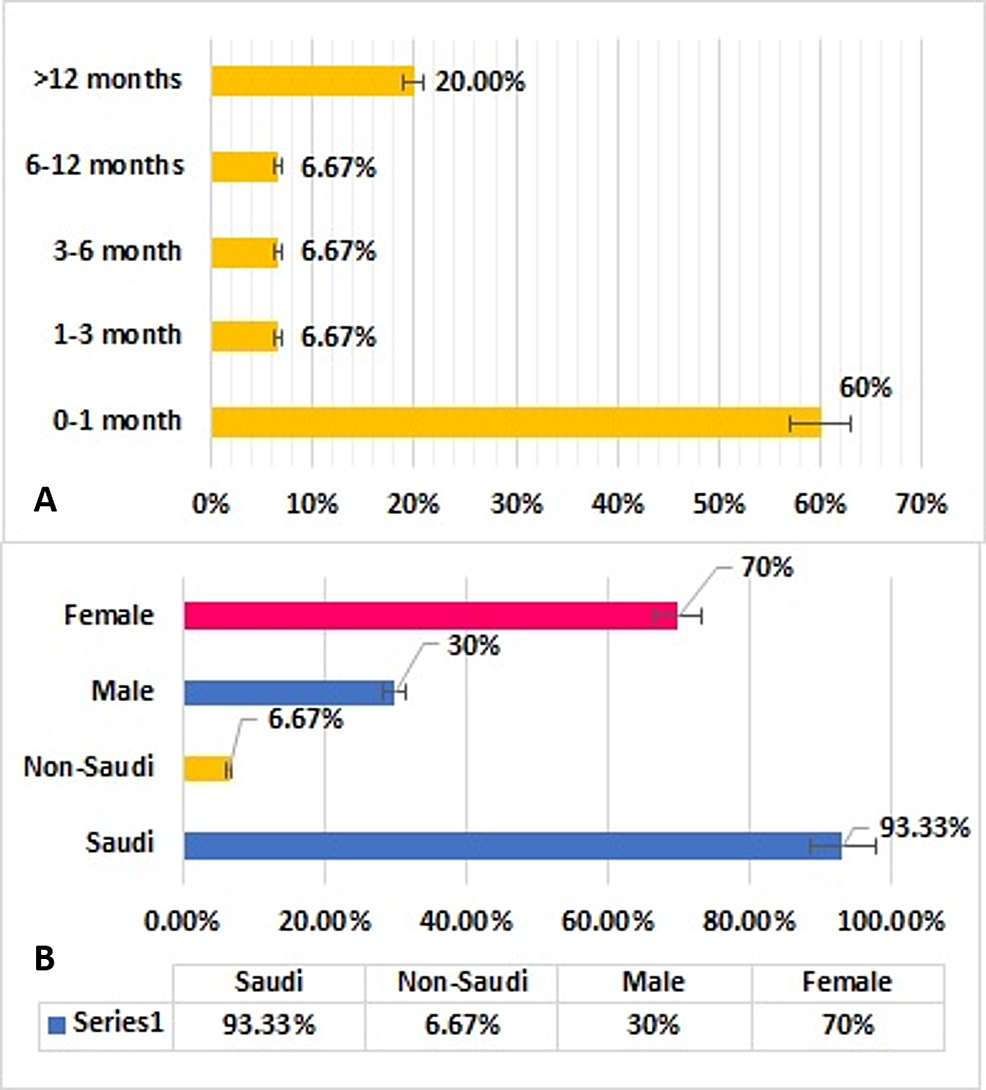 Figure 1: Distribution of patients with choanal atresia by (A) age group at the time of diagnosis and (B) gender and nationality (N=30)

Figure 2: Distribution of patients with choanal atresia by age at the time of surgery (N=30) 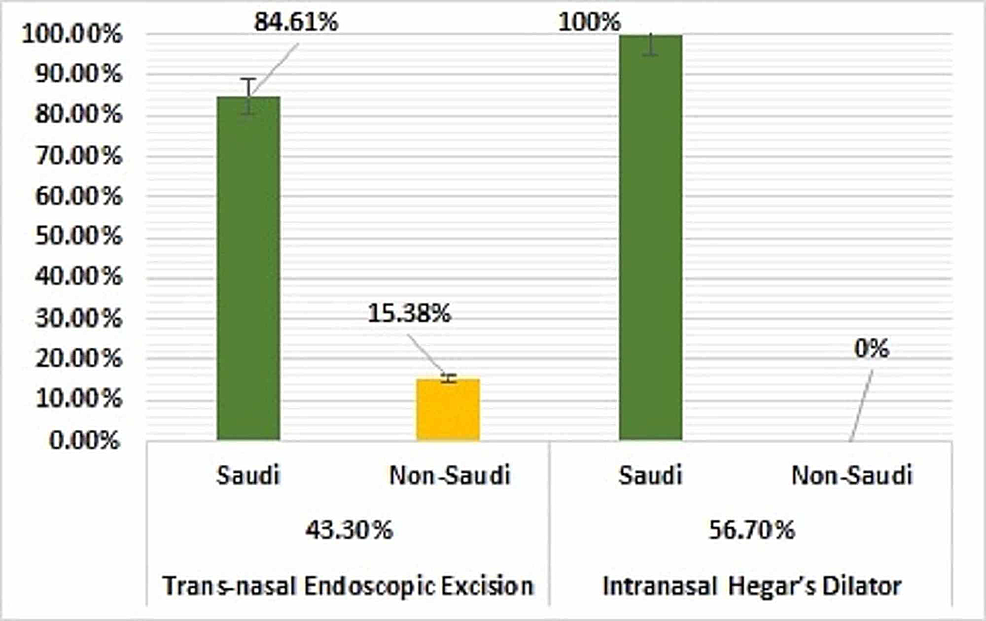 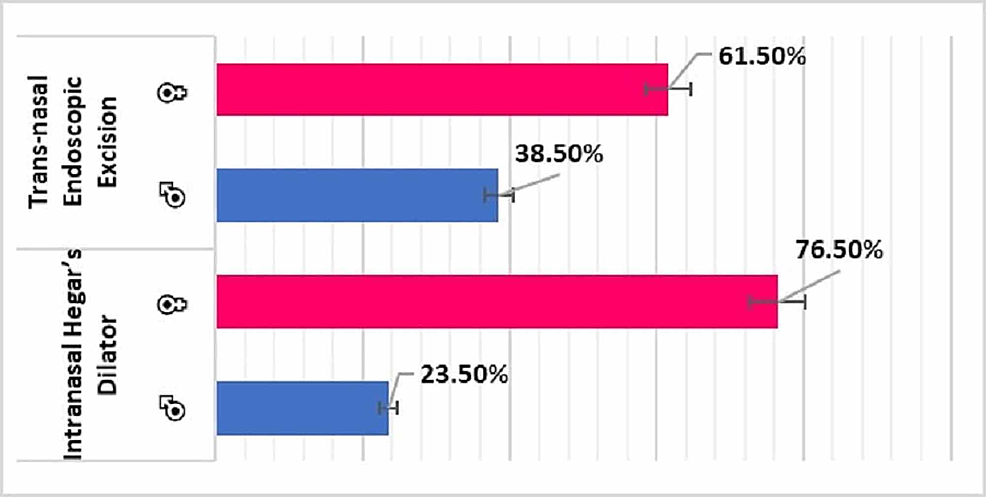 Figure 5: Distribution of patients with choanal atresia by side and nationality (N=30)

Figure 6: Distribution of patients with choanal atresia by (A) type and (B) side and gender (N=30)

Figure 7: Distribution of patients with choanal atresia who underwent (A) primary surgery and stenting and (B) re-stenosis and re-stenosis post-revision surgery (N=30)

None of the differences observed in this study was statistically significant, likely because of the small study sample.

The optimum age for surgical intervention in patients with CA is unclear, although there is a consensus that surgery should be delayed in patients with unilateral CA and non-serious airway or feeding problems until after one year of age [6,15,16,13,17]. CA repair should be delayed for as long as possible to restrict the enlargement of the surgically created aperture as the surrounding tissues grow and the aperture narrows as the patient matures. Of the 30 patients in our study, 26 (87%) underwent surgery at an age of less than 3 months and almost all at an age of less than 12 months. Early surgery may have been due to the severity of their condition and the seriousness of blockage of breathing and feeding.

The management of osseous/bony CA has been reported to be more challenging than the management of membranous CA, perhaps due to neo-osteogenesis in the former [8,18,19]. Currently, transpalatal and transnasal approaches are the most common surgical repairs for CA. The transpalatal method, however, has several disadvantages including prolonged operation time and the risks of palatal fistula, palatal muscle dysfunction, crossbite, and disturbances in dentoalveolar growth [20]. Our study compared two surgical interventions: IHD and TNEE. The frequency of TNEE was higher than that of IHD, indicating that TNEE was generally preferred. IHD tended to be performed more frequently in boys, whereas TNEE tended to be performed more frequently in girls.

CA can be classified into three types: bony, membranous, and mixed [21]. Of the 30 patients in our study, 15 (50%) had bony-membranous (mixed) type of CA, 9 (30%) had bony type of CA, and 6 (20%) had membranous type of CA. This finding confirmed that CA consists not only of a membrane in the posterior part of the nasal cavity but also a medialization of the pterygoid processes and the entire lateral nasal walls [22].

Of the 30 patients in our study, 18 (60%) underwent stent placement to prevent the narrowing of the newly formed lumen while it was still healing. However, stents have been reported to cause severe damage including abrasion of the nasal mucosa, which can lead to granulation tissue, scar formation, microbial overgrowth, and occluded mucous drainage, reducing patency [9,26-27]. Our findings are in good agreement with those several studies reporting no differences in rates of patency between patients who did and did not undergo stenting after surgery [7,9,11,16,26,28]. The difference was not statistically significant, probably due to the limited number of patients. Multicenter studies including larger numbers of patients are therefore needed, as are more prospective trials comparing IHD and TNEE.

This study found that IHD and TNEE had comparable treatment outcomes in patients with CA treated at a hospital in Saudi Arabia. Rates of re-stenosis and the need for revision surgery were independent of either surgical approach. The limited number of patients in our study suggests a need for additional studies including prospective and multicenter studies that include larger numbers of patients.

© Copyright 2020
Alshareef et al. This is an open access article distributed under the terms of the Creative Commons Attribution License CC-BY 4.0., which permits unrestricted use, distribution, and reproduction in any medium, provided the original author and source are credited.

Figure 1: Distribution of patients with choanal atresia by (A) age group at the time of diagnosis and (B) gender and nationality (N=30)

Figure 2: Distribution of patients with choanal atresia by age at the time of surgery (N=30)

Figure 5: Distribution of patients with choanal atresia by side and nationality (N=30)

Figure 6: Distribution of patients with choanal atresia by (A) type and (B) side and gender (N=30)

Figure 7: Distribution of patients with choanal atresia who underwent (A) primary surgery and stenting and (B) re-stenosis and re-stenosis post-revision surgery (N=30)

Acute Appendicitis in a Child With Acute Leukemia and Chemotherapy-Induced N ...