Empyema is mainly caused by bacterial agents; Streptococcus milleri, S. viridans, and S. pneumoniae being the most common agents in community-acquired empyema [1]. Empyema is rarely caused by fungi and Aspergillus species and Candida species are frequently reported agents [2]. Risk factors for fungal empyema include diabetes, immunosuppression, invasive surgical procedures with nonsterile equipments, and esophago- or gastro-pleural fistula [3-6]. Fungal infections have been increasingly recognized in diabetic patients because of their altered immune status [7].

Trichosporon species are basidiomycetous yeast-like anamorphic pathogens which are generally distributed in nature and found mainly in tropical and temperate areas. These organisms can be found in soil, decomposing wood, air, rivers, lakes, sea water, cheese, cattle, scarab beetles, pigeons, and bird droppings [8-10]. It can cause invasive infections in immunocompromised patients whereas in immunocompetent hosts it results in allergic pneumonia and superficial infections [11].

Here we are reporting a case of a diabetic patient who developed empyema with Trichosporon species and Fusarium species after community-acquired pneumonia. The patient was treated successfully with antifungal agents. This case highlights the significance of super-added fungal infection as a cause of empyema in a diabetic patient with community-acquired pneumonia.

A 63-year old female was referred to our hospital with progressively increasing shortness of breath for 15 days. She was being treated as a community-acquired pneumonia patient at some other hospital. Her course of illness at that hospital was complicated with the development of right-sided hydropneumothorax, for which she had underwent right-sided tube thoracostomy. Her condition did not improve, and she was referred to our hospital. On presentation her blood pressure was 110/60 mmHg, pulse was 110/min, and oxygen saturation was 95% on 10 L of oxygen. She had severe subcutaneous emphysema on face and chest. There was a chest tube placed on the right side. On chest auscultation bilateral crackles were audible. Rest of the examination was unremarkable. She was a known case of hypertension and poorly controlled diabetes mellitus, her glycated hemoglobin (HbA1c) on admission was 8.7%. She was on metformin and Humulin N. During hospitalization her blood sugar remained elevated for which Insulin Glargin 24 units was added with increased dose of Humulin N. There was no prior history of diabetic neuropathy, retinopathy, or nephropathy. 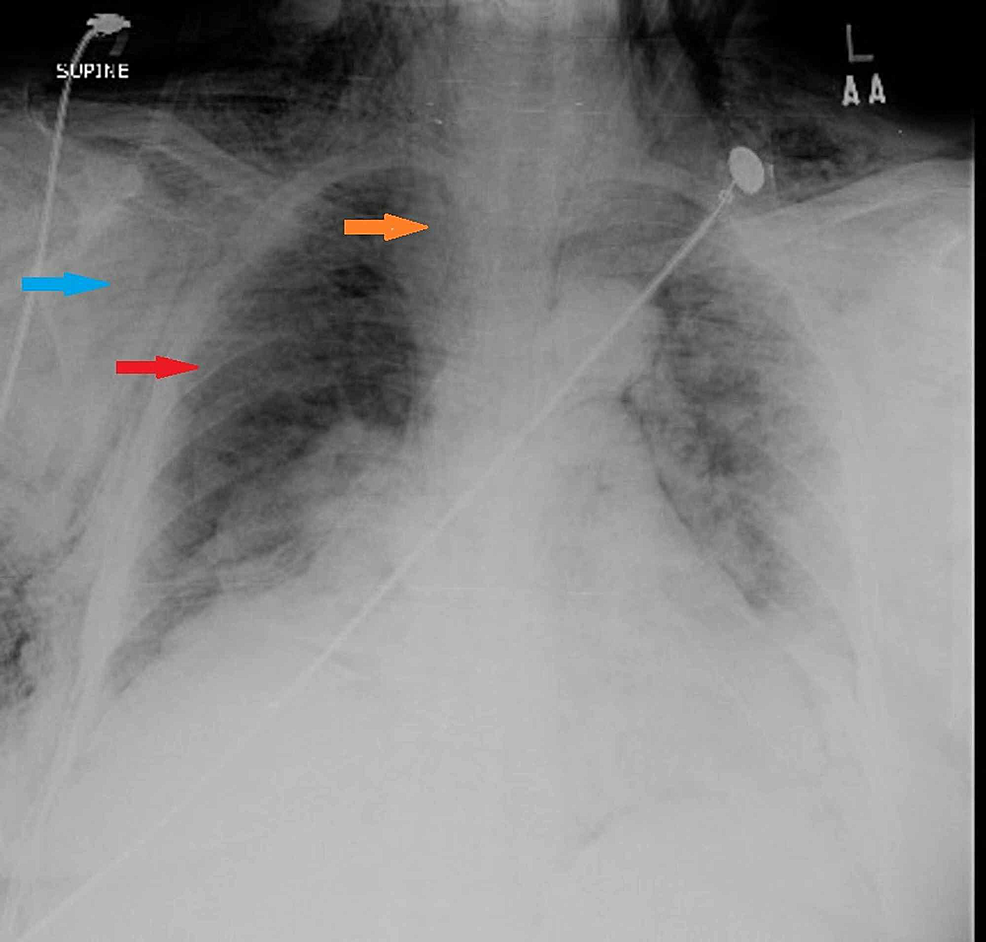 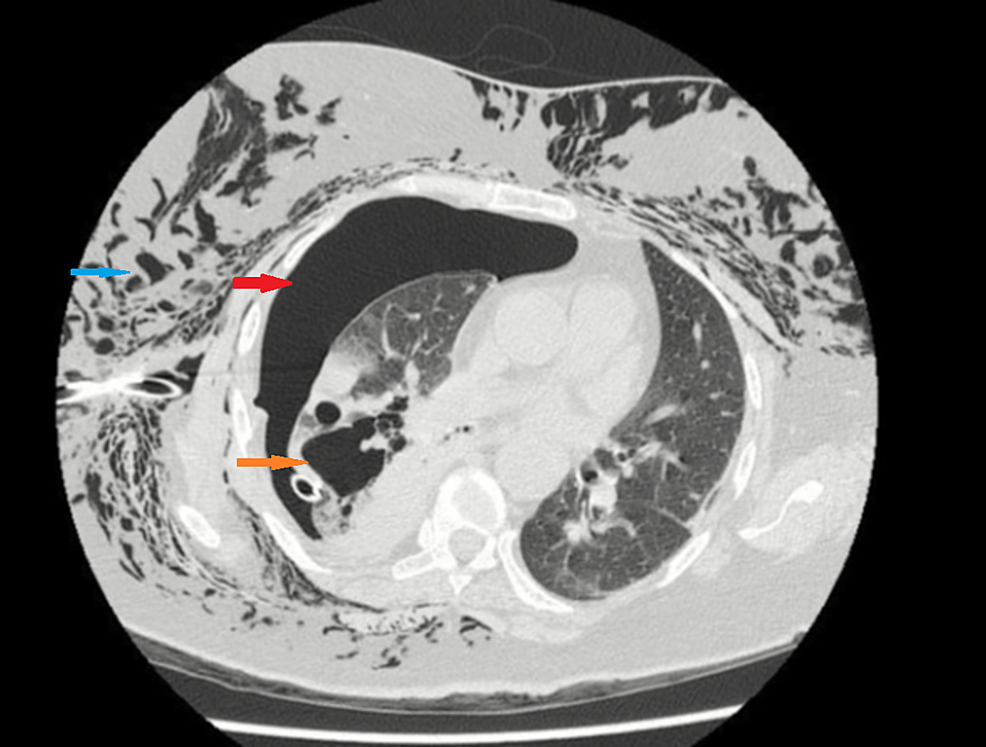 The patient was started on piperacillin/tazobactam, vancomycin, and a new chest tube was inserted on the right side. Due to no improvement in her condition, surgical intervention was planned. The patient refused surgical intervention and was discharged home on IV antibiotics with chest tube on suction. She again presented 10 days later with fever and purulent discharge from the chest tube. Pus was sent to laboratory for Gram stain and culture. Antibiotics were changed to colistin and meropenem. Pleural fluid analysis showed total leukocyte count of 99020/cu mm with 90% polymorphs and glucose of 7 mg/dL. Gram stain of pleural pus revealed numerous pus cells and fungal hyphae on smear and culture grew Trichosporon spp. and Fusarium spp. Fusarium spp. was identified based on phenotypic gross and microscopic morphology, while Trichosporon spp. was identified to genus level based on colony morphology, urease production, and microscopic morphology on corn meal agar. Susceptibility testing for both organisms was not performed. No bacterial growth was obtained on sputum, blood, and pleural culture. As tuberculosis is endemic in Pakistan, she was also evaluated for TB and mycobacterial culture was negative.

Amphotericin B deoxycholate was started and antibiotics were stopped after the third day of admission. Empyema was drained through chest tube and the chest tube was kept in place for eight weeks. She became afebrile after initiation of antifungal but developed acute kidney injury, electrolyte imbalance, and vomiting. Amphotericin B was replaced with voriconazole 200 mg twice daily which was continued for eight weeks. She tolerated the treatment very well and her condition improved gradually, and the chest tube was successfully removed after eight weeks. Follow up chest radiograph showed significant improvement (Figure 3). 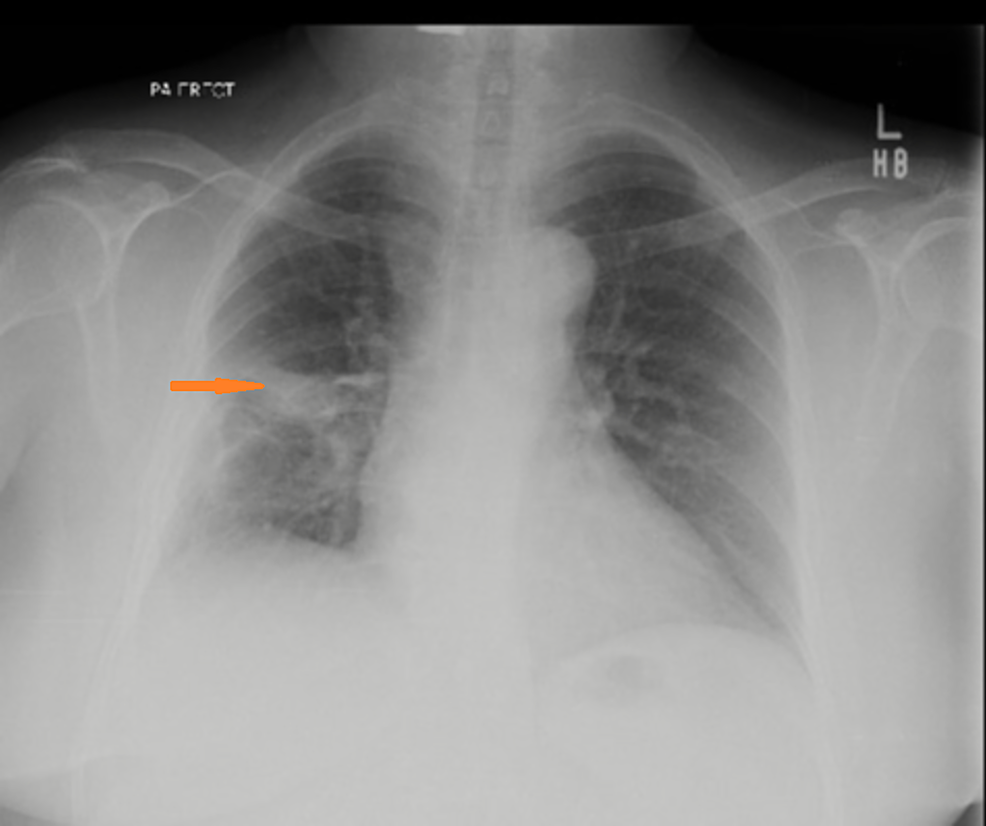 Fungal empyema itself is a rare entity with Aspergillus spp. and Candida spp. as the most commonly reported organisms [2-6]. Although isolated cases of empyema with Fusarium spp. and Trichosporon spp. have been reported co-infection with both organisms has not been reported previously [14]. Fungal empyema has been reported mainly in patients with immunosuppression, brochopulmonary infection, and postabdominal or chest surgery. Mortality in these cases remains high if not diagnosed and left untreated. Our patient was treated successfully with antifungal without any surgical intervention.

Treatment of empyema could be surgical with video-assisted thoracoscopic surgery (VATS) or open thoracotomy and nonsurgical such as thoracentesis and chest tube drainage with or without fibrinolytic agents [15]. Despite receiving surgery and pleural irrigation with antifungal agents the crude mortality rate has been reported to be as higher as 73% in fungal empyema [2]. Treatment of fungal empyema is not standardized and several drugs can be used [16]. Our patient refused surgical intervention so she was managed with chest tube drainage and systemic antifungal therapy.

Trichosporon can colonize different parts of human body. This pathogen is also able to cause deep-seated, mucosa-associated, or superficial infections. Invasive trichosporonosis has been observed commonly in immunosuppressed patients or with hematological malignancies and in critically ill patients who have been exposed to multiple invasive medical procedures [8-10]. Similarly Fusarium can also be a colonizer but can cause invasive infection in immunocompromised host [12]. Treatment of both of these fungi is species specific with some of the species having higher minimum inhibitory concentrations with amphotericin or azoles. We identified these organisms up to genus level only and susceptibility testing was also not performed.

Our patient had no other apparent risk factor of fungal infection except diabetes. However, the patient had had ICU admission, underwent invasive procedure like chest tube insertion, and received multiple broad spectrum antibiotics; all of which could increase the risk of invasive fungal infection. The other possibility is colonization but our patient did not grow any bacteria throughout her illness and did not show any improvement despite being on broad spectrum antibiotics. The patient showed significant improvement after adding antifungal therapy. This suggests that these organisms were pathogens and not a colonizer in our patient.

Our case highlights the importance of super-added fungal infection especially if patients do not respond to the conventional antibiotic therapy. Failure of treatment should raise the suspicion of other organisms as diabetic patients are at higher risk of not only bacterial but also of fungal infections. Early diagnosis and management lead to good clinical outcome.

© Copyright 2020
Iqbal et al. This is an open access article distributed under the terms of the Creative Commons Attribution License CC-BY 4.0., which permits unrestricted use, distribution, and reproduction in any medium, provided the original author and source are credited.