This is a retrospective study of 987 patients who underwent thyroid nodule fine-needle aspiration (FNA) and subsequent thyroidectomy for thyroid nodules measuring ≥ 1 cm.

The highest malignancy risk was observed in nodules <2 cm and no increase in malignancy risk for nodules >2 cm. Nevertheless, when examined by type of thyroid malignancy, the rate of follicular carcinoma and other rare malignancy increased with increasing nodule size.

Thyroid nodules have become relatively common in clinical practice, and their prevalence increases with age. Before the introduction of routine imaging, thyroid nodules were found in approximately 5-10% of people by palpation alone [1]. The prevalence of thyroid nodules varies depending on age, gender, and geographic location, and now is estimated to be 20% to 60% [2, 3]. The majority of thyroid nodules are benign, with 5% to 15% being malignant [1]. Moreover, the worldwide incidence of thyroid cancer has been increasing over the past decade, due to the diagnosis of asymptomatic disease secondary to the advancement and improvement of diagnostic technology and increased surveillance [4]. The initial screening and triage of thyroid nodules are carried out using the fine needle aspiration (FNA), which has been broadly accepted as the most cost-effective and accurate tool [5]. Given that 70% of aspirates return benign, FNA has proven to be of high value. However, 20-25% of samples return indeterminate, making FNA imperfect [6]. Prediction of thyroid malignancy is assisted by investigation of various clinical and radiological risk factors, including increased nodule height versus width, microcalcifications on ultrasonography, prior ionizing radiation exposure, nodule fixation, and firmness, hoarseness of voice, and age [1]. The nodule size has been a cause of concern for many researchers; some studies have reported an increased risk of malignancy with increasing nodule size, while many others denied an independent relationship. Nevertheless, data on the size of thyroid nodules as a determinant of carcinoma are still controversial. Different researches have been conducted for different aims. However, given the lack of published studies in Saudi Arabia, we aim to determine the impact of nodule size on the risk of thyroid cancer.

A total of 987 patients presented with thyroid nodule (≥ 1 cm) underwent thyroid nodule FNA and subsequent thyroidectomy during the study period. As shown in Table 1, the studied patients comprised of 689 females (69.8%) and 298 males (30.2%). Their age ranged between 18-80 years, and (62%) were aged 45 years and above. Five hundred sixty-seven patients (57.4%) had multiple nodules, and 420 patients (42.6%) had solitary nodules. Thyroid function was normal in almost all patients (93.9%), and 270 patients (27.4%) gave a positive family history of thyroid cancer. Nodules' size was equal or greater to 2 cm in 70.5% of the patients. Malignant nodules were found in 30.5% of the studied cases. Total thyroidectomy was found to be the most applied surgical operation on the sample cases occupying 65.5%, followed by hemithyroidectomy - 34.5%.

Table 1: Demographic data of the patients 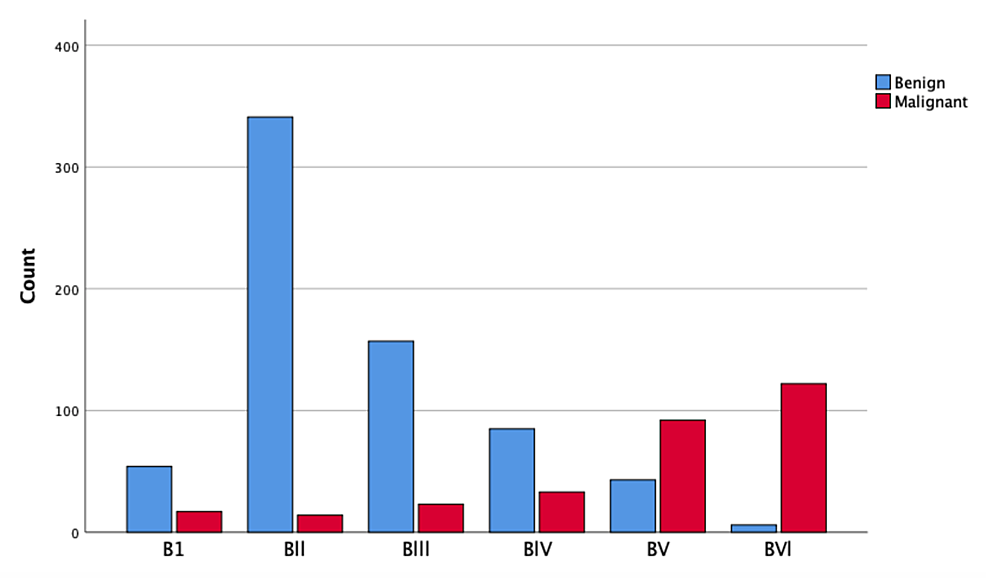 A comparison between malignant and benign thyroid nodules is shown in Table 2; multiple factors were identified to be statistically significant variables. Malignant nodules were mostly prevalent in patients aged 45 and above (p<0.001). Benign thyroid nodules were found significantly higher in females, but the incidence of malignancy was higher in men (p<0.001). Regarding the number of nodules, the prevalence of malignancy in solitary thyroid nodules is higher than that of multinodular goiter (p<0.001). More patients with malignant nodules had a family history of thyroid cancer, and the majority of them had a normal thyroid function (p <0.001). Regarding nodular sizes, the cases with a nodular size of 1.0-1.9 cm were more prevalent among cancer patients than in benign cases (p<0.001).

Table 2: Comparison between cancer and benign patients with thyroid nodules regarding demographic and clinical characteristics

When the analysis of nodule size was compared with the type and distribution of thyroid malignancy, a significant relationship was detected. The majority of cancer cases, having a nodular size of 1.0-1.9 cm, were diagnosed as papillary carcinoma, and 61.9% of cancerous nodules ≥4 cm were follicular carcinomas. Also, an increase in the proportion of the other rare types of malignancy, such as medullary, anaplastic carcinoma, and thyroid lymphoma was noted with increasing nodule size (p<0.001) (Table 4).

It is critical to detect and evaluate thyroid nodules for possible thyroid cancer because 5-15% of all thyroid nodules are histopathologically malignant [1]. In our study, we attempted to determine the relationship between nodule size and malignancy risk. We found out that thyroid cancer is more prevalent among patients ages 45 years and above as compared to patients aged below 45 years (p<0.001). In concurrence with our findings, Hughes et al. and El‐Gammal et al. reported similar results in their studies stating that thyroid cancer among patients aged greater than or equal to 45 years was statistically significant than those aged less than 45 years [7, 8]. Also, Reynolds et al. documented that thyroid cancer was more prevalent among the old age group than in the younger age group [9]. Chen et al. did not agree with the findings. Instead, they reported that thyroid cancer is common among people aged 45 years and below [10]. Witczak et al. reported that the age difference between patients with malignant diseases and those with benign diseases is not significant [11].

Our study found that the highest malignancy risk was observed in nodules <2 cm and no increase in malignancy risk for nodules >2 cm. Thyroid nodules 1.0-1.9 cm in diameter provided baseline cancer risk for comparison (64.8% risk of cancer). The overall prevalence of cancer in nodules 2.0-2.9 cm was 17.6%; in nodules 3.0-3.9 cm it was 10.6%; and in nodules 4.0 cm it was 7%, presenting with statistically significant difference (p<0.001). However, the primary influence of this association was the high malignancy rate in nodules 1.0-1.9 cm. When comparing nodules 2.0-2.9 cm, 3.0-3.9 cm, or 4.0 cm, no difference in malignancy rate was demonstrated. This suggests a possible threshold effect. Hence, it’s worth suggesting that thyroid nodule size up to 2 cm is associated with an increased risk of thyroid cancer, but further growth beyond 2 cm no longer influences cancer risk.

To conclude, the findings of this study suggest that an increase in thyroid nodule size impacts cancer risk in a nonlinear fashion. A threshold is detected at 2 cm, and extension beyond 2 cm does not influence cancer risk. Nevertheless, the risk of follicular carcinomas and other rare thyroid malignancies increases as nodules enlarge.

© Copyright 2020
Al-Hakami et al. This is an open access article distributed under the terms of the Creative Commons Attribution License CC-BY 4.0., which permits unrestricted use, distribution, and reproduction in any medium, provided the original author and source are credited.

Table 1: Demographic data of the patients

Table 2: Comparison between cancer and benign patients with thyroid nodules regarding demographic and clinical characteristics