Varicella-zoster virus (VZV) infection is generally considered as a benign and self-limiting disease. However, individuals with VZV infection can have disseminated to various organs leading to serious complications, particularly in adults. This pattern is more prevalent in immunosuppressed individuals. Disseminated varicella is historically known to involve the central nervous system (CNS), liver, and lungs. However, dissemination of varicella to the pancreas and subsequently causing acute pancreatitis has been rarely reported.

A 42-year-old African American female who was initially being treated for Pneumocystis carinii pneumonia (PCP) at an inner-city hospital developed severe epigastric pain radiating to back along with nausea on day 2 of admission. Physical findings revealed tachycardia, epigastric tenderness and newly formed vesicular rash involving the neck and face classical of varicella infection. Skin biopsy and serum sample confirmed varicella infection by VZV polymerase chain reaction (PCR) test. Labs revealed elevated lipase, amylase at a level diagnostic of acute pancreatitis. The patient had no other risk factors for pancreatitis. She was started on intravenous Acyclovir and intravenous hydration with isotonic normal saline. She was managed conservatively for other systemic complications. Pancreatitis resolved after five days of clinical presentation. She completed two weeks of Acyclovir, her condition steadily improved and she was successfully discharged home with no further recurrence.

Acute pancreatitis is a rare infectious association of disseminated varicella infection. Clinicians should always be mindful of this infectious etiology as one of the rare differentials for acute pancreatitis as this is a treatable cause and could prevent morbidity, mortality associated with this condition if treated timely.

Varicella-zoster virus (VZV), a member of the herpes zoster family, is notorious for causing varicella infection among young children while causing herpes zoster infection in adults with immunocompromised status. The VZV lies dormant in the dorsal root ganglia of the sensory nerves after initial primary infection. This later can reactivate with unilateral spread along a particular dermatome leading to herpes zoster infection. The characteristic varicella rash is a pruritic one appearing in successive crops over several days. Initially preceded by a prodrome of fever, malaise, or pharyngitis, the rash appears after 24 hours. The lesions normally begin as pruritic macules that can rapidly transform to papules and subsequently to the characteristic vesicles. This rash covers single/multiple dermatomes and persists for average of three to five days. The most frequent site of reactivation is the ophthalmic division of the trigeminal nerve, which can lead to the involvement of the thoracic nerves and the eyes. In the absence of a typical rash, herpes zoster is confirmed by a virology laboratory through testing of VZV polymerase chain reaction (PCR) [1, 2]. A secondary bacterial infection is among the commonest of the complications. Other serious complications include hepatitis, pneumonia, encephalitis, disseminated intravascular coagulopathy, myelitis, retinitis, hemiparesis, which are more common in immunocompromised patients, such as transplant recipients and patients with acquired immune deficiency syndrome (AIDS) [3]. The occurrence of acute pancreatitis due to disseminated VZV infection is extremely rare and a very few cases are only reported. We present a rare case of a female with incidentally detected HIV, who end up having acute pancreatitis with multi organ involvement from disseminated varicella-zoster infection.

A 42-year-old African American female who recently emigrated from the Caribbean Islands initially presented with non-resolving productive cough and dyspnea for two weeks. She had no significant past medical history, no history of medication use, no history of surgery, or recent prolonged immobilization. Admission vitals were: blood pressure (BP) 110/75, temperature 98.2 F, respiratory rate 18/min, sPO2 95% room air, tachycardia with 110-120 beats/min. She was anxious on presentation. Rest of the physical exam including cardiovascular, gastrointestinal, and respiratory system findings, were unremarkable. 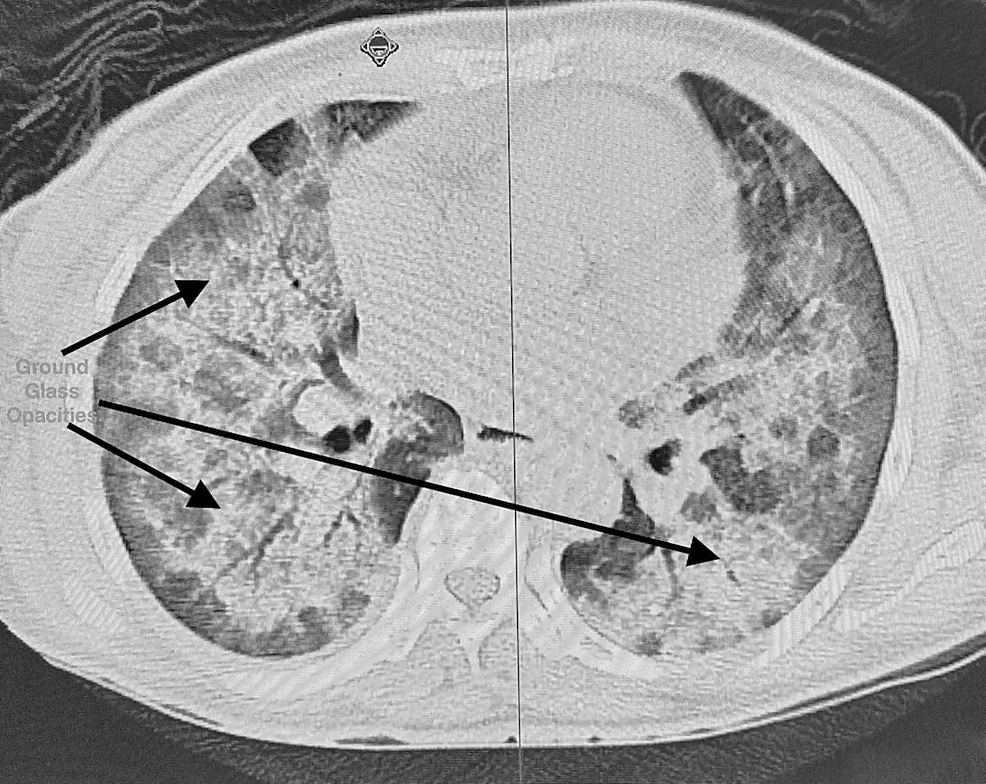 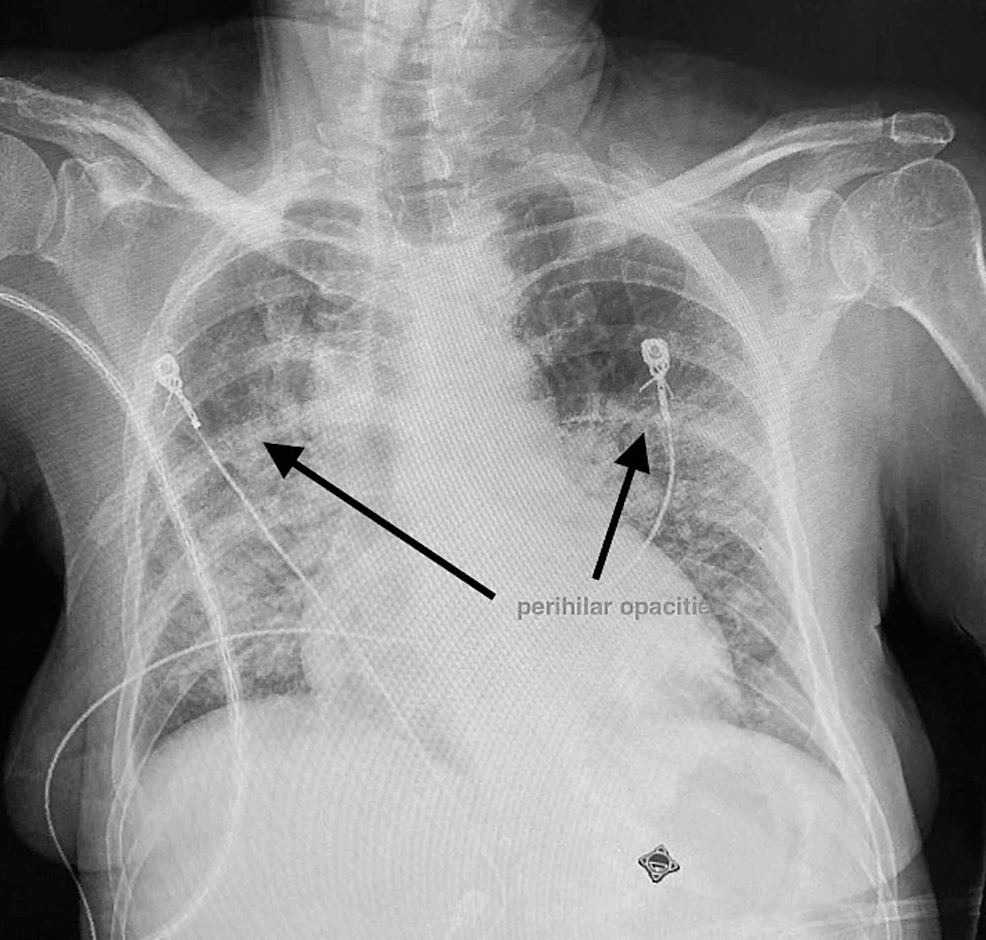 Ultrasound abdomen did not reveal any gallstones. Echocardiogram did not suggest any source of septic emboli.

Her clinical condition improved gradually with near normalization of labs. She completed 14 days course of antimicrobials for disseminated varicella. Eventually, she was started on an anti-retroviral drug Stribild (Dolutegravir/Lamivudine) daily along with a prophylactic dose of Dapsone (for PCP). Post treatment completion, oral Valacyclovir was initiated for viral suppression. After the acute stay in hospital for three weeks, she recovered well and was followed up regularly in the clinic with no further recurrence in six months of follow-up.

Acute pancreatitis is an inflammatory condition of the pancreas, also known to involve the peri-pancreatic tissues. The two commonest etiologies of acute pancreatitis in adults are common bile duct stones and alcohol abuse, accounting for 36% and 38%, respectively. Other common causes include surgery, various metabolic or autoimmune conditions, toxins, drugs, as well as infections (from bacteria, viruses, mycoplasma, and parasites) [4].

Till now, only a few cases of herpes zoster-associated acute pancreatitis have been reported; among them, most involve immunocompromised individuals, such as those in intensive care, AIDS patients, or receiving long-term immunosuppression, such as recipients of stem cell, renal or liver transplants [5-9]. There were only a handful of studies which reported acute pancreatitis associated with VZV in children with chickenpox and one study reported an elderly patient with herpes zoster suffering from systemic complications, including pancreatitis and encephalitis [10-12, 13]. Interestingly, the last case referred to was the first report of acute pancreatitis in an immunocompetent adult without any significant comorbidity. Although the mechanism of pancreatitis with herpes zoster is still unknown, VZV may remain latent in posterior sensory nerve roots that contain fibers from both skin and abdominal viscera, including the pancreas. Till now, with no definitive mechanism discovered, the common theory is that VZV remains latent in posterior sensory nerve roots which contain fibers from both abdominal viscera, including the pancreas and also from the skin. It is speculated that VZV might mediate this injury through damage of the pancreatic acinar cell membrane causing leakage of intracellular pancreatic enzymes. Another mechanism hypothesized is that the pancreas own immune response may mediate the cytopathic effect.

Immune-compromised patients are at increased risk of VZV reactivation, including transplant recipients, patients receiving selected immune modulator therapies, and HIV-infected patients [14-16]. These individuals also present with higher chances of complications from the disease (e.g., disseminated disease, ocular involvement) [3,4]. The incidence of herpes zoster has remained greater in HIV-infected individuals despite the wide use of potent antiretroviral therapy (ART).

Immunocompromised individuals like HIV-infected individuals with advanced disease and transplant recipients are at increased risk for developing complicated herpes zoster infections [16,17]. These complications include cutaneous dissemination and visceral end organ involvement. Cutaneous dissemination often presents with multiple vesicular skin lesions in a generalized distribution affecting a number of distinct dermatomes. Visceral organ involvement due to herpes zoster may present in a fulminant manner with a rapid evolving syndrome like hepatitis, pneumonia, or encephalitis and may occasionally develop in the absence of coincident rash [18].

As mentioned earlier, immunocompromised persons who get varicella are at risk of developing visceral dissemination (VZV infection of internal organs) rapidly, culminating to hepatitis, encephalitis, pneumonia, and disseminated intravascular coagulopathy. They can have an atypical varicella rash with more and atypical lesions, as well as can have a prolonged course lasting longer than those who are not immunocompromised. New evolving lesions may continue to develop for more than a week, may appear on atypical places like the palms and soles, and may be hemorrhagic in nature [2]. What causes reactivation of VZV is still a mystery begging to be solved. It is presumed that the virus remains latent in the dorsal root ganglia after the initial benign presentation as chickenpox and get reactivated later. During active herpes zoster, histopathology examination of representative dorsal root ganglia demonstrates edema, hemorrhage, and lymphocytic infiltration. Active replication of VZV in other organs, such as in the lung or the brain, can occur during either chickenpox or herpes zoster but is uncommon in the immunocompetent host.

Like chickenpox, herpes zoster is more severe in immunocompromised than immunocompetent individuals. Lesions continue to evolve for more than a week, and scabbing is not complete in most cases until three weeks into the illness. Among patients with cutaneous dissemination, the risks of dreaded complications like meningoencephalitis, pneumonitis, hepatitis, and other serious complications are increased by 5-10%. However, disseminated zoster is rarely fatal, even in immunocompromised individuals.

Antiviral therapy should be initiated in all immunocompromised patients with herpes zoster, even if they present after 72 hours. Rapid initiation of therapy is particularly critical in the severely immunocompromised patient. The nucleoside analogues acyclovir, valacyclovir, and famciclovir are the preferred antivirals for the treatment of acute herpes zoster infection. Oral antiviral therapy is usually sufficient for the initial treatment of uncomplicated herpes zoster, unless the patient has evidence of complicated disease (e.g., acute retinal necrosis, encephalitis).

Very few cases of acute pancreatitis after disseminated varicella have been reported so far [6,19].

Disseminated varicella infection has been notorious for involving multi system organs like central nervous system (CNS), lungs, hematological system mainly disseminated intravascular coagulopathy, and liver. The incidence of acute pancreatitis following disseminated varicella has rarely been reported. Asymptomatic pancreatitis may well be associated with VZV and has not been well documented for so far. Clinicians should keep a high index of suspicion of pancreatitis for such patients and intervene early to prevent complications.

© Copyright 2020
Roy et al. This is an open access article distributed under the terms of the Creative Commons Attribution License CC-BY 4.0., which permits unrestricted use, distribution, and reproduction in any medium, provided the original author and source are credited.

Conned by Conn’s: The Manifestation of Conn’s Syndrome Post-renal Transplant ...