Lupus erythematosus panniculitis (LEP) is a rare variant of cutaneous lupus erythematosus (CLE). It is characterized by the presence of a chronic inflammatory process involving the deep dermis and subcutaneous tissues. It commonly presents as deep indurated nodules or sharply demarcated plaques. Antimalarial medications are considered first-line therapy for most cases of LEP while systemic corticosteroids are saved for more resistant lesions. Intravenous immunoglobulin (IVIG) is made up of concentrated polyclonal immunoglobulin G (IgG) fractionated from the blood of healthy blood donors. Nowadays, it is used for the treatment of numerous autoimmune and systemic inflammatory diseases. In this case, we report the case of a female with multiple LEP and discoid lupus erythematosus (DLE) lesions refractory to multiple standard therapy modalities that responded dramatically to IVIG.

Lupus erythematosus panniculitis (LEP), also known as lupus profundus (LP), is a rare subtype of lupus erythematosus (LE) consisting of 1%-3% of patients with cutaneous lupus erythematosus (CLE) [1]. LEP is a chronic inflammatory process that mainly involves the deep dermis and subcutaneous tissues, usually presenting as deep indurated nodules or sharply demarcated plaques [2]. It can either present as the sole manifestation of the disease or in association with discoid lupus erythematosus (DLE) or systemic lupus erythematosus (SLE). The most commonly involved areas include the lateral aspects of the arms and shoulders, buttocks, trunk, breast, face, and scalp [3]. Antimalarial medications are considered first-line therapy for most cases of LEP; meanwhile, systemic corticosteroids are saved for resistant lesions [2,4]. Intravenous immunoglobulin (IVIG) is derived from the blood of healthy blood donors and is made up of concentrated polyclonal immunoglobulin G (IgG). It was initially used as a treatment for patients with immunodeficiency. Nowadays, it is used as an off-label therapy for a wide variety of autoimmune and systemic inflammatory diseases, especially in dermatology. However, its mechanism of action is unknown [5-6]. Herein, we present a case of a female with multiple refractory LEP and DLE lesions over the face and scalp, respectively, which responded dramatically to IVIG.

In September 2016, a 34-year-old Saudi female was referred to the department of dermatology at King Faisal Specialist Hospital and Research Center (KFSHRC) with the aim of establishing a suspected diagnosis of LEP and for further management. The patient had been following up at multiple hospitals and has tried different treatments, including intralesional and systemic corticosteroids, hydroxychloroquine (HCQ), methotrexate, and mycophenolate mofetil with no satisfactory control over the lesions. On presentation, the main complaint of the patient was the presence of painful skin lesions over the face and two painful localized areas of alopecia over the scalp for more than 10 years. On physical examination, the patient had multiple, indurated, erythematous, tender plaques on the cheeks and one lesion on the forehead, measuring 0.5 cm in size. On her scalp, over the vertex, there were two well-defined erythematous, indurated, scarring patches of alopecia measuring 1.5 x 3 cm and 1 cm in size, with no other involved areas. Laboratory investigations conducted at the hospital revealed leucopenia, 3.89 x 109/L, and positive antinuclear antibodies (ANA) (titer 1:640 with a speckled pattern). However, anti-ds-DNA, anti-SSA (Ro), anti-Smith, anti-SCL-70, anti-JO1, and anti-RNP antibodies were negative. A skin biopsy taken from the cheek revealed lobular panniculitis with lymphocytic, including plasma cell infiltrates, dermal perivascular and periadnexal lymphocytic infiltrates with mucin deposition, follicular plugging, vacuolar-type interface dermatitis, and epidermal atrophy (Figure 1 and Figure 2). 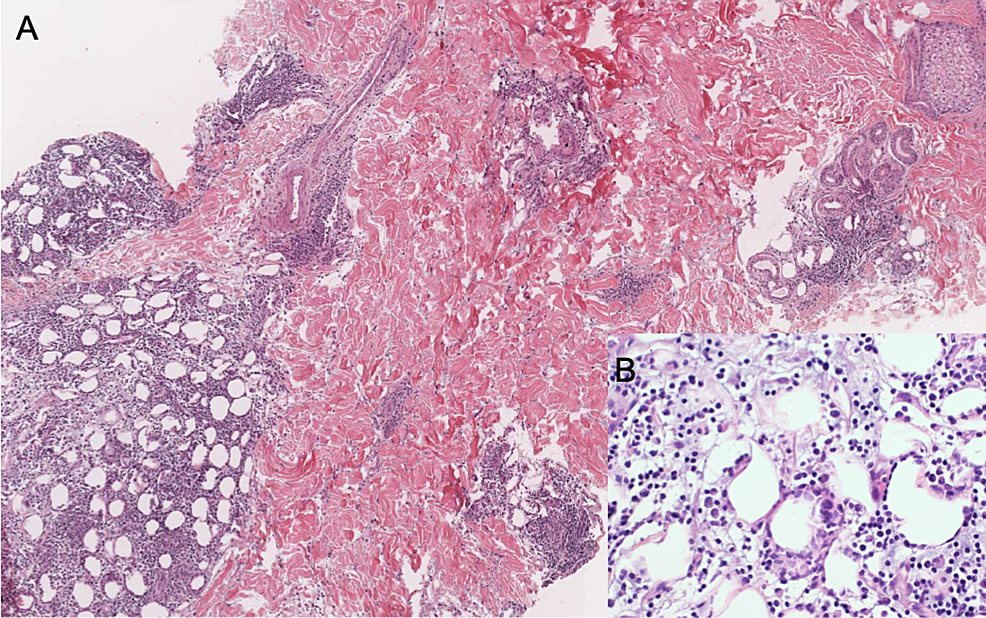 A: Section from subcutaneous tissue shows lobular panniculitis and perivascular and periadnexal lymphocytic infiltration. B: The infiltrate is predominantly lymphocytic with scattered plasma cells. 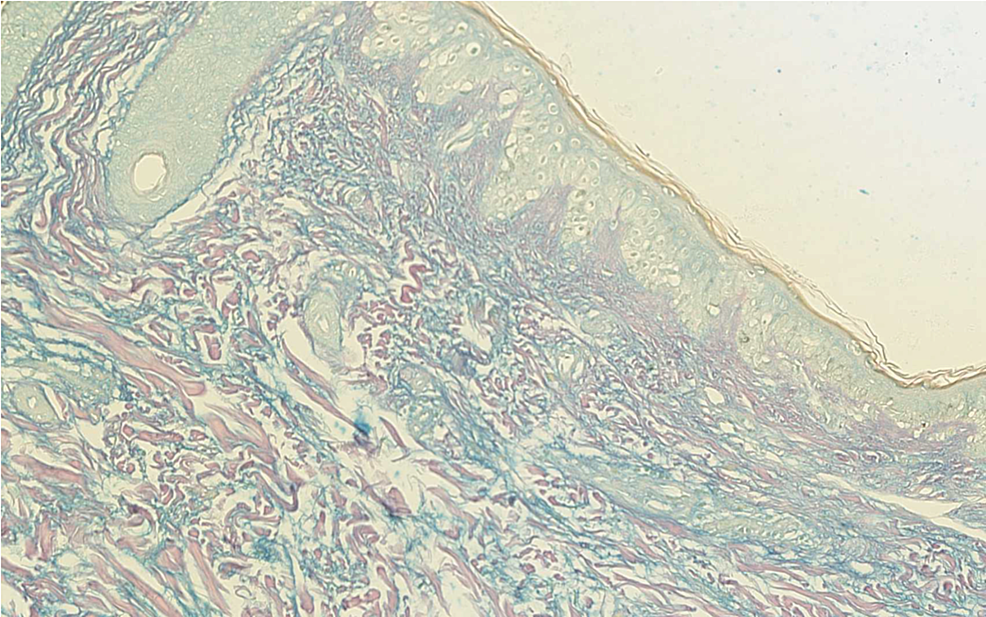 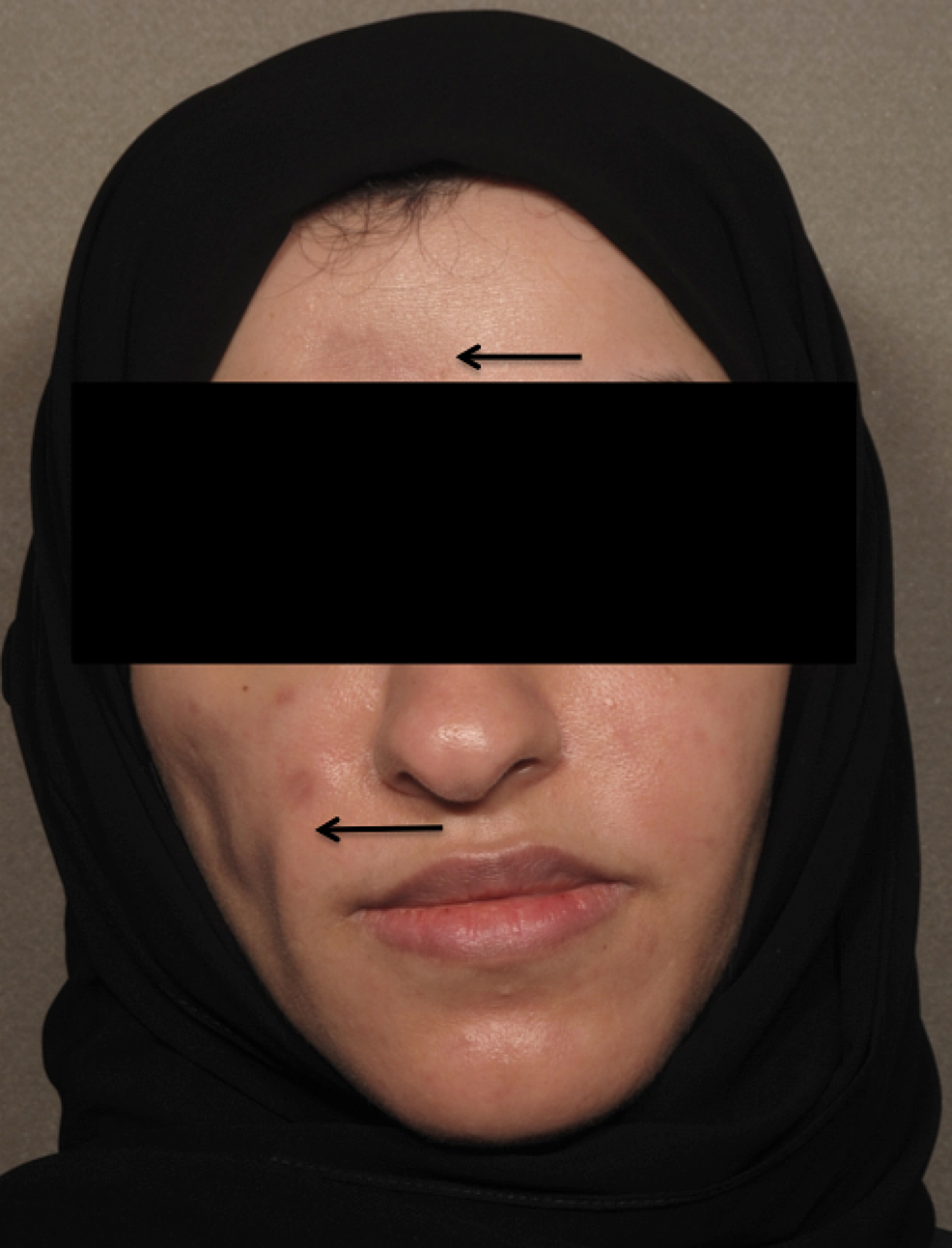 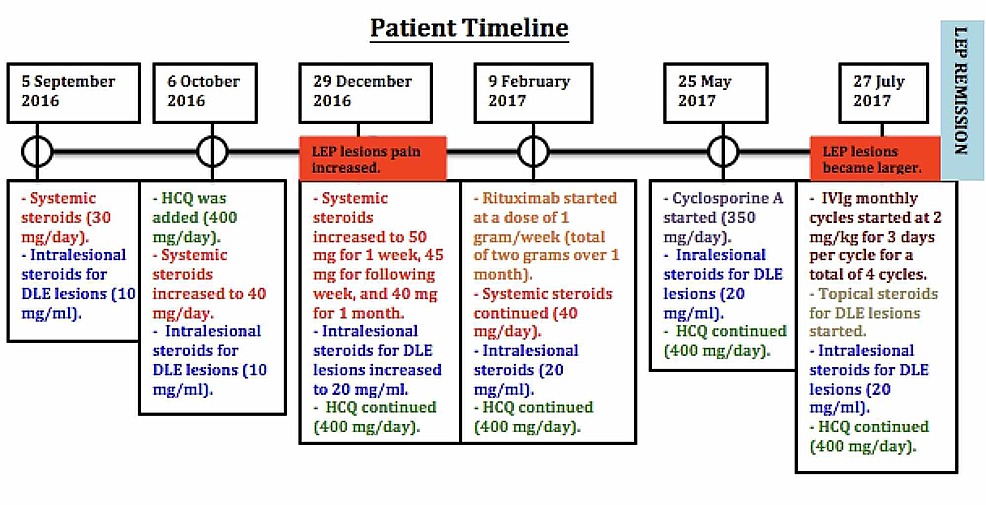 LEP is a rare subtype of chronic CLE [7]. It was first described by Kaposi in 1883 and was later named “lupus erythematosus panniculitis” by Irgang in 1940 [8]. Although the terms LEP and lupus profundus are used interchangeably, it is suggested that only when the subcutaneous inflammatory process is accompanied by overlying DLE lesions is it called lupus profundus [7]. LEP most commonly affects women between the ages of 30 and 60 years. It is characterized by the presence of deep, tender subcutaneous nodules or plaques located in adipose-rich areas such as the arms and buttocks. Histopathologically, it is characterized by the presence of lymphocytic infiltrates and hyaline necrosis of the fat lobules [7-9]. The gold standard for establishing a diagnosis is by a histopathological examination of a lesional skin specimen. LEP has a relapsing course and new lesions may develop in previously affected areas or in new areas [10]. The healing of the lesions leaves behind irreversible lipoatrophy, which can be a major source of disfigurement and depression [11]. Commonly utilized treatments include antimalarial drugs, such as chloroquine or HCQ for mild cases of separate LEP. Topical and intralesional corticosteroids are also used. In refractory cases, methotrexate, cyclosporine A, cyclophosphamide, thalidomide, and the monoclonal antibody rituximab have been used [10-11]. IVIG is a fractionated blood product consisting of pooled IgG antibodies. Over 10,000 healthy blood donors are required for the production of a single batch. Initially, it was used for the treatment of primary and secondary immune deficiencies; however, its use has expanded tremendously in the past few decades. Effects produced by IVIG include the blockage and degradation of complement, induction of immunomodulatory Fc receptors, inhibition of B-cells, altering T-cell function, migration, and cytokine production. It is either used as a monotherapy or with an immunosuppressant [6]. There are multiple cases in the literature reporting the successful treatment of refractory DLE lesions using IVIG [6]. However, there is only one report in the literature reporting the successful treatment of LEP using IVIG [11]. The high cost of IVIG is a major drawback to its use [5]. The common side effects associated with IVIG administration include flu-like symptoms, such as flushing, nausea, fever, malaise, and lethargy; however, these side effects can be overcome easily by slowing down the infusion rate and by the administration of antihistamines and non-steroidal anti-inflammatory drugs (NSAIDs) [12]. In this case, the disease follows a chronic course and is resistant to multiple widely used treatments. Systemic corticosteroids, antimalarials, methotrexate, rituximab, cyclosporine A, and mycophenolate mofetil resulted in limited success. IVIG resulted in complete resolution of LEP lesions; however, DLE lesions required more aggressive immunosuppression using mycophenolate mofetil, which was added later.

LEP is a rare variant of CLE. Antimalarial drugs, systemic corticosteroids, and immunosuppressive medications are often effective in the treatment of LEP. In this case, IVIG has proven effective when other modalities provided suboptimal control. Therefore, IVIG can be used when other standard therapy modalities have failed to control the disease. However, large clinical trials are needed to prove the efficacy of IVIG in the treatment of LEP.

Human subjects: Consent was obtained by all participants in this study. King Faisal Specialist Hospital and Research Center issued approval 2180267. Your application to submit manuscript /abstract/ poster/oral presentation titled "Intravenous Immunoglobulin in the Management of Lupus Erythematosus Panniculitis: A Case Report" was received by the Office of Research Affairs (ORA) on 15 August 2018.

It has been assigned Publication No. 2180267 (No. appears in the upper left side of the publication submission form) and is cleared for publication (copy attached). Please use this number in your future correspondences with ORA regarding this publication.

© Copyright 2020
AlQadri et al. This is an open access article distributed under the terms of the Creative Commons Attribution License CC-BY 3.0., which permits unrestricted use, distribution, and reproduction in any medium, provided the original author and source are credited.

A: Section from subcutaneous tissue shows lobular panniculitis and perivascular and periadnexal lymphocytic infiltration. B: The infiltrate is predominantly lymphocytic with scattered plasma cells.