Hyperammonemia is a common cause of encephalopathy encountered in an intensive care unit (ICU). Absence of pre-existing liver disease may misguide a clinician and cases of non-cirrhotic hyperammonemia may be missed in ICU leading to life-threatening outcomes such as cerebral edema and herniation. A critical care physician must look beyond liver cirrhosis as a cause of hyperammonemia so that infrequent but potentially reversible causes of encephalopathy are not missed, and patient treatment is not jeopardized.

Acute encephalopathy refers to global cerebral dysfunction in the absence of underlying primary structural disease of the brain [1]. It is a common cause of admission to an intensive care unit (ICU). Most of the causes of acute encephalopathy are potentially reversible but delayed or missed diagnosis of underlying etiology can prolong hospital stay, increase mortality and adversely affect functional and cognitive function in the long run [2]. Thus, it is imperative for a clinician to promptly recognize and treat any potentially reversible cause of acute encephalopathy in a patient admitted to ICU. 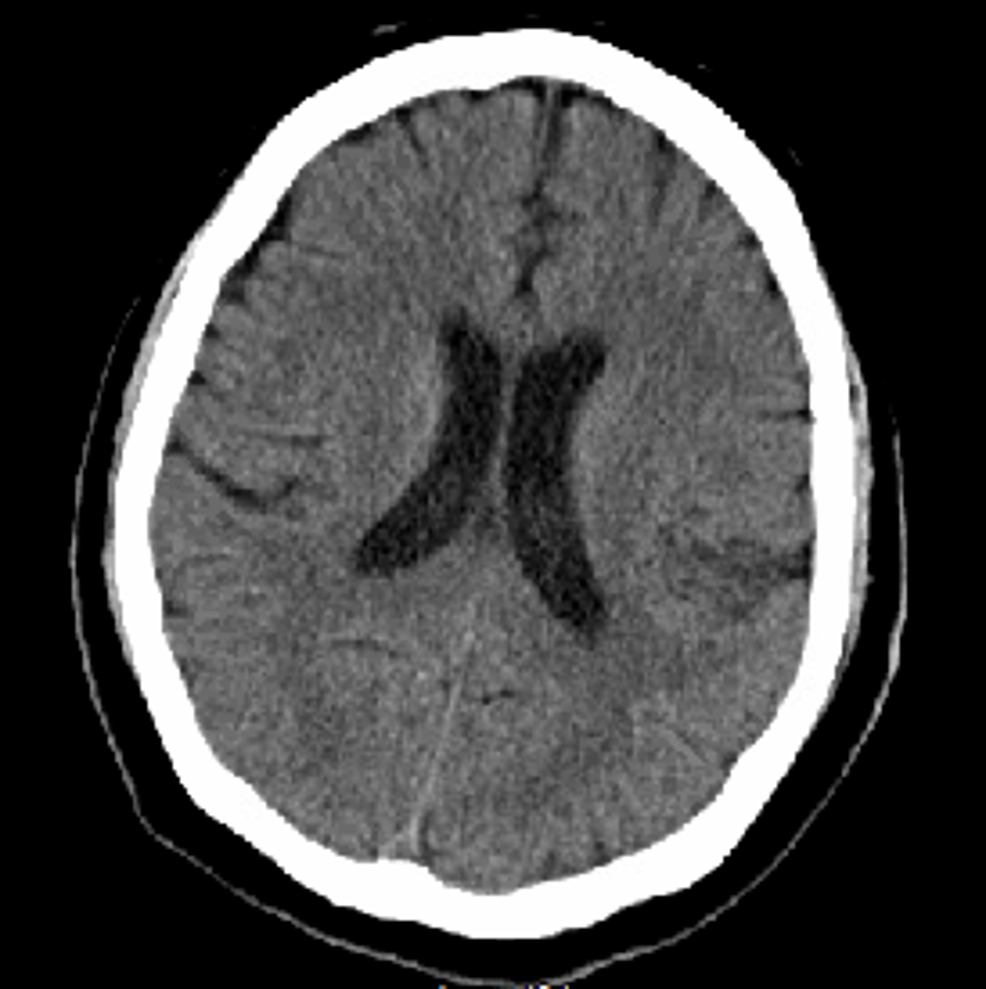 Figure 1: Computed tomography of the head without contrast did not reveal acute intracranial pathology. 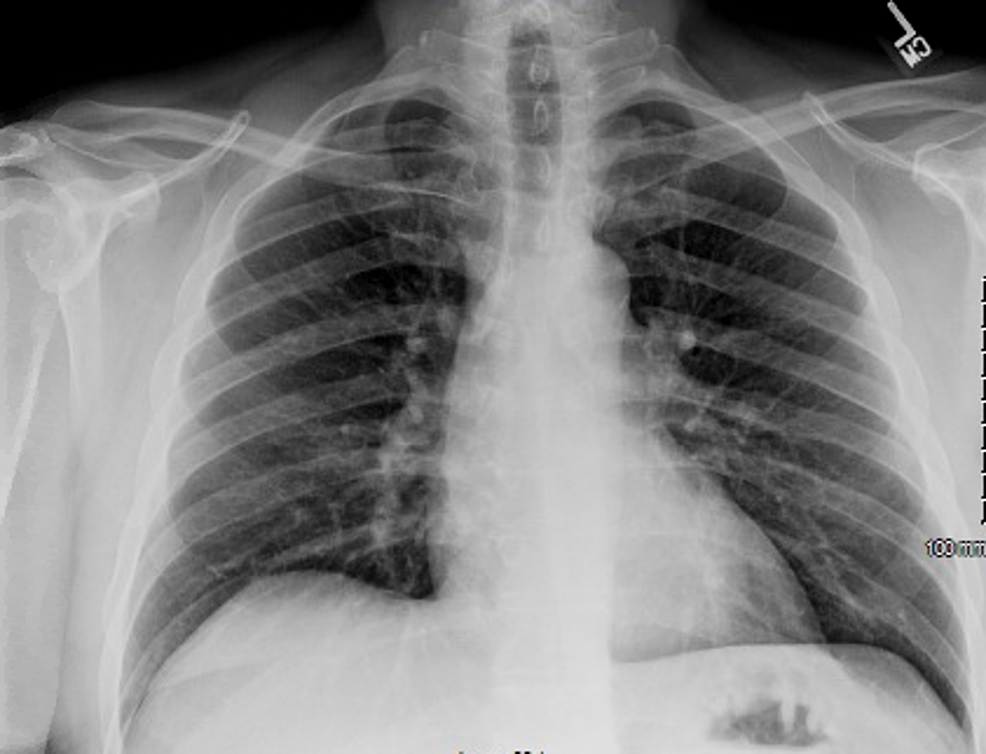 Figure 2: Chest X-ray did not show any acute abnormality.

Arterial blood gas showed ph 7.44, pCO2 35.2 mmHg, pO2 98 mmHg, bicarbonate 23.2 mmol/L on room air. Blood cultures did not show any growth. We did not perform a lumbar puncture, as there was no suspicion for acute meningoencephalitis based on history and examination. Electroencephalogram showed mild to moderate slowing with theta frequency predominantly consistent with mild to moderate encephalopathy.

His serum ammonia level was elevated to 274 μmol/L (reference range: 11-35). CT of the abdomen without contrast did not reveal cirrhotic changes of the liver (Figure 3). 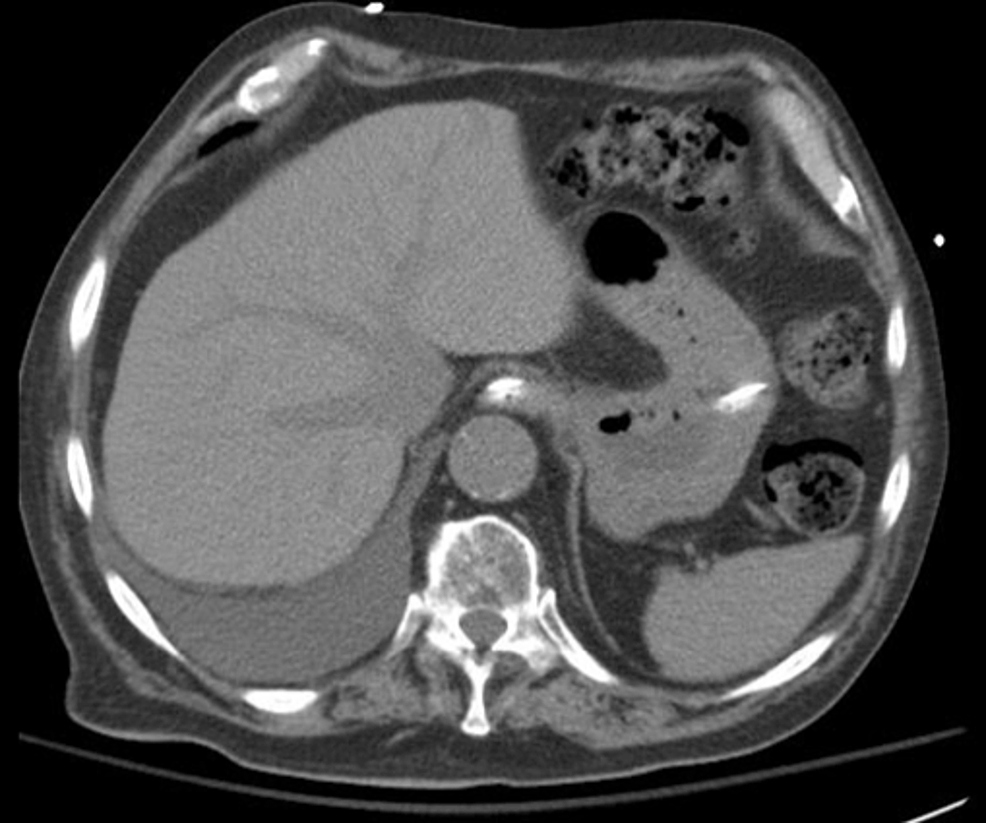 A liver ultrasound with Doppler showed the normal size and echo texture of the liver and mildly dilated main portal vein. It also showed patent hepatic and portal veins with normal directional flow seen through the portal vein (Figure 4). 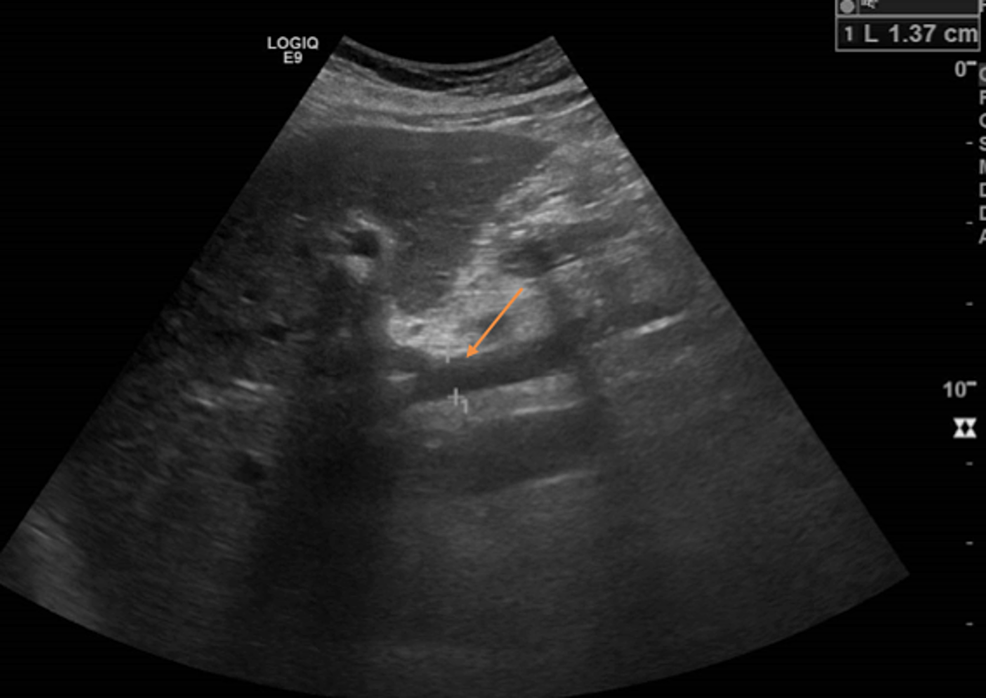 Hepatitis A IgM antibody, hepatitis B surface antigen, hepatitis B core IgM antibody were non-reactive while hepatitis C antibody titer was less than 0.1 signal to cut off ratio (reference range <0.8). Esophagogastroduodenoscopy did not reveal esophageal varices or any source of active bleeding. Serum and urine amino acid concentration obtained by liquid chromatography-mass spectrometry did not reveal aminoacidopathy. On careful review of the patient’s history before hospital admission, it was revealed that he was severely constipated for at least a week before the onset of encephalopathy. The cause of severe constipation could not be exactly determined. There was no new medication prescribed or use of sodium valproate at home. We treated the patient with lactulose through nasogastric tube 20 gm every six hours to maintain 3-4 loose stools per day. The patient’s serum ammonia level trended down to 46 and thereafter to 30 μmol/L after four days. Mental status improved significantly with a decrease in hyperammonemia and relief of constipation. He was subsequently transferred out of ICU and strongly recommended to avoid constipation with as-needed use of lactulose.

Most of the cases of hospital admission due to acute encephalopathy are metabolic in origin. Hyperammonaemia is an extremely commonly encountered cause of acute encephalopathy. Ninety percent of hyperammonemia-induced encephalopathy is associated with underlying liver disease [3]. In the remaining 10% of cases, non-cirrhotic causes of hyperammonemia should be determined and appropriately treated. Ammonia causes encephalopathy due to its toxic effect on neurons. It increases neutral amino acid uptake by the brain through the enhancement of L-amino acid transporter at the blood-brain barrier. As a result of increased concentration of neutral amino acids such as tryptophan, phenylalanine, and tyrosine, synthesis of neurotransmitters like serotonin, dopamine, and norepinephrine is decreased [4,5]. Hyperammonemia can also cause brain edema due to increased intracellular osmolarity resulting from the increased conversion of ammonia to glutamine [6]. Some studies in animal models have also described oxidative stress due to elevated ammonia resulting in cerebral edema [7]. Ammonia inhibits the generation of inhibitory and excitatory postsynaptic potentials and alters neural electric activity [8].

In our patient, there was no established identifiable cause of hyperammonemia discussed above. He had severe constipation for over a week before the onset of encephalopathy. His encephalopathy was likely due to increased absorption of ammonia into the mesenteric blood supply due to very slow transit constipation. Such absorption of ammonia most likely overwhelmed hepatic excretion. A similar case scenario and hypothesis has been previously described [15]. We primarily used lactulose, a nonabsorbable disaccharide, to treat hyperammonemia and the patient improved significantly after maintaining three to four bowel movements daily. Lactulose helps decrease endogenous ammonia production, reduces intestinal pH, entraps ammonia as non-diffusible ammonium in the gut lumen and increases fecal nitrogen load by the direct cathartic effect. If ammonia had persistently elevated to >100 mol/L, we could have used conventional or peritoneal dialysis to enhance ammonia elimination [16].

Absence of pre-existing liver disease may misguide a clinician and cases of non-cirrhotic hyperammonemia may be missed leading to life-threatening outcomes such as cerebral edema and herniation. Persistent unresolved encephalopathy increases hospital stay, increases morbidity and mortality and leads to significant cognitive and functional decline in the long run. Thus, clinicians must routinely check serum ammonia in patients with acute encephalopathy of unclear etiology and must perform workup to determine potentially treatable causes.

© Copyright 2020
Sharma et al. This is an open access article distributed under the terms of the Creative Commons Attribution License CC-BY 3.0., which permits unrestricted use, distribution, and reproduction in any medium, provided the original author and source are credited.

Figure 1: Computed tomography of the head without contrast did not reveal acute intracranial pathology.

Figure 2: Chest X-ray did not show any acute abnormality.