Perforation of a gastrointestinal tract as a complication of intubation is unusual, and only few cases have been reported. Prompt recognition and management of gastrointestinal tract perforation are needed to limit the morbidity and mortality of this condition. We presented a case of an acutely ill patient who developed gastric perforation following difficult intubation to remind clinicians of a life-threatening complication that can develop following a life-saving procedure.

A 76-year-old woman presented to our emergency department with severe headache, vomiting, and alteration of mental status. She had a past medical history of cerebrovascular disease with left-sided residual weakness, hypertension, type 2 diabetes mellitus, and hyperlipidemia, but did not report any previous history of dyspepsia nor peptic ulcer diseases. The decision was made to intubate her for airway protection due to decreased levels of consciousness. She had failed endotracheal intubation from esophageal intubation twice. After successful intubation performed by an anesthesiologist, she was found to have significant abdominal distension. The orogastric tube was placed to suction, but no significant decompression was achieved. Pan computed tomography (brain, chest, abdomen, and pelvis) identified massive intracranial hemorrhage with obstructive hydrocephalus and very large pneumoperitoneum, as demonstrated in Figure 1. She underwent exploratory laparotomy, which found 9 cm perforation of the anterior gastric wall and serosal tear in the posterior gastric wall; all were repaired with silk sutures. Neurosurgery placed right-sided external ventricular drainage for hydrocephalus but decided not to perform any other decompression surgery due to grave prognosis. She did not have any acute complications from exploratory laparotomy but progressed to brain death due to massive hemorrhagic stroke. The patient expired shortly after palliative extubation. 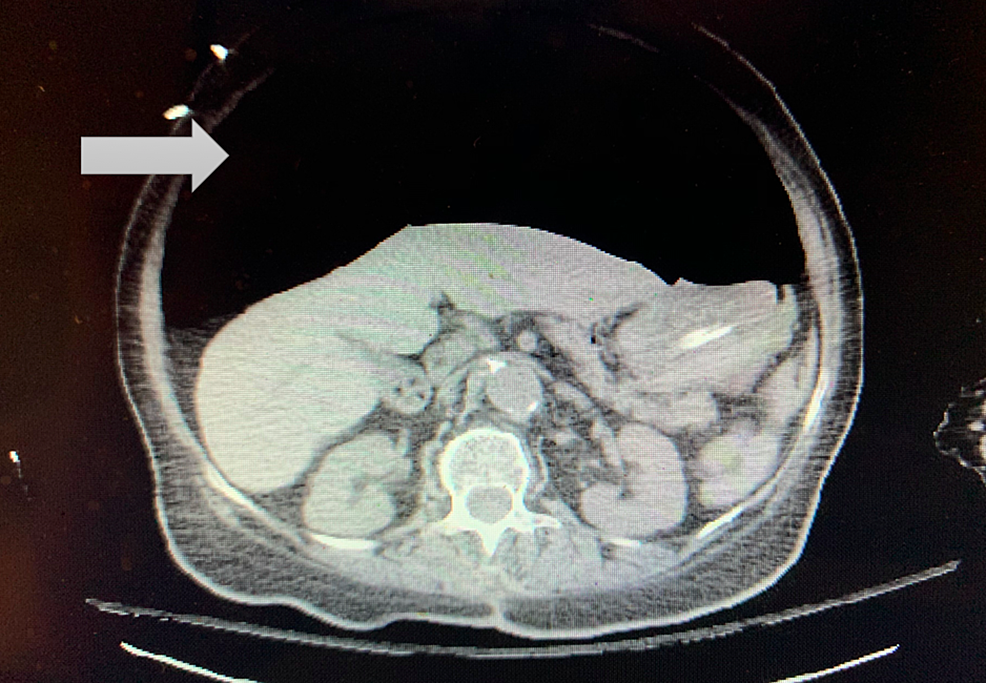 Our patient had no prior history of peptic ulcer diseases nor chronic non-steroidal anti-inflammatory drug use. She had unintentional esophageal intubation twice and received Ambu-bagging in between, which most likely contribute to a gastric perforation due to an overinflate stomach. In general, the stomach of a healthy adult individual can tolerate pressure up to 120-150 mmHg before its rupture [3]. Abdominal distention and generalized peritonitis signs, including rebound tenderness and rigidity, are commonly found following the rupture of the stomach because of the release of gastric content and air. Upright chest X-ray may identify air under the diaphragm. Decompression of the stomach, including aspirating of gastric contents and air via a gastric tube, will not resolve abdominal distention following gastric perforation, as observed in our patient. The reason for unresolving distention is that the air and fluid are already released into the peritoneal space.