This is a single-center retrospective cross-sectional study conducted at King Abdulaziz Medical City Jeddah, Saudi Arabia, between January 2013 to December 2018. Data were collected from patient’s charts; the clinical and echocardiographic findings, alongside with pericardial fluid analysis, were collected. Procedure and patients outcomes were obtained and reported.

Etiologies of pericardial effusion requiring drainage depend on the population studied. Patients with malignant effusions have worse outcomes than non-malignant effusion. Pericardiocentesis is required to ascertain the cause and risk-stratify patients.

This research is an observational cross-sectional study conducted at King Abdulaziz Medical City, Jeddah. The study included all patients who underwent percutaneous pericardiocentesis between January 2013 till December 2018. Patients who had surgical drainage or were less than the age of 16 years were excluded. The data were collected from patients‘ files, including sex, age, date of procedure, medical history, laboratory values, effusion size, fluid sample characteristics, clinical diagnosis, and date of death if available. Results of serological testing, if reported, cultures in peripheral blood, and pericardial fluid results were obtained. Effusion size was determined by reviewing pre-procedural echocardiogram reports. The small size was defined as <10 mm, medium >10 and <20 mm, and large >20 mm. Analyses of fluid characteristics, including macroscopic aspects, biochemistry, cytology, and microbiology, were collected.

The hospital electronic system identified 107 patients with pericardial effusion. Among those, only 39 met the inclusion criteria. All patients had been diagnosed with pericardial effusion using echocardiography and were categorized into mild, moderate, and severe. The mean age was 52 ± 19 years old. Females represented more than half of patients 22 (56.4%). Comorbid diseases were reported as follows; 28.2% had diabetes mellitus, 35.9% had hypertension, while heart failure was seen in 18%. Twenty percent had lung cancer; breast cancer was seen in 15.4% and lymphoma in 7.7%. Metastasis was present among 35.9%. Five patients (12.8%) had autoimmune diseases, and one patient (2.6%) was not known to have any medical illness. Patients‘ demographics and chronic diseases are shown in Table 1.

There were 32 cases of severe pericardial effusion (82%); 27 of them (69.2%) had echocardiographic features of cardiac tamponade (Table 3).

The pericardial fluid appearance was bloody in 25 patients (64.1%), while serous and serosanguinous appearances were 25.5% and 15.4%, respectively. Eighteen percent showed malignant cytology. Pericardial fluid analysis is shown in Table 4.

Following pericardiocentesis, medium-term outcomes are demonstrated in Table 5. Nineteen patients (50%) died within two months. Re-accumulation was seen in 20.5% of the patients that required re-drainage. Procedure-related complications like arrhythmia, hematoma, and cardiac arrest were seen in 5.1%, 5.1%, and 2.6%, respectively.

There was a significant association between malignant pericardial effusion and death (P-value 0.0001) (Table 6).

Table 6: Correlation between malignancy and outcomes after pericardiocentesis

The median survival of patients with pericardial effusion post drainage was reported to be 54 days, as shown in Figure 1. 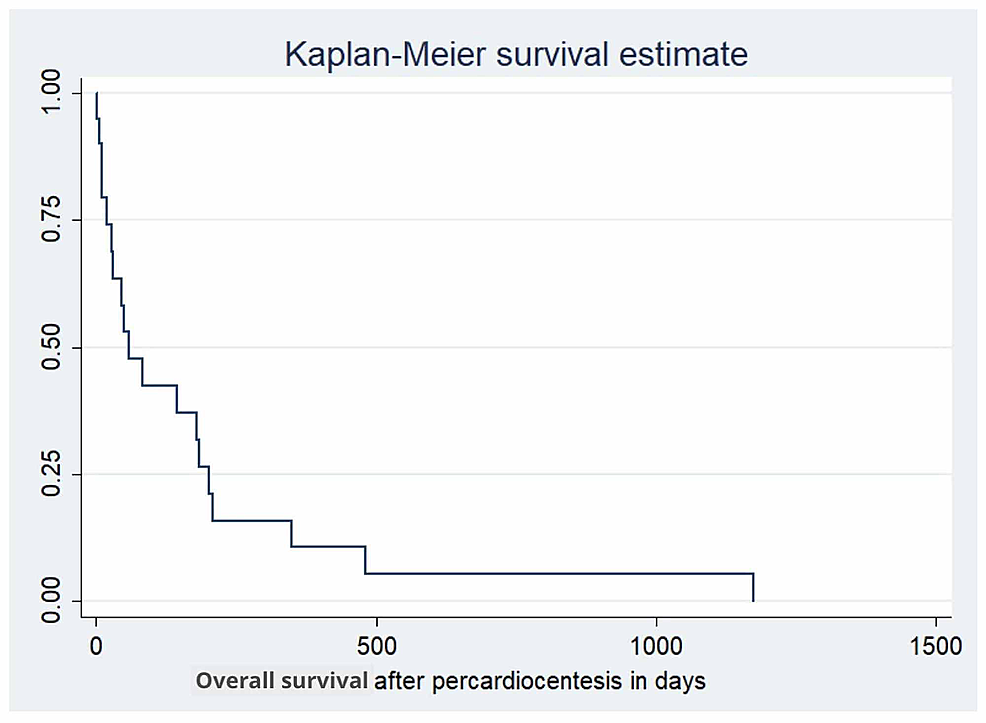 The current study was conducted on 39 patients from the western coast of Saudi Arabia. The most prevalent cause of pericardial effusion among these patients was malignancy (48.7%). In contrast, infection and uremia were ranked second. This is probably because the hospital is a tertiary care center for oncology patients and has a large dialysis unit. Also, all infectious effusions were secondary to bacteria. Iatrogenic and idiopathic causes had the same prevalence of 10.3%. There were 82% of patients with severe effusion; 69% of them had tamponade. The median overall survival was 54 days. It is not surprising that patients with malignant effusion had significantly worse survival. Our data is in agreement with what was reported by Strobbe et al. and El Haddad et al., both reported a worse survival among cancer patients [6,17].

Our report is the second one from Saudi Arabia, albeit from a different geographical area. It shows different results to what was reported previously, reflecting the divergent frequency of the underlying diseases from a different population.

Our is a single-center, retrospective cross-sectional study. Certain variables, such as serological tests or clinical characteristics were not systematically recorded. Higher percentage of patients with cancer was included likely because the hospital has a large oncology tertiary care centre. Our patient population might not necessarily be representative of the region population due to selection bias. Besides, the total number was relatively small.

The majority of patients with large pericardial effusions necessitating drainage, in our study, are due to cancer. Malignant pericardial effusion carries a poor long-term prognosis. Extensive multicentre studies are required to compare populations, and ascertain causes relevant to each geographical area.

© Copyright 2020
Albugami et al. This is an open access article distributed under the terms of the Creative Commons Attribution License CC-BY 3.0., which permits unrestricted use, distribution, and reproduction in any medium, provided the original author and source are credited.

Table 6: Correlation between malignancy and outcomes after pericardiocentesis