The present article aimed to analyze and describe the relationship between cognitive impairment and the perception of quality of life. The study was carried out in the psychiatric hospital within the Ecuadorian “Instituto de Neurociencias,” with 50 patients, both men and women, between the ages of 18 and 65 years. An instrument for the screening of cognitive impairment in psychiatric patients, a questionnaire that measures quality of life, and a sociodemographic questionnaire were applied individually. Data collection took between 30 and 40 minutes per person. The results obtained allowed to verify the relationship between cognitive deterioration and quality of life. First, it was shown that while there was greater cognitive impairment, the perception of quality of life was low and vice versa. It was found that the areas of verbal learning, processing speed, and working memory are those that present greater difficulty for patients with this disorder.

Within the study of psychiatric and psychological disorders, one of the pathologies that has had a great transcendence in this area is schizophrenia. The mind and the brain are so fundamental to the human being that any disturbance in their functioning can cause consequences in most areas where a subject develops. Approximately 1% of the population suffers from this disorder, but the risk of suffering from it is 0.2%-2% in the general population [1]. Schizophrenia is a problem that should be studied in greater depth since, in developed countries, "it occupies the fifth place in the list of disorders associated with severe disability" [2] while the World Health Organization (WHO) reports that 50% of people with this diagnosis cannot access adequate treatment and that 90% of people with schizophrenia live in underdeveloped countries [1].

In Ecuador, there are several studies focused on mental health, but there are no actual studies on schizophrenia. Most of them focus on quantifying and maintaining statistical data on mental pathologies, but there is no interest in investigating other aspects of these patients or even the consequences of such diagnosis, especially cognitive impairment and life quality.

It is suggested that patients with schizophrenia have cognitive impairment, with a greater deficit in attention, memory, and executive functions than the general population. The levels of deterioration vary greatly between patients but the constant is the presence of deficit. This deficit seems independent of circumstances beyond the disease such as medication or institutionalization [3].

Negative symptoms, psychiatric comorbidity, and the side-effects of drug treatment are factors that negatively influence the life quality (LQ) of people with schizophrenia. “Regarding the type of drug, atypical antipsychotics are chosen, rather than the typical ones, because they have a greater contribution to the approach of positive and negative symptoms, which contributes to an increase in LQ” [4]. Adherence with treatment and the cost of constant medical-psychological care for people with low income are factors that can decrease their LQ and, even when there are no resources, lead to a relapse of symptoms.

This article states as a hypothesis the fact that there is a considerable relationship between cognitive impairment and life quality in patients suffering from the disease. There are researches about cognitive impairment or quality of life in these cases but not one that encompasses the two fields. For this reason, 50 patients diagnosed with schizophrenia (paranoid, residual, and catatonic, among others), both female and male, between 18 and 65 years of age, who are in the psychiatric hospital of the Ecuadorian Instituto de Neurociencias (Institute of Neurosciences) were chosen as the universe for this article.

The objective of this research was to contribute relevant data on the level of global cognitive impairment in schizophrenic patients and correlate it to aspects related to their life quality. The methodology used focuses on the use of validated scales and tests to obtain and gather reliable data on the subject to be evaluated. Among these evaluation instruments, there is a sociodemographic questionnaire, the Screening of Cognitive Deterioration in Psychiatry (SCIP), and the World Health Organization Quality of Life (WHOQOL).

Early diagnosis, pharmacological and psychotherapeutic monitoring, relapse prevention, and family, social, and work support could reduce cognitive impairment and increase life quality in patients with schizophrenia. In turn, this would allow fostering interpersonal relationships, self-reliance, and self-confidence in these patients and thus allow a greater contribution to their personal and their country´s development.

This is a cross-sectional, quantitative, correlational, and descriptive study. The population of the study involved 50 schizophrenic patients who are hospitalized in the psychiatric hospital of the Ecuadorian Instituto de Neurociencias (Institute of Neurosciences) between the months of September and November 2016. The project was presented to Espíritu Santo University in Ecuador for its evaluation by an ethics committee, and after its approval, it was sent to the Neuroscience Institute of Guayaquil for permission. Data collection was carried out with the prior authorization of the research and teaching directors of the mentioned institute, and informed consent was granted by the participating patients. Patients with the diagnosis of schizophrenia or one of its subtypes (paranoid, residual, catatonic, and so on) were chosen. Of these chosen patients, 50 participants were selected through non-probabilistic sampling (25 women and 25 men); their ages were between 18 and 65 years old. Three instruments were applied to the participants: a questionnaire (age, sex, education, employment status, diagnosis time, number of admissions, and so on), a test that measures cognitive impairment in psychiatric patients (SCIP-S), and the Instrument of Evaluation of Quality of Life of the World Health Organization (WHOQO-BREF).

The SCIP-S is a cognitive screening test specifically developed to detect the main cognitive deficits that people with some type of mental illness develop [5]. It consists of five sub-tests, which measure memory, attention, processing speed, and executive function. The results generate a cognitive profile of the patient in addition to an overall score, which is the one used to correlate the data.

The WHOQOL-BREF is an instrument designed for the evaluation of the perception of life quality, within the cultural context and value system in which people live, together with their objectives, goals, and interests. The short version was used because for the population evaluated, the instruments to be used should be of short duration.

Data were collected anonymously, signing an informed consent form. The objective of the investigation, the content of the instruments, and the application were explained. The total time per person was approximately 30 to 40 minutes. After data collection, statistical descriptive tables on cognitive impairment and life quality were developed in patients diagnosed with schizophrenia.

Fifty participants were studied (25 women and 25 men). The average age was 41.5 years, with the youngest patient being 18 and the oldest being 65. Regarding the type of schizophrenia presented, 22 (44%) were classified as paranoid schizophrenia, 14 (28%) as undifferentiated, eight (16%) had a diagnosis of residual schizophrenia, five (10%) as hebephrenic, and one (2%) patient was hospitalized with the diagnosis of unspecified schizophrenia (Table 1).

Table 1: Characteristics of patients diagnosed with schizophrenia included in this study

Table 2: Areas of cognitive evaluation and their scores

Regarding the level of schooling and its relationship with cognitive impairment, it can be observed that the majority of patients who completed primary studies or any type of education lower than primary schooling obtained a “very low” score (43%), the scores of “medium high ”(0%) and “high ”(0%) were not obtained. Whereas, of the patients who completed high school or higher studies, they obtained mostly 45%, a “medium” score; the “high” score (0%) was not obtained (Figure 1). 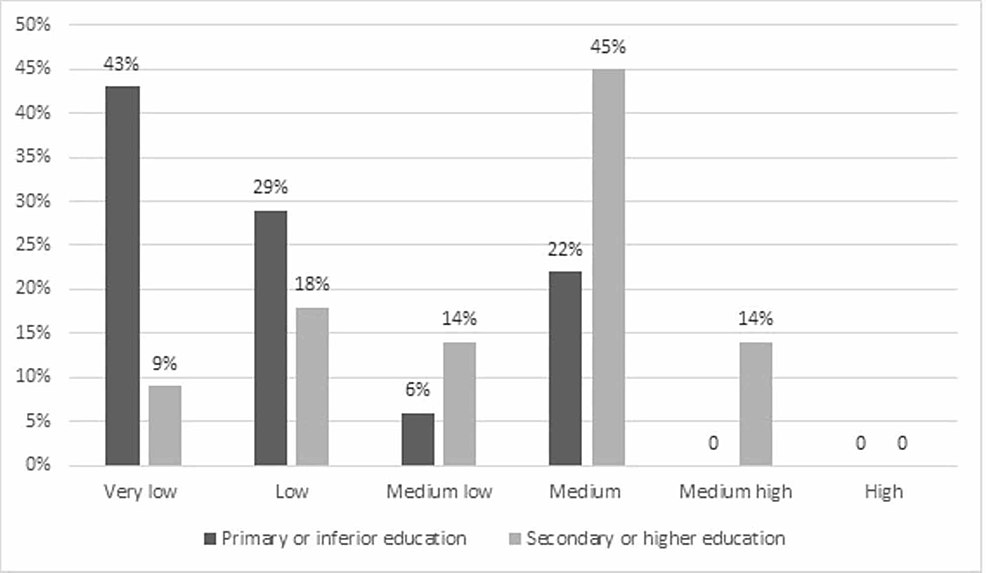 Figure 1: Bar graph of the relationship between schooling and cognitive impairment 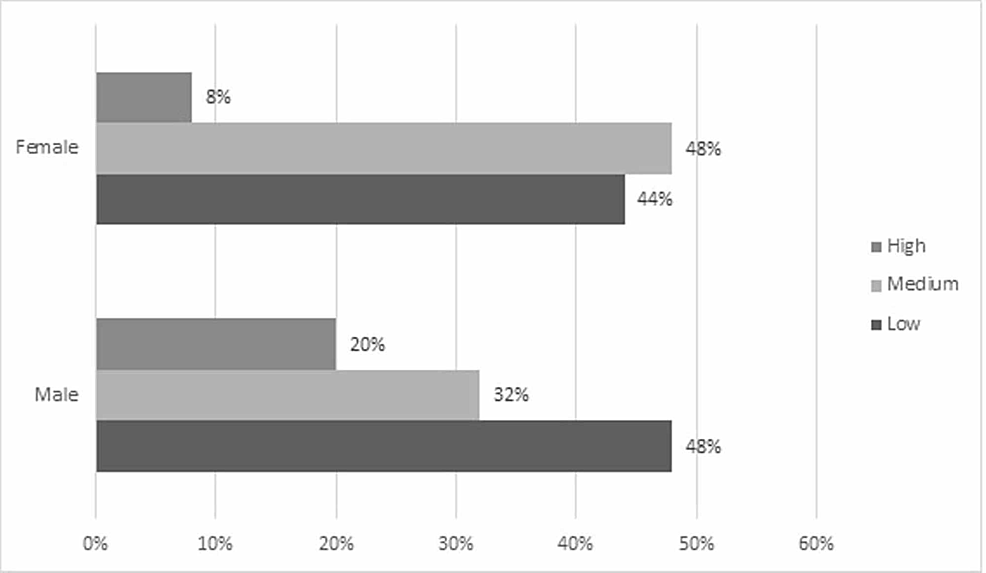 Figure 2: Bar graph of the percentage of perception of life quality according to sex

Through this study, important relationships between cognitive impairment and life quality were found. First, cognitive impairment has a significant influence on life quality. As mentioned, as more cognitive deterioration occurs, life quality will decrease and vice versa. Second, it was observed that verbal learning, processing speed, and working memory were the most affected cognitive areas. Finally, the importance of the presence of a primary caregiver for schizophrenic patients was determined, as it is one of the critical points that affect their quality of life.

Caron et al. described that the increased well-being and quality of life in people with schizophrenia were related to higher levels of education [7]. This finding is consistent with ours.

Finally, Caqueo-Urízar et al. presented a bidirectional association between the presence of a caregiver in the quality of life of schizophrenic patients, showing that good quality of life in the caregiver affects the patient positively and vice versa. The study also indicated that the involvement of the family in the patients' lives has a positive impact on their quality of life [8].

According to our study, quality of life in schizophrenic patients is inversely proportional to the degree of cognitive deterioration. The factors that affect the quality of life of these patients positively include higher levels of education, the presence of a caregiver, and low levels of cognitive impairment. We recommend that patients receive care from a family member in order to slow the deterioration of quality of life and cognitive impairment, as it has been shown that it affects the patient's development positively. However, more studies are needed to correlate this disease with other characteristics.

© Copyright 2020
Avila et al. This is an open access article distributed under the terms of the Creative Commons Attribution License CC-BY 3.0., which permits unrestricted use, distribution, and reproduction in any medium, provided the original author and source are credited.

Figure 1: Bar graph of the relationship between schooling and cognitive impairment

Figure 2: Bar graph of the percentage of perception of life quality according to sex

Table 1: Characteristics of patients diagnosed with schizophrenia included in this study

Table 2: Areas of cognitive evaluation and their scores