Rheumatoid arthritis (RA) is a chronic inflammatory systemic disease characterized by bilateral involvement of mostly small joints of hands and feet. There can be various extra-articular manifestations of the disease including lung parenchymal disease. Pulmonary involvement in RA patients leads to increased morbidity and mortality. The overall burden of RA related pulmonary disease is underestimated due to the limitation of resources in underdeveloped countries. High-resolution computed tomography (HRCT) is an important tool used to diagnose different abnormalities in RA related interstitial lung disease (ILD). The objective of the study was to evaluate HRCT findings in patients of RA related ILD and categorize the radiological findings according to clinical findings.

This descriptive prospective observational study was conducted at Mayo Hospital, Lahore from June 2014 to June 2015. Patients of RA suspected of lung disease after selection underwent HRCT chest on 128-slice Hitachi CT scanner (Hitachi Global, Tokyo, Japan) in the radiology department. Images were reconstructed and evaluated by experienced radiologists. Findings were recorded on a questionnaire. Data was analyzed on SPSS version 21 (IBM Corp, Armonk, US).

Out of the 54 patients scanned, interlobular septal thickening was the most common finding found in 22 of the patients. Ground-glass opacification was recognized in 21 patients, honeycombing in nine and bronchiectasis in two patients. Regarding zonal predilection of disease pattern, lower zones of lungs were found involved in most of the cases. The disease was found to be bilateral in 15 patients. Based on these findings, usual interstitial pneumonitis (UIP) was diagnosed in six patients and non-specific interstitial pneumonitis (NSIP) in 14 others.

Rheumatoid arthritis (RA) is a chronic inflammatory systemic disease exhibiting clinical signs and symptoms of predominantly joint disease [1-3]. This disease is characterized by symmetrical bilateral involvement of mostly small joints of hand and feet; however as it leads to chronic synovitis, all joints may be involved [4-5]. There can be various extra-articular manifestations (EAM) of the disease e.g. upper airway, lower airway, pleural, vascular and lung parenchymal disease, etc. [6-8]. The overall burden of RA related pulmonary disease is underestimated due to the limitation of resources in underdeveloped countries [9]. Prevalence of interstitial lung disease (ILD) was found to be 97.9% per 100000 with more of the secondary ILDs than primary ILD. is around 19-44% [10]. Pulmonary involvement seen in RA patients has high clinical significance as it leads to increased morbidity and mortality [11]. The most important characteristic of RA related pulmonary disease is that almost all anatomical parts of the lung are prone to RA related tissue injury [12]. The overall risk of having ILD in RA patients is 19.2% as compared to the risk of having ILD in the common population [13]. ILD is a spectrum of pulmonary diseases that involve all parts of pulmonary bronchovascular units, including alveolar epithelium, capillary endothelium, alveoli, perivascular connective tissue, and perilymphatic tissues. RA is only second to systemic sclerosis as far as the incidence of ILD in connective tissue disorders is concerned [14]. The natural history of ILD is not very well defined in patients. Complications may arise themself or secondary to immunosuppressive drug treatment. High-resolution computed tomography (HRCT), that emerged during the past decade, is an important tool to diagnose the different abnormalities in RA related ILD.

Altogether 54 cases were studied to complete the sample size of the project. Out of the 54 patients, 18 (33.33%) were male, while 36 (66.67%) were female. The mean age of the patient was 44.17± 11.315 years, with the minimum age being 15 years and the maximum age being 65 years. Patients had a variable presentation, and the commonest presentation to the hospital was exertional dyspnea (Table 1).

Regarding the findings of HRCT, interlobular septal thickening was the most common finding, present in 22 (40.7%) patients. Similarly, ground-glass opacity (GGO) was present in 21 (38.9%) patients, while nine (16.7%) patients had honeycombing (Table 2).

Table 3: Descriptive statistics of the HRCT findings in unilateral and bilateral involvement of the right and left lung

Table 4: Descriptive statistics of the HRCT findings in term of zone involved among patients with early rheumatoid arthritis

Based on these patterns of involvement of the lung, usual interstitial pneumonia (UIP) was diagnosed in six (11.1%) patients (Table 5). Similarly, non-specific interstitial pneumonia (NSIP) was diagnosed in 14 (25.9%) of the patients. Findings of HRCT that did not fall under any defined category were labeled as others, as were present in five (9.3%) patients.

Table 5: Frequency distribution of the HRCT diagnosis in patients with early rheumatoid arthritis

The present study indicates that females are at increased risk of RA with the statistical odds of (66.67% vs. 33.3%). The results of this study are comparable with the study by Gabbay E et al. that demonstrated females to be at an increased risk of RA (69.44%) [16]. El Khalik KA et al. found that RA was more common in females than in males (79.4% vs. 20.58%) [17]. This disparity may be due to bias in the selection of women. The present study provides evidence that RA patients were older individuals of 44.17 ±11.315 years. Gabbay E et al. demonstrated that RA was more commonly found in older patients 51.8 ±16.0 years [16]. Affara NK et al. examined RA patients to be 52.6 ± 5.1 years old [18]. The discrepancy in the mean age of the patients in our study may be present due to the small sample size. 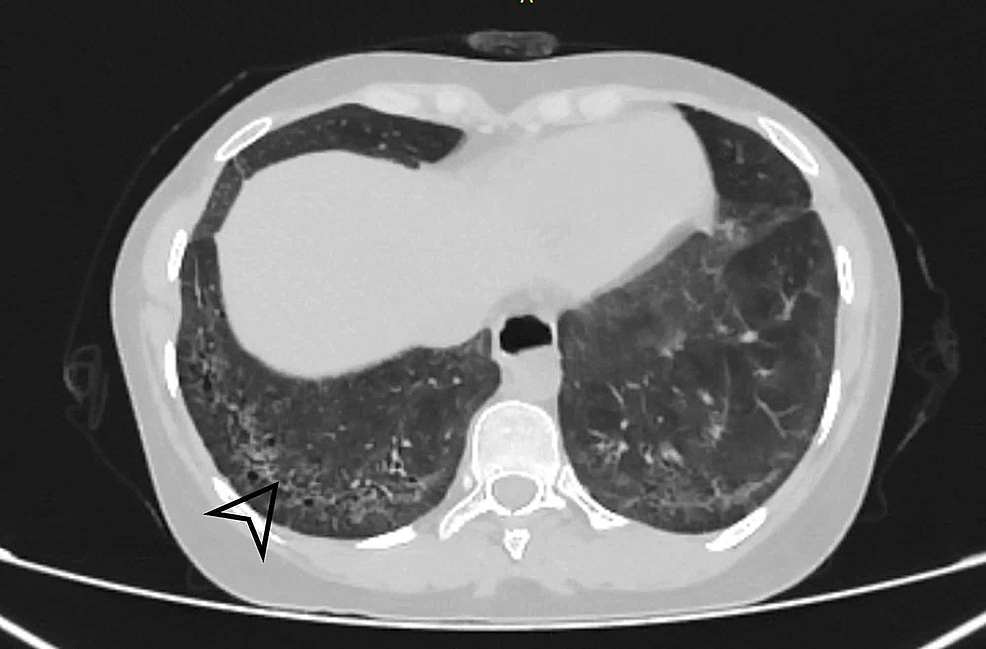 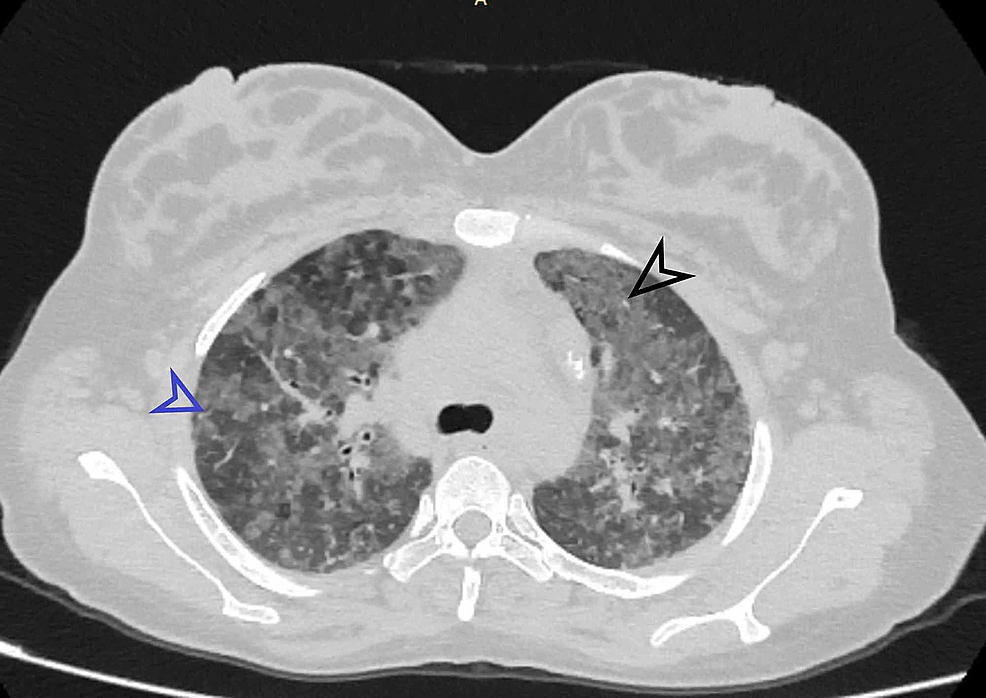 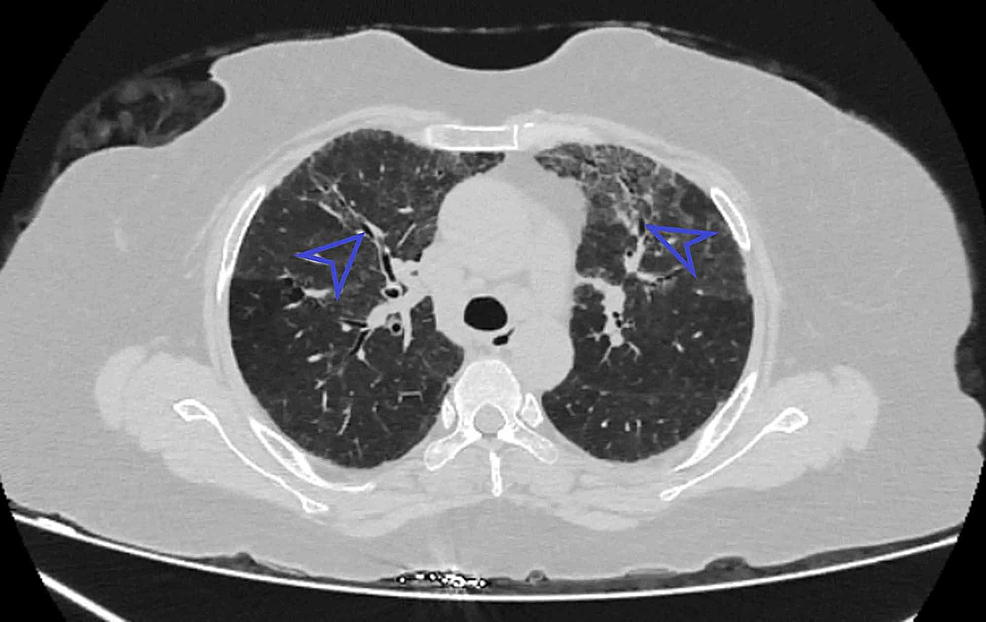 Metafratzi ZM et al. .used normal healthy individuals as control against known patients of RA [19]. They used a semi-quantitative grading system, which has also been described in the past. The presence and extent of findings on HRCT chest were coded according to lung zones bilaterally, making a total of six zones. Only air trapping was given a score of eight on its presence on paired inspiratory and expiratory images. The control subjects showed minimal findings with scores of less than 3.6. The most common findings were air trapping and bronchiectasis. The abnormalities noticed in patients were equal to a score of 5.2 (moderate in severity) with only air trapping having a score of 14 (maximum severity). Other findings were bronchiectasis, bronchial wall thickening, macro nodules, and GGO.

Chansakul TN, in their study, concluded that traction bronchiectasis and the extent of honeycombing (as our earlier findings illustrated in Figures 4-6) were strongly associated with morbidity and mortality [20]. RA related ILD carried a bad prognosis when they compared HRCT findings to pulmonary function tests. They also completely evaluated patients’ intrathoracic noncardiac findings on CT scans in terms of pleural, parenchymal, vascular disease as well as drug-related complications and opportunistic infections. They found that UIP (illustrated in Figure 5) was commoner than NSIP. There was more overlap between NSIP and UIP patterns. 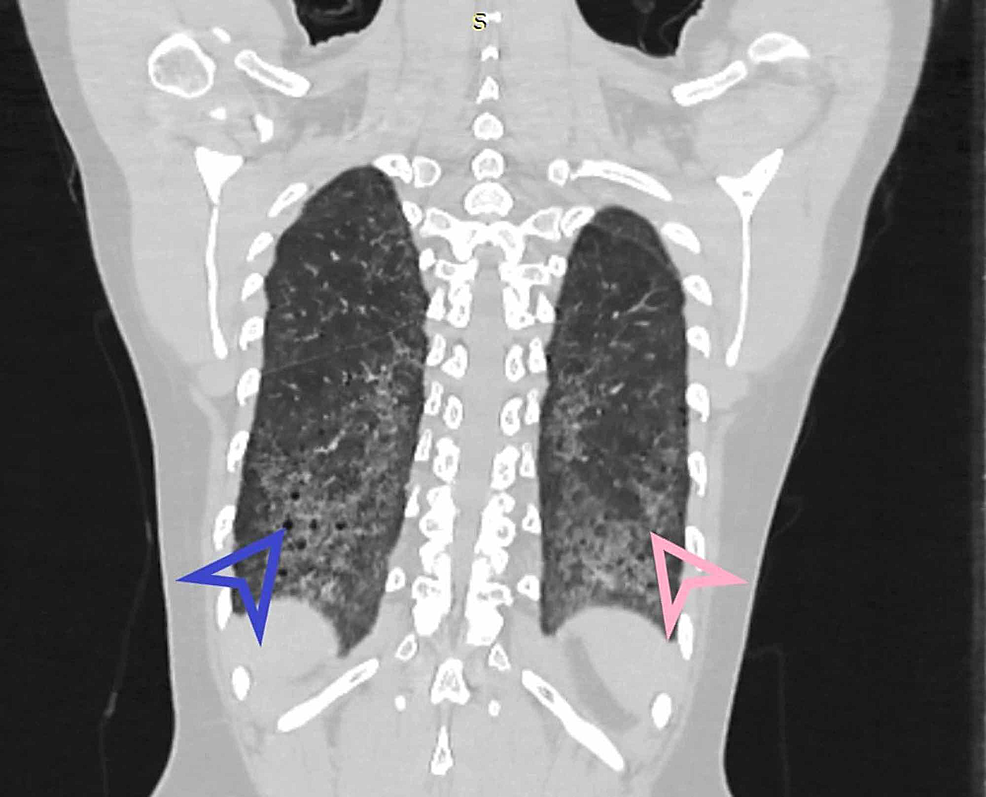 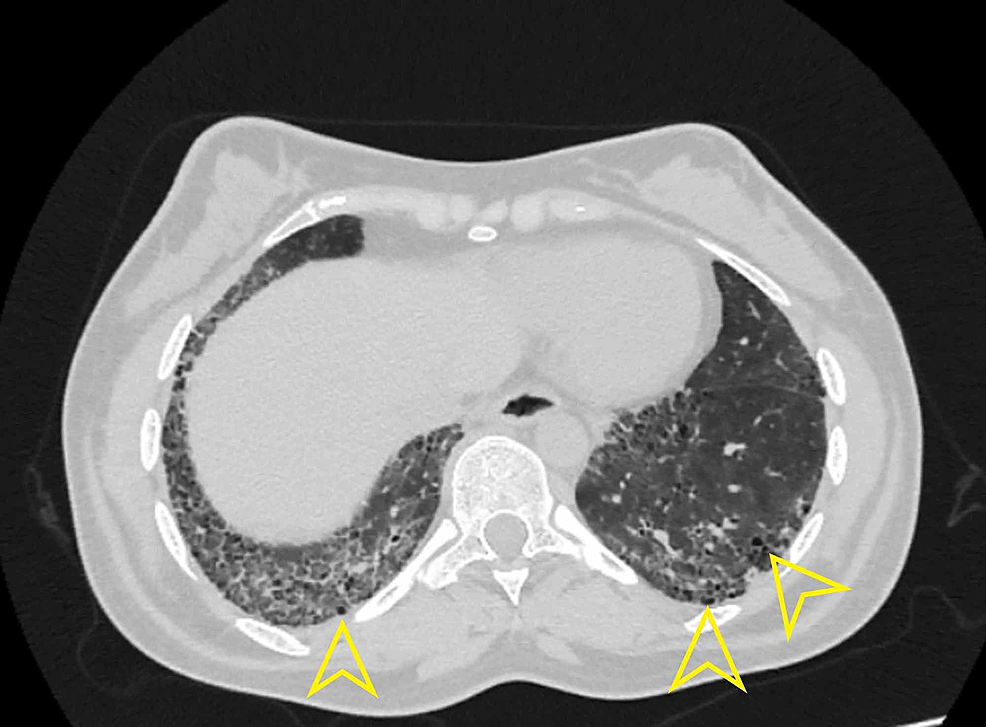 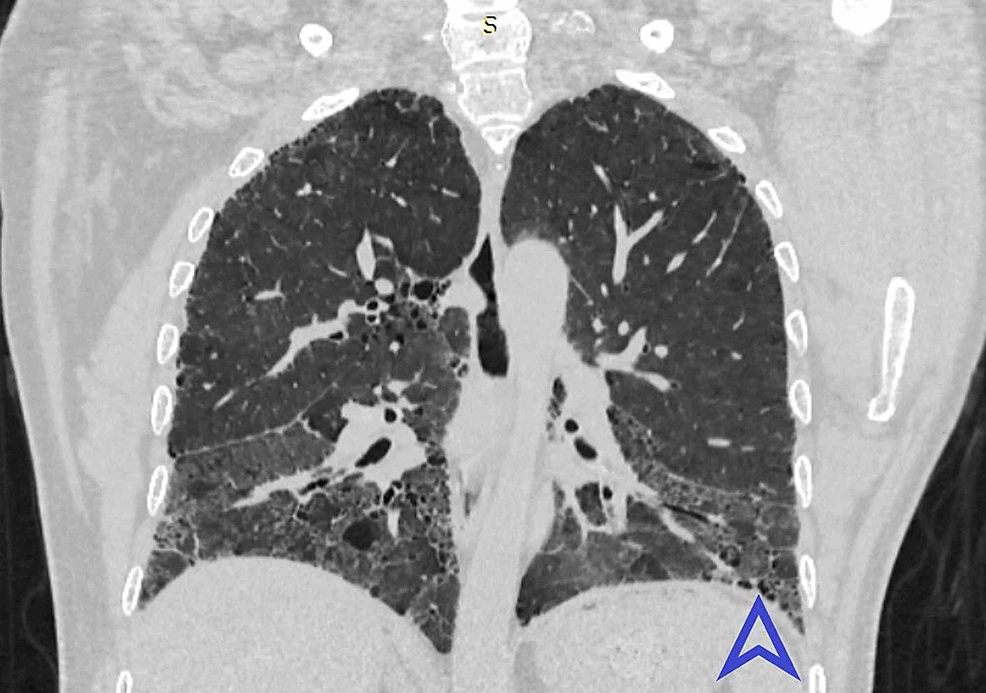 Multiple pulmonary manifestations of RA are well known. Investigation for ILD is mandatory for evaluating the clinical progression of RA. HRCT detects subtle abnormalities in RA patients even without respiratory symptoms. Thus, HRCT is the investigation of choice to delineate in detail the bronchovascular involvement and disease patterns of the lungs in patients of RA.

Human subjects: Consent was obtained by all participants in this study. Institutional Review Board of King Edward Medical University, Lahore issued approval 476/RC/KEMU. The Synopsis of Dr. Mahesh Gautam, PG Trainee - MD Diagnostic Radiology, Department of Radiology, King Edward Medical University was presented before the Institutional Review Board for ethical approval. The committee after discussion approved the synopsis and found it appropriate and awarded the study ethical approval. Animal subjects: All authors have confirmed that this study did not involve animal subjects or tissue. Conflicts of interest: In compliance with the ICMJE uniform disclosure form, all authors declare the following: Payment/services info: All authors have declared that no financial support was received from any organization for the submitted work. Financial relationships: All authors have declared that they have no financial relationships at present or within the previous three years with any organizations that might have an interest in the submitted work. Other relationships: All authors have declared that there are no other relationships or activities that could appear to have influenced the submitted work.

© Copyright 2020
Gautam et al. This is an open access article distributed under the terms of the Creative Commons Attribution License CC-BY 3.0., which permits unrestricted use, distribution, and reproduction in any medium, provided the original author and source are credited.

Table 3: Descriptive statistics of the HRCT findings in unilateral and bilateral involvement of the right and left lung

Table 4: Descriptive statistics of the HRCT findings in term of zone involved among patients with early rheumatoid arthritis

Table 5: Frequency distribution of the HRCT diagnosis in patients with early rheumatoid arthritis