A bone fracture is a medical condition in which there is a partial or complete break in the continuity of the bone. One of the factors causing bone fractures is Road Traffic Accidents (RTAs), which is the first leading cause of death among people aged 15-29 years. This study aimed to determine the incidence of bone fractures among RTAs in Buraidah Central Hospital and to identify associations between gender, age, and fractures.

This is a retrospective study and review of patients’ medical records in Buraidah Central Hospital, of those who had an RTA in 2018 and 2019. The information taken included age, gender, and type of fracture. All patients with RTAs in the period between January 2018 and October 2019 were recruited and data were collected from patients’ medical records. The data analysis was carried out using Statistical Packages for Software Sciences (SPSS) version 21 (SPSS, Chicago, IL, USA).

There were 301 incidences of RTAs with fractured bones presented at Buraidah Central Hospital during the study period. Bilateral or multiple was the most commonly known sites of fractures. We also observed that the most commonly fractured bone among males was the femur (28.2%) while a humerus fracture was the most common among females (20.8%). Males were significantly higher in the younger age group (p<0.001). Additionally, the radius shaft was more associated with the younger age group (p=0.043) while the femur was more associated with the oldest age group (p=0.013).

According to the World Health Organization (WHO), road traffic accidents (RTAs) are the first leading cause of death among people aged 15-29 [1]. It is also predicted that motor vehicle accident injuries would be the sixth commonest leading cause of death by the year 2020 and the fifth leading cause by 2030 [2-3]. In Saudi Arabia, road traffic accidents are considered a major health hazard leading to injuries and death; between 1971 and 1997, 564,762 people were injured or died in a motor vehicle accident in Saudi Arabia [4]. Recent statistics from the Ministry of Interior - General Directorate of Traffic show that the total number of traffic accidents is 352,464, which reflects a dangerous impact on the patient's health and economic status [5]. In this study, we aimed to find the incidence of bone fractures among RTA patients in Buraidah Central Hospital (BCH), identify the types of fractures, and identify associations between gender and age.

This study is a single-institution study conducted at Buraidah Central Hospital in Qassim, Saudi Arabia. It is a retrospective study and reviews the medical records of patients who were admitted to the hospital and had a fracture following an RTA in the period between January 2018 and October 2019. The information collected includes demographic data (age and gender), type of fracture, and mode of injury. The data collected were analyzed using descriptive statistical measures such as frequency distribution and percentages. The comparison between gender, fractured bones, and site of fracture among age groups has been conducted using the chi-square test. A p-value of <0.05 has been considered statistically significant. All data analyses were carried out using Statistical Packages for Software Sciences (SPSS) version 21 (SPSS, Chicago, IL, USA). 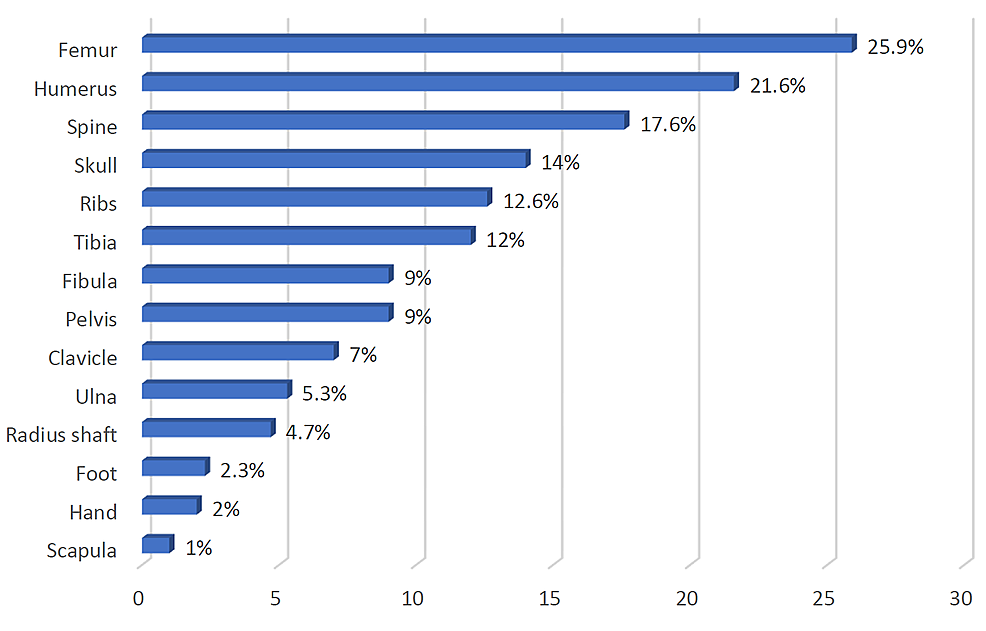 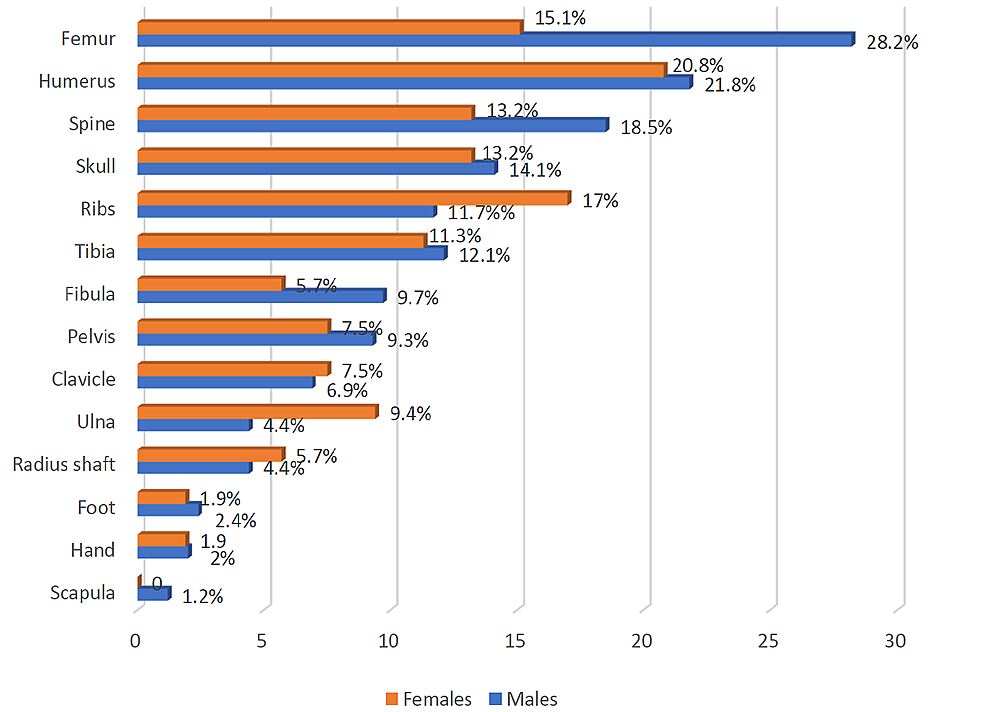 Figure 2: Comparison of fractured bones among males and females

This study sought to determine the incidence of bone fractures among RTA cases at Buraidah Central Hospital. In this study, a total of 301 cases of RTAs were determined in a two-year period (years 2018-2019) and the majority of the victims were in the 21-30-year-old group (36.5%). This report is in accordance with a paper published by Sonbol et al. [6]. They documented that among 591 patients, half (50.4%) were in the 16 to <30-year-old group. This report has been further validated by Kumar [7]. Based on his findings, most victims were young, in the age group of 15-30 years (33.9%), which was consistent with our study outcome. On the other hand, Sadat-Ali et al. [8], when evaluating the epidemiology of fractures and dislocations in urban communities among 1428 recruited patients, found 584 of the patients were victims of RTAs, which was relatively higher than the incidence of RTA in the present study, although the previous study was conducted over a five-year period as compared to our study, which was conducted over an approximately two-year period only. They also reported that the average age of males was 28.9 while the average age of females was 41.6; among them, 40.9% of males were below 40 years old, which was also congruent with our report. Another published study in India [9] reported that the most common age group among 4041 patients who presented with fractures and dislocation was the fourth-decade group followed by the third-decade group, which was not consistent with our study findings.

Males were generally more victims of RTAs than females. In our study, 82.4% of the males were involved in RTAs, which was consistent with the study of Sonbol et al. [6]. They reported that among 591 patients, 78% were males. This has been further supported by Kumar [7], where he accounted that 79.9% of the RTA victims were males, which generally means that RTAs are more associated with males as compared to females.

Finally, when we assessed which factors are more associated with age group, we observed that being a male, a fractured radius shaft and a fractured femur are the factors being concomitant with the age group. In the western region [6], they reported that the tibia and neck were the significant factors for age group, which was not consistent with our study findings, while in Taiwan [9], they reported a significant relation of male gender, older age, low income, and admission to a high-level hospital to the observed fracture patterns, which was incongruent with our study results.

We observed 301 cases of RTAs in a two-year period. Femur fractures were the most commonly known fractures among males while humerus fractures were the most common fractures among females. In males, fractured radius shaft and fractured femur were the factors associated with age group. RTAs account for many orthopedic fractures that cause long hospitalization and increased mortality rates. In this regard, an awareness campaign at the maximum level is necessary for targeting the high-risk group, which is adult males. Furthermore, good maintenance of roads, as well as proper road signs, are also necessary to prevent the occurrence of RTAs. Finally, collective efforts within the government agencies to educate drivers on safe driving are vital for decreasing the high prevalence of RTAs in our region.

© Copyright 2020
Aloudah et al. This is an open access article distributed under the terms of the Creative Commons Attribution License CC-BY 3.0., which permits unrestricted use, distribution, and reproduction in any medium, provided the original author and source are credited.

Figure 2: Comparison of fractured bones among males and females