The epidemiology of distal femoral growth plate injuries is well described. They represent from one to five percent of all physeal injuries, and approximately seven percent of lower extremity injuries; less than one percent of paediatric fractures [2-4]. Most are Salter-Harris type II fractures which occur in adolescents [5].

Fractures involving the distal femur growth plate can have severe implications for children. Complications include malunion, premature closure of part or all of the growth plates with the corresponding angular and/or rotational deformities, or leg-length discrepancies, and neurovascular injuries [4].

Triplane fractures are well described of the distal tibia, distal humerus, distal radius, and the hand [10-14]. To date, only three cases have been reported of triplane fractures in the distal femur in the paediatric population [4, 6, 15]. Only one of these cases involved a female, and only one case had a pre-operative computed tomography (CT) scan performed [4, 15].

Our aim is to add to the scant literature on triplane fractures of the distal femur in the paediatric population. We describe our management and the challenges this case presented to us. In providing more information on triplane distal femoral fractures in the paediatric population, we hope to provide detailed information for surgeons who are planning to repair such fractures in the future.

A 13-year-old girl injured her knee while playing soccer. She tackled a goalkeeper and sustained a direct blow to the right knee. She presented to a local emergency department due to right knee pain and an inability to weight-bear. She underwent assessment by the emergency department staff, had plain film x-rays (Figures 1 and 2), and was referred to the trauma and orthopaedic surgery team on call at our institution for advice, as is the norm for paediatric fractures presenting to this local hospital. 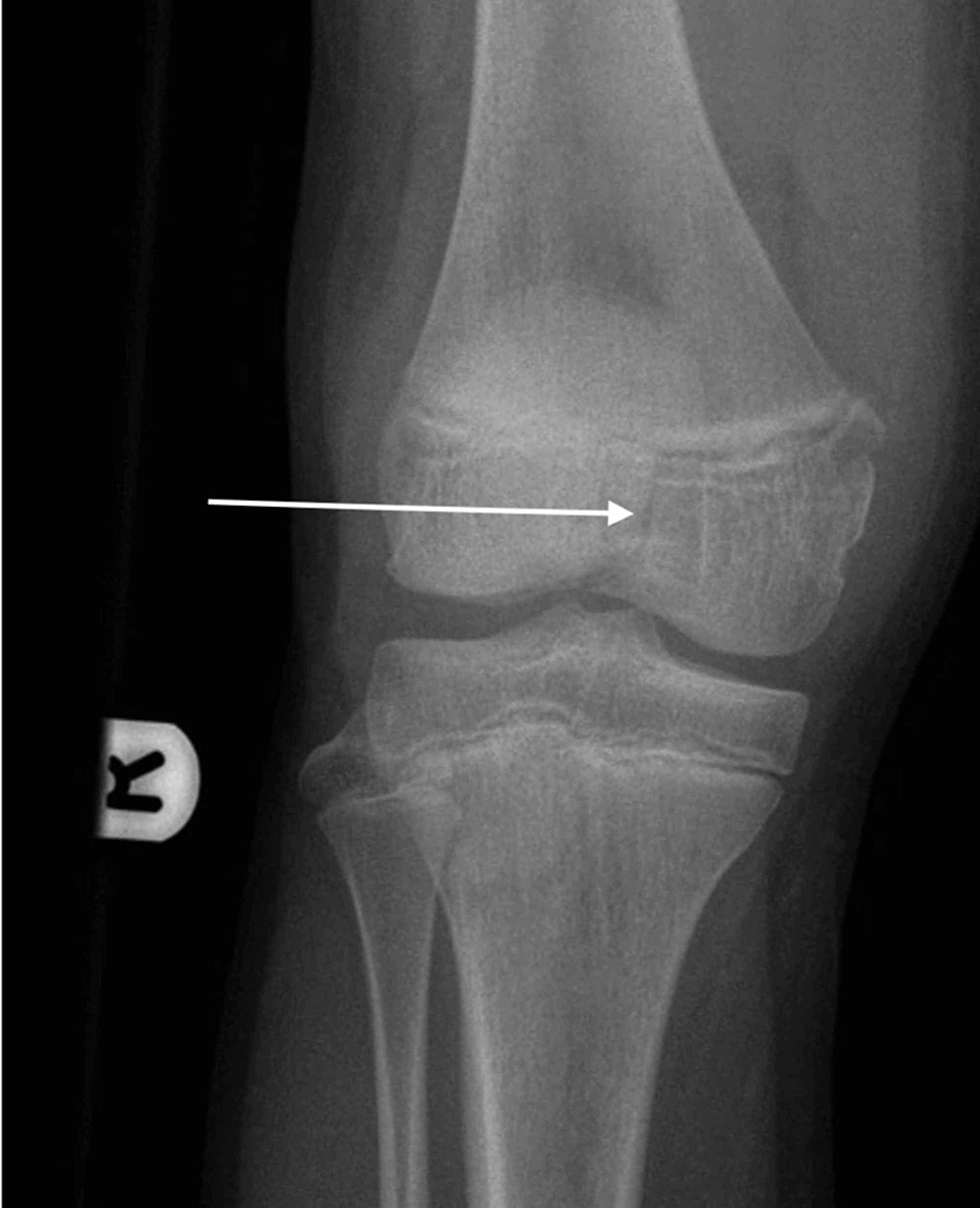 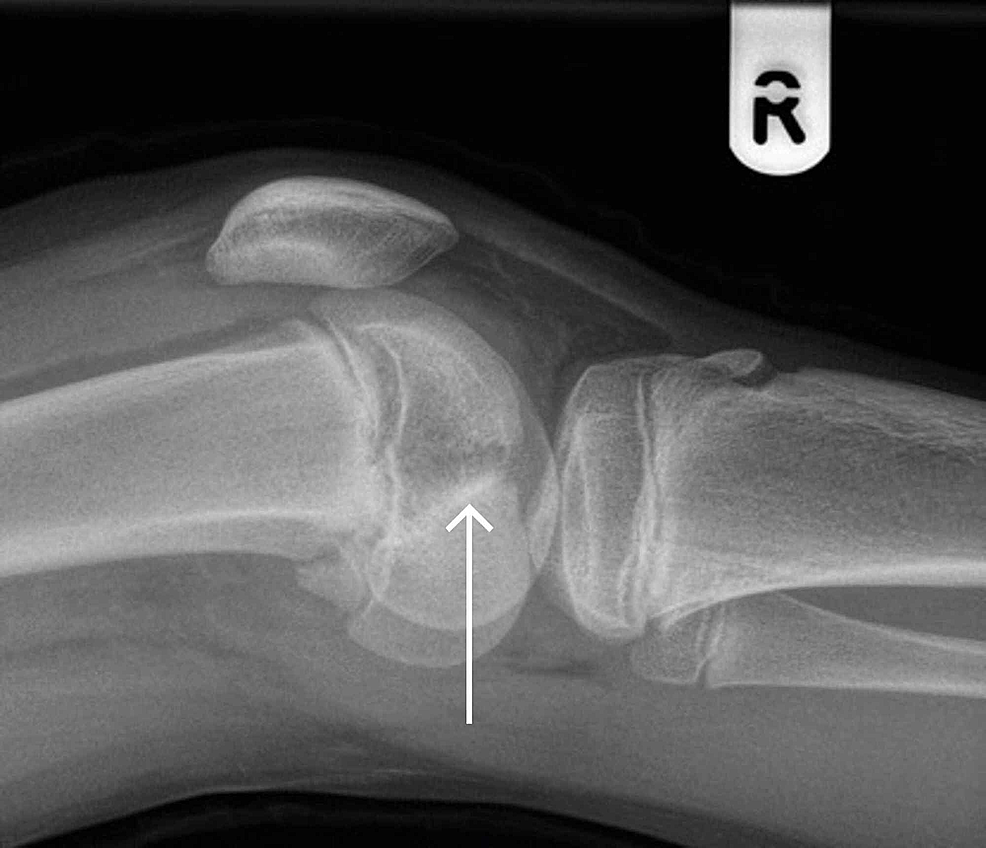 Once it was established that this was a closed fracture and she was neurovascularly intact, her knee was immobilized in an above knee backslab and transferred to our institution immediately. Upon arrival, she was re-assessed and underwent a CT scan (Figures 3-8) for a definitive diagnosis of her right distal femur fracture. This showed a triplanar fracture of her distal femur. 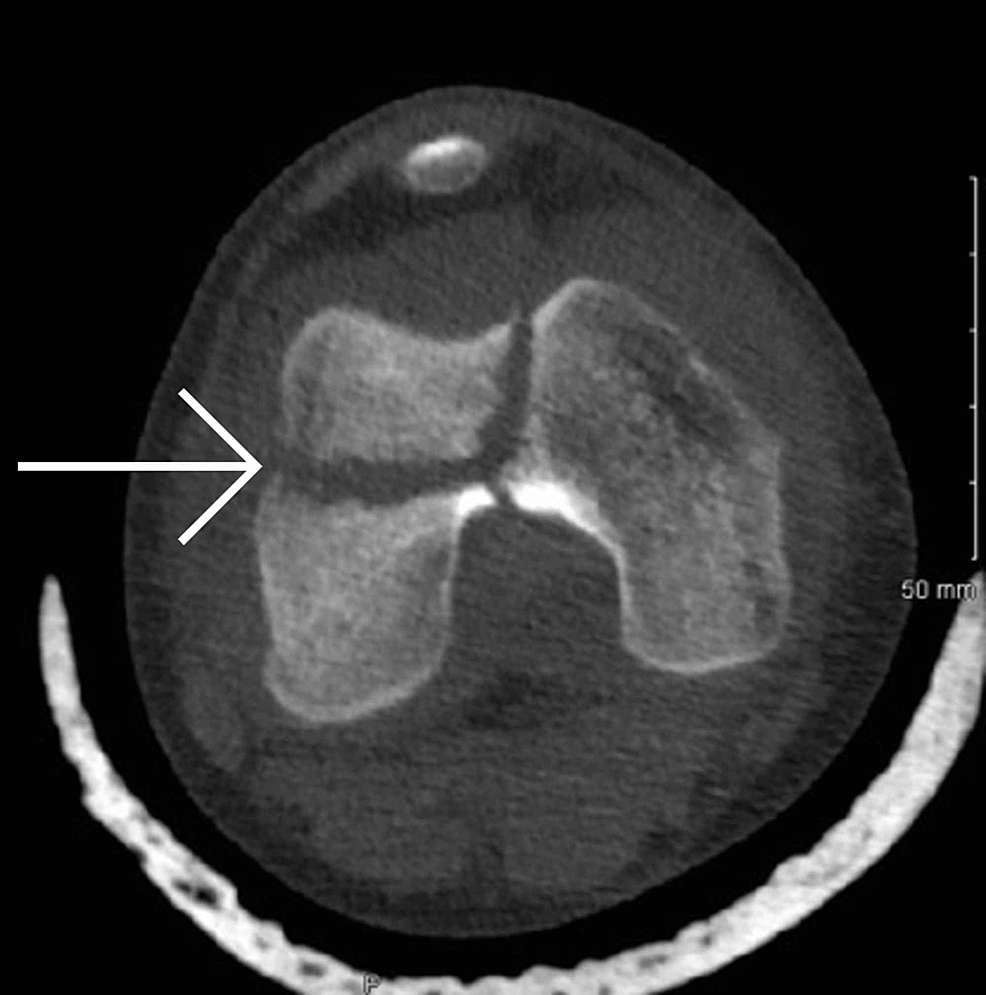 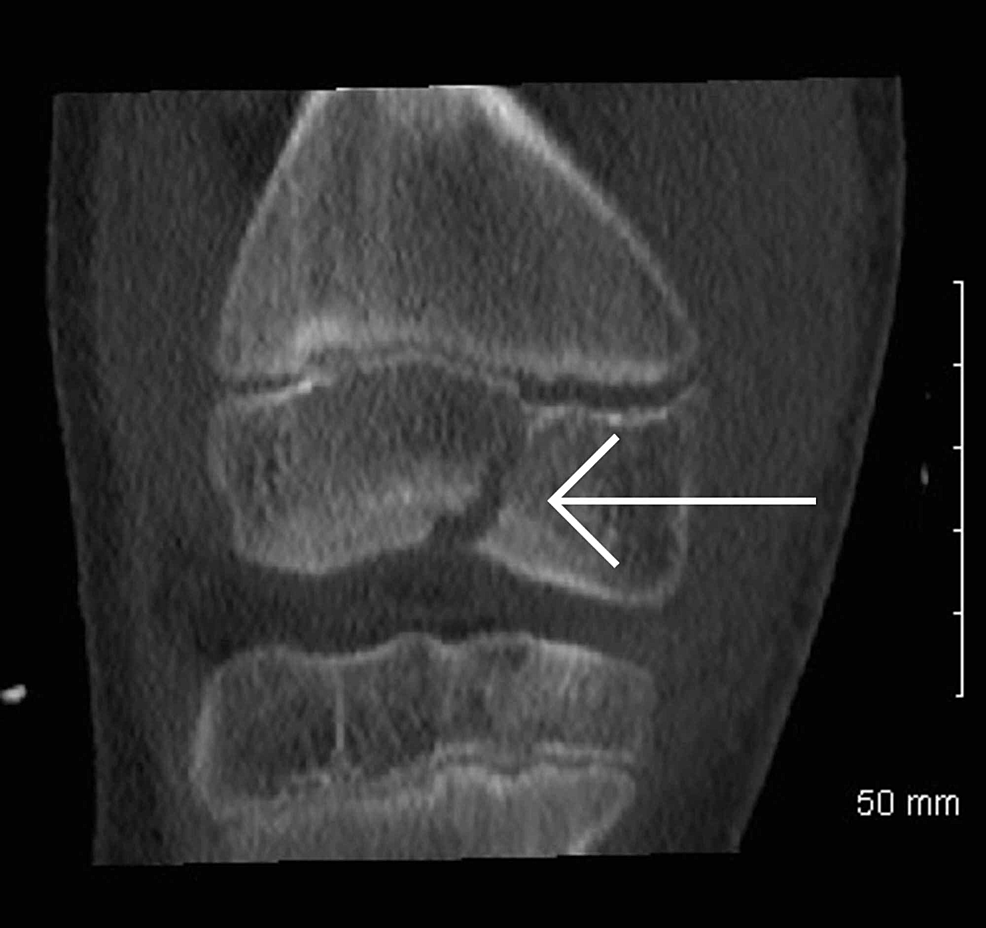 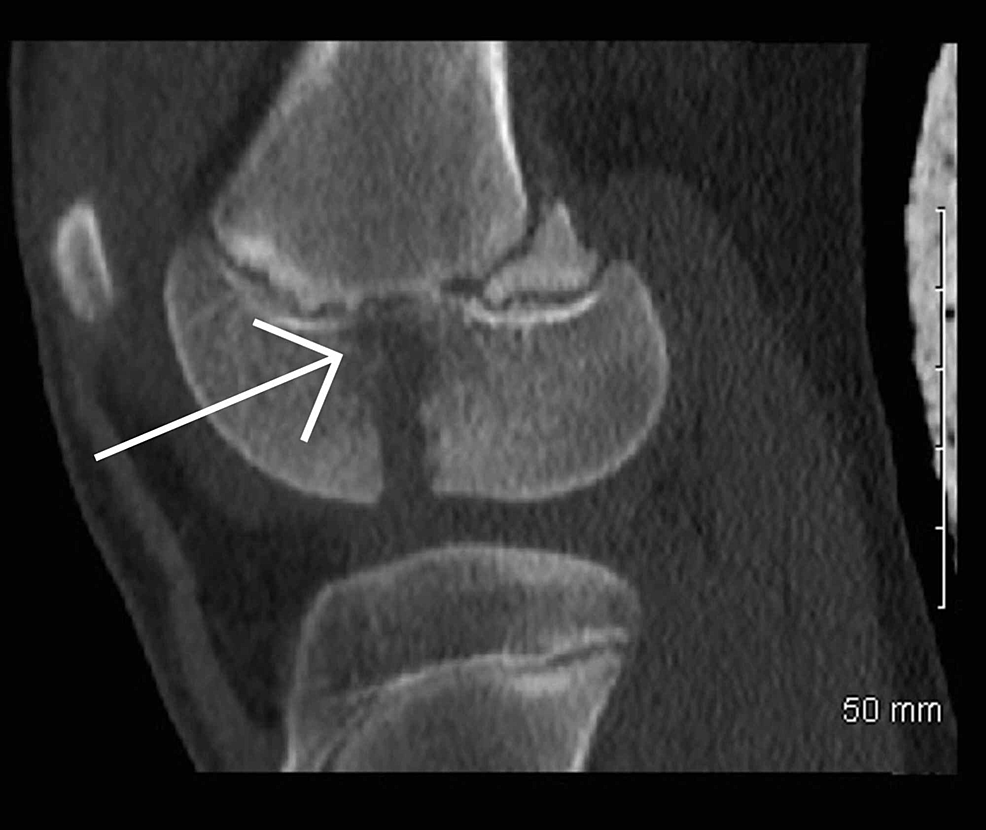 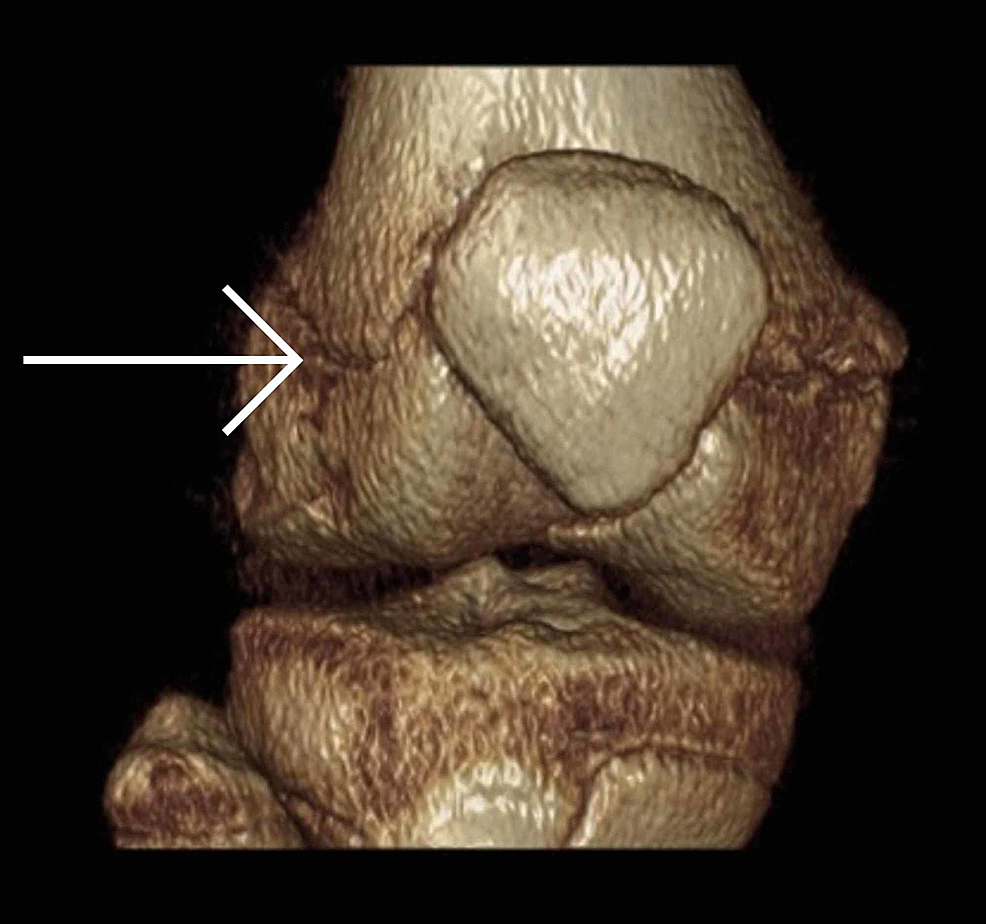 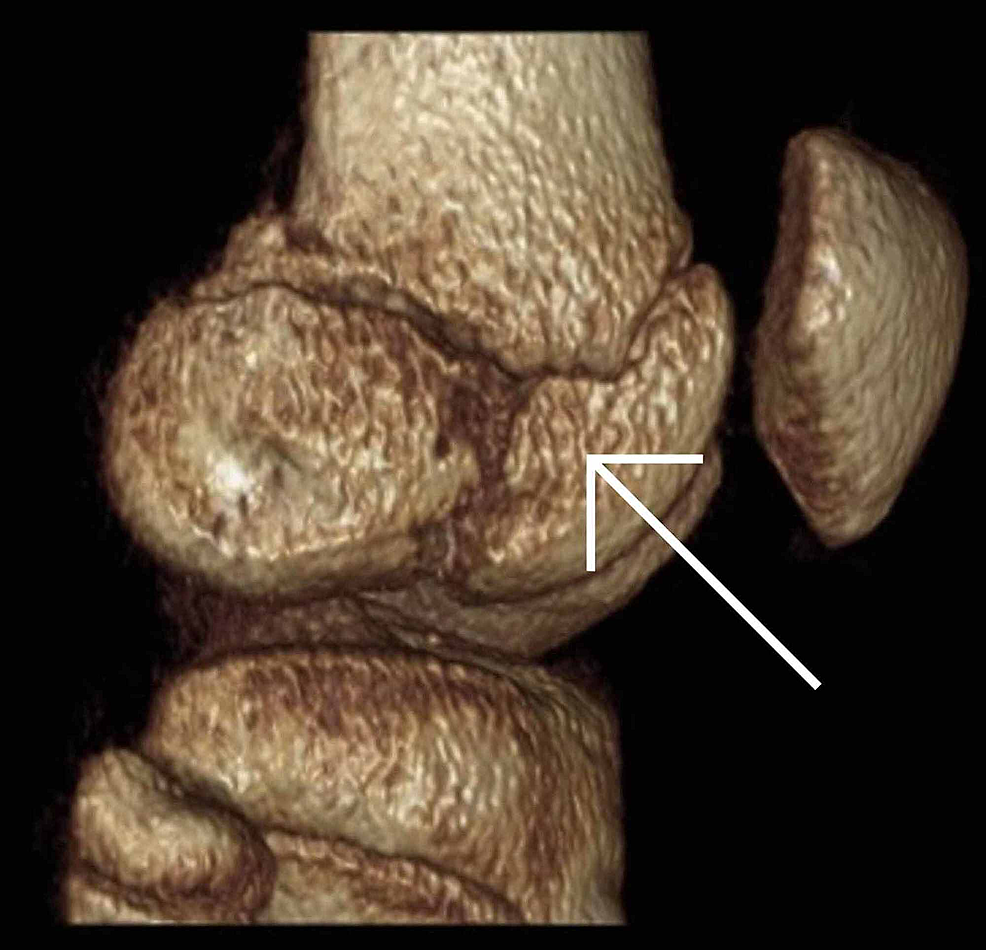 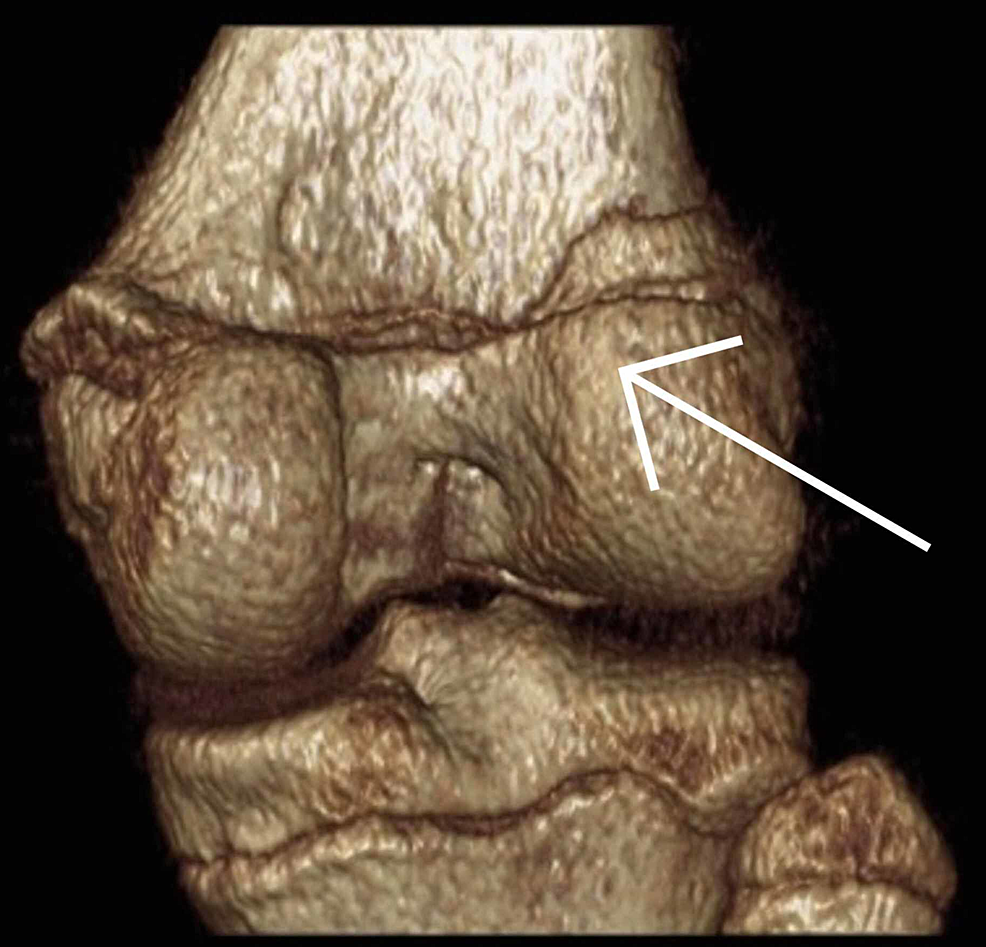 In order to achieve the best possible functional outcome, the trauma and orthopaedic surgery team operated with the goal of anatomical reduction (Figures 9-12). 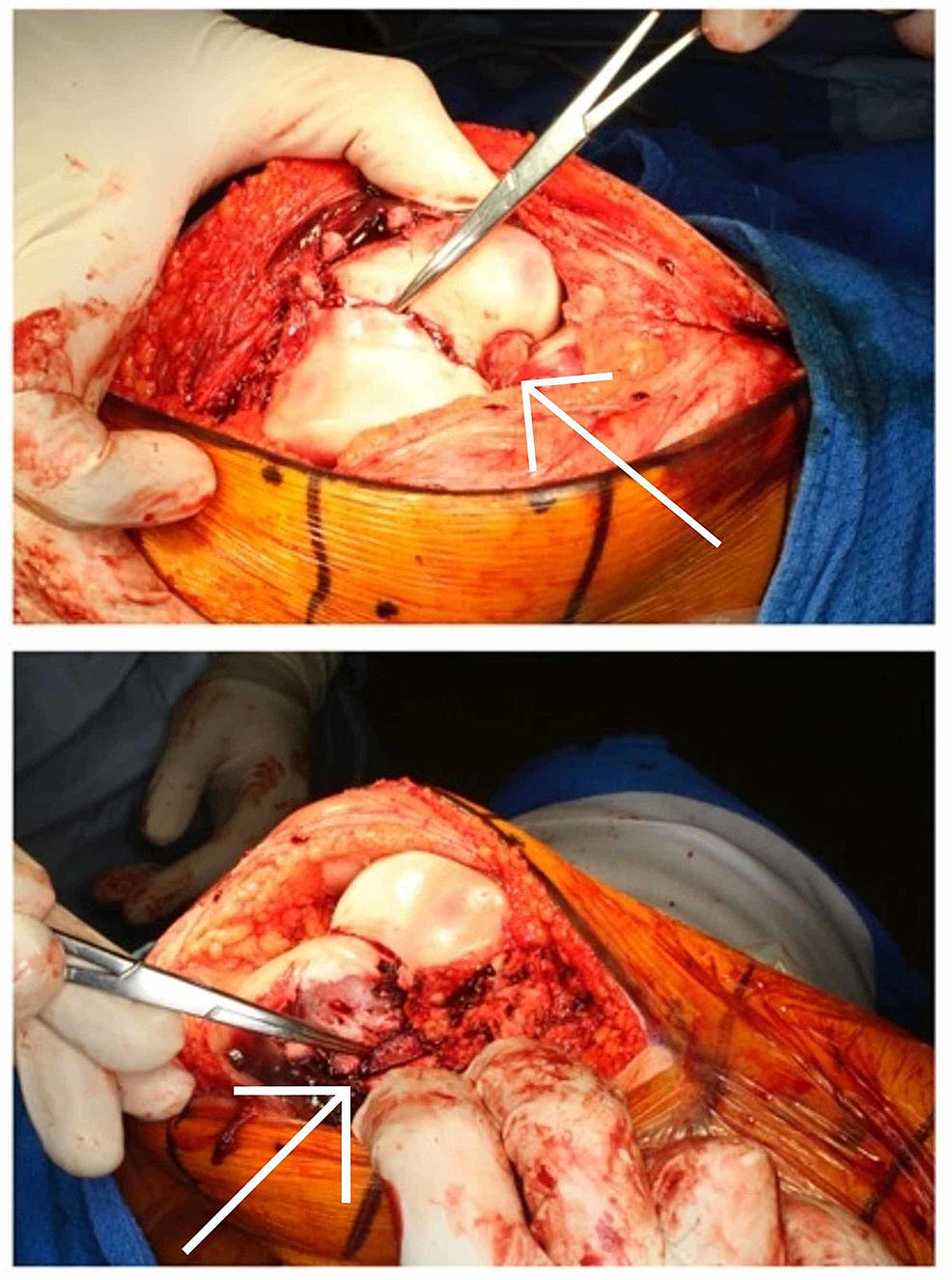 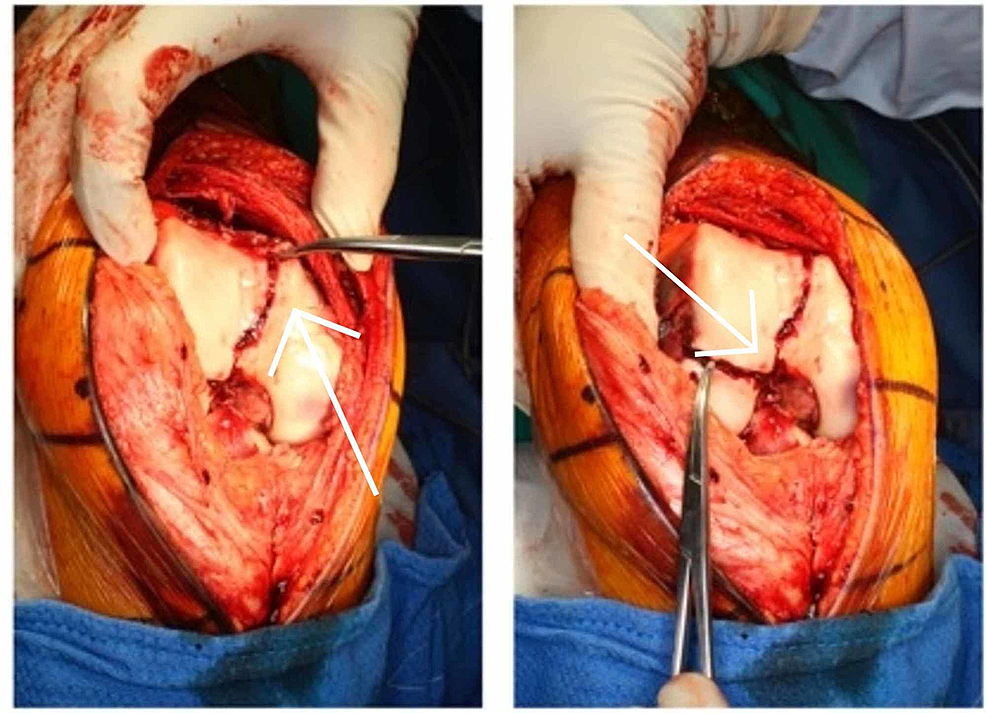 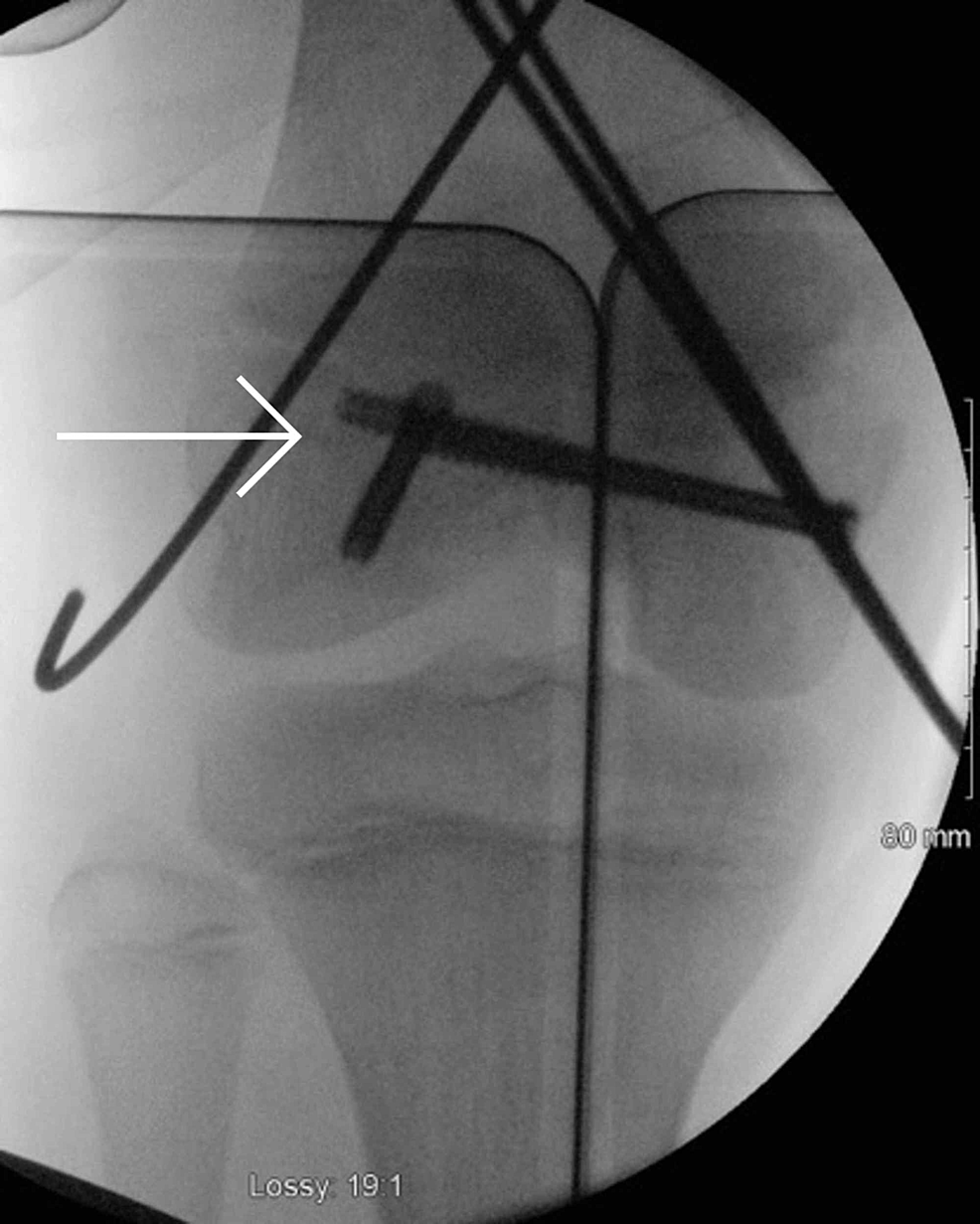 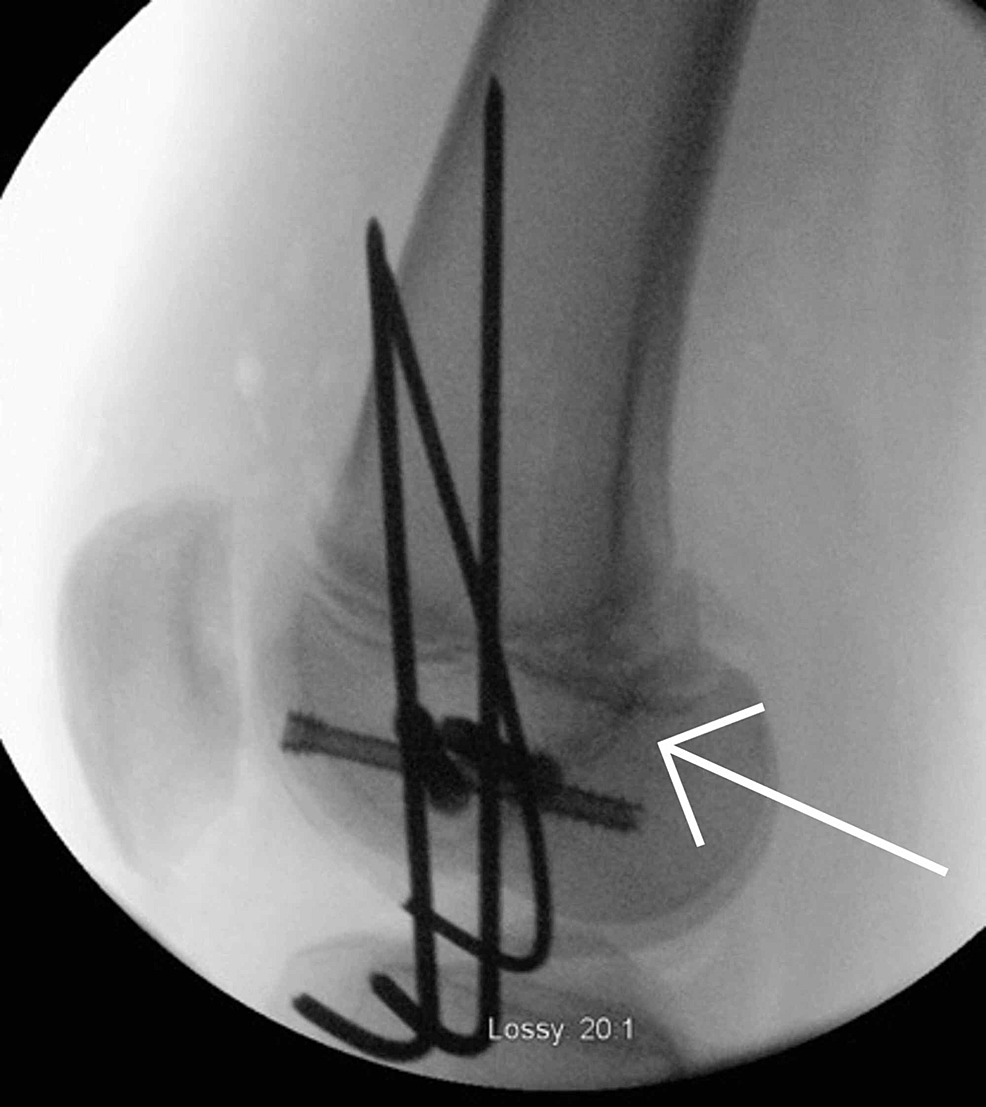 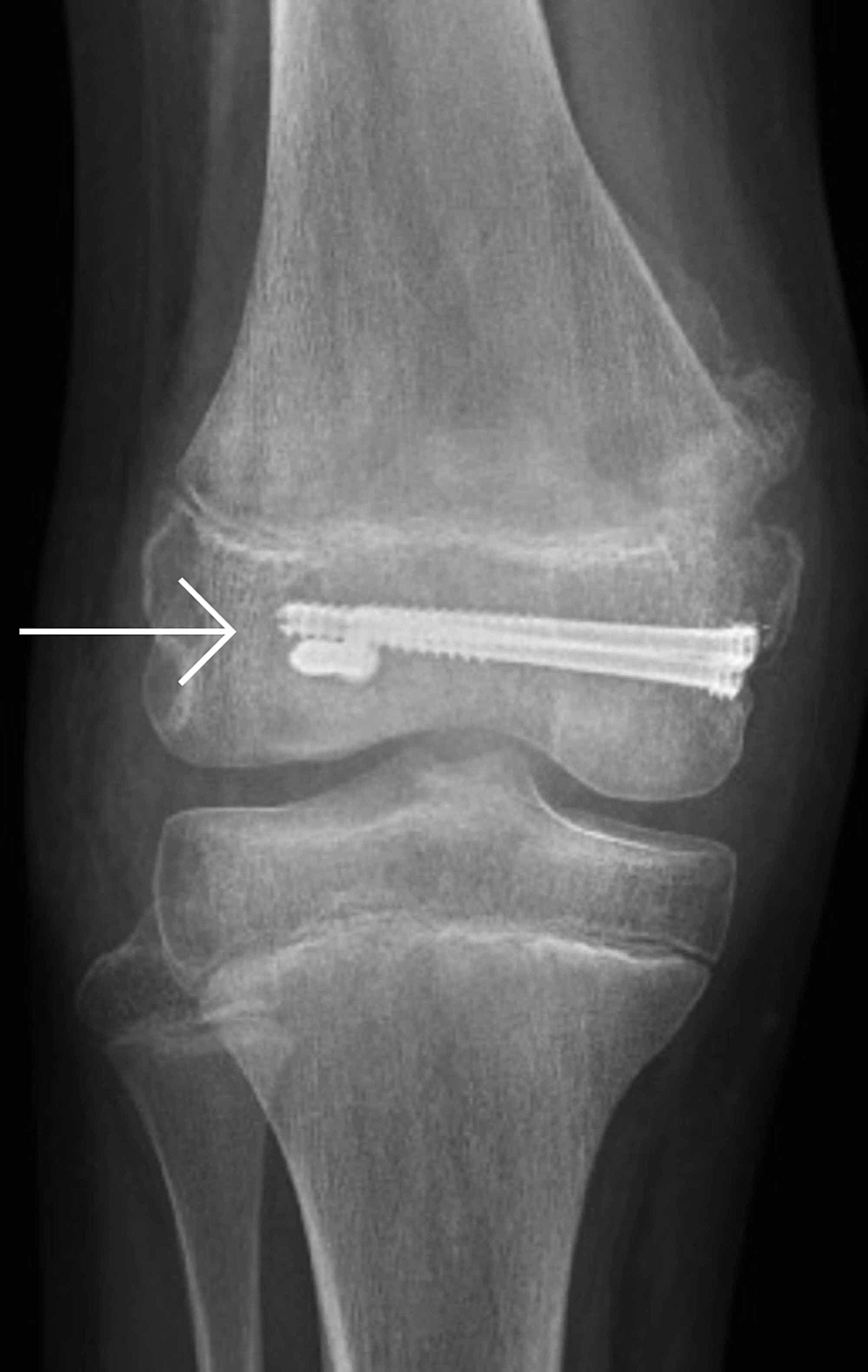 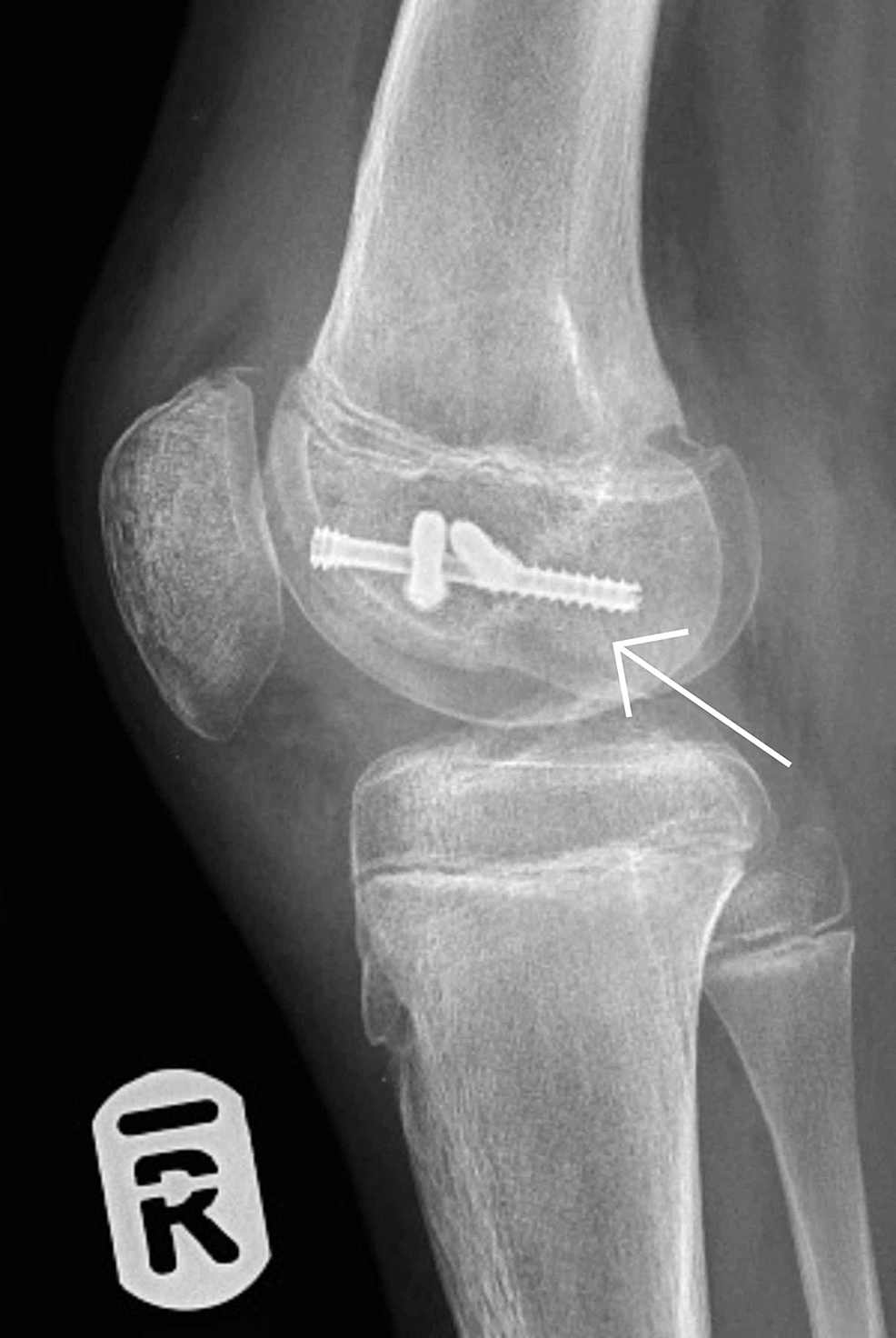 The patient was immobilized in a knee extension brace and kept non-weight bearing for four weeks post-operatively until the wires were removed. Once removed, weight-bearing and physio were commenced. The patient recovered from the injury without any initial post-operative complications. 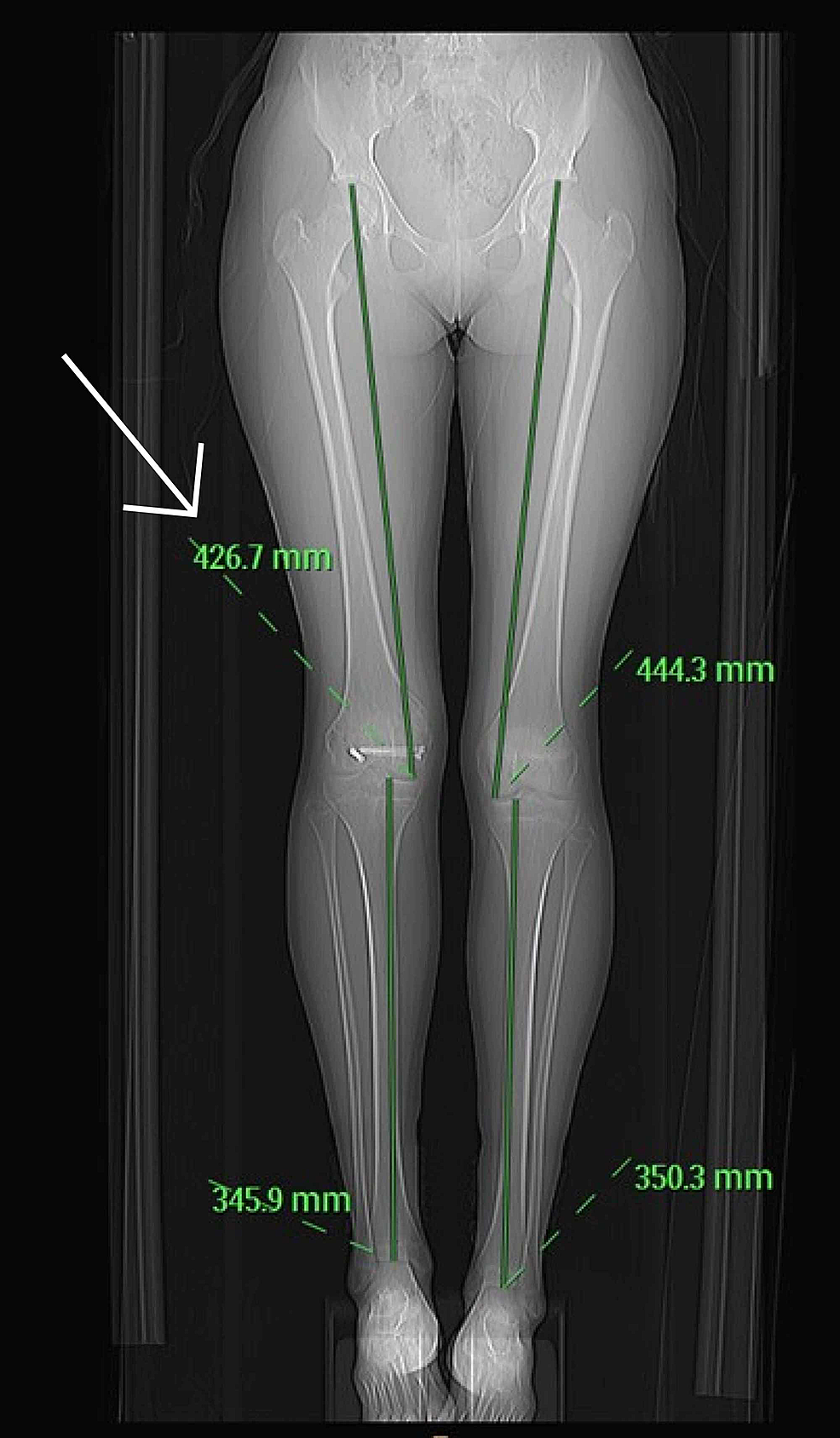 In March 2018, a left proximal tibia epiphysiodesis was performed due to the leg length discrepancy (Figure 16). An epiphysiodesis is used to attempt to stop any further growth from occurring at a growth plate by resecting the physical bar [17]. We performed this using a single incision technique and drilling multiple times in the anteroposterior direction across the growth plate of the proximal tibia. A curette was used to ensure the growth plate was completely removed. 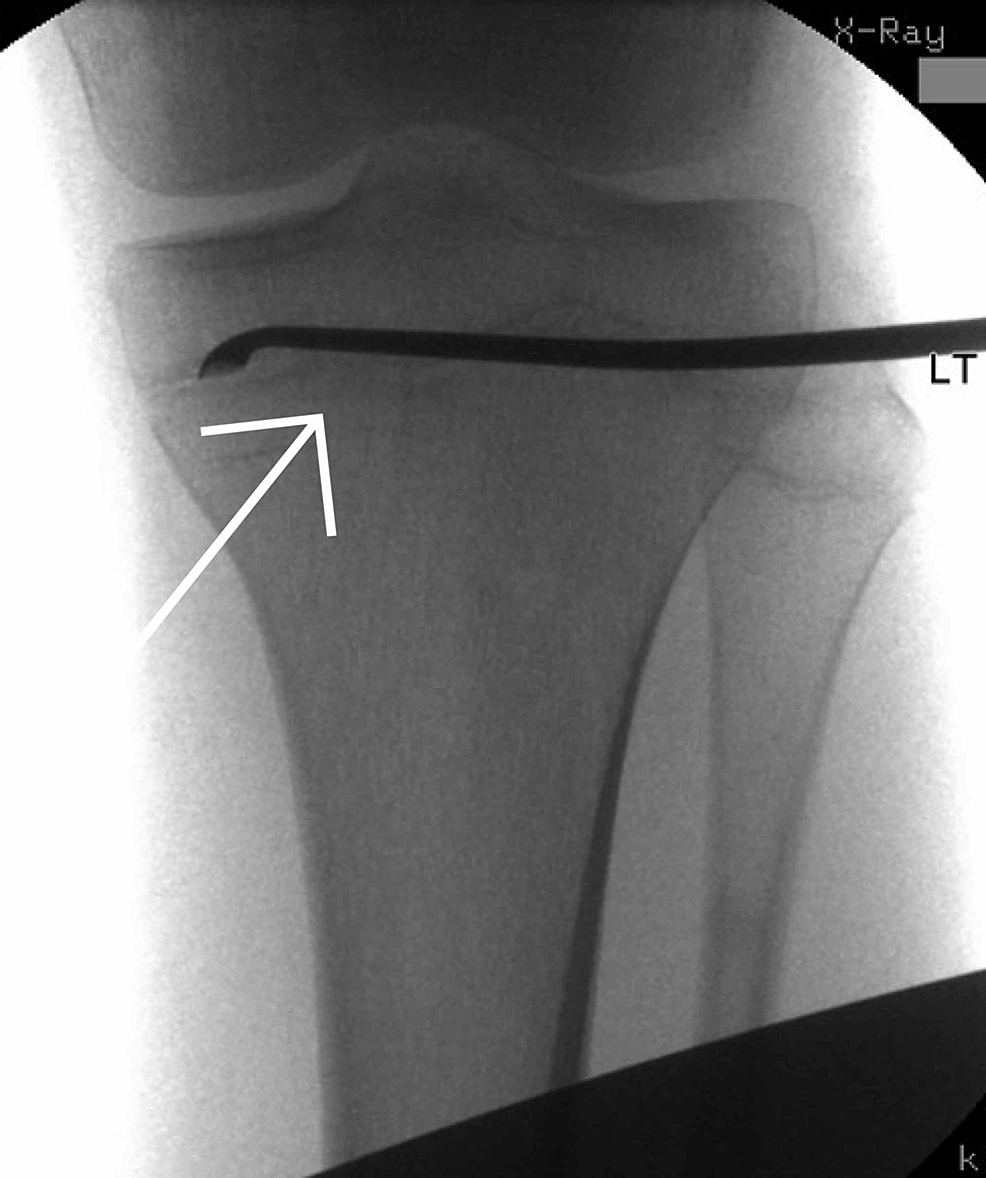 Triplane fractures of the distal femur in the paediatric population are rare, and the majority of trauma and orthopaedic surgeons are not expected to come across this injury throughout their careers. However, in the event that the surgeon does, he or she needs to be able to manage it adequately or else know when to refer.

Pre-operatively the surgeon must anticipate potential complications and address these with parents. A CT is recommended to plan surgery, and subsequent follow up is crucial to provide the child with the best possible outcome. Regarding the operative technique, it is essential to aim for as much anatomical reduction as possible.

The first documented case of a triplanar distal femur fracture in a child was by Gosselin [6]. This case was of a nine-year-old male who fell from a mango tree and presented to the hospital four to five weeks post-injury. His knee was in 85 degrees of flexion, and there were only a few degrees of active range of motion. The triplanar fracture was confirmed in the operating theatre, and a non-anatomical reduction was achieved and internally fixed with screws. Afterward, the knee had a passive arc of 10 to 90 degrees of motion. Residual growth potential was expected to be nil, and future problems such as pain, angular deformity, and/or leg length discrepancy were anticipated.

The second documented case was by Masquijo [15]. A 13-year-old boy presented after involvement in a motorcycle accident. He had a CT scan, which confirmed a triplanar fracture. He had a Salter-Harris type I fracture in the axial plane and a Salter-Harris type III fracture in the coronal and sagittal planes of the distal femur. An open procedure was performed with anatomical reduction. This was achieved in a stepwise manner restoring articular congruity and stabilizing the epiphyseal fragment before securing the epiphysis to the metaphyseal component. The first step was to reduce the coronal plane fracture, then secondly, the intercondylar fracture, and thirdly, the reduction of the epiphysis to the metaphysis. At two years of post-operative follow-up, this patient had a knee range of motion from 0-100 degrees. Scanogram revealed a 0.8 cm leg-length discrepancy. He actively participates in bicycle riding and swimming and resumes the same pre-injury activity level.

The third case is of an eight-year-old girl who was involved in a road traffic accident [4]. She presented with a flexed and painful right knee. Plain film x-ray identified a ‘chondro-epiphyseal fracture of the distal femur dislocated on the coronal plane of the lateral condyle of the right knee’. She was operated on overnight, and a triplanar fracture was identified intraoperatively. An anterolateral approach was performed with medial dislocation of the patella. The fracture was anatomically reduced, and two cannulated screws (5.5 mm) were used. The Hoffa fracture was deemed stable and not fixed. Post-operative follow up at seven years showed good radiographic outcomes (she had removal of the screws at another institution), and clinical examination revealed stability of the right knee with a complete and painless range of motion (-10 to 120 degrees).

Our case is an example of a rare triplaner femur fracture. We present pre-, peri- and post-operative images of the management of this rare injury. It is imperative to achieve anatomical reduction. CT scanning is recommended to diagnose and manage this injury appropriately. Post-operative follow up is crucial to managing this patient as a limb length discrepancy and/or a deformity is expected.

© Copyright 2020
Carroll et al. This is an open access article distributed under the terms of the Creative Commons Attribution License CC-BY 4.0., which permits unrestricted use, distribution, and reproduction in any medium, provided the original author and source are credited.