The aim of our study was to correlate liver function tests with serum ferritin levels in multi-transfused thalassemia patients.

This was a descriptive cross-sectional study conducted in the department of hematology, Khyber Medical University, from January 2018 to December 2018. Thalassemia patients of either sex dependent on transfusion ≥ 1 year and having a confirmatory report of the disease were included in our study. The nonprobability convenience sampling technique was used. The Pearson correlation coefficient was applied to observe the correlation between serum ferritin level and liver function tests. A p-value of ≤0.05 was considered statistically significant. SPSS version 23 (SPSS Inc., Chicago, Illinois) was used for data analysis.

Thalassemia is derived from the Greek words, Thalas, which means sea, and emia, which means blood, signifying that it is more common in the Mediterranean region [1]. Globally, among humans, thalassemia is the commonest single-gene disorder. It is defined as a group of inherited disorders characterized by decreased or absent beta globin chain synthesis, leading to a reduced level of hemoglobulin (Hb) in the red blood cells [2]. Specifically in developing countries, thalassemia is a huge health dilemma.

Blood transfusion is the primary way of treating thalassemia; it allows the normal growth of the child as well as restrains abnormal erythropoiesis [3]. Iron-chelating agents should be used properly; otherwise, multiple blood transfusions can lead to iron overload. Yet, with no blood transfusion, the increase rate of erythropoiesis intensifies dietary iron absorption from the gut, leading to a severe form of iron overload [4]. iron overload can result in serious damage to various organs, for example, by depositing in the liver, heart, and various other endocrine glands along with endocrine organ failure. Cardiotoxicity is the most severe and life-threatening complication of iron overload, which needs chelation therapy [5].

The liver is the only site for ferritin and transferrin synthesis, as well as the primary organ for iron storage. Under normal conditions, iron is protein-bound in the liver and free ferrous iron is severely toxic. In unbound form, iron catalyzes the production of free radicals, which has been implicated in lipid peroxidation as well as in hepatotoxicity [6].

The liver has the maximum capacity to store excess iron in the body, and various other organs, as well as the liver, are very susceptible to damage as a result of iron toxicity. In other studies, the correlation between serum ferritin and hepatic iron concentration has been reported in multiple blood-transfused thalassemia patients [7]. However, there is a paucity of data regarding the correlation between iron overload and liver damage in thalassemic patients. Hence, the objective of this study was to correlate liver function tests with serum ferritin levels in multi-transfused thalassemia patients. The results of this study will provide us with local statistics, and this will open a window for further research.

This was a descriptive cross-sectional study conducted in the department of hematology, Khyber Medical University, between January and December 2018. A total of 138 patients were recruited by using the World Health Organization (WHO) formula for sample size estimation. Participant’s selection was done on the basis of non-probability convenient sampling. Transfusion-dependent thalassemia patients, ages between six and 20 years of either gender having a confirmatory lab report of Hb electrophoresis were included in the study. While individuals already having any disease (e.g., hepatitis and hemochromatosis) or having acute illnesses, such as fever and infections, were excluded from the study.

Before starting the study, institutional ethical approval was taken. Patients were selected for the study based on inclusion and exclusion criteria. Consent was received and signed from all patients. Information was gathered on a planned proforma. The initial segment of the proforma comprised details about the age, sex, name, and address of the patient while the second part incorporated clinical introduction and examination. Three ml of blood was taken from the cases by needle puncture of peripheral veins. The blood was centrifuged at 4000 rpm for 10 minutes in a centrifuge using the Yingtai TD4C instrument (Changsha Yingtai Instrument Co., Ltd., Hunan, China ). The serum thus obtained was taken in two test tubes, one to be tested and one to be stored for future purposes. The serum was stored in serum cups at -35 degrees centigrade in a refrigerator by (Sanyo Biomedical Freezer MDF-U537; Sanyo Electric Co., Ltd., Osaka, Japan). 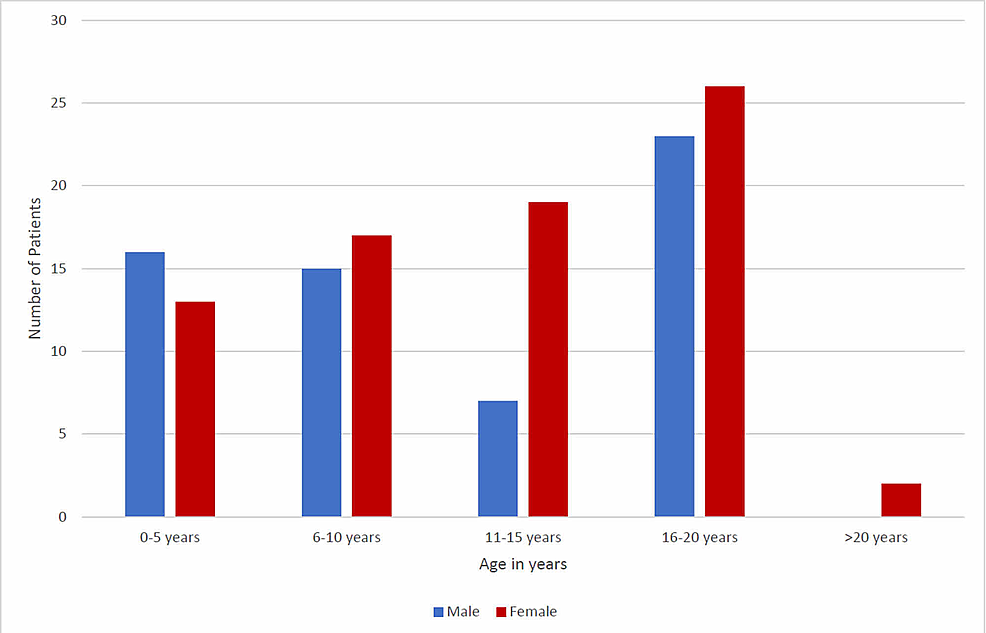 Table 2: Distributive statistics of parameters according to gender 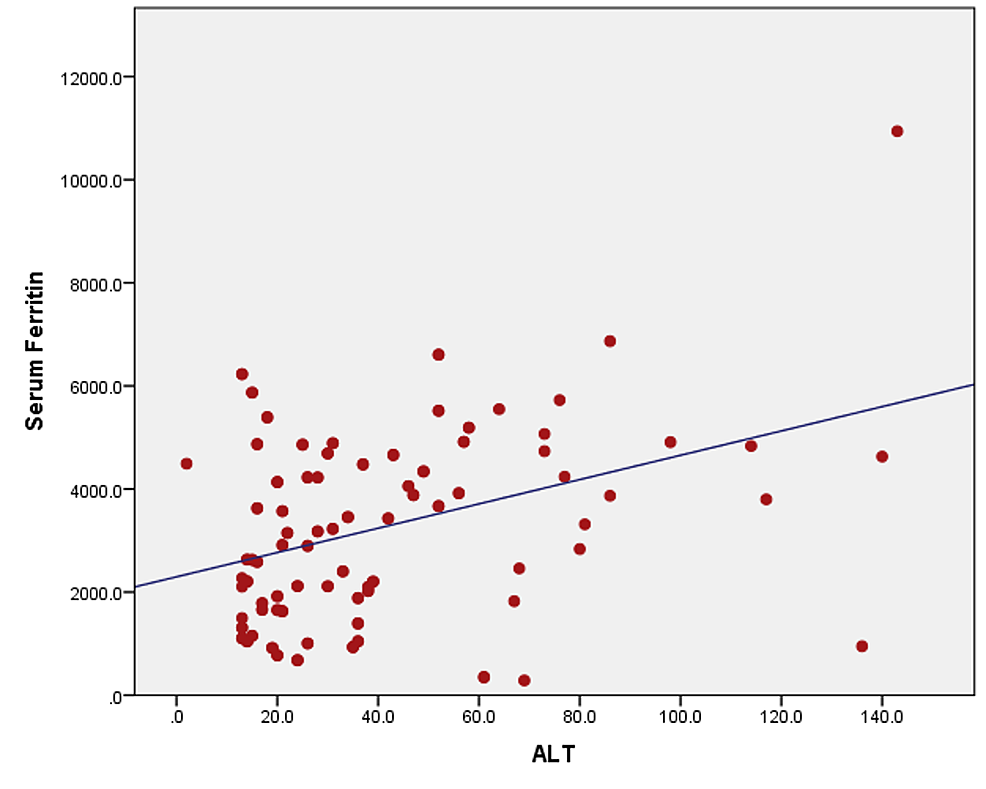 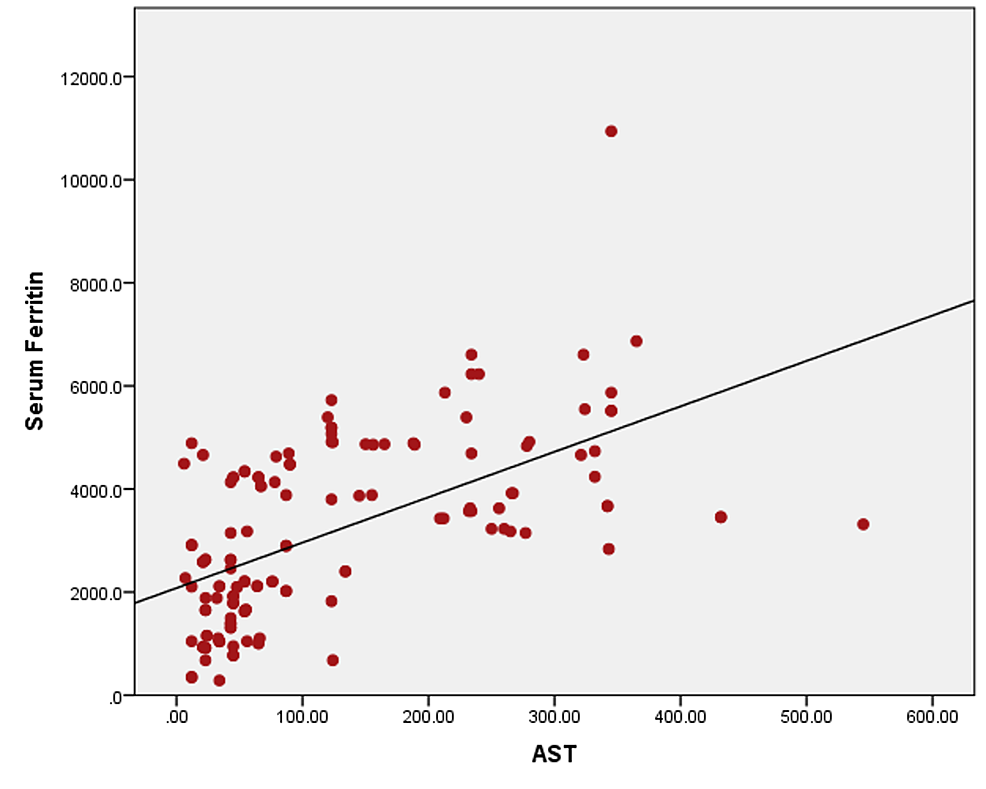 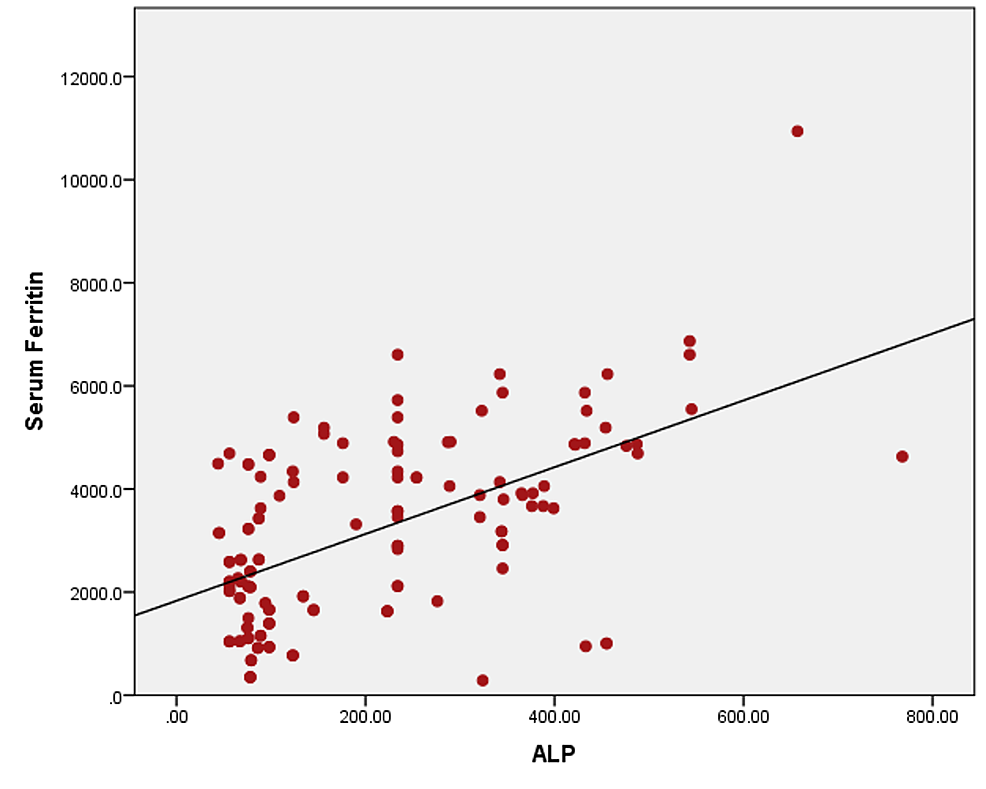 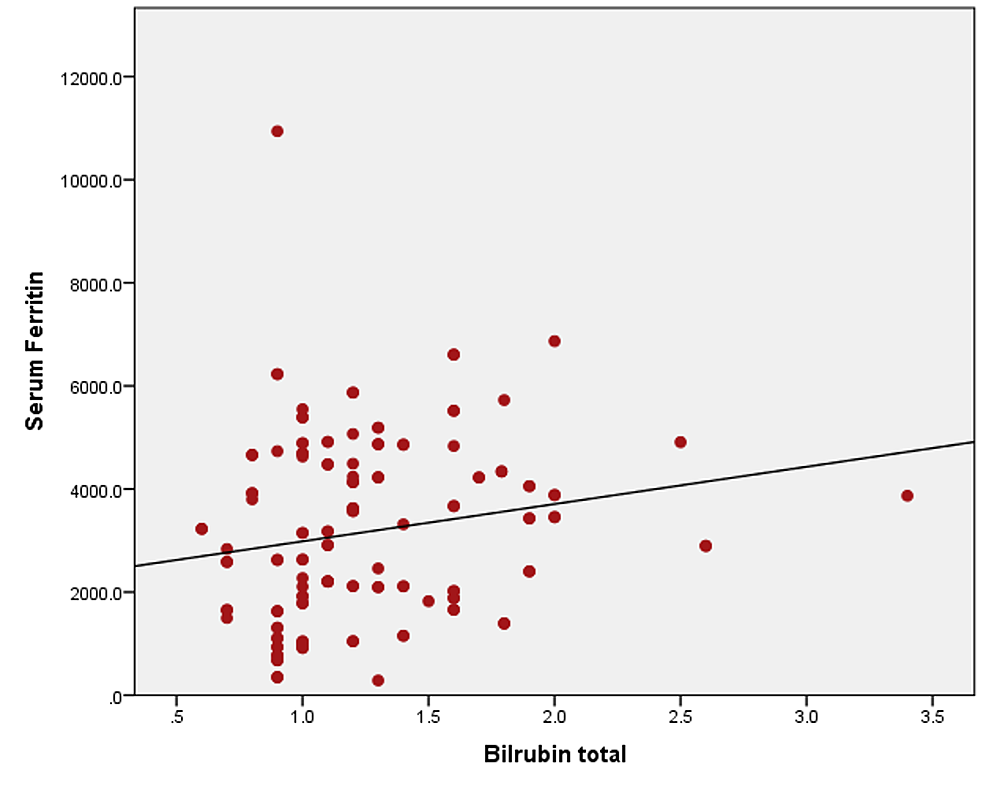 Studies done in the past have shown some correlation between liver function tests (LFTs) and serum ferritin, but the results varied in most of the studies. Our study aimed to find the correlation of LFTs and higher levels of serum ferritin in local thalassemia patients who are on regular blood transfusion and poorly chelated. Limited research has been done on this perspective.

The cause of thalassemia is mainly mutations that change the state of at least one globin gene. To date, around 200 point mutations and a few deletions on chromosome 11 have been seen in the β-globin gene [8]. The iron deposits of the body are kept in a range of 200-1500 mg ordinarily in people with a normal iron deposition of 5 mg/kg in ladies and 13 mg/kg in men [9]. Every unit of blood has around 200 mg of iron, yet this dimension gradually and progressively raises by continuous blood transfusions in thalassemia patients [10].

In the current study, the average serum ferritin level (3278.64 ± 1862.33) was considerably higher than its peak value (1000 ng/mL), showing that regularly transfused patients are in iron overload status. Besides, a few investigations showed the abnormal state of ALT in thalassemia patients receiving various blood transfusions [13]. Thus, we have likewise discovered raised levels of ALT in the present investigation. There was a positive correlation between serum ferritin level and ALT in our study population (r = + 0.39) and a p-value of <0.01. Hence, the results of this study are similar to different studies. Consequently, the reason tends to be that the abnormal amounts of hepatic catalysts are potentially because of the hepatic damage caused by the iron overburden in thalassemia patients accepting a different blood transfusion. A few other researchers have a similar perspective with respect to the abnormal state of hepatic enzymes in thalassemia patients [14-15]. In the current study, we have found the elevated levels of AST, ALP, and serum bilirubin as well. The results of the present study are thus concurrent with the results of other studies done by De Sanctis et al. [13].

Some analysts have depicted the proposed component of activity, however, the correct process is not clear as yet. Seng Suk et al. found liver functions to be three- to four-folds increased in β-thalassemia patients than normal individuals [16]. The iron deposition is associated with increased oxidative stress, lipid peroxidation, and liver cell damage in transfusion-dependent β-thalassemia major. Jensen et al. also observed that serum transaminases and hepatic fibrosis increases as liver iron concentration increases [17].

The liver is the earliest site of iron deposition in regularly transfused thalassemia patients and a common cause of morbidity. Iron overload occurs both in hepatocytes and reticuloendothelial cells. Free radical production is increased in patients with iron overload through the Fenton reaction. These free radicals accumulate in the liver, heart, and other organs cause extensive tissue damage and play havoc [18].

It was inferred that iron overburden is a principle driving reason for raised liver proteins and especially ALT, AST, and ALP. There was a positive correlation between serum ferritin and LFTs. Subsequently, further definite examinations ought to be led to investigate the real cause for this connection for this in the future and to discover the promising connections in thalassemia patients receiving numerous blood transfusions.

© Copyright 2020
Al-Moshary et al. This is an open access article distributed under the terms of the Creative Commons Attribution License CC-BY 4.0., which permits unrestricted use, distribution, and reproduction in any medium, provided the original author and source are credited.

Table 2: Distributive statistics of parameters according to gender