Results: There was no significance of WM kurtosis and skewness parameters among MS group and control group patients p=0.213 and p=0.390, respectively. In MS patients, kurtosis, skewness, maximum intensity, minimum intensity, and median intensity values of WM, Plaque 1, Plaque 2, and Plague 3 were significantly higher at p<0.0001 for all.

Conclusions: DKI may provide more extensive characterization of lesions and WM and may be a sensitive indicator of tissue damage and microstructural change in patients with MS in addition to conventional diffusional evaluations.

Multiple sclerosis (MS) is a chronic inflammatory demyelination disease of central nervous system. It may cause a prominent level of neurological disability in young adults and is identified by the formation of focal demyelinated plaques in the WM [1]. The myelin damage is the key component of MS pathogenesis. Focal plaques or the lesions are the primary focus for imaging myelin in MS, which appear bright on proton density and T2 weighted imaging [2]. In studies, myelin water fraction (MWF) is decreased differentially in MS lesions [3-4]. However, diffusion analysis of water molecules using MRI is a quantitative technique to obtain more specific microstructural information than conventional MRI.

Diffusion kurtosis imaging (DKI) is an imaging technique, which provides further information of non-Gaussian water diffusion behaviors, particularly in neural tissue, based on diffusion properties of water molecules [5]. DKI is an expansion of diffusion tensor imaging (DTI) where diffusion tensor is estimated together with a fourth order 3D kurtosis tensor. In theory, in the Gaussian diffusion model, the water molecules diffuse uniformly in a certain direction. In DTI the diffusion-weighted signal resembles a monoexponential decay as shown in Eq. (1).

Kapp: the kurtosis along a certain diffusion direction

S (b): the diffusion-weighted signal along that direction with a certain b value

The mean kurtosis (MK) corresponding to the diffusional kurtosis (DK) averaged over all gradient directions is shown in Eq. (3) [7].

The standard DTI metrics, such as apparent diffusion coefficient (ADC) and fractional anisotropy (FA) can be obtained by DKI. DK is not based on spatially oriented tissue structures and it allows us to evaluate both gray matter (GM) and WM simultaneously which is an advantage. Furthermore, crossing fiber tracts does not affect DKI differently from DTI [8].

Recently, studies have shown that DKI is useful to evaluate the microstructural environment of brain tissue [9-15]. In this study, we aim to evaluate diffusional changes on MS plaques by using DKI.

Institutional review board of Kocaeli University approved this study. Written informed consent was obtained from all participants.

A total of 52 consecutive patients (32 female and 20 male) participated in this study. Some 31 patients diagnosed with MS according to McDonald 2010 criteria [16] and 21 healthy controls with no known brain abnormalities and no neurological symptoms were included.

All MK maps and T2 FLAIR images were fused and controlled by a radiologist and a medical physicist, individually. The MS lesions and WM were outlined on T2 weighted images by using the free software Medical Image Processing, Analysis, and Visualizations (MIPAV) developed by the National Institutes of Health Center for Information Technology (CIT). Figure 1A shows MK images of WM for a control group and Figure 1B shows MK images of an MS patient. The MS plaques were delineated according to their size and brightness of T2 FLAIR images. Three largest MS plaques were assessed for each patient. The lesions with the highest size and brightness were determined as Plaque 1. Plaque 2 and Plaque 3 lesions were outlined according to decreasing size and brightness, respectively (please see Figure 2A-C). The delineated regions of interest (ROI) were automatically transferred onto the corresponding MK maps and the kurtosis, skewness, minimum intensity, maximum intensity, and median intensity values were measured. Skewness values are generated automatically via kurtosis values.

Figure 1: White matter images of a) control group patient and b) MS patient

Figure 2: MS lesions at different slices for different patients:  A) Plaque 1 and Plaque 2 B) Plaque 2 and C) Plaque 3.

There was no significance of WM kurtosis and skewness parameters among MS group and control group patients p=0.213 and p=0.390, respectively. These analyses are shown in Figure 3. 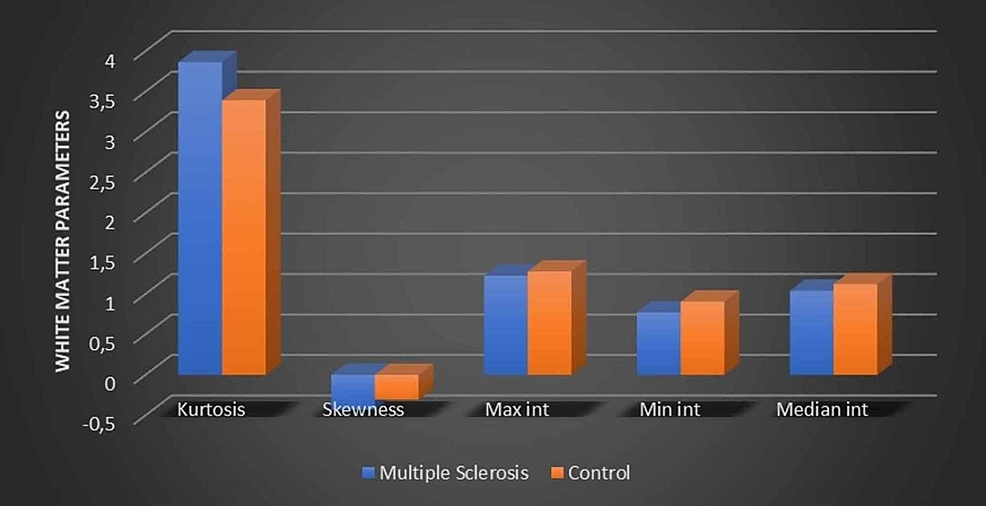 Figure 4 shows that MK values of WM are significantly higher than the MS plaques. 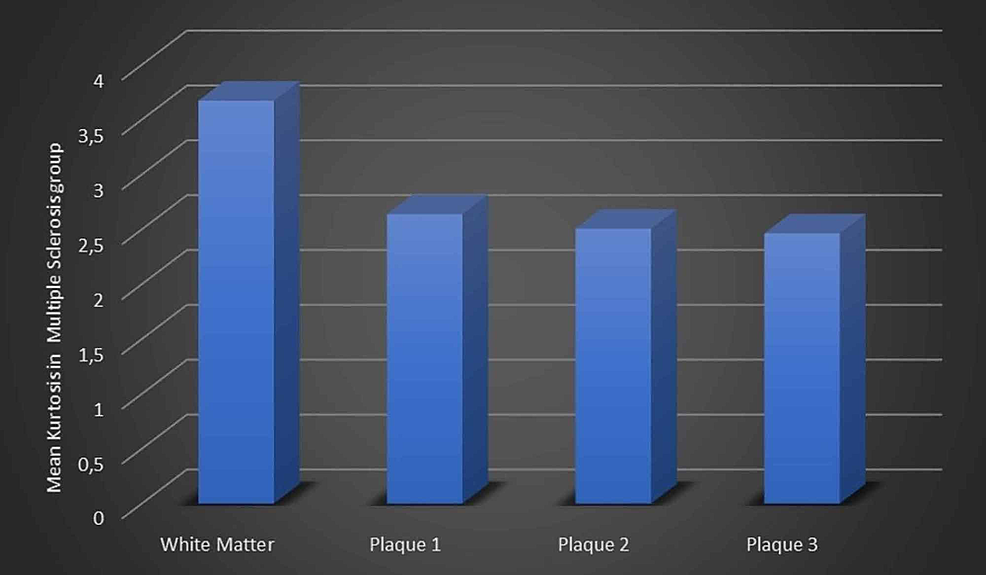 The diffusion of water in the brain is considered as Gaussian distribution in DTI, thereby the diffusional heterogeneity cannot be determined in biological tissues as the diffusion in brain is restricted by water compartments, barriers of cell membranes, myelin layers, organelles axon sheaths, etc. DKI which is a mathematical extension of DTI is able to quantify the non-Gaussian water diffusion behavior by providing additional and different diffusional metrics. Diffusion kurtosis does not base upon spatially oriented tissue structures that make it more advantageous than FA. Thus, DKI can be used as an indicator of microstructural complexity and used to examine abnormalities in tissues with isotropic structure such as GM and WM [18].

Our results showed that the biggest and brightest plaques give more significant differences. In MS group, MK of WM, Plaque 1, Plaque 2, and Plaque 3 were significantly higher at p<0.0001 which can be explained by that the decrease of kurtosis could be a sign of neuronal loss [19]. Unless there was no significance observed between WM in the control group and normal appearing white matter (NAWM) in MS group.

Yoshida et al. [20] showed that DKI was able to detect abnormalities in NAWM that could not be imaged by conventional MRI. In their study, a significant difference (p=0.002) between WM and NAWM on MK has been shown between six controls and 11 MS patients. In another study, Zhang et al. [21] showed that relative to normal tissue, MS plaques have increased diffusivity [axial (Dax), radial (Drad), and MD] but decreased kurtosis [axial (Kax), radial (Krad), and MK].

Diffusional kurtosis imaging is very sensitive to the effects of signal noise due to use of higher b values. In our study, we used five b values (0, 500, 1000, 1500, and 2000 s/mm2) and we had low resolution images due to high noise and low signal to noise ratio (SNR). The combination of b values can also be important to obtain proper DKI data due to the noise sensitivity and in future studies b value combinations for particular disease might be investigated. Furthermore, noise correction would be required for strong diffusion weightings.

Diffusional kurtosis imaging is a clinically feasible method that has the potential to provide new information on the brain tissue microstructure that is provided by conventional diffusion weighted imaging and DTI metrics. Future diffusion kurtosis imaging studies might include combination of neurological tests for MS lesion locations. Thus, disease progression at an early stage might be monitored through the use of DKI. More studies are needed to determine disease burden and disability.

© Copyright 2019
Sahin et al. This is an open access article distributed under the terms of the Creative Commons Attribution License CC-BY 3.0., which permits unrestricted use, distribution, and reproduction in any medium, provided the original author and source are credited.

Figure 1: White matter images of a) control group patient and b) MS patient

Figure 2: MS lesions at different slices for different patients:  A) Plaque 1 and Plaque 2 B) Plaque 2 and C) Plaque 3.