Cite this article as: Maduke T, Qureshi B, Goite Y, et al. (November 30, 2019) Monitoring the Use of Telemonitor: A Resident-run Quality Improvement Initiative Decreases Inappropriate Use of Telemonitor in a Community Hospital. Cureus 11(11): e6263. doi:10.7759/cureus.6263

Cardiac telemetry is an important tool to detect life-threatening conditions in hospitalized patients but is used widely and inappropriately. We sought to assess current usage and improve the appropriate use of telemetry in a community hospital.

In 2004, American Heart Association (AHA) released guidelines on the use of telemonitor, and divided them into three classes: class I (telemonitor use indicated), class II (telemonitor may be beneficial) and class III (telemonitor not indicated) [1]. Studies have shown that telemonitor is often overused and used inappropriately. The Choosing Wisely® campaign, an American Board of Internal Medicine (ABIM) foundation initiative aimed at reducing waste and unnecessary tests in healthcare, recommended the use of guidelines to improve appropriate use of telemonitor in patients outside of ICU. Inappropriate use of telemetry has been widely studied and has shown to negatively affect patient care [2]. It can increase length of stay, cause alarm fatigue among providers, impact patient satisfaction, impact admission rates and cause backup in the emergency department [3, 4]. It also adds extra cost to healthcare delivery [5]. The objective of this study was to evaluate the effectiveness of an educational intervention in reducing the inappropriate use of telemetry.

We used a retrospective study looking at inpatient records of 712 patients in a 493-bed community teaching hospital in St Louis, MO. Inclusion criteria consisted non-ICU patients admitted on the telemetry floor or on a medical floor with remote cardiac monitoring. We excluded patients younger than 18 years of age, ICU patients, prior admission to ICU before transfer to telemetry floor, obstetrics and gynecology patients. We reviewed patients’ chart who used cardiac monitor between January and March 2017 (pre-intervention) and December 2017 to February 2018 (post intervention). We selected patients who had cardiac monitoring ordered on admission and during admission. The study was approved by the hospital’s institutional review board (IRB).

The intervention involved educational sessions with the hospitalists, Internal Medicine residents, cardiologists, emergency department physicians and nurse practitioners on the AHA cardiac monitoring guideline criteria for when it is indicated, beneficial and where it is not indicated. Each hospitalist, nurse practitioner and resident also received pocket cards with the criteria listed for them to use as a quick reference to decide when to order telemetry. Educational sessions were conducted as small group conferences, and structured and predefined reminder sessions for all participants. These sessions were conducted from August to November, 2017 with multiple reminder/refresher sessions.

The primary outcome was appropriateness of use of telemetry monitor as determined by the 2004 AHA guidelines. Secondary outcomes included duration on telemetry, events detected on cardiac monitor, occurrence of significant clinical events and death. 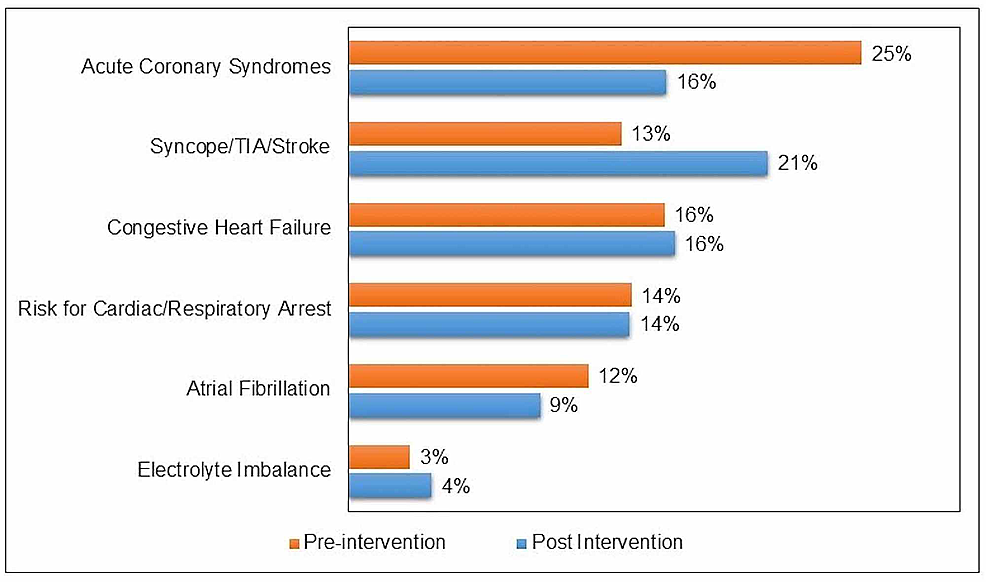 Use of telemonitor according to AHA indications 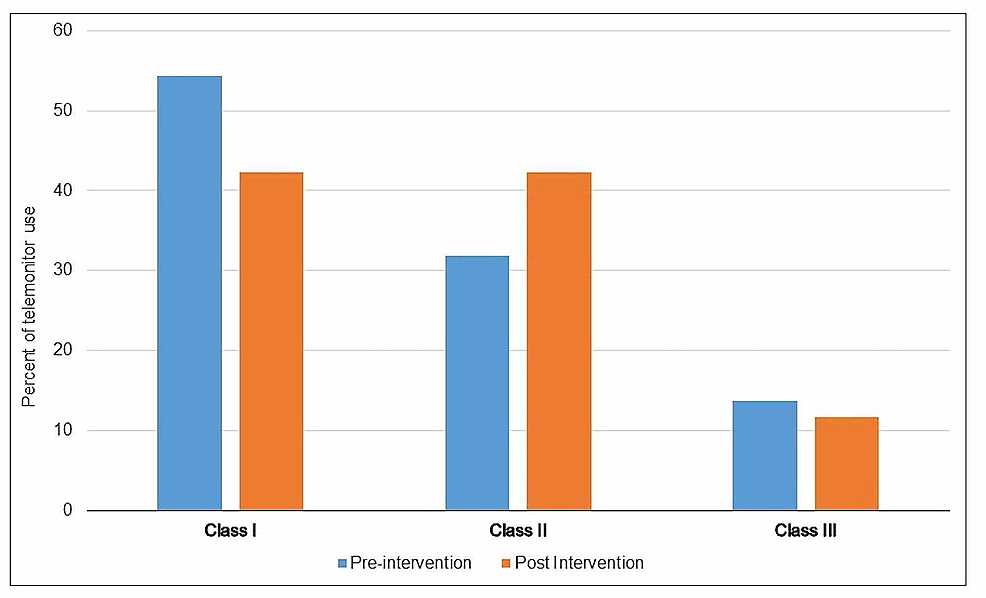 Figure 2: Use of telemonitor according to AHA indication (Class I: indicated, Class II: beneficial, and Class III: not indicated). 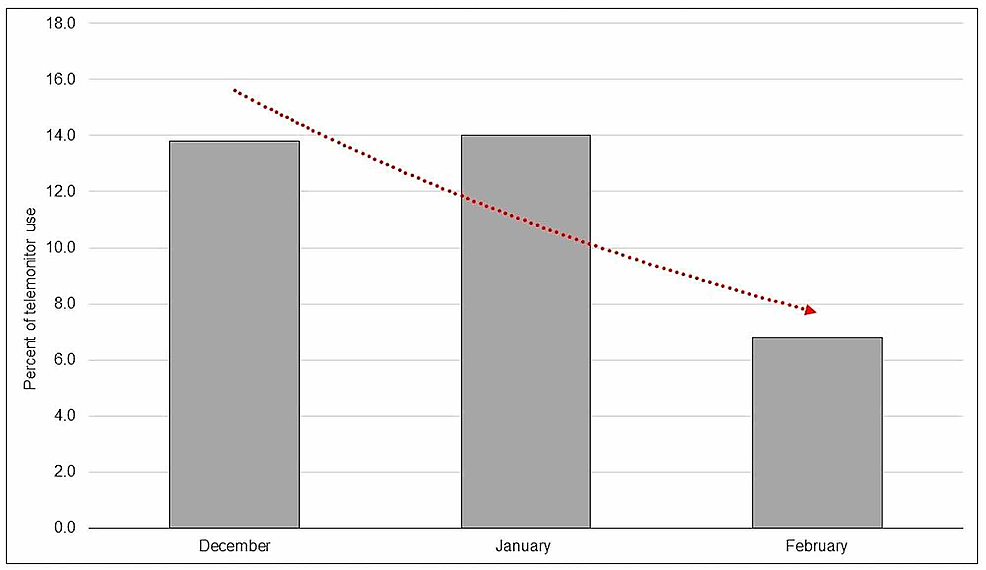 Figure 3: Declining trend of AHA class III (not indicated) use of telemetry in subsequent months in post-intervention period (trend line in red). 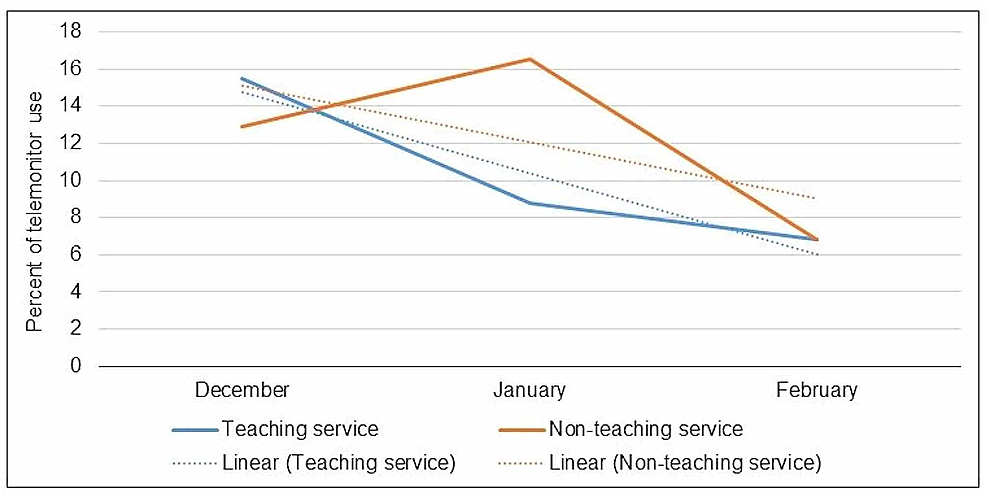 Figure 4: Trend of inappropriate use (AHA class III, not indicated) of telemonitor in teaching and non-teaching service.

In the pre-intervention group, 22 events (7% of the sample) were detected on the telemonitor. Of these, actions were taken on six events (27%). In the post intervention group, there were 13 events (4%), and actions were taken on four events (27%). Actions included changes, or starting new medications, cardioversion or transfer to the intensive care unit (ICU). The commonest events picked up on the telemonitor were atrial fibrillation, non-sustained ventricular tachycardia, atrial flutter, bradycardia, torsade de pointes, and multifocal atrial tachycardia (Figure 5). Two patients died in the pre-intervention group and one in the post-intervention group from non-cardiac causes. 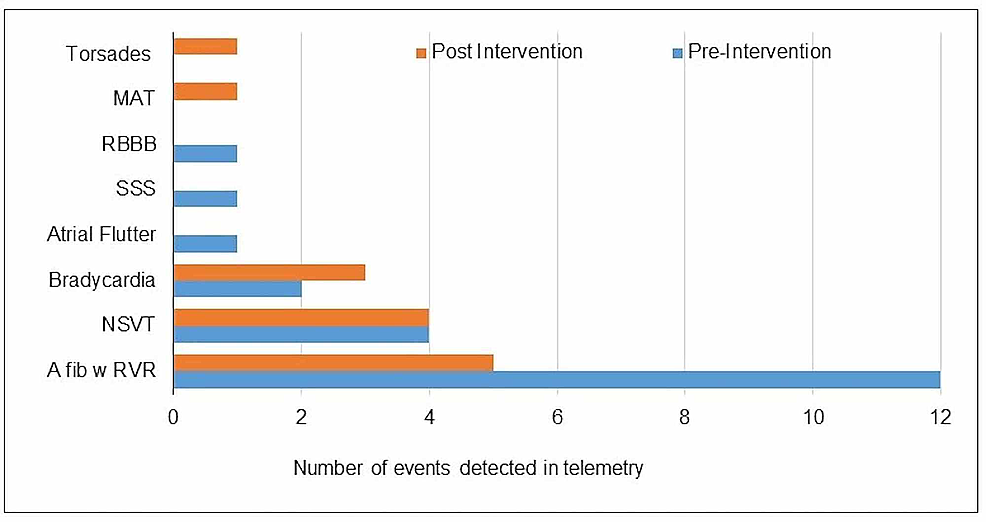 Reason for inappropriate telemetry use 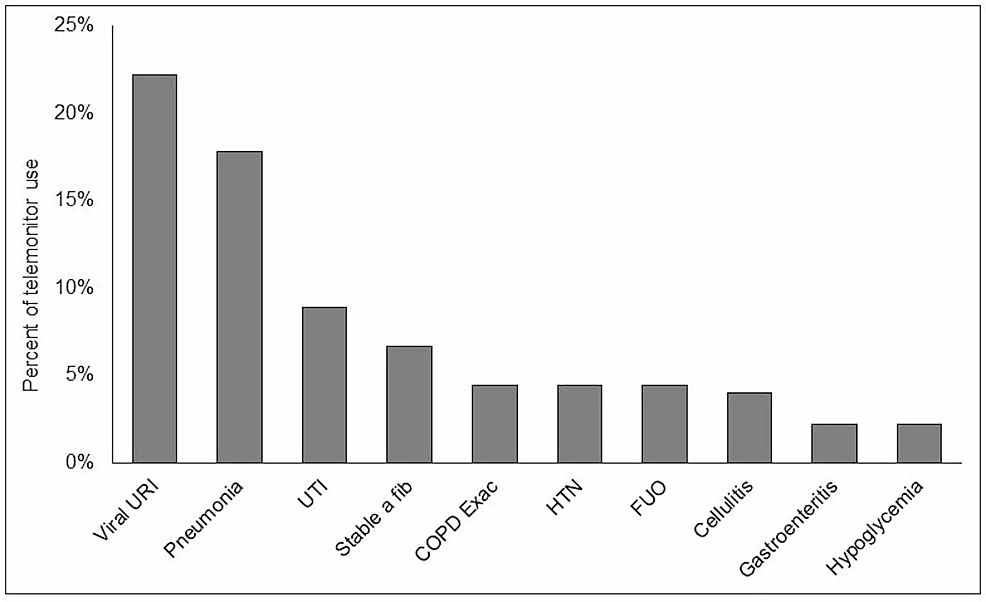 This resident-run quality improvement project highlighted a previously noted problem in the provision of telemetry use when it is not clinically indicated. The Society for Hospital Medicine has made reducing the unnecessary use of telemetry a top priority in the Choosing Wisely campaign. Our study showed inappropriate utilization of telemonitor ranges between 12%-14%. This at first glance may seem reasonable but is offset by the significant cost associated with this resource. Inappropriate telemetry use rate in our study is lower than those noted in other hospitals of similar size where it was as high as 20-30% [6]. The use of guideline-based interventions has shown promise in reducing the inappropriate use of telemetry [7]. This study’s design to use guidelines to order telemonitor showed some modest improvement in the appropriateness of telemonitor use, particularly in patients on the teaching service. It seems that involvement of residents in the intervention process was associated with greater improvement. The probable reasons for this improvement include increased enthusiasm in the project run by fellow residents, and keenness to learn new information and use it appropriately.

One key finding was that most patients who were admitted to the telemetry unit tended to stay on cardiac monitor regardless of resolution of the indication or having no indication at the outset. More than 90% of patients remained on telemetry throughout their admission. This signifies that once a patient is diagnosed with possible cardiac or neurological event, they are likely to be monitored with telemonitor throughout their hospitalization. The educational intervention did not result in a significant change in the telemonitor discontinuation rates. Further interventions likely need to be incorporated to remind providers of the need to discontinue telemetry at the earliest appropriate opportunity as clinically indicated. A study by Rizvi et al. showed that incorporating pop-ups in the electronic medical system for discontinuing telemetry reduced overuse of telemetry by 37% [8]. Such an intervention or the use of expiration dates with initial order of telemetry, which currently does not exist in our hospital, may be helpful in stopping telemetry when no longer indicated.

This study further illustrated that only few events were detected on telemetry, and an even smaller number of these events required change of management. Clinically significant events were only noted in 3-7% of patients and only a third of these events resulted in changes in medications or transfer to a higher level of care such as transfer to the intensive care unit. This low yield from telemetry and rare subsequent transfer to ICU has been documented in other studies [9-12]. Our results also showed the arrhythmias were detected only in the patients who had appropriate indication for use of telemetry, further reinforcing the need to restrict telemetry use in clinical- and guideline-directed indicated cases. Further exploration into incorporating an electronic order system, where providers indicate the reason for ordering telemetry, can result in further improvement in the ordering pattern. It appears that addressing this problem will likely require a multi-pronged approach, incorporating a sustained educational intervention, and indication-based electronic order system.

Analysis of the main reasons for inappropriate telemetry use showed that a significant proportion of patients had telemetry ordered for respiratory infections, chronic stable atrial fibrillation, urinary tract infections and exacerbations of obstructive lung disease. The median age of patients in our study was 77 years, and thus the concern for sick elderly patients likely prompted admission for closer observation with use of telemonitor. However, the yield of telemonitor use is typically low in such patients. A study of telemetry on geriatric patients with low risk for in-hospital coronary events showed that none of the patients admitted to telemetry developed clinically significant events [13].

Our study was limited in that the duration of post intervention evaluation period was short. Three months was likely not adequate to evaluate the sustained effect of the intervention. Determination of the appropriateness of telemetry use was based on what was documented in the charts. It is possible that the ordering providers may have had other reasons unclear to the chart reviewer(s) which possibly could have created a bias in the result. The sample size was also relatively small and possibly could have overestimated or underestimated the outcomes. Moreover, the retrospective nature of the study is vulnerable to selection bias. One of the limitations is that the study population was not homogeneous between pre- and post-intervention group. As a result, for class II indication, there was 105 (32%) patients in pre-intervention group and 162 (42%) patients in post-intervention group. This difference in sample size in two groups was significant, which might have affected the interpretation of data for class II indication. Nonetheless, this was a resident-run quality improvement project to increase awareness among house staffs as well as to improve guideline and evidence-based use of telemonitor in hospitalized patients.

Our results highlight that emphasizing guideline-based utilization of the telemonitor in non-ICU patients can aid in ensuring appropriate use of this resource. However, the effect of the educational campaign was modest and further studies with longer post-intervention follow-up and combining with electronic medical system interventions need to be assessed to see greater changes in ordering patterns of providers.

We would like to thank Dr. Fred Balis and the Residency Program of Internal Medicine for supporting this resident-run quality improvement project.

© Copyright 2019
Maduke et al. This is an open access article distributed under the terms of the Creative Commons Attribution License CC-BY 3.0., which permits unrestricted use, distribution, and reproduction in any medium, provided the original author and source are credited.

Figure 2: Use of telemonitor according to AHA indication (Class I: indicated, Class II: beneficial, and Class III: not indicated).

Figure 3: Declining trend of AHA class III (not indicated) use of telemetry in subsequent months in post-intervention period (trend line in red).

Figure 4: Trend of inappropriate use (AHA class III, not indicated) of telemonitor in teaching and non-teaching service.

Hypertensive Crisis: The Other Side of Polyarteritis Nodosa