Laparoscopic nephrectomy is a minimally invasive approach that demonstrates comparable oncological outcomes to traditional open nephrectomy and provides significant benefits to the patient, including a reduced analgesic requirement and shorter recovery time [1]. The popularity of laparoscopy has rapidly increased; it is now the most performed technique among radical nephrectomies in the United Kingdom (UK) [2].

Here, we describe a case of radical nephrectomy in a patient with multiple previous abdominal surgeries in whom a small bowel injury occurred while undergoing the procedure. We also review the available evidence and describe risk factors and techniques to reduce the risk of injury during laparoscopic port-site placement in patients undergoing nephrectomy with a history of abdominal surgery.

A 62-year-old man had an incidental finding of a right renal mass on CT consistent with renal cell carcinoma (RCC). The patient had been under CT surveillance for his previous bowel cancer, and on review of imaging, the lesion was found to have been present for two years. During that time, it had increased from 2.7 to 4.1 cm (Figure 1). 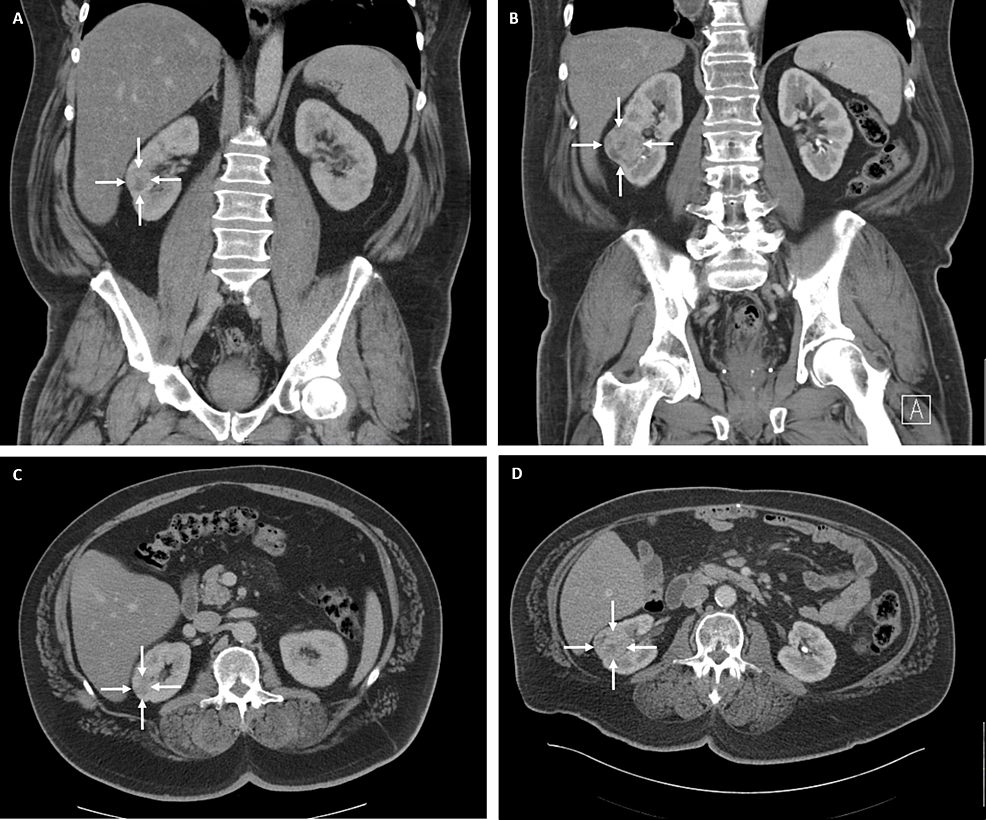 He had normal renal function with a creatinine of 75 μmol/L and an estimated glomerular filtration rate greater than 90 mL/min/1.73m2. The patient had an extensive past medical history. He had undergone an open sigmoid colectomy and adjuvant chemotherapy for adenocarcinoma of the sigmoid (T3, N2, M0) five years ago. One-year prior, he had been treated with neoadjuvant chemotherapy followed by an Ivor Lewis esophagectomy for mucinous adenocarcinoma of the esophagus (T3, N1, M0). He was also on hormonal treatment with a luteinizing hormone-releasing hormone analog for Gleason 4+5 prostate cancer with a presenting prostate-specific antigen (PSA) of 59 ng/mL. His PSA level was stable on treatment with a reading of 0.34 ng/mL. In addition, he was a recurrent stone former and had been treated on multiple occasions with ureteroscopy and laser stone fragmentation.

An attempt made to insert a laparoscopic port, using Hasson's technique, was immediately met with difficulty due to adhesions. The procedure was converted to open using a loin approach, and a right radical nephrectomy was performed.

The patient was initially well but was found to have a rising C-reactive protein (CRP) level on postoperative day three, subsequently followed by spiking temperatures. He had an urgent CT scan, which suggested a bowel perforation with multiple abdominal and pelvic collections. The patient returned to the operating theater the same day for an emergency laparotomy. He was found to have two perforations of the small bowel consistent with injury from the insertion of a laparoscopic port. Small bowel resection and primary anastomosis were performed. Following this, he made a good recovery with no further complications and was soon discharged.

Postoperative histology of the kidney showed a G2 pT1a clear cell RCC with clear surgical margins. At a six-week follow-up, he remained well and pain-free. At two months, he presented with left loin pain and was found to have an 11-mm stone at the pelvi-ureteric junction in his solitary left kidney, causing an obstruction and an acute kidney injury. This was treated with emergency ureteric stent insertion followed by ureteroscopy and laser stone fragmentation.

Six months following his nephrectomy, the patient remains well and stone-free with no evidence of recurrence or metastatic disease. Given his history of multiple malignancies, he has also been referred for genetic assessment.

In addition to tumor size, there are several other factors to consider in determining if a partial or radical nephrectomy is more suitable: the function of the contralateral kidney, whether the tumor is exophytic (protruding out) or endophytic (contained), the involvement of the collecting system, and the involvement of the renal hila (The R.E.N.A.L. nephrometry score) (Table 1).

Although not widely used in the UK, The R.E.N.A.L. nephrometry score was developed to assess the complexity of a tumor based on several of these factors [8]. Although there is no clear evidence as to what score would indicate a preference for radical nephrectomy, it can be a helpful tool when counseling a patient about their options. Using the R.E.N.A.L. nephrometry score in this case, the tumor would be classified as having intermediate complexity associated with a major complication rate for partial nephrectomy of 11.1% [9]. With the anticipated difficulties relating to the patient’s previous abdominal surgery, radical nephrectomy was the preferred option.

Previous abdominal surgery results in the formation of adhesions, abnormal fibrous bands between organs and/or the abdominal wall, in more than 90% of patients [10]. As in this case, adhesions can make laparoscopic surgery technically difficult and increase the risk of complications related to port-site placement. The impact of previous abdominal surgery in non-urological laparoscopic procedures has been extensively reviewed [11]. However, few studies have evaluated the outcomes of urological laparoscopic procedures such as nephrectomy.

Comparisons of the two approaches have consistently demonstrated a decreased operative time with a retroperitoneal approach (as there is no need to mobilize the colon using this approach) but no difference in overall oncological outcomes [13]. There are no guidelines as to which approach is preferable as both have their advantages and limitations. Generally, a surgeon’s experience and training will determine their approach to laparoscopic nephrectomy. In the UK, the BAUS nephrectomy audit showed a preference for the transperitoneal approach; this may due to the larger working space and familiar anatomical landmarks [14].

Historically, previous abdominal surgery was viewed as a relative contraindication to laparoscopy. It was thought to be technically difficult in addition to offering an increased risk of complications as a result of adhesions [15]. However, it is no longer deemed a contraindication with appropriate surgical training, planning, and technique. When considering patients with previous abdominal surgery for laparoscopic nephrectomy, it has been suggested that a retroperitoneal approach would prevent adhesion-related difficulties [16]. This is potentially supported by this case in which a transperitoneal approach was attempted and a bowel injury was encountered. However, other studies have demonstrated no significant difference between the two techniques in terms of technical difficulty, blood loss, or complication rate in patients with a history of abdominal surgery [17].

These findings, although they are derived from small studies, indicate that there is currently no evidence to promote either a retroperitoneal or transperitoneal approach as a comparatively safer option in laparoscopic nephrectomy after previous surgery. A further evaluation, specifically based on the site of previous surgery, is required. To limit bias related to surgical experience, a large multi-institutional prospective study would be required. Such a study would also need to consider other factors that may influence the development of adhesions, such as abdominal radiotherapy and inflammatory conditions like endometriosis [10]. Also, comparisons are required between patients with a history of a single previous abdominal surgery and multiple surgeries. In this case, the patient had previously had two extensive surgeries, which may have increased the risk further. However, there is currently no evidence in the literature to endorse this.

The method of port placement is also an important consideration for patients with previous abdominal surgery. Port placement can be achieved using the Veress needle or open Hasson technique. The Veress needle involves blind port insertion as compared to the open Hasson technique in which the peritoneum is opened under direct visualization before placing the port into the intraperitoneal cavity. The safest technique for port insertion is a topic of great debate. The evidence suggests that, when performed by an appropriately trained surgeon, there is no significant difference in complication rate between the techniques [19]. However, in patients with a history of previous abdominal surgery, it is widely reported that there is an increased risk of complications if a Veress needle is used [20]. This is a logical finding given the likelihood of adhesions to the abdominal wall in such patients. Hence, an open Hasson technique must be recommended for patients with a history of previous abdominal surgery. Even in open Hasson techniques, the surgeon must be cautious of adhesions and the risk of bowel injury, as happened in this case. This highlights the importance of appropriate patient counseling specific to their risks.

Our study examined a case of attempted transperitoneal right laparoscopic nephrectomy in a patient with a history of sigmoid colectomy and Ivor Lewis esophagectomy. The patient had significant adhesions and sustained a small bowel injury. The current evidence suggests that laparoscopic nephrectomy could be safely performed in patients with previous surgery but requires careful evaluation to identify specific risk factors such as the site of previous surgery. Also, an open Hasson technique should be recommended for laparoscopic port-site placement in such patients. Laparoscopic radical nephrectomy can be safely performed in these patients by using a multidisciplinary team approach that considers specific patient and tumor factors. However, as demonstrated in this case, patients are still at risk and must undergo appropriate preoperative counseling.

© Copyright 2020
Breish et al. This is an open access article distributed under the terms of the Creative Commons Attribution License CC-BY 4.0., which permits unrestricted use, distribution, and reproduction in any medium, provided the original author and source are credited.

Ischemia of the Penis and Fingertips Secondary to Calcifying Uremic Arteriol ...

An Unusual Form of a Trichobezoar Causing a Peculiar Case of Appendicitis: A ...

Correlation Between Oncotype DX, PREDICT and the Nottingham Prognostic Index ...

The Genitourinary Syndrome of Menopause: An Overview of the Recent Data