Background: Youth in juvenile detention centers are at a high risk for sexually transmitted disease (STD). The current study assesses the trends of chlamydia and gonorrhea (GC) infections and treatment among females within a single county’s juvenile correctional facilities.

Methods: This is a retrospective review of aggregate data of female adolescents between 12 and 18 years old who underwent STD screening from 2009 to 2016 in San Bernardino County.

Conclusions: Chlamydia and GC infections among female adolescents discovered during routine screening upon booking into a county juvenile detention system increased over the study time period. Effective collaboration between public health and various community organizations is needed to improve awareness and prevention of STDs amongst at-risk adolescents.

Chlamydia trachomatis (CT) is the most commonly diagnosed sexually transmitted disease (STD) among adolescents incarcerated in juvenile correctional facilities in the United States [1]. The prevalence of CT infections within the past decade among incarcerated adolescents exceeds 14% for females and 6% for males [1,2]. Similarly, the rates of gonorrhea (GC) infections among incarcerated adolescents was reported at 4.2% for females and 1.6% for males under 20 years of age [3]. Detained youth may not have access to contraception or education on risky sexual behavior outside of the correctional facility, and may be more likely to engage in risky sexual behaviors, resulting in the increase of CT and GC infections. Furthermore, discrepancies may exist between self-reporting of sexual behavior and findings from laboratory testing [4]. These factors suggest the importance of universal screening amongst juvenile detainees in order to provide the most accurate representation of STD infections within the juvenile correctional system.

The Centers for Disease Control and Prevention (CDC) made nationwide recommendations for universal CT and GC screening in correctional facilities upon intake for females <35 years old and males <30 years old [5]. California initiated the state-funded Chlamydia Screening Project (CLaSP) in 2002 at selected institutions with an aim to increase CT screening and timeliness of treatment among incarcerated youth [6]. Timeliness of screening is important to ensure that all detained adolescents are screened before they are released from the correctional facilities [7]. Screening programs typically include prevention and disease education. Wiehe et al. found that youth with follow up of one year post-detection had not been re-infected, which suggests that STD screening may have a lasting benefit to the communities into which the detained youth are released [8].

Burghardt et al. recently reported a significant decreasing trend of CT infections upon booking under CLaSP within several California juvenile correctional facilities [9]. In addition, Barry et al. indicated that there were higher rates of STDs within the female detainee population than the male detainee population, and thus should be given priority in screening [10,11]. In light of conflicting reports, the current study aims to assess the rate of CT and GC infections at the time of booking among female adolescents in juvenile correctional facilities located in San Bernardino County, California.

STD screening was conducted via universal CT and GC urine nucleic acid amplification-based testing. Patients reserved the right to refuse testing and minor consent for medical care was carried out in accordance with the California Family Code, Section 6926. All statistical analyses were conducted using the SAS software for Windows version 9.3 (SAS Institute Inc., Cary, North Carolina). Descriptive statistics were presented as frequencies and proportions. Cochran-Armitage tests were conducted to assess the trend of positive screening and treatment. All statistical analyses were two-sided and p-values less than 0.05 were considered to be statistically significant. 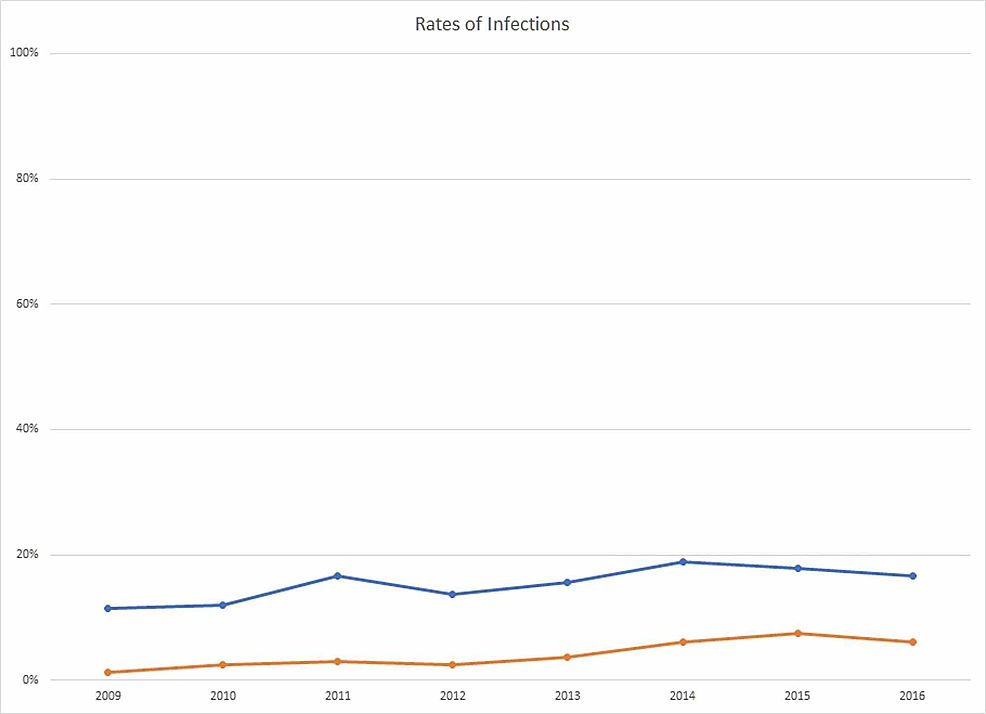 Figure 1: Rates of Chlamydia trachomatis and GC infections in female adolescent juveniles from 2009 to 2016 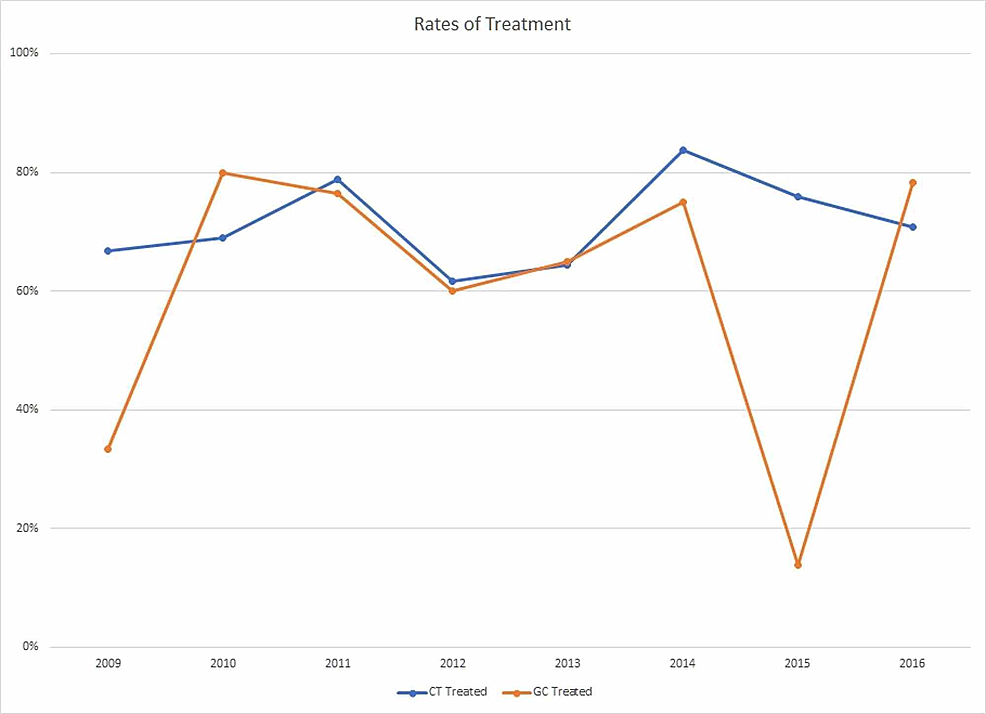 Figure 2: Rate of Chlamydia trachomatis and GC treatment in female adolescent juveniles from 2009 to 2016

The current study demonstrates a progressive increasing trend of both CT and GC infections upon booking of female adolescents within the San Bernardino County juvenile detention system. In contrast, a recent study by Burghardt et al. noted a decreasing trend of CT infections among incarcerated female juveniles since the implementation of a CT screening program (CLaSP) in California [9]. Despite the overall statewide success of CLaSP, this study suggests that San Bernardino County infection rates are in contrast to previously reported patterns.

The reason for the increasing prevalence of both CT and GC in adolescent female juveniles in San Bernardino county is likely multifactorial, but may be related to rapid release from the detention center and failure of linkage programs to allow for notification and treatment of infected adolescents. Belenko et al. emphasize the importance of timeliness of screening and also the importance of expanding access to risk reduction and STD prevention programs after release from correctional facilities [7]. We found the number of female adolescent juveniles released prior to notification and treatment of either CT or GC varied from year to year. In the current protocol in San Bernardino County, adolescents released prior to a positive result, which could take seven to twelve days, are notified of their result via a direct call by nursing staff and encouraged to seek treatment. All CT and GC positive cases were reported to the Department of Public Health, but the opportunity for adequate follow-up care may be limited by resource availability. Additionally, most correctional screening programs do not have a linkage pathway to establish care at a community health clinic. As a result, CT and GC positive youth released back into their community are frequently untreated and must independently seek adequate treatment. While county correctional facilities have recognized the importance of timeliness in incorporating screening upon booking, they have yet to fully utilize partnerships to expand access to complimentary programs post release. Another targeted area for collaboration may be community women’s health clinics, which could provide more focused treatment for STDs, education on prevention and potential long-term health risks, and access to a wider range of contraceptive options. Although there are currently some partnerships for re-entry between juvenile correctional facilities and community organizations, there exists an opportunity to expand upon such collaborations and specifically improve access to treatment of STDs within the surrounding communities.

Due to the retrospective design, our study has several limitations. It is possible that some positive screening tests were repeats due to recidivism, both without treatment or with treatment but subsequent reinfection. However, repeat positive results are estimated to make up only 1.6% of positive results and thus are unlikely to skew our findings. Additionally, there was a significant decrease observed in the rate of treatment for adolescents who tested positive for GC in 2015, which may have stemmed from a variety of factors, such as a change in budget allocation, errors in reporting, early release programs, or delayed treatment due to notification following release. Another limitation of the current study is that raw data were collected in an aggregate format and thus we are unable to determine subject level differences such as age, race, or ethnicity disparities.

The disease burden of STDs within the juvenile population is relatively large and costly, with juveniles accounting for nearly 60% of STD cases in San Bernardino County in 2016 [12,13]. While screening programs may seem costly (median cost of $708 per treated individual), the cost-effectiveness over time will likely mitigate initial start-up costs [9,12]. Incorporating screening into the initial medical exam upon booking has been shown to reduce the STD disease burden [14]. Though there are proposed cuts to prevention programs such as CLaSP, such cuts could potentially result in an overall increased cost to government funds, doubling even that of the value of the proposed budget cut [15]. These programs present an opportunity for at-risk youth to receive testing, notification of infection, and medical care which they otherwise would not have access to outside of the correctional system.

Female juveniles account for a significant percentage of the sexually transmitted disease burden due to a number of different factors, including young age which can result in risky behaviors and a disproportionate lack of access to medical resources. Female detainees are also at an increased risk of reinfection due to factors such as infected partners, lack of access to treatment, and proper contraception. Additionally, there is always a risk of treatment failure, particularly if there is a lack of continuity in medical care [15,16]. Sexually transmitted disease may also have significant long-term impacts upon women’s health within the community, including long-term gynecological effects such as pelvic inflammatory disease (PID), infertility, and ectopic pregnancy [17]. These long term impacts can be alleviated with appropriate counseling of STDs and risk reduction programs which have been shown to decrease juvenile STD rates and improve prevention behaviors [12,18].

The persistent high infection rates within the juvenile justice system emphasize the importance of broad screening practices and adequate treatment coverage for chlamydia and GC infections among female adolescents. Additionally, more collaboration between correctional facilities, the public health department, and linkage programs to community medical clinics is needed to improve access to treatment and further ease the burden of STD infection among this vulnerable population.

© Copyright 2020
Neeki et al. This is an open access article distributed under the terms of the Creative Commons Attribution License CC-BY 4.0., which permits unrestricted use, distribution, and reproduction in any medium, provided the original author and source are credited.

Figure 1: Rates of Chlamydia trachomatis and GC infections in female adolescent juveniles from 2009 to 2016

Figure 2: Rate of Chlamydia trachomatis and GC treatment in female adolescent juveniles from 2009 to 2016